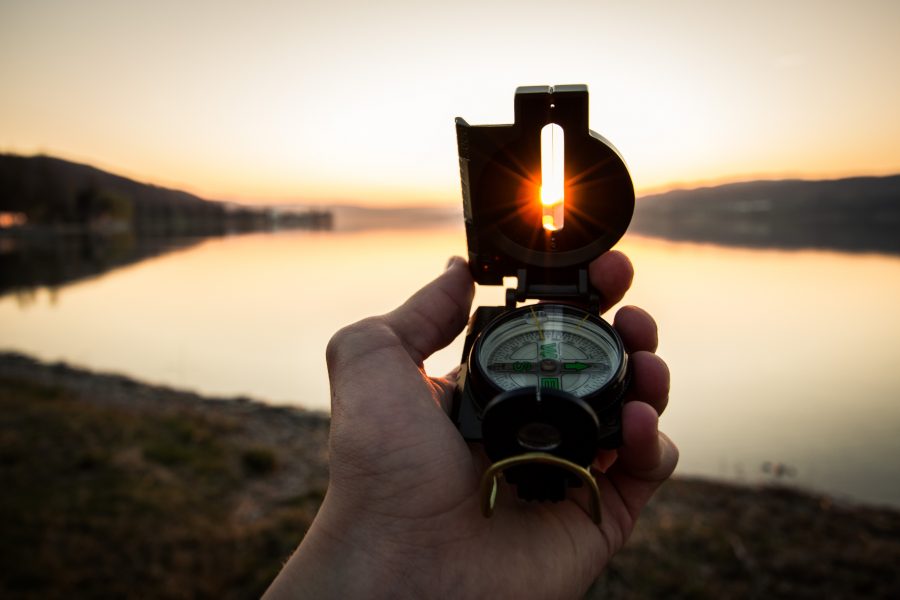 When Bitcoin was created in 2009, it aimed at becoming the universal currency of the world, one that could be both a Store-of-value [SoV], as well as a Medium-of-exchange [MoV]. The problem was, to many, that these two objectives would curate the cryptocurrency very differently.

The consequence of this debate led to faultlines being made within the cryptocurrency space, with some siding with Bitcoin’s ambition as a cash-like asset, while others presented a more long-term investment ambition, one which would be accompanied by [ambitious] valuations based on [absurd] timelines.

Bitcoin was placed against two paradigms – currency or investment. On one hand, like the US dollar, Bitcoin would be a method of payment that resulted from acceptance and stability, allowing it to be a ‘spending’ rather than a ‘spent’ asset. On the other, Bitcoin would be digital gold, its value rising with time, a ‘treasure-chest’ approach, allowing more value the longer you hold.

Currency and investment were parlayed as spending and hodling. While the former was underscored with the adoption and use of the cryptocurrency, the latter was developed out of the need to hold on the coins while the dollar and gold collapsed.

Two years ago when Bitcoin soared, 2017 saw a linear price-movement upwards, one which was sharply reversed in 2018. In 2019, the price didn’t move in one constant direction owing to waves of macro and institutional price movements, causing the spending and holding pattern of the year to be thrown out of whack.

Coming off a bearish 2018 which scalped 72 percent off the price, Bitcoin began the year at $3,800. While the first three months showed stagnant movement, the second quarter saw Bitcoin boom. From April to June, Bitcoin was up by over 250 percent, reaching its 2019 peak at $13,800 owing to several tech and financial giants adopting digital currencies and creating their own.

In H2, Bitcoin, trading in a descending triangle, declined quite sharply and fell out of the five-figure mark, dropping to as low as $6,800 in late November owing to Chinese FUD. As things stand, the king coin is trading at just above $7,300, 92 percent over its price at the beginning of the year, but 47 percent below its 2019 peak.

Given this high-and-low, retail investors, the ones to whom the question of – spend or hold is actually posed, were left scratching their heads.

To add to this confusion, owing to the introduction of several exchange features and derivatives trading, the ‘spending versus holding’ mindset devolved into storing coins on an exchange, rather than in one’s own wallet, with their own private key and trading coins-on-paper in contracts.

Centralization of finance was the main entity that Bitcoin aimed to replace. Created in the aftermath of an economic collapse, Bitcoin aimed to operate without a centralised figurehead. However, as the industry developed, many central figures emerged.

For spending and holding, the need to go through an intermediary diluted the true nature of Bitcoin, either as a transaction portal or to store one’s coins.

Capriole’s Charles Edwards told AMBCrypto that the main change of Bitcoin as an investment is because of the “centralization of Bitcoin,” attributing it to “institutions” and its use in “derivatives trading.” This caused a decrease in on-chain Bitcoin transactions.

Noting this as the”institutionalization of Bitcoin,” Edwards stated that Bitcoin’s daily average spot market has grown to four times the size of the on-chain volume and the daily average on-chain transaction value is merely 10 percent smaller than daily spot transactions. With Bitcoin being seen as ‘tradeable,’ its use has moved from principled alternatives to a “high-frequency asset.” He added,

“A higher relative portion of exchange-based transactions suggests Bitcoin is entering the era of high frequency trading. With traders moving in- and out- of Bitcoin positions many times per day…Off-chain trading volume today is magnitudes greater than on-chain volume.”

Maybe in the Exchanges

Another source of ‘centralization’ is the plethora of exchanges that now dominate the market. Edwards posited that exchange hodling is contrary to the “Maximalist matra” of – not your keys not your coin.

According to Token Analyst, ‘Exchanges are the biggest holders.’ Their October 2019 study concluded that just under $10 billion or 6.7 percent of all BTC in circulation is held in exchange wallets.

The hoarding swells when the term “exchange wallets” is expanded to “intermediaries.” Ryan Radloff, CEO of CoinShares, elaborated on this in a blogpost, comparing the “dependence” of financial assets to their ‘third-party intermediaries.’ Bitcoin, based on the “evolution of a trend,” has removed the need for intermediaries and has given users a choice to “hold a completely digital bearer asset.”

Radloff laid out the BTCs being held by third-party intermediaries in the attached table, 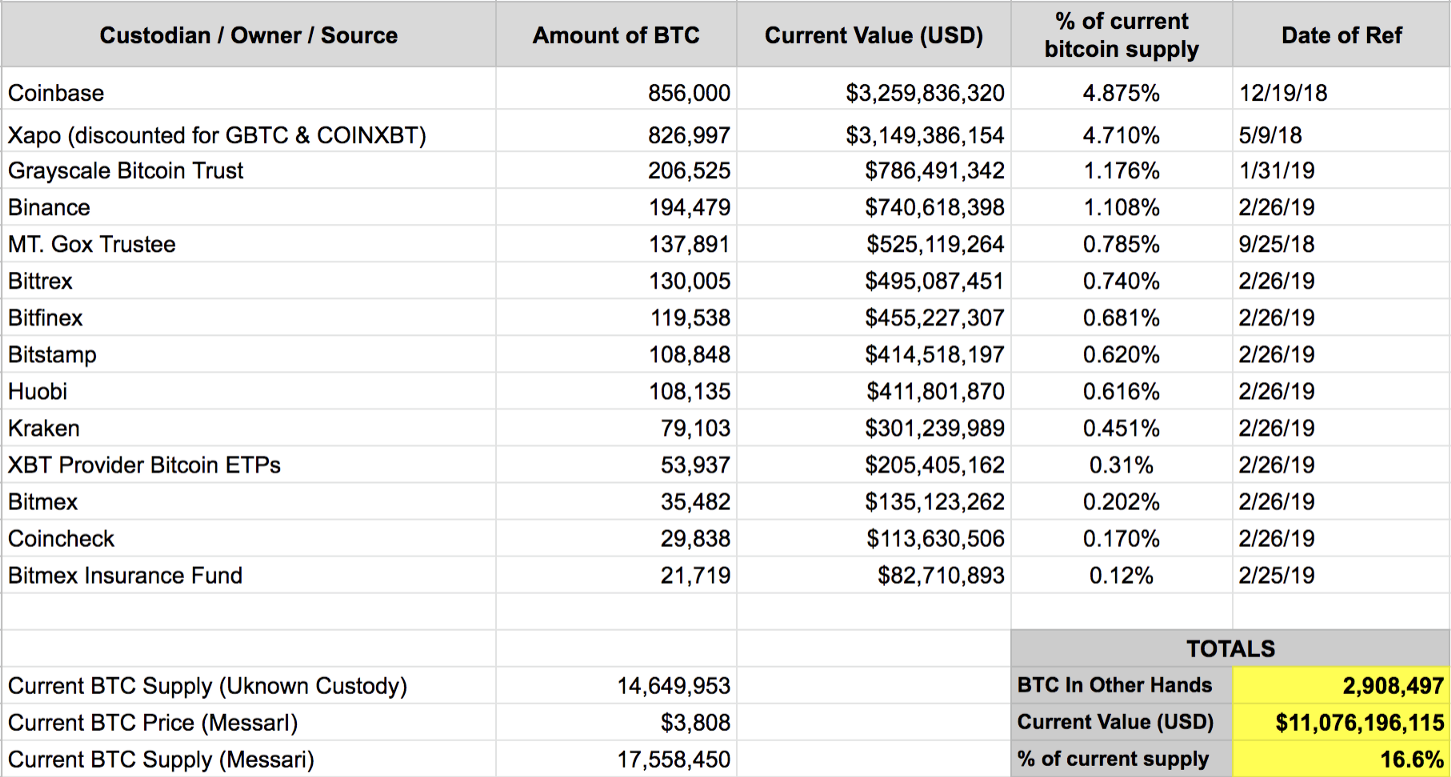 Based on his findings, Radloff estimated that 17 percent of the circulating BTC supply [March 2019] was “likely custodied by a third party,” which he classifies as “an entity that is not the ultimate beneficial owner.”

It’s in the Wallets

Hodling, to many, refers to personally holding the Bitcoins in one’s wallets. While exchanges have seen rapid growth in use and volume, so have holdings in BTC wallets, for the most part. Edwards contends this metric as a good measure of “smart money.”

If we look at the Bitcoin addresses with balances less than $1,000, the trend has been increasing since January 2018. In fact, it reached its highest mark of just short of 2,200 wallets in September 2019, currently at 2,128 wallets. Since the amount is too meager to be held by hedge funds and professional traders, Edwards attributed this to a few “early investors, miners, exchanges,” but cannot paint a bigger picture of hodling.

The measure that would be most appropriate for “smart money Hodling” would be the addresses with less than $100 in BTC. Edwards cited the old adage of traditional finance in which a diversified portfolio ought to have 1-2 percent in BTC to “benefit from its uncorrelated returns.” In his opinion, institutions, particularly the older generation, would “take a conservative approach like this to Bitcoin.”

While BTC addresses with $100 or less have been dropping since February 2017, it stood at over 16,000 addresses, at press time.

Bitcoin, in the ‘uncorrelated’ sense, could be used as a safety in times of uncertainties. 2019 saw a slew of economic and political turmoil that would force investors to rally towards the cryptocurrency, either in isolation or unison.

The economic slumps faced by Argentina and Venezuela, as well as the political protests and resulting capital concerns seen in Hong Kong, saw isolated Bitcoin movements where the volume of local fiat converted to BTC increased.

Even more global issues like the US-China trade war saw Bitcoin move up, with gold. While the two alternate investments were surging, the S&P500 was moving in the opposite direction, given the uncertainty in Washington D.C. and Beijing. Hence, the case for hodling could be made.

The trend here was easy to believe, with the crypto-world rejoicing at the realization of Bitcoin as a policial hedge. However, some were skeptical and suggested that this was yet another failed narrative and cannot be attributed to hodling. David Gerard, author of Attack of the 50 foot Blockchain, was quite clear when he said that “Bitcoin does not respond to macro signals,” advising investors to “never believe narratives about Bitcoin.” He added,

“Any claim that Bitcoin is responding to a macro signal is a narrative designed to paint Bitcoin as a trustworthy investment with an efficient market. But its market is thin and ill-regulated, which means that the biggest signal is manipulation.”

ByBit’s Ben Zhou stated that political uncertainties have more to do with Bitcoin’s price than one might imagine. He said,

“It’s becoming another hot commodity for sure, people turn to BTC when there are political uncertainties and I think it’s a fair claim considering that it was all these uncertainties and market crashes that helped sparked the creation of BTC in the first place.”

The old-tale of ‘Bitcoin’s fees are more than the coffee you’ll purchase’ declined in 2019. Another key catalyst to Bitcoin’s spending in 2019 can be tied down to the drop in transaction fees.

According to BitInfoCharts, the current transaction fee is as low as $0.39, dropping by 94 percent from $6.5 it recorded in late-June, a time when BTC was priced at $13,800 and the network was being overrun by demand.

“Transaction fees serve as an incentive for miners to play a functional role in Bitcoin’s governance. They are determined by factors such as how congested the Bitcoin blockchain is at the time the transaction is taking place.”

Miners themselves are wary of 2020. With Bitcoin’s hotly-anticipated halving scheduled for May next year, a price surge is expected by many in the industry.

Based on the previous two halvings – 2012 and 2016, Bitcoin did rise one year to six months prior to its reward reduction. However, like Gerard posited earlier, “narratives are cheap.” Furthermore, Bitcoin rose to its peak 12-18 months after the halvings, as can be seen in December 2013 and December 2017, albeit with other factors at play.

In a recent report, Longhash also stated that the narrative around a price surge coupled with the increase in mining-device investment could lead to a “mining disaster.” Investors pouring funds into mining machines and resulting in an increase in the cost of mining is unlikely to be the fuel to Bitcoin’s price next year, the report noted. Demand fuels price, not mining costs, and the demand to mine Bitcoins will only decrease, given the block rewards dropping to 6.25 BTC.  The report concluded by stating,

“If the halving pump fails to materialize, it will not only be a problem for the investors who are betting on it, it could also spell disaster for the crypto mining industry. “

The debate still rages on; is Bitcoin a store of value or a medium of exchange? Should it be used as a currency or be hodled? While its disciples eulogize Bitcoin as the currency of the masses and a future value source, the market’s response has been to trade the hell out of it, rather than adhere to its core principles.

Bitcoin is seen more as an investment, and a tradeable one at that as compared to one that requires storage. Many factors, as presented above, attest to it. Bitcoin transactions increased when the price of the cryptocurrency was booming during the second quarter of the year [April – June], and exchanges and other intermediaries accounted for a massive 17 percent of the total BTC in supply.

Moreover, Bitcoin derivatives trading skyrocketed in 2019 owing to the CME and Bakkt, in cash-settled and partially physical delivery. The two platforms have seen massive surges in volume during times of price volatility, evidencing the tradeable argument, albeit, in contracts, not coins.

In the years to come, this tug-of-war will soon play out, either to consolidation or divide. Gradwell concluded by stating,

“The bitcoin economy may be dividing into those who are treating bitcoin as a store of value, and those who are using it as a means of exchange, or at least using it to arbitrage between exchanges.”

Related Topics:Bitcoin miningfeaturedHodlingStore of value
Up Next

Is the ASIC Resistance dream closer to reality, despite claims of it being a myth?