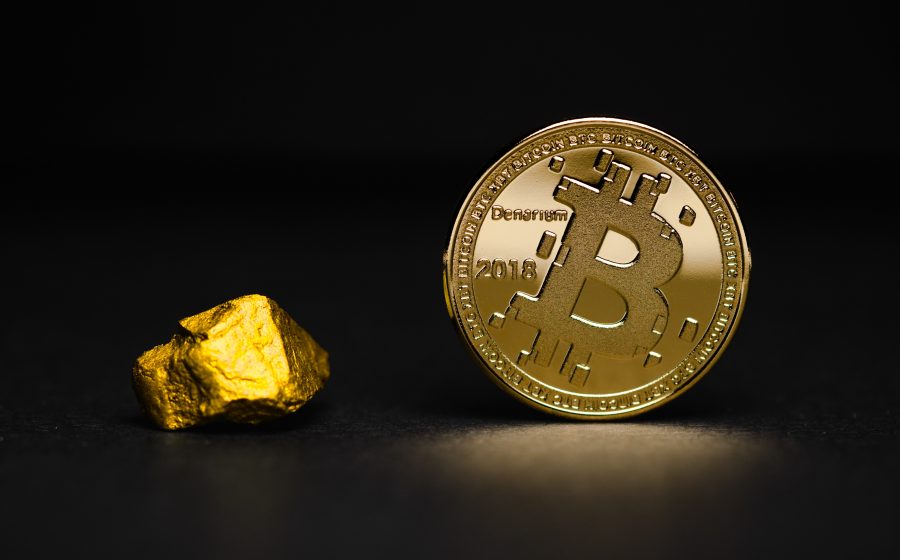 Bitcoin may have found a new best friend.

For long, Bitcoin has been the lone warrior in the cryptocurrency world. Holding well over a majority of the market capitalization, the king coin has not found an adversary among other cryptocurrencies. However, 2019 saw it in a new war with a familiar foe: Gold.

Taking a step back and looking at their tussle, digital gold and traditional gold are vying for the same spot in the market, given their marked differences. Both financial assets are non-traditional and outside the sphere of general financial investment in government bonds and stock indexes. Both the financial assets are seen as an “alternate” form of investment, one for safety in the long-run, and the other for appreciation in the short.

The Store of Value [SoV] and Medium of Exchange [MoE] argument has been made for both gold and Bitcoin. The two assets, due to their limited nature, are seen as a real hedge against fiat. During times of political and economic turmoil, when a single or a series of fiat currencies drop in relative price, investors scurry to non-traditional limited and uncontrollable assets that can even-out the price drop and can sometimes, return a profit. Gold has been employed in this hedging for years, and now Bitcoin is also competing.

Given this like-for-like movement, the two assets moving together in their respective price charts does stem from actual use, rather than mere metrics.

Open market operations, trade wars, and political turmoil; 2019 has had it all, and the markets have responded accordingly.

For the better part of the year, the two biggest economies in the world have been at odds, with economic ripple effects spreading beyond the Pacific. The United States and China have been going back and forth, changing tariff rates, devaluing currencies, and approaching sanctioned countries to better the other. Such political turmoil has pushed the yuan up to CNY7.17 per $1, its highest point in over a decade.

The United States even went so far as to label China a “currency manipulator,” following the latter’s devaluation of their domestic currency. In a bid to counter the American tariffs, in August, the People’s Bank of China [PBoC] stated that they would be allowing the yuan to break 7 for the first time since 2008.

China’s currency devaluation came a week after the Federal Reserve cut interest rates for the first time since the housing crisis of the previous decade. Since then, the Federal Reserve has cut rates twice, bringing it down to 1.5 – 1.75 basis points. The Fed has even injected several billion dollars artificially to stimulate the economy and prevent an economic slump.

While global markets like China and the United States have well-rounded effects on the global scale, individual markets have seen their fair share of tumultuous movements as well.

Take the case of Argentina. In August, following an unexpected result in the Presidential elections, the premier index, the S&P Merval, dropped by 48 percent, while the Argentine Peso [ARS] lost 25 percent of its value in a day. The LocalBitcoins volume, in ARS, rose on the day, with the low-offer premium at 8 percent higher than BTC on spot, while high-offers saw a 28 percent premium.

Venezuela, the poster-child for disastrous economic policies in the recent past, has also seen an embrace of digital currencies as an alternative to the traditional financial system. In 2019 alone, over VES242 million worth of Bitcoins were exchanged for fiat. Hong Kong, owing to political tensions with China, has also seen a ‘capital flight,’ from the Hong Kong dollar [HKD] to Bitcoin and other non-traditional assets.

Two Peas in a Pod

While Gold is up by 13.73 percent this year, Bitcoin follows closely with a pump of 105 percent. Despite the vast difference in the two non-traditional financial assets’ YTD gains, their performance in 2019 has been significant beyond measure.

Bitcoin, coming off a brutal 2018, began the year at just above $3,400, with little signs of recovery. Over the first three months of the year, it moved up by just $500, following which its big boom began. In the next quarter, Bitcoin rose by a whopping 160 percent, reaching an 18-month high of $13,800. The third quarter saw consolidation, but Bitcoin still hovered above the $7,000 mark, marking a more than x2 gain against its price since the year began.

While Bitcoin’s massive 105 percent gain was seen as a relative improvement, despite being down by over $5,000 from its yearly high, gold has seen a consistent rise, mimicking its purchasing purpose. Through 2018, gold began and ended the year at nearly the same price level, but within nine months in 2019, it managed to reach a high not seen since 2013. Despite being down by 6.54 percent [a significant amount in the XAU markets], the yellow metal is doing considerably well, given the macro-economic movements and Bitcoin’s rising momentum.

The two non-traditional financial assets have seen similar market movements. Coming off a bearish 2018, the crypto-winter in Bitcoin’s case, and the stagnant market for gold, both assets saw a massive move in the middle of the year, and by the third quarter, their yearly-highs had manifested. Since reaching those highs, both Bitcoin and Gold have dipped, but are still on course to end the year on a positive note.

From an independent price point-of-view, the two financial assets have moved in a similar trend through 2018. Their movement vis-a-vis each other has also seen a tracking effect.

From 10 May, the correlation between the two kept rising continuously as Bitcoin’s price surged from $8,000 to just under $14,000, peaking at 0.14. This high was broken two months later, with the late-October Bitcoin rise pushing Bitcoin prices and its tracking of gold. For the past six months, Bitcoin’s correlation with Gold has been only increasing.

With the tumultuous market, investors are losing confidence in “traditional markets,” stated Shaun Djie, Co-founder of Digix. The two non-traditional assets are being increasingly seen as “safe-haven assets” and hence, their correlation with the traditional economic order is inverse. He added,

Djie further highlighted three distant scenarios that caused investors to scurry to assets like Bitcoin and Gold – the political tensions in Hong Kong, Brexit, and the US-China trade war. Investors of these markets are moving to make their holdings, “recession-proof,” in light of the unresolved political tension.

Both in isolation and together, Bitcoin and Gold have seen similar movements, and the macro-economic effects of the world seem to be pushing them together. However, this could very well be another ‘flawed narrative.’ Markets aren’t perfect; the decline of one need not mean an increase in the other. The effect, or lack thereof, of the Federal Reserve dollar pump on Bitcoin’s price is a testament to the same.

Speculation is what is driving their value, rather than similar movement, and this correlation is just a “coincidence,” said David Gerard, author of Attack of the 50 Foot Blockchain. To put it succinctly, while Bitcoin and Gold are priced in the thousands, what is fuelling this movement are cheap narratives. He stated,

“There are lots of narratives that try to connect the prices of Bitcoin and gold – but narratives are cheap.”

Bitcoin sharing the stage with gold might be the cryptocurrency’s gain. A traditional giant like the yellow metal has long been a safe-haven during economic uncertainties, and Bitcoin tracking its movement, especially in a turbulent 2019, shows the maturation of cryptocurrency, from a payment tool for the Dark Web to a hedge against economic turmoil.

Every asset has its place within an investors’ portfolio; there are those that are meant for growth, leverage, and safety. While Bitcoin has been used for all three reasons over the past decade, this movement with gold may just be a case of Bitcoin ‘finding its place’ in the world, according to the Founder of Quantum Economics, Mati Greenspan, who stated,

“To me this is more about BTC coming of age and finding it’s unique place within the global macro marketplace.”

On asked if this “unique place” was as a non-traditional asset that can hedge against decisions taken by the Federal Reserve and the People’s Bank of China, an anticipatory Greenspan stated, “I guess we’ll find out.”

The two non-traditional financial assets have seen their relationship change this past year. No longer are they vying for the same place in an asset manager’s portfolio. They cannot be seen as the two brash kids always fighting; rather, Bitcoin and Gold might just be the couple holding hands watching the sunset on a successful 2019.

Gold’s dominance in the world has stood the test of Bitcoin, while the digital currency has made such a leap in terms of price and adoption that a 40 percent drop from its yearly high cannot undo it. While the correlation might hold some truth or be yet another price narrative that BTC and Gold maximalists like to hold on to, it does make for interesting food for thought, and allows more macro-economic theories to spillover into 2020.

Related Topics:ChinafeaturedgoldUnited States
Up Next