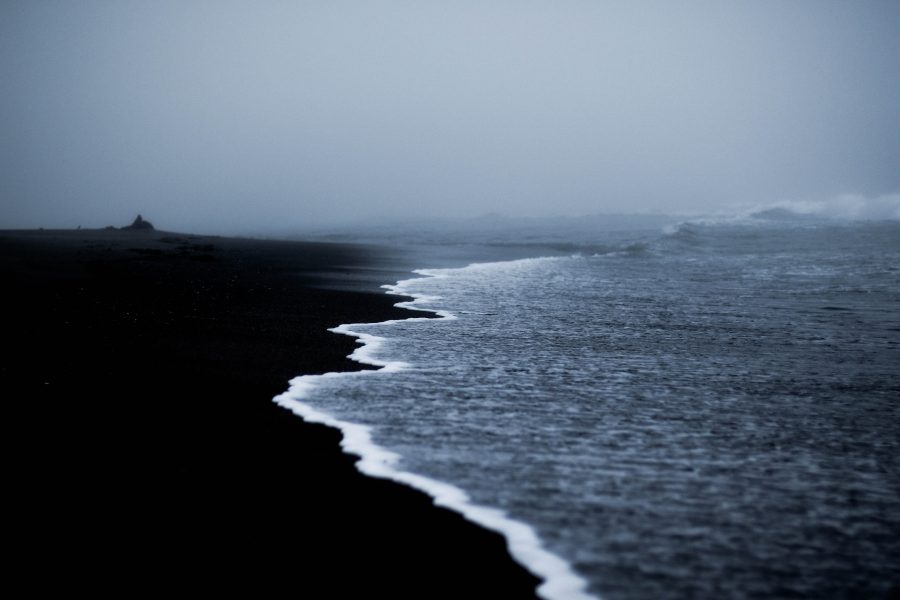 Change is inevitable, from physiology to psychology, agriculture to automobiles and fiction to finance, every aspect of society has seen a wave of change in the past few decades. Bitcoin, a digital currency owned by no one person but for everyone, was thought to be an act of “fiction,” but in the years since, it has become an imperative part of “finance.”

There’s no-surprise that in the past decade, Bitcoin has been the most-profitable investment. Bank of America [BoA] Securities recently concluded that a $1 investment in Bitcoin, in 2010, now would be worth over $90,000. The other prominent SoVs that has long contested against Bitcoin, didn’t fare that well. Despite many stating that it’s in a golden period, a $1 investment in gold has resulted in a whopping 34 percent return in 10 years, stacking $1.34.

On the equity front, American companies dominated the decade, the nation’s domestic stock-market returned 246 percent, turning a $1 investment to $3.46 in 10-years.

Two long-standing foes of Bitcoin – gold and the US stock-market were paltry against the cryptocurrency in the 10-year return challenge; however, investors still look to them for valuation, and refuge during a currency crisis. Coincidentally, in 2019, the two asset classes have seen an interesting movement with Bitcoin- on for and one against.

While the past 10 years saw the United States see the greatest equity-returns, the past 12-months have not posited it at the top. Bitter rival China saw its stock index the CSI300 outperform the S&P500 by 3 percent through the year. In terms of technology, and e-commerce Chinese companies like Baidu, Tencent and Alibaba made remarkable gains.

The SPX saw two brief-cycles of downturns owing to the trade-war with China, but is slated to end the year on a 26 percent increase. Meanwhile Bitcoin, YTD, is up by a 102 percent. Despite both the assets performing well, they moved in opposite directions through 2019.

By gold-standards, volatility was high, seeing a surge till February followed by a slump to mid-May. Coincidently, as the Bitcoin-market was lambasting gold in a curated ad-campaign, the commodity bottomed out and since then saw a consistent incline.

Bitcoin did see a leg up against gold, particularly during the beginning of the second-quarter of the year. When Bitcoin surged on April 2, and continued through the month, doubling its YTD price, XAU was up by a mere 7 percent, amplifying the calls of a new SoV.

While the two assets were jostling for alternate-dominance, a slew of political earthquakes pushed them together. Currency crashes from Argentina to Turkey, protests in Venezuela and Hong Kong and monetary-manipulations in China and the US saw the two become “safe-havens.” According to Shaun Djie, CEO of Digix, a blockchain company providing tokens for gold, who told AMBCrypto,

“This year has seen the correlation between BTC and gold become increasingly prominent, edging closer towards perfect lockstep by the middle of the year. From June to September, the gold and BTC markets followed extremely similar trajectories.”

While global markets turned into trouble, Bitcoin and gold turned to each other. Political and economic turmoil was rampant through 2019, and in several countries, concerned-citizenry looked at them as a hedge, against their falling economy and currency.

Undoubtedly, one of the most pressing political issues in the world was the Hong Kong protests against the extradition bill. The financial-haven of East Asia saw a premium on the price of Bitcoin in Hong Kong dollar [HKD], as citizens began looking at capital flight away from mainland surveillance.

Tidebit, a popular HK exchange saw the price of Bitcoin trading at a $75 – $100 premium, in June. LocalBitcoins also noted that the Bitcoin purchased for HKD had reached its highest point in September, with the weekly volume notching $12 million.

Interestingly, in an op-ed published in December, crypto-advocate and CSO at the Human Rights Foundation Alex Gladstein, noted the importance of Bitcoin in Hong Kong. With activists having their bank-accounts closed by HSBC, Gladstein stated,

“There’s nothing Beijing can do to stop anyone from financing the Hong Kong protests with Bitcoin.”

South America was littered with cases of run-down economics. Venezuela, an early ‘backed to a corner’ crypto-adopter saw spikes in their Bitcoin volume. In 2019 alone, over VES242 million worth of BTC was exchanged for local fiat, not to mention Venezuela’s affair with their own digital currency and other private cryptos.

The LocalBitcoins-Venezuela volume began to shoot up in October 2018 and peaked in June 2019, surging as high as $120 million in Bitcoin.

Argentina was another forceful South American Bitcoin adopter. In August, following an unexpected election, the peso [ARS] dropped by over 25 percent while the premier stock-index, the S&P Merval lost 48 percent of its value. During this economic and currency slump, LocalBitcoins noted ARS-Bitcoin low-premium of 8 percent and a high-premium of 28 percent. Buenbit, a Buenos Aires-based exchange saw BTC trading at $11,700, while on major exchanges like Coinbase, Bitstamp, and Bittrex, Bitcoin was trading under $11,300.

When the unstoppable force met the immovable object, there were collateral gains. The trade war between US and China saw a retreat into safe-haven assets.

The tussle between the two economic giants peaked in mid-2019. In July, the Federal Reserve announced rates cut, for the first time in over a decade, causing the biggest SPX weekly-drop since November 2018. China, responded to this by devaluing its currency, earning it the title of “currency manipulation.” While the SPX and the dollar were dropping, BTC and XAU looked up,

Gold and Bitcoin jump after another escalation in US-China trade dispute. pic.twitter.com/nt8q8tzS4A

Both gold and Bitcoin saw parallel movement, as the trade-war slumped the SPX. Bitcoin was holding onto its June YTD-high of $13,800, gold saw its biggest 2019 weekly-gain, increasing by 3.92 percent in the first week of August to $1,492/ounce. Alex Saunders stated that the inverse relationship between the S&P and the two non-traditional financial assets “remains strong.”

The below chart shows the S&P slumping while both gold [orange] and Bitcoin surge. 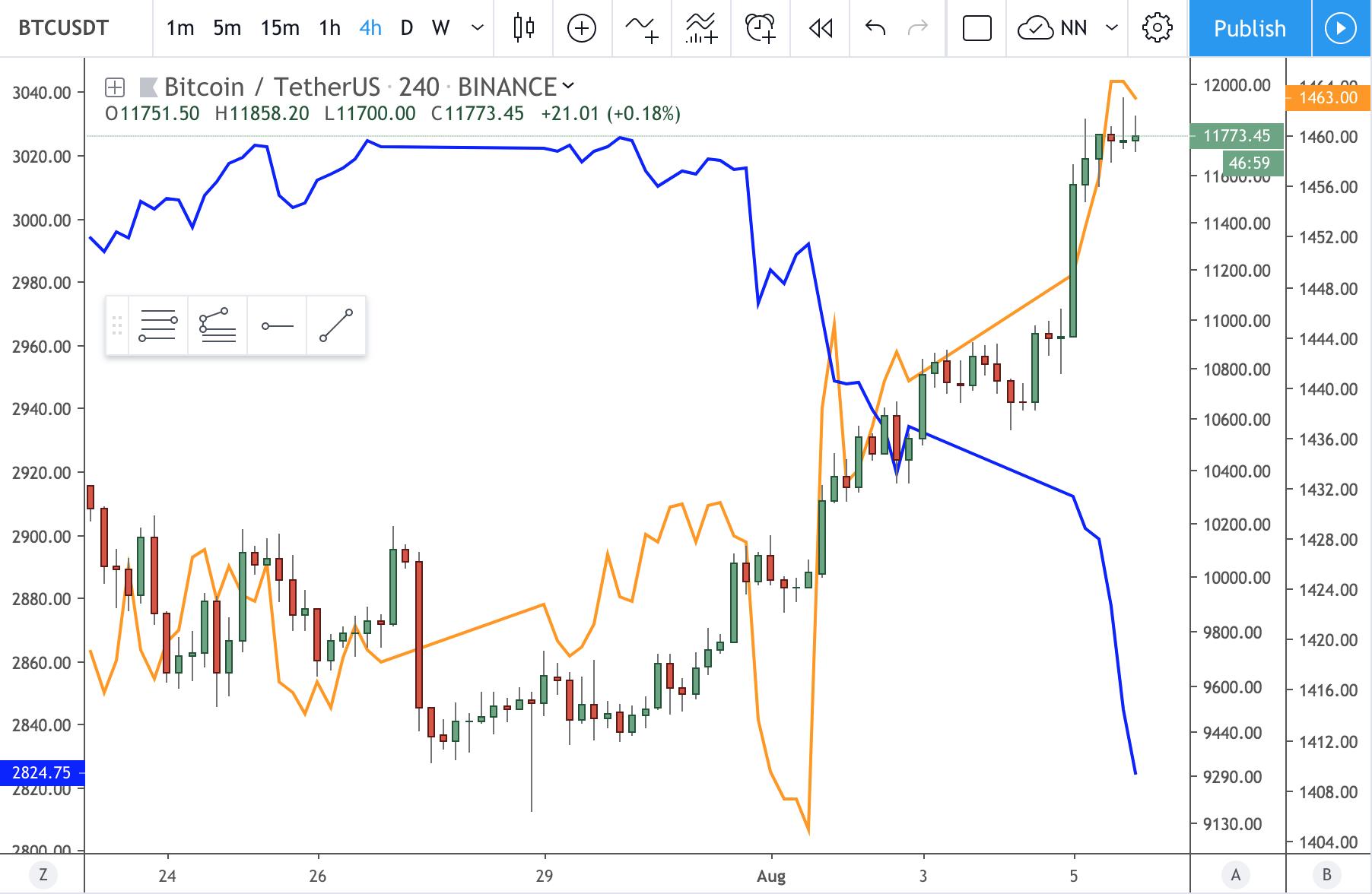 Looking at the larger picture, eToro in a Business Insider reported study, stated that between 19 May, 2019 – 19 August, 2019 there was a 284 percent surge in BTC trades compared to prior to the trade-war, while gold’s price increased by 73 percent. The trading platform highlighted three dates where BTC-trading doubled and gold moved-up considerably,

Not just confined to the Pacific, political and economic turmoils the world over have seen a digital and traditional gold surge. While, from an institutional point of view, compared to the two veteran investments, Bitcoin is not “a meaningful investment,” according to Chainalysis chief economist Philip Gradwell, this does not “prevent it from being a political hedge.” He told AMBCrypto,

“There does seem to be increases in bitcoin demand in politically turbulent countries. However, this demand is small relative to the demand for bitcoin as a speculative asset.”

While the three assets had different 2019s, two paths were paved. Bitcoin and gold did see increased trading, and even positive moves during times of economic turmoil, the S&P moved the other way. Gold saw much more linear-global movement, since May, and Bitcoin saw pockets of increased trading, particularly in shaking economies.

Despite this stark lack of correlation [in 2019], a prominent Bitcoin bull, Fundstrat’s head of research Tom Lee is of the opinion that “Bitcoin does best when the S&P’s up more than 15%.” Referring to this quantitative-link, Capriole’s Charles Edwards, told AMBCrypto that “Bitcoin’s best years have coincided with good years for the S&P.” Edwards highlighted that Bitcoin’s 2017 high coincided with a “major S&P breakout.”

He added that this could be a “bull case for Bitcoin,” particularly in light of the fact that the Fed has cut rates 3 times and has adopted a ‘QE-like,’ policy. In a recession-like worst-case-scenario, Bitcoin could be an hongchoice given the surge in US institutional Bitcoin interest according to CoinGecko co-founder Bobby Ong, who told AMBCrypto,

“If there is a recession in the US, Bitcoin may now be impacted as well as there is now a higher level of institutional investors invested in Bitcoin compared to previous years.”

Despite gold and Bitcoin making snide remarks at each other during Grayscale’s #DropGold campaign, and Peter Schiff’s Bitcoin jibes, political uncertainties has brought them together. So much so that Coinmetrics noted that the two assets saw their highest correlation since 2016.

Shaun Djie noted that the Bitcoin and gold have shown “inverse correlation,” with traditional markets. The source of these correlations, is however not quite grounded in fact, David Gerard, author of Attack of the 50 Foot Blockchain, told AMBCrypto that this ‘correlation,’ can be attributed to one of the many ‘cheap narratives,’ floating in the market. Edwards did acknowledge that the two assets found a “spate of growing correlation” during that period, which has since passed. Not one to write off the link, he added that a longer period is required to study the correlation, or lack thereof,

“We will likely require many more years to confirm if a correlation between Bitcoin and Gold exists.”

Bitcoin, gold and the S&P500 represent three different paradigms of the market, each having their own army. For every Mark Cuban, who backs the banks and calls Bitcoin and gold ‘useless,’ and Peter Schiff who decries Bitcoin’s rise and praises gold there is a Max Keiser who shouts “every fiat is going to zero,” and an Anthony Pompliano who relentlessly tweets, “Long Bitcoin, Short the bankers.”

While the data does indicate that Bitcoin has moved with gold, and away from the S&P500 in 2019, with adequate support from the unstable global-economic and political order, industry experts either admit this to be too short a time-frame or a passing narrative. As far as safe-haven assets go, the two have been seen walking away from the economic-storm, just maybe not down the similar path.

In closing, Gradwell stated that market dynamics are not quite straightforward, the path may often have its own twists and turns,

“While for many people holding bitcoin, they are probably much more long bitcoin than they are gold or the S&P 500! So, it is unlikely that there is a deep relationship between them, instead they each move due to their own dynamics.”

Bitcoin’s upcoming halving may be different because of derivatives market