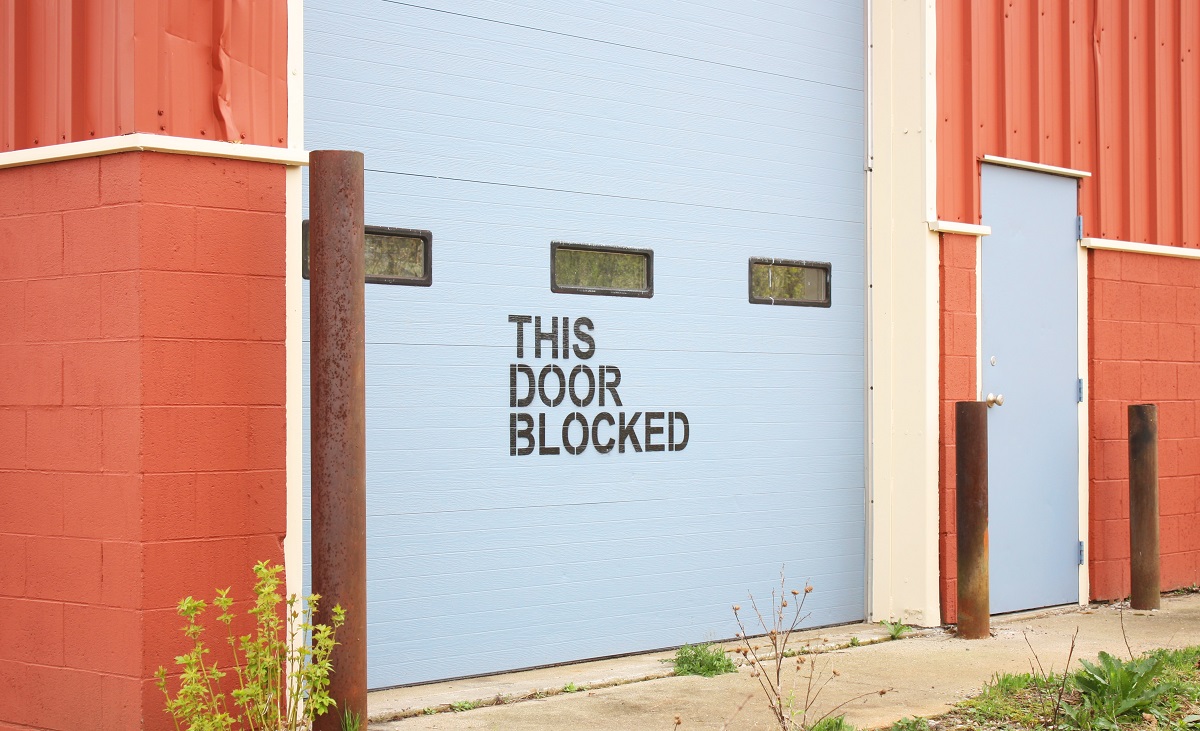 Shadowbanning – the act of banning or partially blocking a user or their content from social media due to the violation of certain norms, has received a lot of traction lately, especially in the crypto-sector.

2019 saw a lot of stringent actions being taken by YouTube and Twitter against crypto-content, with most of it being marked as “harmful or dangerous content” and “sale of regulated goods.” Starting from May 2020, Google also rolled out a new core update that restricted a lot of crypto-related content. However, the question is – Is it just crypto, or is it part of a larger trend?

Part of a larger trend?

American professional surfer, Kelly Slater’s Instagram account was also recently shadowbanned. Slater had posted on his stories showing that his story views were limited to 1000 views, while he had a following of 2.6 million.

Similarly, Twitter also removed several tweets about the coronavirus pandemic, tweets posted by prominent personalities, with the company claiming that it has a “zero-tolerance approach to platform manipulation and any other attempts to abuse our service at this critical juncture.”

So no, it’s not just crypto, and perhaps, it might just be a part of a larger trend. What trend though? That is something that can be addressed after a perusal of the crypto-accounts that have met the same fate from such social media platforms.

YouTube is used by many crypto-traders and analysts for making educational videos to help people understand different cryptocurrencies like Bitcoin, Ethereum, XRP, Litecoin, and more.

However, despite its popularity as a medium, YouTube took down millions of videos related to cryptocurrencies in 2019, before outrage forced the platform into restoring them and claiming that they had been deleted by mistake. However, the fact that there was another crypto-purge in February 2020 makes one wonder as to on what basis is cryptocurrency content being banned by these platforms.

Additionally, the world’s largest video content platform came out with new guidelines on 1 January 2020, with the new policy strengthening the rules and increasing penalties imposed on repeated patterns of harassment.

MMCrypto, DavinciJ15, The Moon, Ivan on Tech, Sunny Decree, Altcoin Daily, and many other channels were affected. On 6 May, YouTuber and crypto-researcher Carl’s [The Moon] account got shadowbanned. He noticed that the views on his account dropped significantly a few hours after uploading the video. “The video is no longer visible when you search for it & subscribers don’t get notified,” he noted.

Surprisingly, YouTube deleted one of his videos on Bitcoin again on 13 May, with the YouTuber later venting out his anger on Twitter. However, after YouTube restored the video a few hours later, again claiming it to be a “mistake,” he noted, “But this has to stop soon! I lost all momentum on this video because of this “mistake.”

My latest #Bitcoin video was deleted by YouTube. They claim I broke "Community Guidelines", but are not very specific!

Please @TeamYouTube, we've had too much of this censorship in the past few months.

The social media giant was among the first platforms to ban crypto-related ads. However, the platform has turned into a major supporter these days following Facebook’s plan to launch its own stablecoin – Libra. The platform even put out a blog post on the same which read,

“We’ve listened to feedback and assessed the policy’s effectiveness. While we will still require people to apply to run ads promoting cryptocurrency, starting today, we will narrow this policy to no longer require pre-approval for ads related to blockchain technology, industry news, education or events related to cryptocurrency.”

Twitter also shadowbanned quite a few people who posted and shared crypto-associated content on their platform. Many popular crypto influencers’ accounts were restricted, limiting their reach and impressions. The fact that this happened just days before BTC’s halving is indeed something to think about. Was it done on purpose?

Interestingly, Twitter’s Co-founder Jack Dorsey is a big promoter of Bitcoin. Dorsey has time and again echoed his support for Bitcoin and its decentralized nature. So, it indeed makes one wonder why Twitter is giving crypto-associated accounts and content creators such a hard time.

On the other hand, many have alleged that most of the crypto-content being allowed on Twitter are really about Bitcoin. So, another question here is whether Dorsey’s endorsement of Bitcoin makes Twitter act out against account promoting altcoin accounts. It’s a stretch, to be honest, but it’s worth mulling over. After all, how many private companies do we know of that let their CEO’s outlook affect their operations?

One can’t help but raise the question of whether Bitcoin and a few Bitcoin-supporting accounts are being given preferential treatment. In fact, some have also suggested that corporate-funded crypto-associated content is also looked upon favorably by most social media platforms.

If the content violates a platform’s policies, it reserves the right to ban it, delete it, or do whatever it wants with it. However, the fact that some misleading spam and shill accounts continue to thrive, while educational crypto content is blacklisted on such platforms is what raises this very pertinent question.

Prominent crypto-personalities such as Tron Foundation’s Justin Sun, Binance’s CZ, and others who shill their coins are continuously promoted and given a push on the platform, while other altcoins aren’t seemingly given the same degree of importance. Additionally, reports have claimed that former Twitter employees admitted to such a conspiracy inside the platform.

#ForkGoogle was a rage on the Internet, a hashtag accusing Google and YouTube of targeting Bitcoin and other virtual currencies. In fact, the campaign called for migration to other distributed platforms like Steemit and Brave. 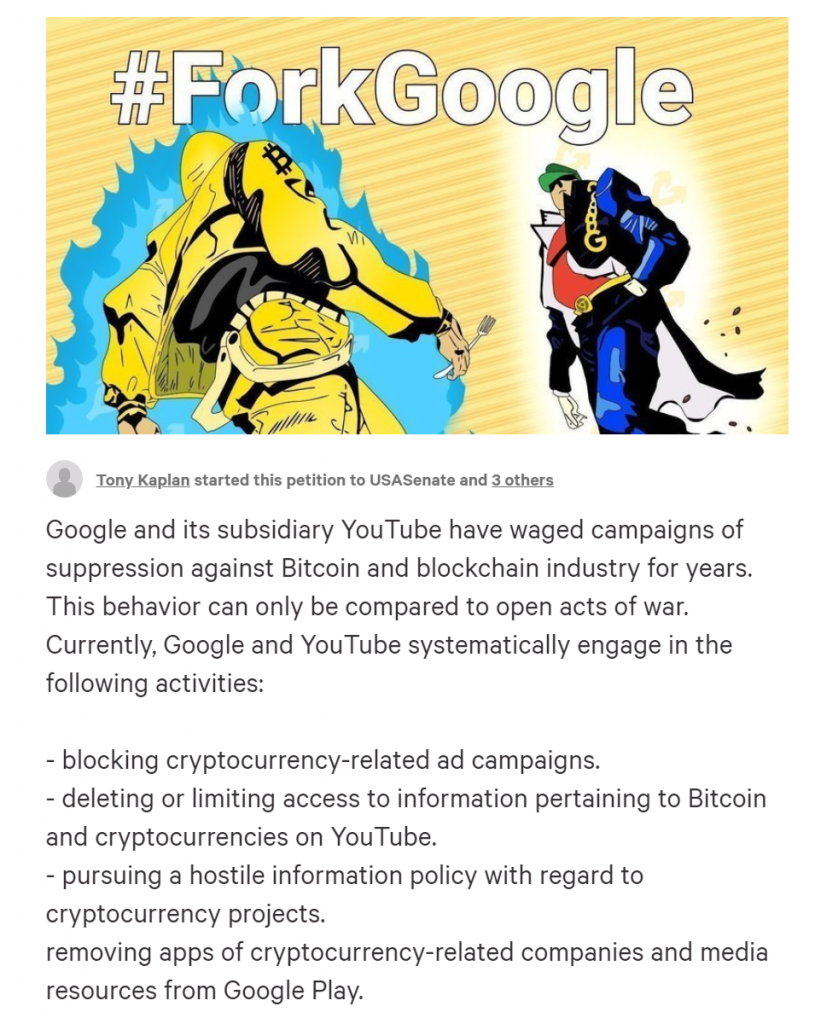 Source: Push back against Google’s attacks on Bitcoin and cryptocurrencies, change.org

However, for all the outrage and all the “mistakes” these platforms claim to commit, the question remains unanswered. What triggered these bans on crypto even though many did not violate the policies in any way? Why ban it and then restore it?

While it has been over a decade since Bitcoin came into existence, not everyone everywhere knows about it. Moreover, the world has seen a host of scams and crypto-related misleading content on the Internet, all of which have resulted in people losing money.

It can thus be argued that the shadowbanning of educational crypto content is collateral damage in the social media platforms’ fight against crypto-associated scams and Ponzi schemes.

In defense of social media platforms

In all the hue and cry that accompanies the outrage associated with shadowbanning, people often forget the nature of social media platforms like Twitter and Facebook. These platforms, almost all of them, are privately-run corporations, entities that are perfectly within their rights to censor content as and when they please when it appears on their webpage.

Sounds unfair, right? Well, not quite, because each of these platforms has content policies users have to mandatorily adhere to, policies that are always readily available for the perusal for each platform user. Such policies have become the norm across all platforms.

The outrage, if any, must, therefore, lie at the feet of how these policies are interpreted and put into action. Just consider the Coronavirus example listed above. Over most of 2020, there were competing narratives on how to tackle the pandemic, narratives that were accepted and promoted by different health agencies across the world, including the CDC and the WHO.

In such a case, it is never easy to discern between what is true and what is “platform manipulation” since everybody is unaware of what actually is accurate (By the way, Twitter, did you even try to clamp down on accounts that praised President Trump for suggesting bleach injections might kill COVID-19 germs? No, right? I knew it).

It is also to be noted that there’s no all-powerful AI like Skynet lording over everyone and checking tweets against a platform’s content policies. Content is monitored by a team of people. People. Ergo, such monitoring is bound to be subjective.

It would be unfair to not see the humanitarian side as well, one contrary to the points listed above.

Platforms may be well within their rights to censor content on their platforms, but it shouldn’t be forgotten that many people’s bread and butter comes from these platforms. Ergo, it seems a bit unfair on their part if censorship dawns so quickly and suddenly, especially if no notice or reasons are provided for the same.

Platforms must step up

In times like these, when central banks are printing more money than ever, crypto-enthusiasts see it as a necessity to make more people aware of cryptocurrencies through educational videos. This is crucial since it comes in the face of several national governments continuing to be unconvinced by the idea of decentralization, a decade since Bitcoin’s inception.

In light of growing economic concerns across the world, platforms should be duty-bound to allow, to the best of their purview, content that may be educational. At the very least, such platforms should find a way to balance the right to freedom of speech with their own right to regulate content against the policies they have set in stone.

Will that happen soon? Unlikely, because not only have a lot of these shadowbanned accounts not received a response from platforms, but the world seems to have other priorities at the moment. Understandable, probably.

Related Topics:Crypto shadow-banningFacebookfeaturedTwitterYouTube
Up Next