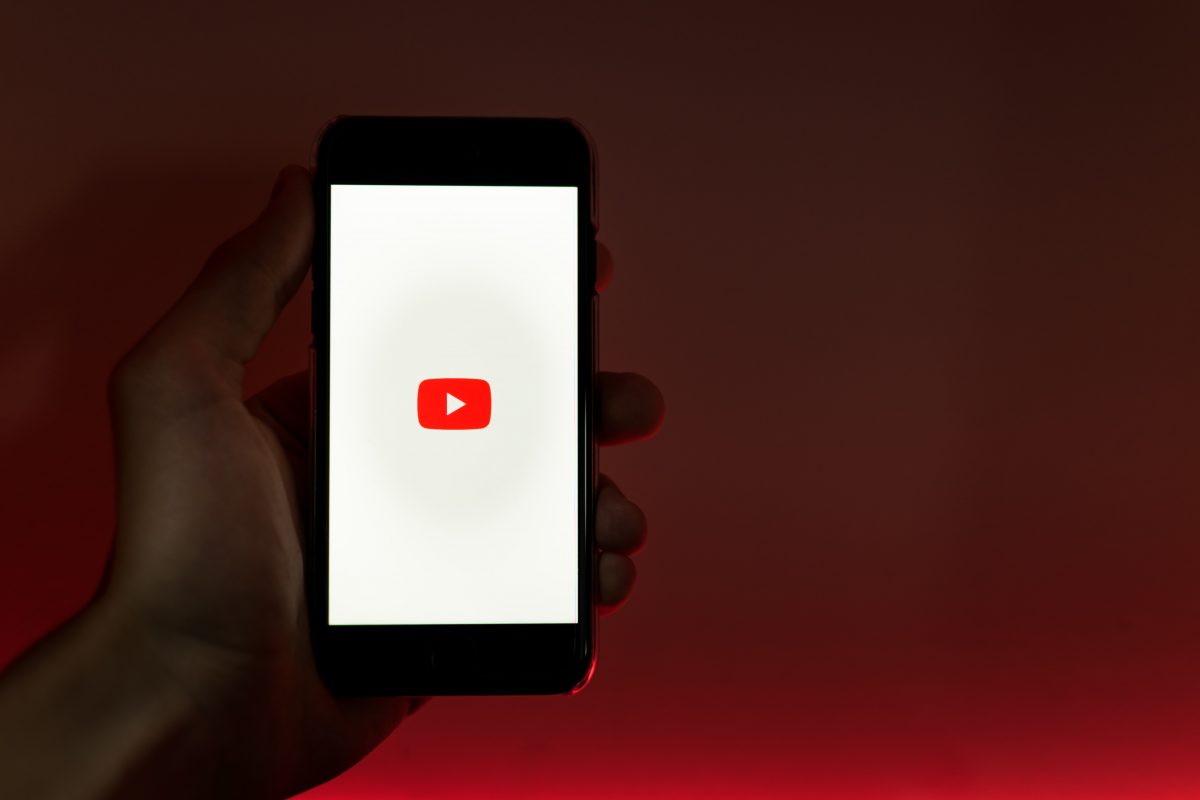 The Internet has pushed the entire world into its phones and laptops. With this, came bad actors with the malicious intent to lure users into a fraudulent website or link. Even for the most tech-savvy person out there, the distinction between what is legitimate and what is not might not always be a case of black and white.

With Internet 2.0 and the Bitcoin hysteria that is today, the list of scams is now much longer, a list that can make even the smartest people fall for it.

Let’s look at the popular American video-sharing platform, YouTube, and the Bitcoin scams that operated on it. Here, victims are being regularly tricked into sending a small sum of cryptocurrency to the scammer after falling for hoaxes masquerading as famous crypto-personalities.

While this type of malicious content was once very popular on Twitter, it has now moved on to YouTube. The common method of executing this not-so-perfect crime is usually by compromising existing accounts [even the verified ones] with a significant follower base to give it an air of legitimacy, while also changing the picture to one featuring famous people and/or organizations.

Here are some cases that have made headlines recently,

A popular YouTube channel, TopTenz, with over 1.6 million subscribers on board, was hijacked in April this year and renamed as ‘Coinbase Pro English.’ Following this, the scammer went on to live-stream a session of a purported AMA with Coinbase CEO Brian Armstrong, which was actually some old footage. In fact, the stream was encouraging viewers to send Bitcoin, promising them a massive giveaway of 5,000 BTC in return.

The stream ran for more than 12 hours, and according to blockchain explorer, some viewers who were lured in to make the payment were duped of a total of 7.2 BTC.

Blockchain giant Ripple filed a complaint accusing YouTube of its failure to disable scam accounts and ignoring complaints of accounts that were maliciously promoting fake giveaways by creating fake Ripple and CEO Brad Garlinghouse accounts as bait to encourage viewers into sending thousands of dollars’ worth XRP.

The scammers promised a non-existent reward of 5 million XRP in return. Here, what was more damaging was that YouTube also awarded a “verification badge” to a hacked channel which was proudly exhibiting the photo of Garlinghouse as its profile picture. This enabled the scam to proliferate, despite the platform completely ignoring calls for the video to be taken down. 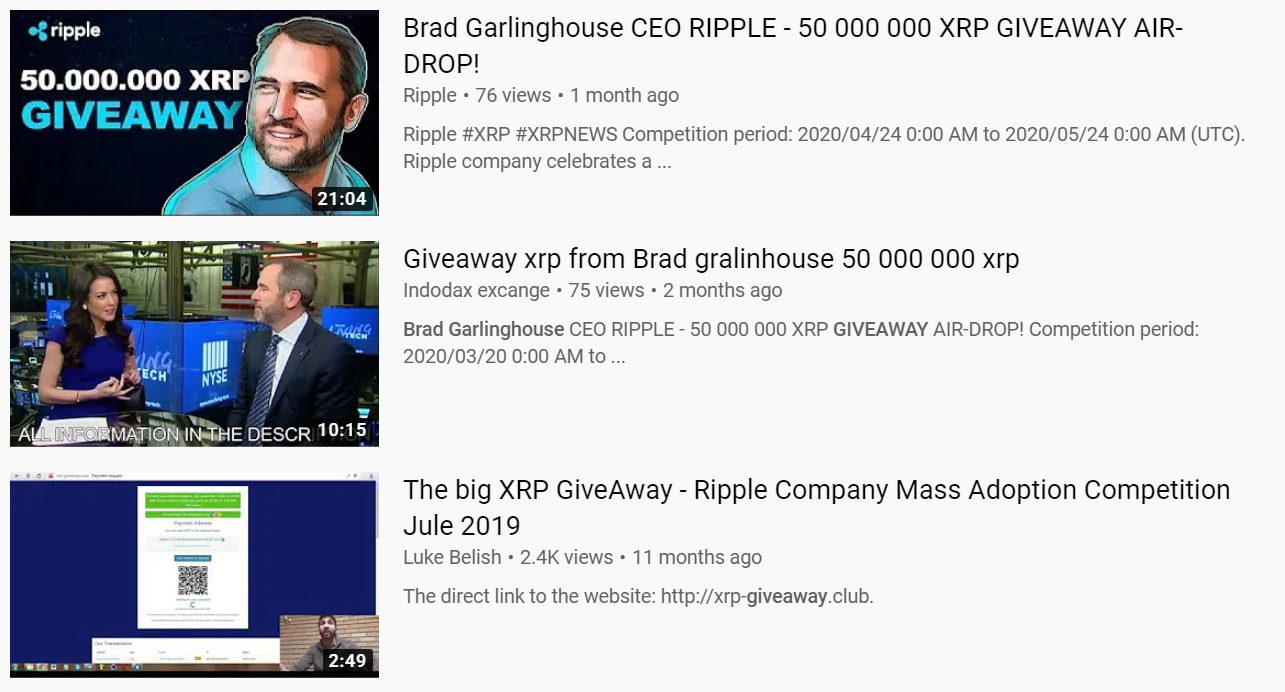 In a recent turn of events, just a week after the blockchain firm initiated a lawsuit against YouTube in the Northern District of California, the video platform suspended Ripple CTO David Schwartz’s account on the grounds of ‘impersonation.’ The channel of the exec, who also goes by the online moniker “Joel Katz,” has been active for years, which is why this development was interesting in light of the timing of the legal proceedings and suspension of the account.

According to ‘xrplorer’, XRP holders had sent over 8.5 million XRP in 2019-2020 to known fake airdrops and YouTube giveaway scams.

Associating a big name to lure in viewers has become the common norm in scammy giveaways and fraudulent airdrops. Another big fat scam was Bill Gates’ ‘Bitcoin giveaway’ on YouTube, wherein a malicious actor hijacked several YouTube accounts and renamed them to various Microsoft brands, streamed a live Ponzi scam to all the viewers, posing as a message from the company’s former CEO Bill Gates.

Another public figure whose name was abused in another cryptocurrency scam was tech honcho Elon Musk, after a channel impersonating him claimed that SpaceX and Musk were giving away 5,000 BTC. The YouTube video featured SpaceX’s launch on 30 May, in collab with NASA, among other projects, was used to entice viewers into believing in the scheme. Beneath the video was a URL and a BTC address where viewers were encouraged to send in their cryptos.

According to reports, one of the wallet addresses had recorded 85 transactions containing 11.25 BTC, while another had 37 transactions with a total of 5.51 BTC. While most of the hacked accounts were removed, one was still left with 146 views, at the time of writing.

Content creation and production are a few of the most lucrative spaces in today’s world. Despite many new emerging platforms, YouTube undoubtedly remains the most popular of them all. Earning with such a popular video hosting service is quite easy. It is a split of 45/55 for all content creators who choose to monetize their content through it.

While 45 percent revenue of all the ads on a content creator’s video is kept by Google, the rest goes to the creator. While making big money is not an easy job, with an ever-expanding audience base, this has proved to be quite profitable to many.

Many scammers are being drawn to this popular platform to prey on content creators to make a quick buck. The aforementioned instances were just a few of the numerous hacked accounts of known personalities whose accounts have been taken over or hacked and turned into a scam, especially via livestream cryptocurrency scams, a common occurrence ever since the industry went mainstream.

More interestingly, despite the popularity of these accounts and their huge subscribers, most of the “audience” viewing the fraudulent livestreams could potentially be bots, another effort at lending credibility to the channel. High in the need to get rich quick, many unsuspecting people often fall for such scammy schemes.

On the other hand, for some, it did not end there.

Just take the case of GamerThumbTV, another YouTube content creator who was a victim of a hack. With over 50,000 subscribers, this user was sent an email about a sponsorship called ‘AutoFaucets’. What initially looked like any normal PC optimization program turned out to be non-existent. After several clicks, the program did not load, following which the user was sent a ‘fixed file’ which was actually spyware, upon downloading which the content creator’s login credentials were stolen.

I found the ORIGINAL emails I received from the hackers. They even included elaborate video examples from other creators that looked legit, which I now know were faked. Creators, DO NOT respond to this type of email. It is a bitcoin scam. @YTCreators #YouTube #creators RT pic.twitter.com/seGUwCZ1d5

Thanks to Google representatives, the user eventually got back his channel after two weeks. However, this was not before the scammer sent ransom emails, hijacking the account and the channel, unless some Bitcoin was deposited.

Social media.. a safe-haven for swindlers?

In order to give such scams more credibility, some tricksters have now resorted to using “Bitcoin Vanity Addresses,” meaning, the addresses containing the name of a celeb apart from random numbers and letters by the impersonator accounts, setting up the hoax. These addresses look something like this: “1MuskPsV7BnuvMuHGWmmXUyXKjxp3vLZX6” or “1ELonMUsKZzpVr5Xok8abiXhhqGbdrnK5C

You can find more details about these addresses and how much Bitcoins were sent to them on a website called ‘BitcoinAbuse’. A glance at the comments on the website would reveal that they fell for it because the name of Elon Musk was attached to it and was promising 2x returns.

Looking at these, it can be argued that social media is the perfect channel to lure in the right kind of victim.

2020 has been all kinds of disasters

2020 has been the second-worst year, when crypto-scam numbers are considered. However, by the looks of it, 2020 could easily surpass 2019 and become the worst-hit year in the history of the cryptocurrency industry. According to the digital asset intelligence platform CipherTrace, in the first five months of the year, illicit funds siphoned through various thefts, hacks, and scams climbed all the way to $1.4 billion. As Coronavirus wreaked havoc across the world, some malicious players even set up hoax accounts of global entities such as the World Health Organization, The Red Cross, etc.

If something is too good to be true, it probably is

With each passing day, scammers have been leveling up their game, making even the smartest person fall for such schemes. Even FOMO plays a part here. As anyone who has been following the cryptocurrency space might know, Elon Musk likes Bitcoin. Musk’s company SpaceX successfully launching astronauts for the first time in space was big news. Musk himself was proud of how his efforts had borne fruit. But soon, scammers were making sure to take a chunk of his pie.

Livestreaming tactics have become increasingly popular these days, primarily because many well-known celebs have been part of numerous livestreams, bringing in more audiences, which is why it is impossible to determine whether anything is real or fake. Hence, it is important to understand that no matter whose livestream you are watching, if someone promises you the world, promised you 2x or 100x on your investment, it most likely isn’t true or is a scam or both.

If you lose your coins once to these scammers, there is no way you are getting it back. So, think carefully before you get excited about a Garlinghouse livestream on YouTube.