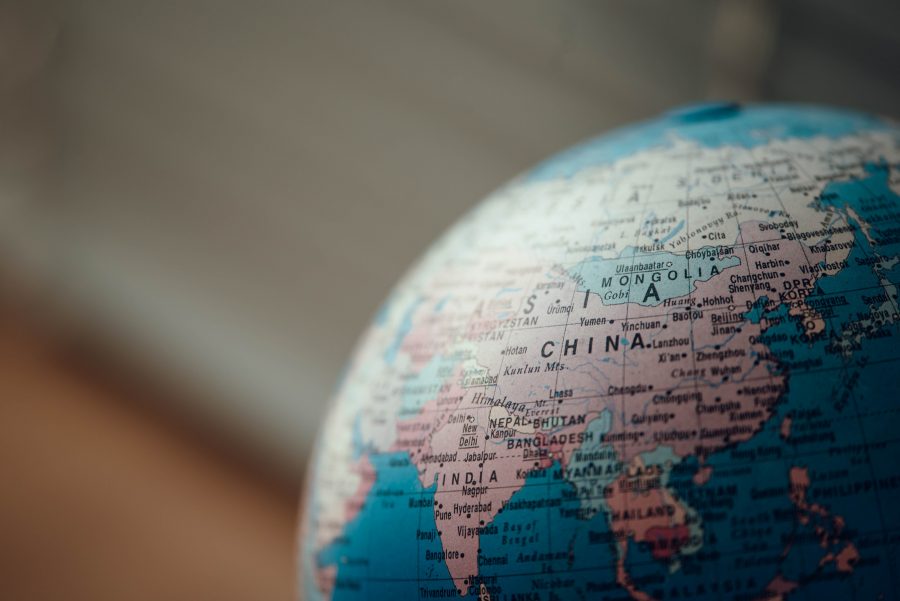 Things are starting to get serious.

Digital currencies are no longer in their infancy, they have grown up. The world has shown that the infusion of finance and technology is inevitable, paving the way for the brainchild of that union – financial assets on the blockchain. After a decade of existence, cryptocurrencies have found its place in the mainstream, interestingly enough, it’s in the coffers of their main opposers- governments.

Countries deviating from their firm stance on decentralized currencies have come out with official positions on issuing their own sovereign currency, or a Central Bank issued Digital Currency [CBDC].

China, a known crypto-skeptic, revealed that they have been developing a People’s Bank of China digital yuan for a few years, in association with several domestic banks and payment platforms. Mark Carney, the governor of the Bank of England stated that a digital currency backed by a slew of central banks could replace the dollar as the world’s reserve currency. Even India, the outright crypto-hater, which has a draft law sentencing those who “mine, generate, hold, sell, transfer, dispose, issue or deal in cryptocurrencies,” to 10 years in prison, has propped up the idea of a “digital rupee.”

Why is there a ‘sovereign rush,’ to enter digital payments then? Is it for coercive establishment of a soft-power? Or could this be to fortify one’s global standing via digital currencies in an increasingly connected world?

Either way, the dye has been cast, and the rush to develop a digital currency has taken over the market. 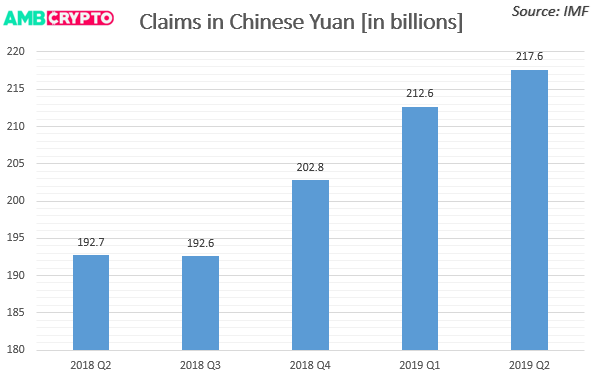 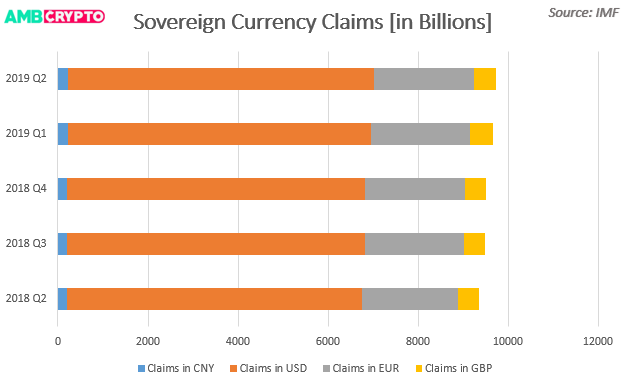 For the better part of a decade, China has been making sure that its Renminbi has been finding payment channels beyond the Asian continent. In 2009, China began to expand its Cross-Border trade RMB Settlement project, focusing initially on the Hong Kong markets, as this note from the HK Monetary Authority alluded to,

” It expanded from serving personal customers to enterprises and institutions, and transformed from just one-way repatriation of renminbi cashnotes to two-way flows of renminbi, marking a crucial step forward to the internationalisation of renminbi.”

This “internationalization,” of the RMB caused Hong Kong to become an “offshore renminbi centre,” and the effect continued as the renminbi, in 2013, became the 8th most traded currency leapfrogging the Korean won [KRW] and the Hong Kong dollar [HKD]. A year later, it took the 5th spot on SWIFT’s most traded currency charts, behind the JPY, GBP, EUR, and USD.

China’s intentions of becoming a competitor to the dollar came to the fore in 2015 when the IMF gave Renminbi the status of a “reserve currency,” and added the RMB, to its Special Drawing Rights basket in October 2016. Notably, Stuart Oakley, global head of Flow FX at Nomura, in 2013, stated that over $5 trillion of unallocated central bank reserves were owned by China, and these could very well be in yuan.

Keep in mind that over the past few years, the Chinese hold over the global currency game increased while the United States inches away from the global leadership, owing to Donald Trump’s isolation-esque policies.

While China is focusing on building channels for their digital yuan, the United States is fairly quiet. From the trade war, Middle East pullout and internal concerns, the Trump administration has made their intentions on cryptocurrencies clear, calling them a “national security threat,” while paying little to no attention to what’s cooking up in Beijing.

Calling cryptocurrencies value based on “thin air,” President of the United States tweeted,

“I am not a fan of Bitcoin and other Cryptocurrencies, which are not money, and whose value is highly volatile and based on thin air. Unregulated Crypto Assets can facilitate unlawful behavior, including drug trade and other illegal activity.”

The current administration’s trend may prove detrimental. Unlike the Internet age and the technological boom, America may be more engrossed in handling domestic-private cryptocurrency regulations than set up their own digital-USD to tackle an imminent digital yuan. Or, being the beacon of capitalism and free enterprise that it is, Washington D.C. could tap a private company to curate a digital asset, with a platform, channels, supporters, customer base, that the US could use to confront China?

In theory, it could. A currency that offers the dollar [in full, or in part] is based on cryptography, present on a blockchain, held in wallets, and one that can be disseminated to world markets, both institutional and retail can be tapped. Two such projects, with [some of] the above merits, are floating in the crypto ecosystem – Libra and Ripple’s XRP.

The ills, from the US government’s perspective, starts from the head of Libra – Facebook. The social media giant has had several run-ins with regulators culminated in the Zuckerberg hearings of 2018 owing to privacy concerns. Libra’s partners suggest a more private-currency for their world, rather than government-assisted.

Staying stable, especially as the world’s economy trips up, is paramount for Libra, and they’ve addressed this with a flexible Reserve. The Libra Reserve will comprise fiat currencies and short-term government deposits [based on reports, the currencies that will likely be housed in the Reserve will be -USD, GBP, JPY, EUR, and the USDSGD].

From a more philosophical point, Libra themselves have deemed China’s CBDC, more enemy than a competitor. David Marcus, lead of the project stated that Libra is the hope for Western democracy in light of Beijing’s plans to launch a digital currency.

XRP and Ripple are, or try to be, on good terms with the US administration.

In a bid to differentiate XRP from not just Libra but the rest of the cryptocurrency field, Brad Garlinghouse, CEO of Ripple and Chris Larsen, the Executive Chairman penned a letter to the US Congress in an appeal to “not paint us [Ripple] with a broad brush.”

The Ripple duo said digital currencies have a “opportunity,” to “complement,” the US dollar and not replace it. This support for the US dollar, in light of the larger cryptocurrency community’s disdain for fiat, presumably speaks more about Ripple’s growing need to link up with the government in light of the Chinese threat, using their existing cross-border payment systems, the cryptocurrency XRP.

In an interview at the Economics Club of New York, Garlinghouse reiterated the San Francisco giant’s pro-regulation stance. He stated,

“We’re pro-regulation, we’re not trying to change that,”

Banks, financial institutions and payment providers are interlinked within the RippleNet using the in-house products of xCurrent, xRapid and xVia. Several banks in the United States, Canada, Thailand, India, Japan, the Middle East among others are already part of RippleNet or engaged in talks. 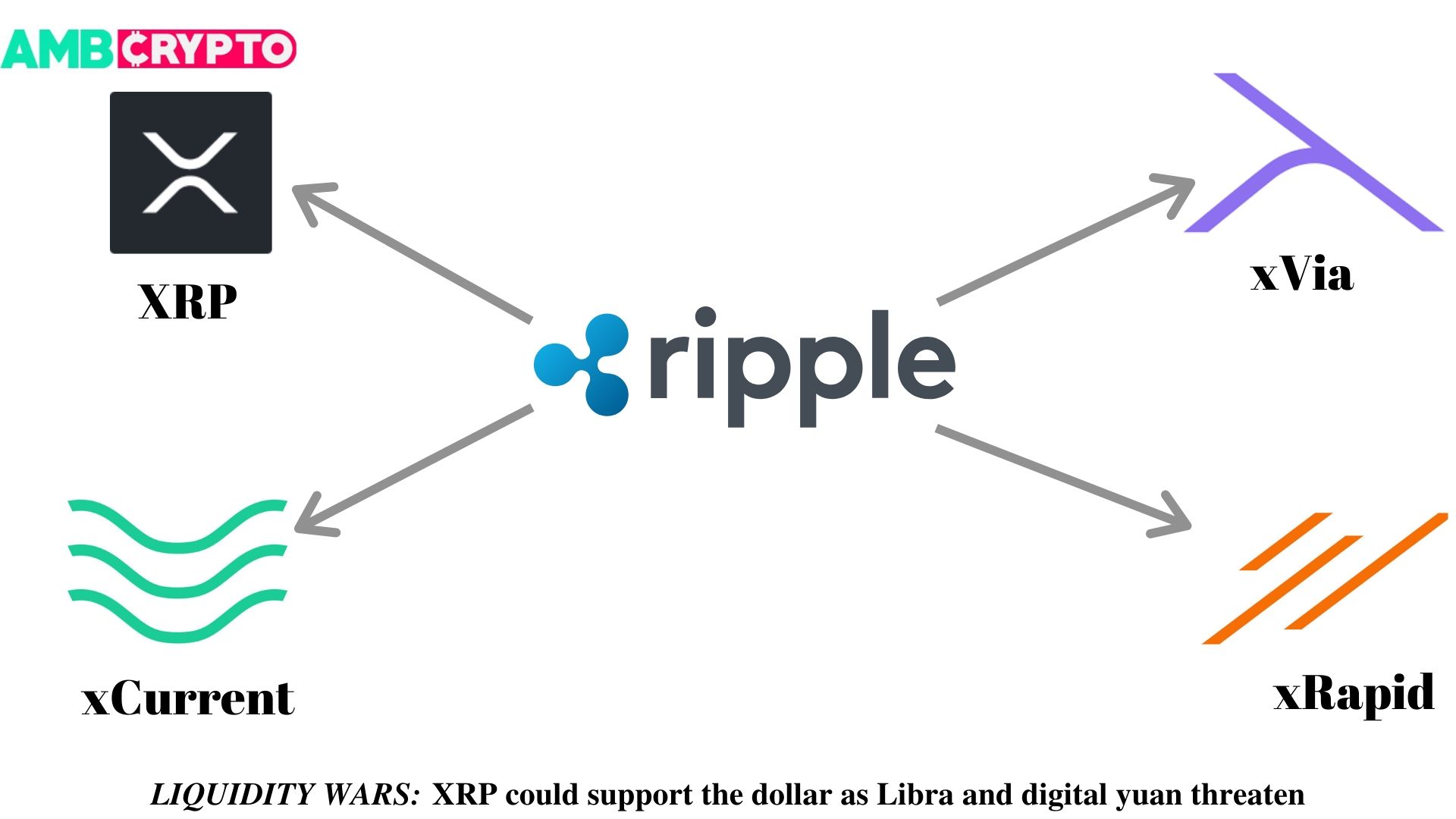 Miguel Vias, head of XRP markets at Ripple, and former CME executive stated, back in 2017, that the Bank of England conducted a ‘proof-of-concept,’ with Ripple while Bank of Japan hinted at XRP being akin to ” legal tender at some point.”

Every payment entity be it financial institutions, merchants or central banks, has dipped their toes, if not taken a headfirst plunge, in Ripple. Regulation is also something that the payments giant is not shying away from, but embracing [with caution]. All this leads to a firm base of institutional and sovereign liquidity, an essential prerequisite for a ‘world currency,’ or something that the US could tap.

Ripple is already ‘friendly,’ with regulators, and, unlike Facebook, they are partnering with regulatory-compliant banks and financial institutions rather than purposeful retail partners. XRP is expressed in dollars and is controlled by one company and one company alone. Ripple, in the eye of the United States, is and will be far better than Libra, and it could even help Washington D.C. tackle the threat of China.

The overarching objective for any currency is to gain so much liquidity that it is accessible globally; the desire to be a ‘world currency.’ Just like the dollar prides itself on universal access, the goal, or rather milestones, of a digital world currency would be to gain sovereign approval, have appropriate backing, be spearheaded by an economic powerhouse [to maintain stability] and have a global presence.

China is curating their yuan to do just that, and they do not need to jump over any regulatory approvals to launch, Libra, while exhibiting all the above characteristics and more, does.

While the strength of the yuan is apparent, its digitization will be primed upon how the Chinese government manages it. Early reports point to, payment giants Tencent and Alibaba,  mammoth Chinese banks – the Industrial and Commercial Bank of China, the Agricultural Bank of China and the Chinese association of Banks, Union Pay will receive the first roll-out of the digital currency. Charles Evans, a cryptocurrency and economic consultant at Chyden LLC told AMBCrypto how the Communist Party deals with the “roll-out,” of the digital yuan will be key. He said,

“If they micromanaged its use, then it could suffer the same fate as the Venezuelan Petro. Then again, if they mandated its use for all cross-border transactions, then it could become quite big.”

With international use, comes the question of adoption. On asked what would see greater adoption, Libra or the Chinese CBDC, in the future where the two were in the market, Mati Greenspan, senior markets analyst at eToro went with the latter. “Gun to my head, I’d probably say China CBDC,” said the analyst adding that the regulatory loopholes that Libra would be required to jump through will not be likely for the digital yuan where 1 digital RMB is equal to 1 regular RMB.

“Libra would need to teach people about the exchange rate. Not an easy task”

The alternate, to a Federal Reserve backed US dollar coin would be to tap an existing payments giant, that already has banking ties, is compliant with regulators and operates on its own network, which Ripple and XRP, for the most part, have. Ripple’s letter to Congress coupled with the mounting tensions about Libra and the Chinese digital yuan, makes them a possible candidate for a ‘supporter to the US dollar.’

Alex Krüger, a cryptocurrency analyst and economist told AMBCrypto that XRP, standalone, cannot and should not be compared to either Libra or the Chinese digital yuan. Apart from ‘pure liquidity’ of the currency, liquidity of the markets where the currency operates matters. Dollars, are not simply seeing growing investment, but rather ‘dollar assets,’ and there is no way XRP can achieve that standing.

“An ideal reserve currency has (among many other things) highly liquid financial markets, not just currency liquidity. Thinking that XRP could fulfill that requirement is outright delusional.”

One thing that Ripple has is corporate relationships. Ties with banking and payment partners the world over are beneficial for Ripple, and if expanded, government officials will be keeping a close eye on the payments’ giant, said Evans. Alternatively, Ripple could move from private ties to public. He told AMBCrypto

“An alternative strategy might be to stitch together the economies of small nations initially, as that is where the greatest inefficiencies are, and where the potentially greatest benefits could be realized.”

On the other hand, there does exist a digital currency that is not bound to any government, is not operated by a Federal Reserve, or PBoC, is borderless,  blockchain-based, and a decade-old- Bitcoin.

The veteran cryptocurrency, although, will never find universal government embrace, from the individual perspective is already the “world currency,” but from a sovereign perspective is the “currency villain,” as it dilutes the control of government’s monetary authorities.

Digital currencies backed by private institutions and central banks are fast approaching. The dollar, with Libra and the digital yuan threatening, is left exposed, with Ripple primed to play a supporting role. With reach in the banking world, built infrastructure and the insistence on regulatory support, XRP could help reinstate the greenback as the “world currency,” at least for now.