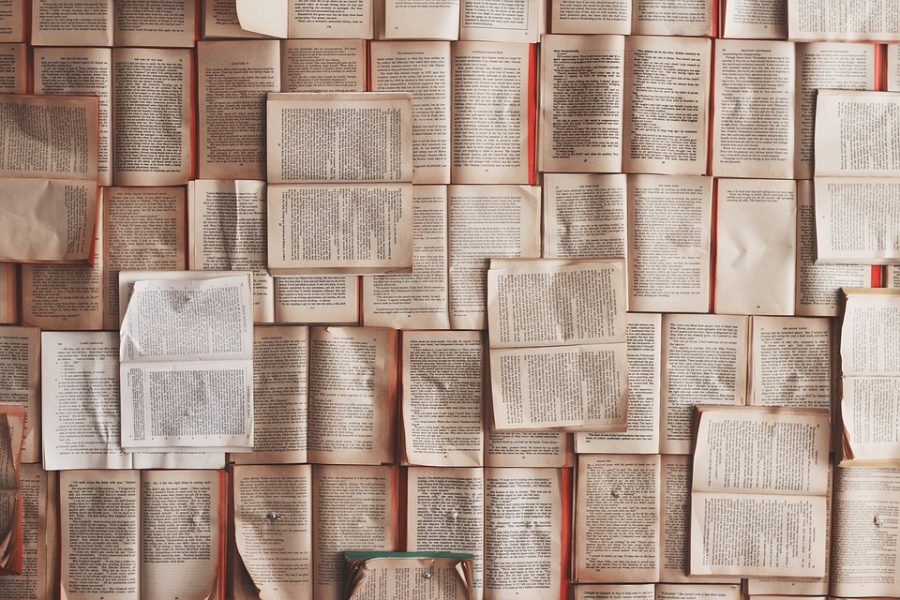 Institutional investors have changed the way we look at Bitcoin.

In December 2013, six years ago, Bitcoin, for the first time, broke the $1,000 ceiling. Many skeptics had then suggested that this was as far as the cryptocurrency would go. For the most part, they were proven right as the price failed to break into four-figures for the next four years. However, once 2017 arrived, $1,000 was not the only ceiling to break.

The price of Bitcoin was always seen less as a testament to its use case and more as a reflection of investor interest. In 2017, that principle was seen in action as the price not only broke $1,000, but ended the year with a massive ATH that was just shy of $20,000 during what would be remembered as the December 2017 retail-induced Bitcoin bull run. Since then, the focus of the markets has been to lure in retail investors.

Quantity over quality, these investors, signaled by the CME and the CBOE’s introduction of Bitcoin Futures and positive comments by the SEC, flooded the market. Alas, this was momentary as the following year, a retail exodus caused Bitcoin to drop from well over $14,000 to $3,200 by the close of 2018.

Despite the fact that Bitcoin ended 2018 by dropping by over 75 percent and the overall market cap plummeting by $700 billion, the market still had hope. Institutional investors, either pleased with the volatility or the rapid price discovery unfolding, were rushing into the decentralized currency space.

Undoubtedly, the biggest institutional player to step into the cryptocurrency fold was the Intercontinental Exchange [ICE], the parent company of the NYSE, who curated Bakkt, a never-before-seen digital asset platform that would bring together the institutional world with crypto. Initially slated for a November 2018 launch, the platform was delayed by eleven months.

At the time of the ‘Crypto-Winter,’ with several retail investors opting out of digital currencies, ICE’s enthusiasm was contrastingly positive. Jeff Sprecher, CEO of ICE, on asked in late-November 2018 if digital assets would survive, responded with an ‘unequivocal YES.’ He added,

Won’t get Knocked Down

However, ICE wasn’t the only one launching Bitcoin Futures. The second-largest stock exchange in the world, NASDAQ, together with Investment giant VanEck, signaled its intention to secure approval from the SEC for the first-ever Bitcoin Exchange Traded Fund [ETF]. Earlier in 2018, the Gemini’s Winkevii twins saw their ETF application struck down by regulators.

Bitwise Asset Management, the crypto-focused investment company together with the NYSE subsidiary, NYSE Arca, also filed for a Bitcoin ETF. Resilient as ever, Bitwise’s ETF application followed on from their 2018 denial.

ETFs hence, became another institutional focal point in 2019, with VanEck and Bitwise, together with their exchange partners, hoping that the SEC would allow either of them to initiate the first-ever publicly traded Bitcoin product, one that many market participants believed would be hoarded and possibly manipulated by the bankers on Wall Street, rather than retail investors.

Gone with the Wind

With so many new institutional aspirants in the cryptocurrency field, the winds were strong in the Windy City. Chicago’s biggest regulated exchanges, the Chicago Board of Options Exchange [CBOE] and the Chicago Mercantile Exchange [CME] which plied cash-settled approved and regulated Bitcoin Futures contracts were feeling threatened.

A Bitcoin ETF and a physically-delivered BTC derivative contract would shake-up things in the market, and the Chicago-duo would lose their grip. Hence, their performance in the institutional 2019 equation would also prove detrimental.

However, prior to the close of the first quarter of 2019, in March, the CBOE pulled out of the Bitcoin Futures race in light of the market seeing reduced volatility, Bitcoin failing to see a burst, and CME eating into its market.

Fly me to the Moon

While Bitcoin was dropping as a retail-centric asset, major mainstream news websites were detailing the lustre of cryptocurrency in the eyes of institutional investors. A Forbes article stated that Bitcoin’s next bull run could be fueled not by individual retail interest as it did in 2017, but by major financial players coming into the fold.

“Moon,” hence was on the mind of every market participant as Bitcoin began the year. Interest from large scale financial companies, both in absolute cryptocurrency and in trading products derived from decentralized currency, would result in a massive backing to the market. Also, more than money, the legitimacy that institutional investors would bring to the market would be unparalleled.

With products like Futures and ETFs backed by ICE and NASDAQ, financial giants began an embrace of digital currencies, not merely in trading externally, but by launching custom crypto-products. Fidelity Digital Assets, which launched at the end of 2018, began its crypto-venture by rolling-out a custody service following which, it unveiled its trading platform in May 2019. Furthermore, Fidelity didn’t just jump into the prospect of digital currencies because the asset was skyrocketing in the second quarter of the year; it did so because Fidelity saw a legitimate demand.

According to a survey done by Fidelity Investments between November 2018 and February 2019, 72 percent of the respondents sided with buying investment products holding cryptocurrencies, and 57 percent preferred direct purchase.

Tim Hockey, CEO of brokerage company TD Ameritrade, a firm that allows its customers to buy Bitcoin Futures on the CME, stated in mid-2019 that interest in Bitcoin trading was rising. Putting it quite succinctly, he stated,

“Clients are asking for it.”

Interestingly, Ameritrade, as recently as a year ago, purchased a stake in ErisX, a digital assets trading platform that would allow the brokerage giant access to direct Bitcoin trading at some point, according to Hockey.

The three prongs to a cryptocurrency assault on the institutional market, from an investment point of view, were – the Bitcoin ETF, Bakkt and CME’s Bitcoin Futures.

Even though the two frontrunners for the Bitcoin ETF, VanEck and Bitwise, didn’t see their applications go through (One on their own accord and the other through the SEC’s denial), their stance on the matter was positive.

The main issues opposing approval were the questions of custody, market manipulation, and immaturity. Bitwise aimed to tackle these issues by convincing the SEC through a series of reports detailing the progress made by the cryptocurrency market. Perhaps, the most stunning of revelations made by Bitwise was via their March report, which stated that 95 percent of cryptocurrency exchanges purport volume that is “fake or non-economic in nature.”

Arguing that the price deviation of Bitcoin has dropped across top exchanges which pose “real volume,” custody has developed, Futures has increased to almost a third of the real spot market, and arbitrage opportunities have declined, Bitwise stated that the market is ready for a Bitcoin ETF. However, after two delays in 2019, its application was shot down by the SEC in October 2019.

Not seeing it as a defeat, Bitwise appreciated the SEC’s “feedback” and even called the rejection – “progress.” It stated,

Bakkt: The new kid on the block

ICE’s brainchild crypto-project seemed like it would never happen. In June 2019, eight months after it was slated to launch, Adam White, COO of Bakkt, stated that the exchange would begin its test phase for an official launch in September 2019.

After a significant amount of market fervor, with some analysts opining that it caused a price push, Bakkt finally commenced trading on 23 September, and what a failure it was! The hotly-touted market catalyst crashed the market as its first day saw a paltry 71BTC worth volume traded. This slow start wasn’t a one-off as the same slumping volumes persisted for a month.

Bakkt’s push came on 25 October, with trading volume skyrocketing to $10.3 million as Bitcoin surged by 40 percent in a day. The relatively high volumes persisted till 8 November when another ATH was seen at $15.6 million. On 27 November, the digital assets platform saw over 5,600 contracts traded, taking the volume to a massive $42.2 million and the institution finally making its mark on the industry. 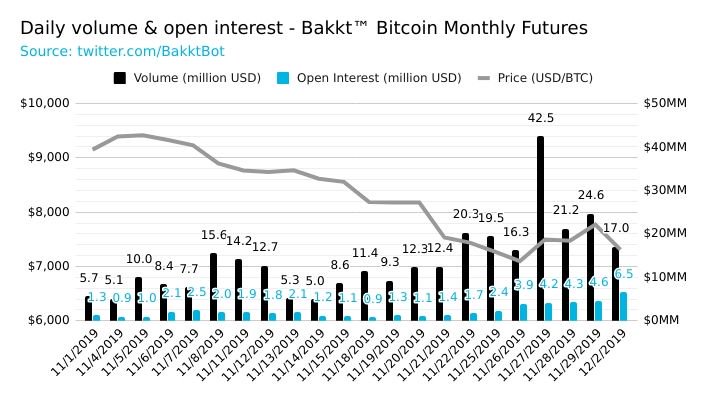 Just like any other typical Futures market, Bakkt’s massive movement followed price fluctuations or triggers of the same, through November, with every high coinciding with massive movements. To institutional investors, unsurprisingly the crux of Bakkt’s base, this parallel movement was a testament to their close attention to the digital assets space.

While the Bitcoin ETF didn’t happen and in light of the fact that Bakkt is still in its early days, the CME saw a massive movement for the better part of 2019. Since becoming the only significant player in the regulated Bitcoin space following CBOE’s exit in March, its volume has been skyrocketing. Ushered by Bitcoin’s massive price movement in the second and third quarter of the year, CME’s volumes surged to over 7,200 contracts from a YTD model, in August, as stated by Tim Court.

Bakkt’s initial failure saw CME’s volume see a spillover as institutions initially chided the physically-delivered BTC Futures in favor of the cash-settled alternative. However, that movement was short-lived, as Bakkt’s volumes continued to rise and CME declined. It should be noted that November’s Bitcoin price volatility saw CME’s volume also rise, but ICE’s venture saw a greater share of movement, indicating that institutional investors are backing Bakkt.

The chart below shows the volume of Bakkt/CME, with Skew Markets stating that the trend for Bakkt is “clearly positive.” 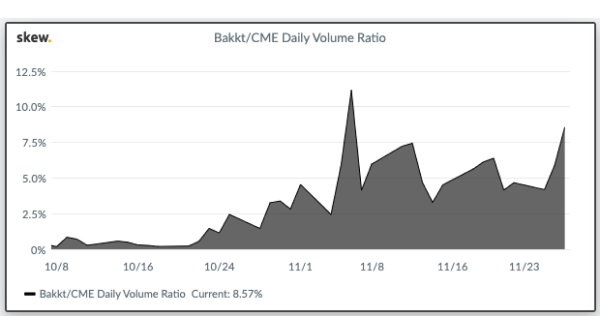 “Firstly, traditional institutions require regulations to curb money laundering. Next, I feel that even with current technological advancements, the existing infrastructure is still not ready for investments of that scale. It’s probably due to the fact that there is not enough liquidity currently to sustain investments of this magnitude.”

He, however, also argued that once the required “infrastructure” is put in place, the status quo mentioned above can dissolve and institutions can flood the market once again.

Positive signs are aplenty, from the SEC paying heed to Bitwise’s proposals to Bakkt’s actual launch. Infrastructure, that Zhou veered towards is key, and if that infrastructure is focused on building efficient custody and thwarting manipulation, it could go a long way in maintaining institutional interest. Tokenyz founder Claude Waelchli, speaking to AMBCrypto, seconded infrastructural importance and said,

“The regulatory landscape is getting clearer, the institutional-grade infrastructure is being built out, such as custody, also, the derivatives markets relating to that is being established as well – futures and options are now available too, and all these things lead to increased investor confidence and more institutions coming on board.”

He added that one of the main reasons for ETF rejections is the lack of “real price discovery” in the market, as viewed by regulators. However, Waelchli is optimistic that an ETF will be approved sooner, rather than later,

“With recent developments and build out of institutional grade market infrastructure this position is becoming harder and harder to justify…In a nutshell, I think the direction is very clear and we should see the SEC approving its first ETF sooner rather than later.”

There’s no doubt that Futures will be a key issue in the Bitcoin market of 2020. The question is which facet will dominate it and by how much? The answer to that question depends on two key players – institutional investors and regulators. Market participants, if willing to better the Futures field, should focus their efforts on creating a more robust infrastructure for price discovery, custody, and real liquidity.

Needless to say, Bitcoin Futures will once again dominate in 2020.

Ethereum’s gas fee makes it hard to use its blockchain: Justin Sun