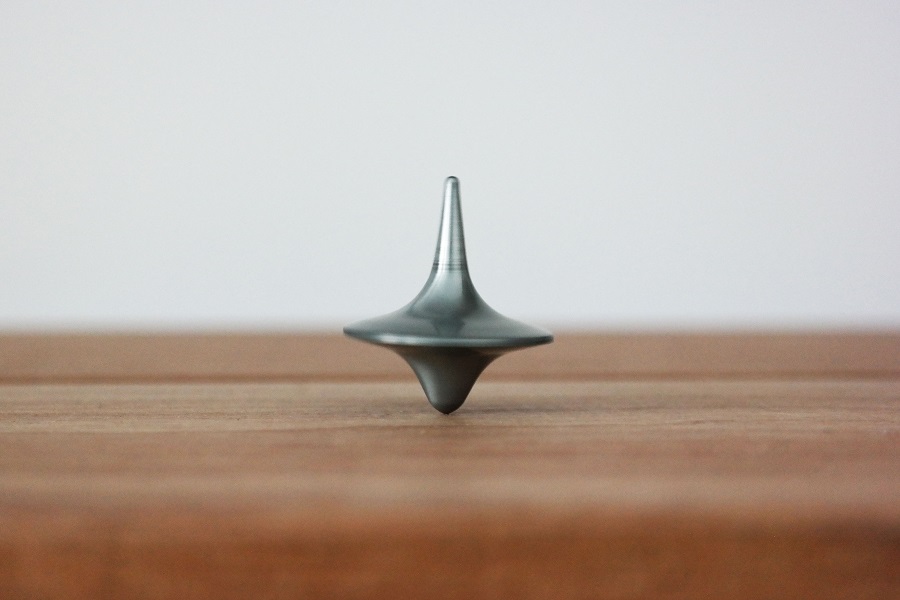 For most people, buying cryptocurrencies is just a click away; there are multiple options, credit cards, debit cards, and CashApp. However, even with a number of on-ramp options, the go-to option most people choose is buying a stablecoin.

Why? Simply due to the fact that they are stable and are backed by assets with mild or no volatility, hence providing a relatively safe store of wealth, at least in the short-term.

As another year after the year of the stablecoins (2018) comes to an end, it is time to reflect on how stable these stablecoins are.

Most of the time, Tether is the first thing that pops up in one’s head when the word ‘stablecoin’ is uttered; and rightfully so, due to the absolutely huge share of the stablecoin market it holds.

However, does it also mean that Tether is the most stable stablecoin?

Perhaps, or perhaps not. This article will take a deep-dive into the fundamental aspects of what makes a stablecoin stable, while also analyzing the performance of the top 5 stablecoins this year, to gauge how far they’ve come.

Stablecoin – What is it?

A stablecoin is a type of cryptocurrency whose value is collateralized to the value of an underlying asset, which could be asset-backed and be on or off the chain. Or it could be Seinorage-styled aka algorithmic, where it makes use of complex algorithms and smart contracts to maintain the price equilibrium.

A testament to Stablecoins’ Stability

Theoretically, stablecoins need to maintain their peg with the collateralized asset but practically, they don’t. Hence, a stablecoin with the least deviation from its peg should empirically prove to be the most stable of the lot. Other aspects that add to making a stablecoin ideal would be its liquidity and trading volume.

Attached below is a graph that exhibits the variation of stablecoins’ prices over the course of 2019. It is apparent that the highest skew from the peg was observed in TrueUSD. Following it were GUSD, PAX, and USDT. 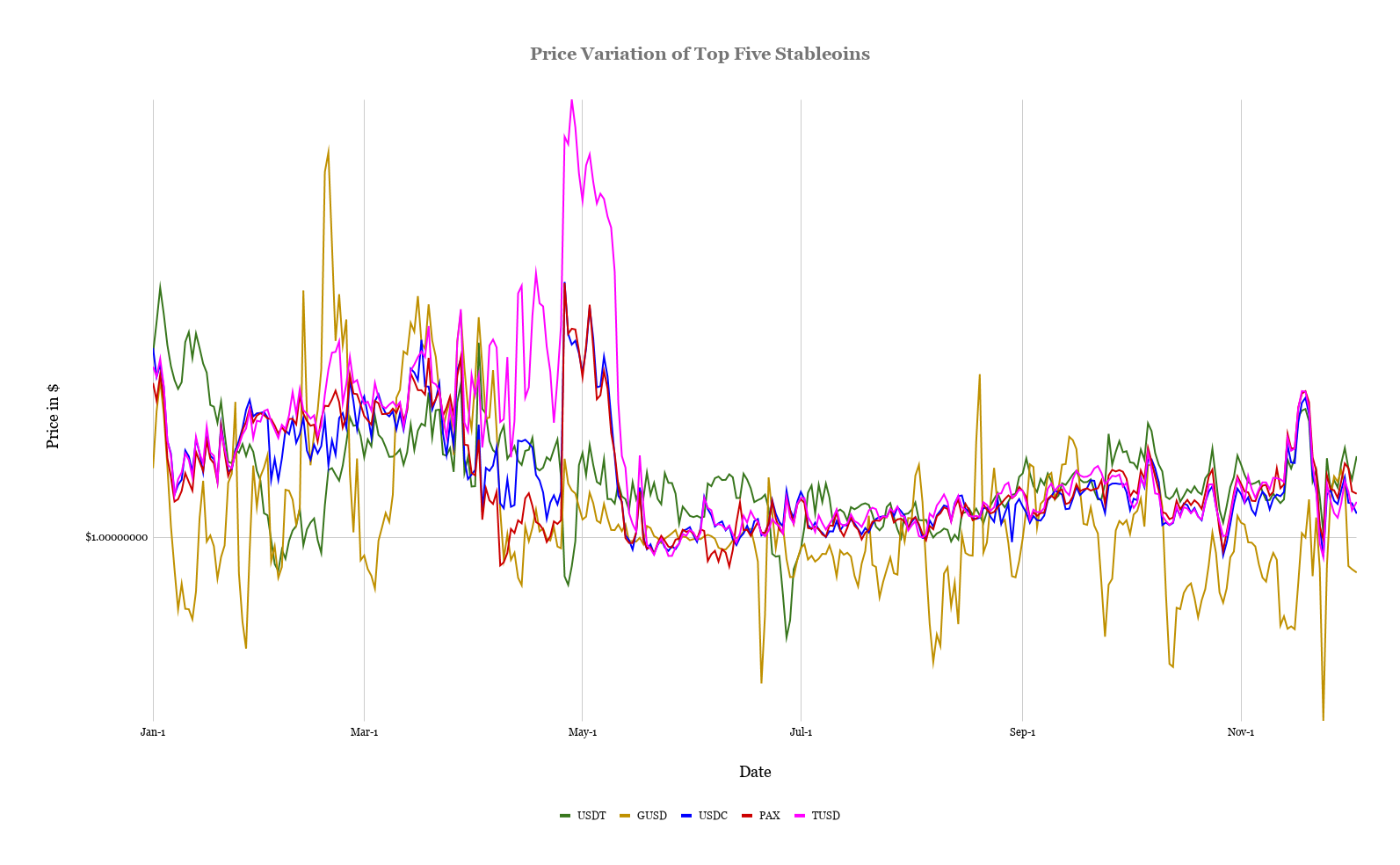 Although almost all of the stablecoins had a huge deviation from the peg in the first half of 2019, it was reduced by a huge factor in the second half with the exception of GUSD. TUSD recorded the highest positive surge on 28 April, where 1TUSD was worth $1.04165. With 1 GUSD reaching about $0.98306, it was the only stablecoin whose peg collapsed the highest against the collateral. 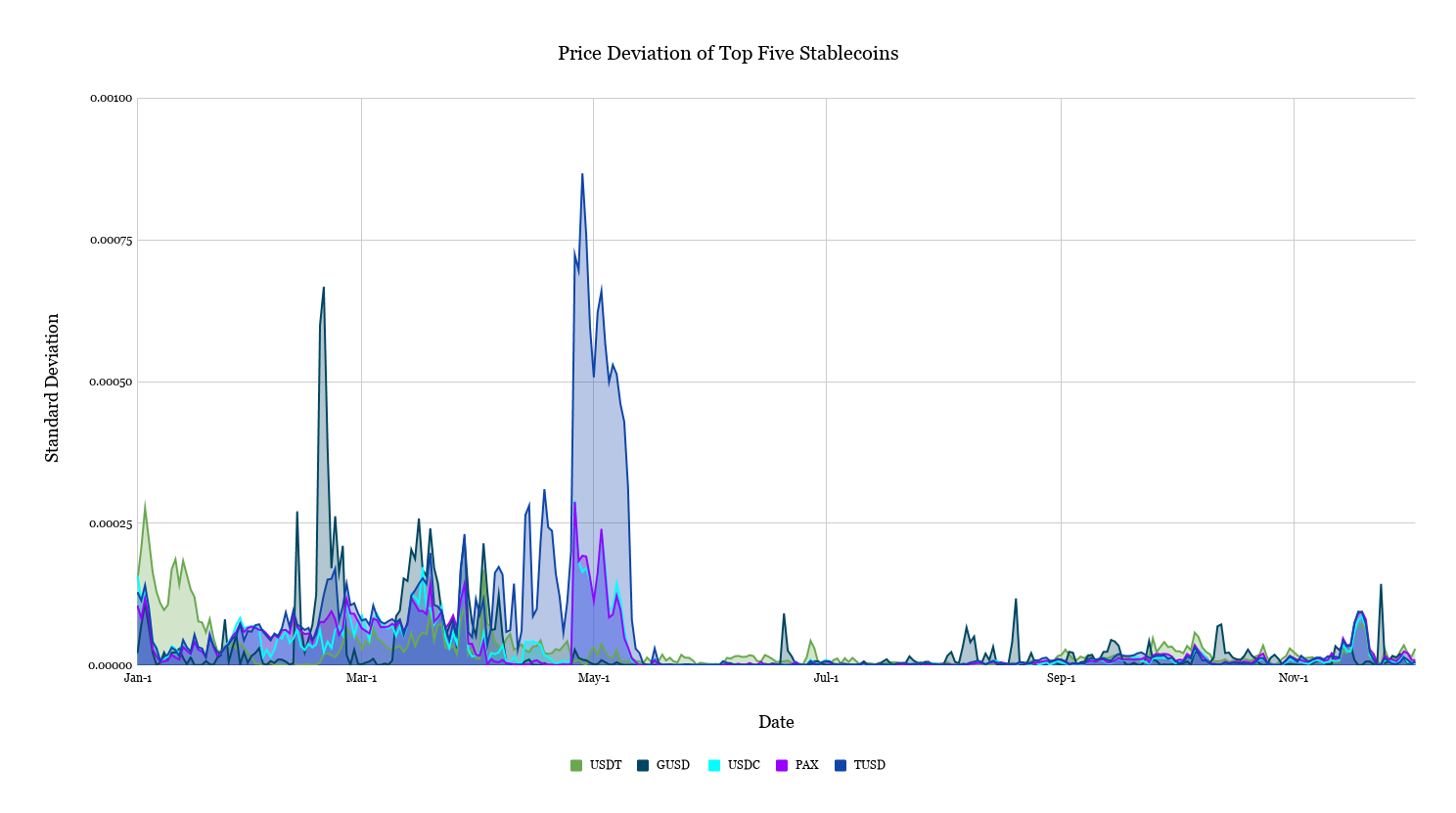 Following GUSD was Tether, which fell to as low as $0.99073. Other stablecoins stayed very close to their original peg. Among these stablecoins, the highest standard deviation was ranked as TUSD, GUSD, PAX, and USDT.

Although stablecoins are pegged to a stable asset like the U.S dollar, it is not 100% stable, the price deviates from its peg. An important thing to understand here is that this deviation/variation from the peg is based on three factors,

Speaking to AMBCrypto, Adam Back, Co-founder and CEO of Blockstream, stated,

“Sometimes time preference pulls tether over par unrelated to risk perception… Tether wire in/out fees plays a part also. It can maintain a disparity based on risk perception or demand for longer if the difference is less than the fee structure to arbitrage it out”

Tether is undoubtedly the highest in terms of market cap and trading volume. Prolifically growing to about 4.1 billion USDT in circulation, Tether has a monopoly over the stablecoin market. Tether’s market share among the top 5 stablecoins in terms of trading volume is in excess of 83%, while the other 4 stablecoins cumulatively contributed the other 17%. 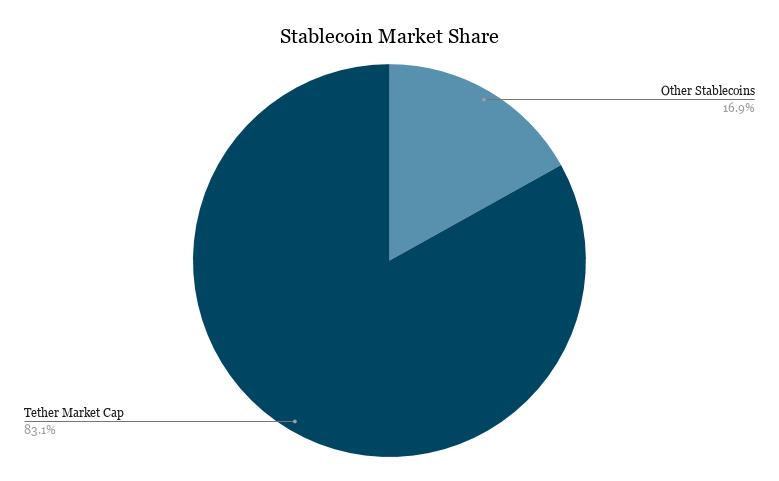 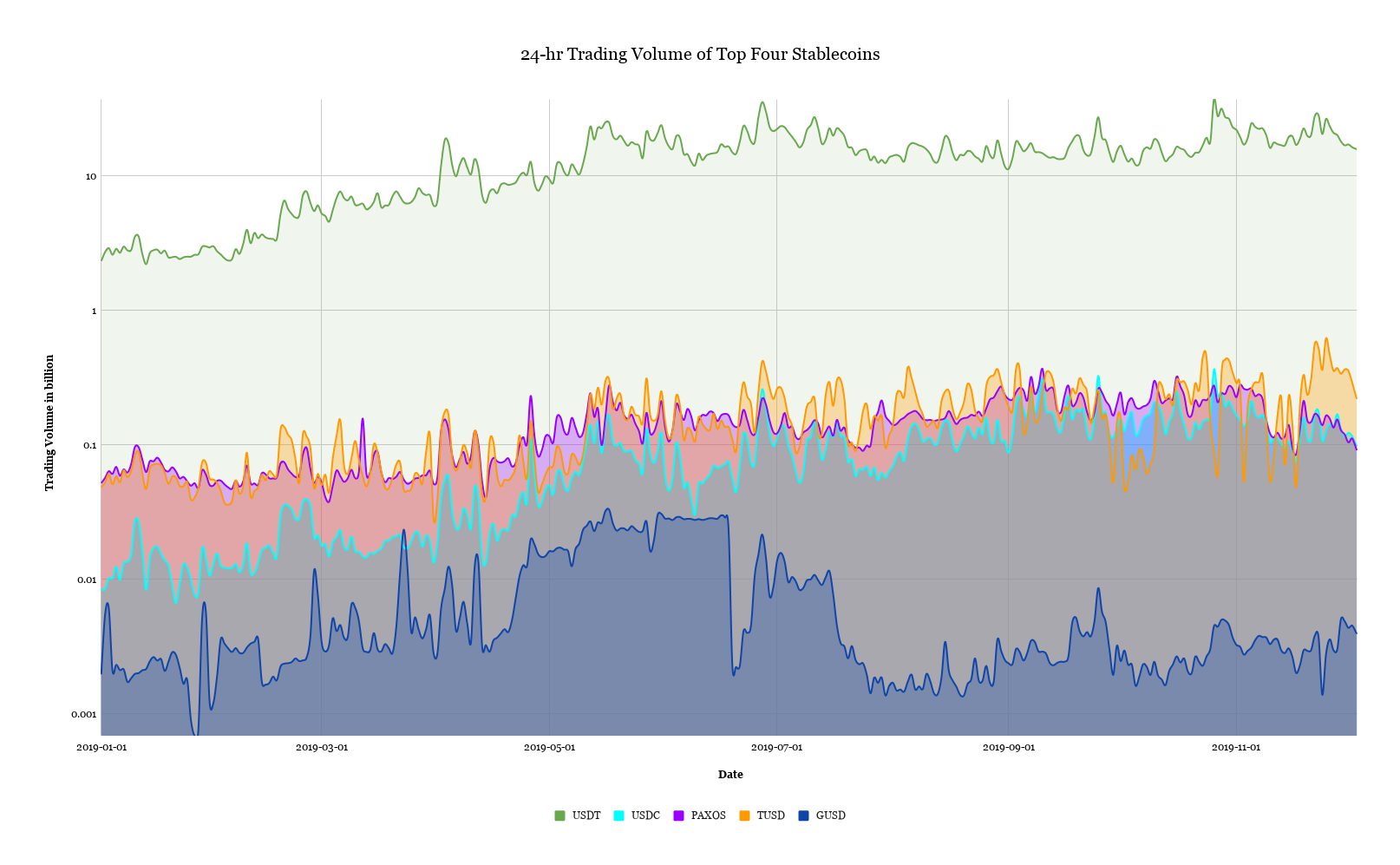 The obvious distinction of Tether’s gargantuan share in comparison to other stablecoins is visible in the graph above.

“To say tether has the highest volume is an understatement, it has 97% and the rest of the competitors vie within the remaining 3%!”

TUSD, USDT, and GUSD have been the most unstable stablecoins in terms of change in peg and deviation. USDC and PAX, although contributing to only $670,70 million of the total market share, aren’t widely used.

In Tether’s case, its massive adoption could also play a vital role in steep deviation from its natural peg. Apart from being used for crypto-related transactions, Tether is also used for international payments and for quicker settlements.

So, why does Tether have so much sway over the markets even though it is technically not as stable as USDC or PAX? Probably because Tether was the first stablecoin to make it work and help early enthusiasts adopt Bitcoin on a large scale. Although there have been stablecoins that far surpass aspects like regulation and transparency in comparison to Tether, the majority of the crowd sticks with Tether. It could be due to this particular reason that USDT has been the go-to stablecoin and this justifies the convenience over some of the critical factors it so desperately lacks.

There have been quite a few stablecoins launched in 2019, some of these by exchanges like Binance. The GBP-backed stablecoin, BUSD, was announced by Binance in June and launched in September 2019. The famous, crypto-collateralized DAI, is worth mentioning in this list too and has been active since late 2017. Moreover, Multi-collateral Dai, a feature that was under development for more than 5 years, was launched in October 2019, allowing users to use other cryptocurrencies as collateral. Some of these tokens include Augur’s REP token, Brave’s BAT token, etc.

Bitfinex, the company closely related to Tether, is reportedly looking to launch a stablecoin backed by gold. The details about this project are yet to be disclosed.

Additionally, in what was one of the year’s major hypes, Calibra’s David Marcus revealed that Facebook’s Libra might also take a creative turn by launching a slew of stablecoins backed by the US Dollar, Euro, Sterling Pound, etc.

Since there is inherent volatility to stablecoins, it can be used to one’s advantage via arbitrage trading. Arbitrage trading is a forgotten discipline of trading in the crypto-industry, mainly due to slow transaction settling times. Factoring the slow settlement times, arbitrage trading would make it more tedious due to the requirement of huge amounts of capital. However, the introduction of Liquid Network with stablecoin integration might just resuscitate arbitrage trading.

With Liquid, it is possible for arbitrage trading between exchanges using BTC and USDT. Additionally, Back mentioned,

“Less capital is needed to close arbitrage spreads between exchanges if the arbs can be done in a few minutes cycle, manually or with arbitrage bots. At Blockstream we’re looking with continuing Liquid adoption for spreads between exchanges to close, and more exchange liquidity to be available as a result and thereby reducing risk as the balance can be taken off the exchange when not trading and be ready to trade within 1-2mins.”