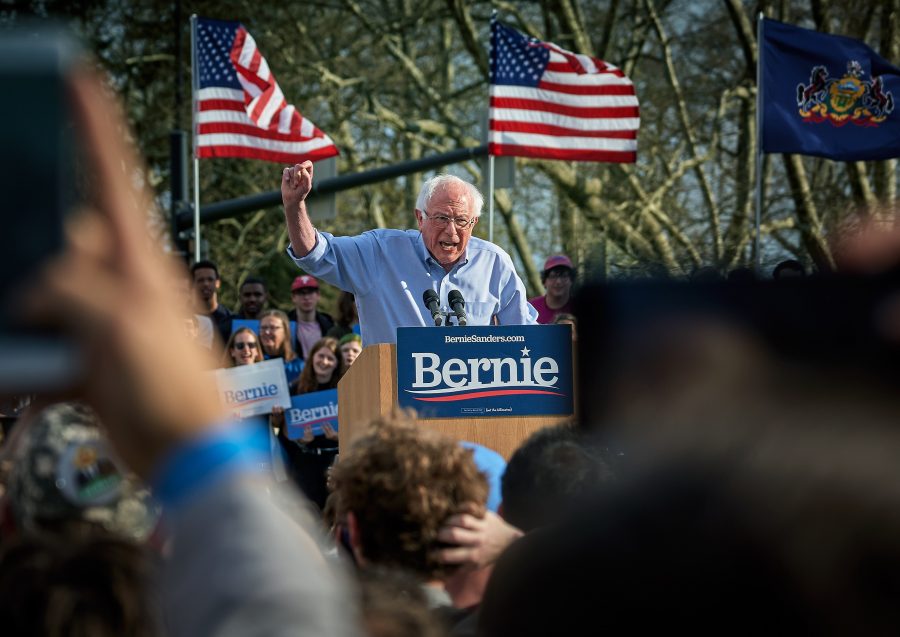 Bitcoin could have a stake in Iowa.

Bernie Sanders, the septuagenarian from Vermont is one of the frontrunners for the Democratic Party’s nomination, in addition to Elizabeth Warren, Joe Biden, Pete Buttigieg, and crypto-favorite Andrew Yang.

As voting gets underway in the Iowa caucus, to many it serves as a litmus test for who will be the pick to stand against Donald Trump in the November general election. According to CNN, since 1972, the winner in Iowa has gone on to become the Democratic party nominee 67% of the time.

Why is this important for Bitcoin? Three reasons. Sanders, Yang, and you guessed it – safe haven, once again.

Not exactly your cyberpunk bemoaning governments and banks, or your suit-and-tie investor plying trades on the CME, but Sanders does play to some of the talking points of Bitcoin. Anti-establishment, breaker of big-banks and an all-round threat to Wall Street is good for decentralized currency, but there’s more.

One of the lesser-known issues that Sanders is known for, one that could boost Bitcoin, is his Internet policy. “Every American household will have affordable, high-speed Internet by the end of his first term,” states his campaign page, but through inevitable government action. The policy states,

“High-speed internet service must be treated as the new electricity — a public utility that everyone deserves as a basic human right. And getting online at home, at school, or at work shouldn’t involve long waits, frustrating phone calls, and complex contracts and fees meant to trap and trick consumers.”

More Internet could mean more adoption. Across the aisle, conservatives and libertarians have called out the policy for government force, high costs, and the dismantling of entrepreneurs.

On the contrary, a Sanders presidency could spark a slew of regulations opposing Bitcoin’s growth in the U.S and globally. Hence, the Bitcoin community isn’t ‘feeling the Bern’ just yet. But, the price might.

They might be getting yanged [yes, it’s a word]. Andrew Yang, the high-flying late-bloomer in the primary race, fresh with his “MATH” hat, flagship UBI proposal dubbed the ‘Democratic Dividend,’ and comedian Dave Chappelle by his side, is a favorite for the cryptocurrency community.

His stance on crypto is clear – regulations are required and they need to be at a federal level.

According to a November 2019 blogpost, Yang said that “other countries, which are ahead of us on regulation, are leading in this new marketplace and dictating the rules.” He added that cryptocurrencies represent “a large amount of value and economic activity.”

Yang, in a recent Bloomberg interview, claimed that regulations are necessary, but there isn’t much that can be done to stop crypto.

“People who are investing in these currencies are finding a way to do so, and make use of their investments. I don’t think that you could impede it [crypocurrency] if you tried.”

Based on early projections, Iowa is going for Bernie, but Andrew Yang isn’t exactly at a loss. The pro-sensible crypto-candidate, despite falling behind Sanders, Warren, and Buttigieg, is poised to beat the former Vice-President and according to many, ‘the frontrunner,’ Joe Biden. A defeat that could be good for Bitcoin.

The final reason is one that has been overstated since the beginning of the year. Bitcoin has been on a ‘reactive roll,’ surging by over 30 percent in 2020, buoyed by military and biological outbreaks.

On 3 January, as the U.S killed Iranian military commander Qasam Soleimani, Bitcoin, gold and oil moved up. The cryptocurrency saw a 3.5 percent hourly gain. Days later, as Iran retaliated, Bitcoin rose again. In a week, the cryptocurrency added $1,000 to its value.

During the close of January, as China-originated coronavirus cases began piling up, Bitcoin saw yet another rise. From 23 January to 30 January, Bitcoin rose by over 15 percent, taking its price over $9,500, the first time since October, rising out of a falling channel and moving above its 200-day MA.

This safe-haven nature of Bitcoin will come into play as Sanders remains well on course to win the Iowa caucus, sending shivers across Wall Street.

Four years ago, a similar situation played out when Sanders and Trump were likened to go head to head with their contrasting anti-establishment stances. Back then, a similar ‘Bitcoin as a hedge’ sentiment played out with unlikely hodlers,

Why do I get the feeling that the best hedge against a Sanders or Trump nomination may be buying bitcoin?

It might be 2020, but Bitcoin still has more riding on the election than what you might think.

India should consider launching its own CBDC: WazirX’s Nischal Shetty