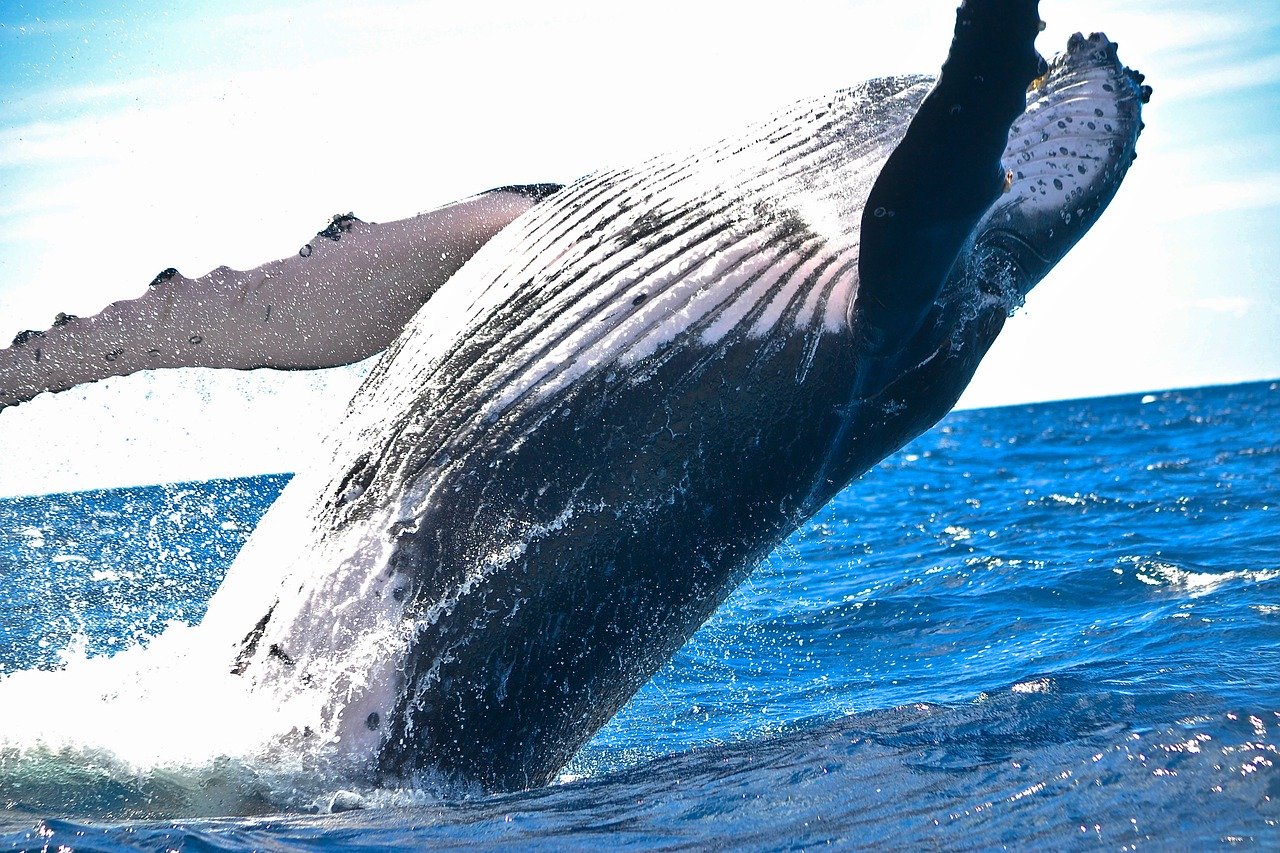 Cryptocurrencies and their proponents take a lot of pride in the former’s decentralized nature. In fact, if you ever hear someone pitching Bitcoin to someone else, you can be pretty sure that decentralization and a lack of central authority will be one of the first features he/she will highlight. A pitch like that is well and good, but how is it coming out in practice? Well, a recent report seemed to answer that question in the negative. The reason – Whales.

The report in question, Santiment Pro’s latest weekly report, assessed 850 of the market’s top crypto-assets. Following the same, it observed that over 50% of the total supply for 727 of these crypto-assets was found in the top 100 addresses alone.

Look no further than some of the market’s top cryptocurrencies – Bitcoin, Ethereum, XRP, and Chainlink. The supply of all of these crypto-assets continues to be dominated by whales.

Take Bitcoin, for instance. At the time of writing, over 61% of Bitcoin’s supply was in the hands of “BTC millionaires” or whales aka addresses with more than 100 BTC. This is a staggeringly huge percentage, with smaller addresses with less than 10 BTC controlling just over 14% of the supply. 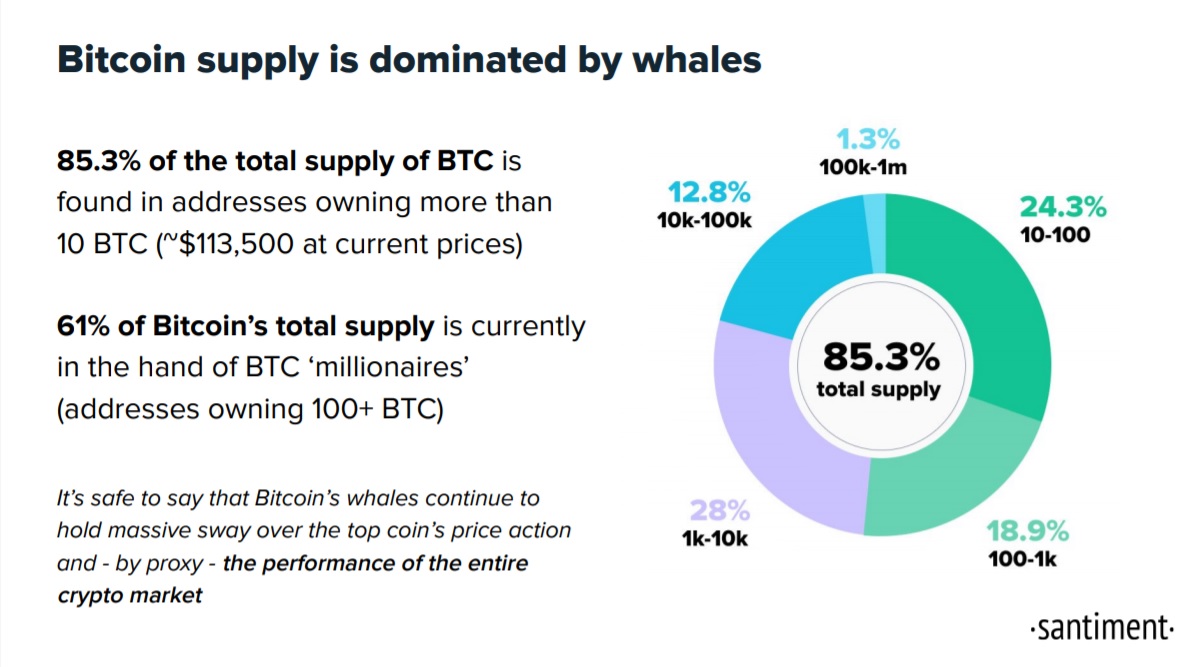 However, there is perhaps a good explanation as to why this is the case. After all, it is the world’s oldest and most active cryptocurrency and most of its biggest hodlers were part of the first wave of crypto-investors at a time when BTC wasn’t priced as high as it is now. But, that doesn’t change the fact that Bitcoin is increasingly centralized in the hands of whales, with the sheer number of them recently climbing to an all-time high.

Chainlink, one of the market’s best-performing cryptocurrencies this year with YTD returns of 851%, hasn’t been immune to such whale action either, with Santiment observing that 94% of LINK’s supply was held by addresses with more than 10,000 LINK. In fact, according to some, 70% of the supply is being held by 9 addresses alone – LINK Marines, they are called. 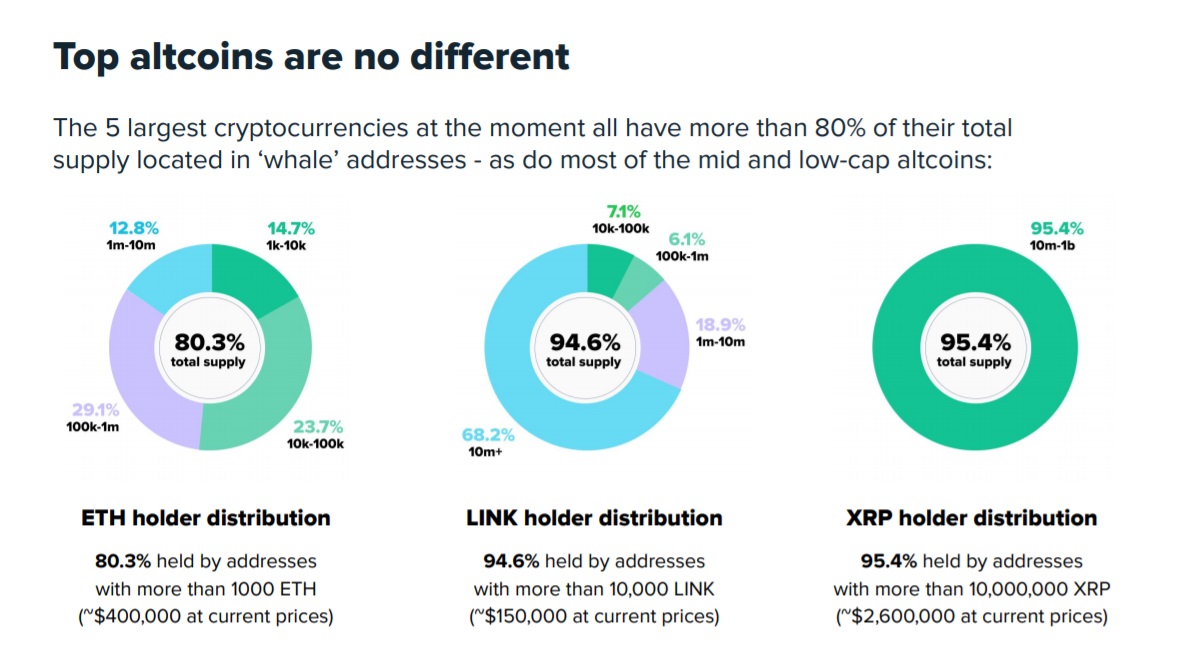 Chainlink has been at the end of a lot of criticism lately, with many in the crypto-community accusing it of being a pump/dump 4chan meme with a market where 90% of the volume is fake. Now, ascertaining the truth of that isn’t the focus of this article, but the fact that these “Marines” hold so much sway on LINK’s market movement is definitely something concerning, especially since many believe that LINK’s recent price movements are just a dead cat bounce.

These are all crucial findings, especially in light of the fact that decentralization has been one of the market’s calling cards for a long, long time. However, while many right now would be calling for these whales’ heads (Or fins) to usher in a radically new form of decentralization, that may not be the solution. In fact, doing away with whales (Not that it is possible or very likely) may not even be the right thing.

Take Bitcoin’s example – over the years, the price action of the world’s largest cryptocurrency has often been dictated by the movement of these whales. Such “whale loyalty” is evident when these whales’ actions are traced against the cryptocurrency’s bull cycles. Not only was it observed that whales’ accumulation spurred such bull cycles and propped up Bitcoin’s price, but it can also be argued that the same minimized the impact of bearish trends in the market. 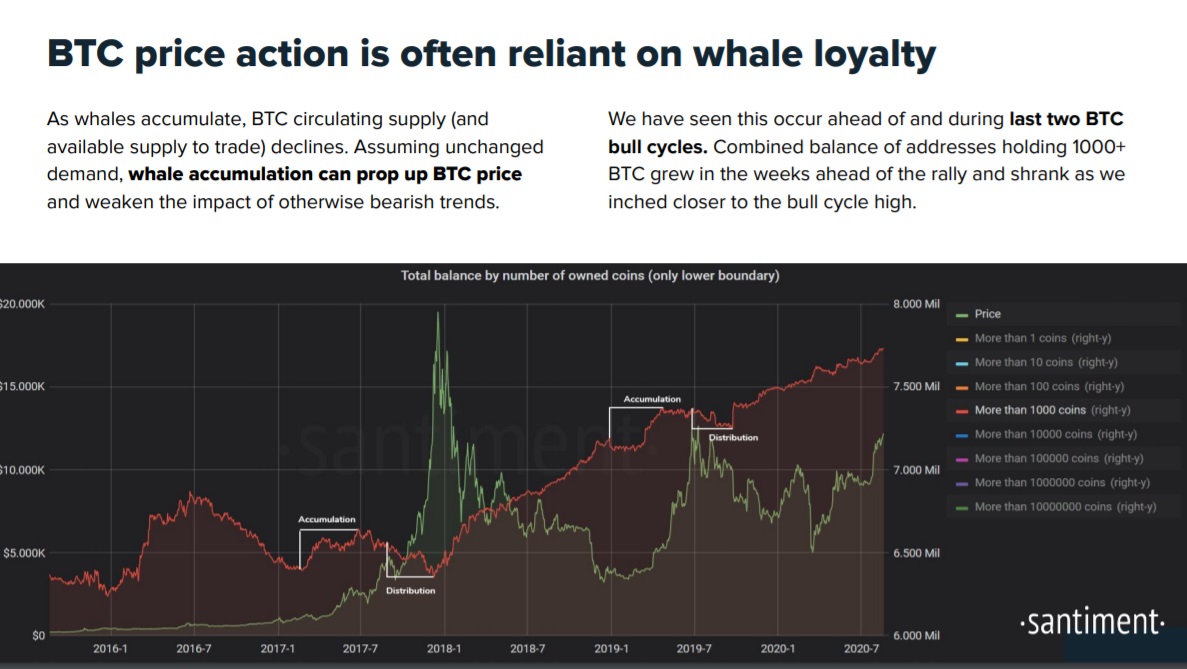 The perception of Bitcoin as “f*ck you money” and its emergence as a finger to the established order has cultivated this notion that centralization is wrong and decentralization is godsent. That may be so, but as is evidenced by the involvement and impact of whales in the price market and sectors like mining, some form of centralization is inevitable. Full decentralization, ergo, is perhaps too big a dream.

Related Topics:Bitcoin whalesfeaturedSantiment
Up Next