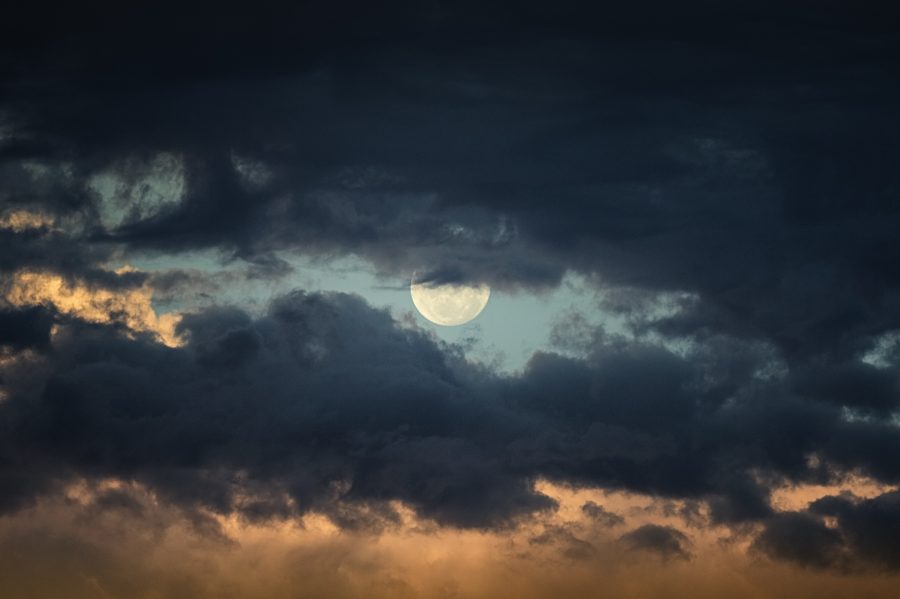 Bastions of trade and custody, cryptocurrency exchanges have ballooned in significance and wealth. The parallel gain in the price of the currencies they store has been an added boost. Around 15 percent of the finite supply of Bitcoin is held by 7 of the richest exchanges in the industry, according to a study by Glassnode.

What’s concerning is that these seven, while being robust and secure, are not cordoned-off from controversy.

Binance, which held over 240,000 BTC, [per the report] was subjected to a $40 million BTC hack in May 2019. Bitfinex, holding 214,600 BTC, has been in a ton of legal disputes owing to its parent company’s alleged association with Tether. Coinbase, the regulated-exchange holding the most Bitcoins [almost 1 million] was in hot water a year ago, in light of the Neutrino acquisition scandal.

With the ‘bastions’ tag withering away, the metrics to measure an exchange’s health comes into question. And volume, certainly, cannot be relied upon alone. Back in March 2019, Bitwise revealed to the SEC that over 95 percent of exchanges purport data that is “fake or non-economic” in nature. Only 10 exchanges can be classified as “real.”

The onus hence, shifts to what other metrics can be used to gauge health. Trackers of exchange data have included comprehensive measures, ranging from web-traffic to exchange reserves.

The facilitation of trades, which compound volume and liquidity metrics, is dependent on corresponding exchange reserves. With top exchanges holding a huge amount of crypto-in-reserve, their proportion and spread to actual volume is an efficient marker of health.

A case in point is HitBTC. A Cointelligence report back in May 2019 had claimed that the exchange is allegedly insolvent, looking at reserve information. Proof of reserves by AML tracker Coinfirm stated that the exchange, on 8 Apri 2019, held only 245.2 BTC in their hot and cold wallets, citing it as the “first trigger.” Snapshots of reserves a month and a half later revealed that Bitcoin in reserves had dropped to 243.4 BTC.

HitBTC’s reserves relative to top exchanges painted a bleak picture of its health. 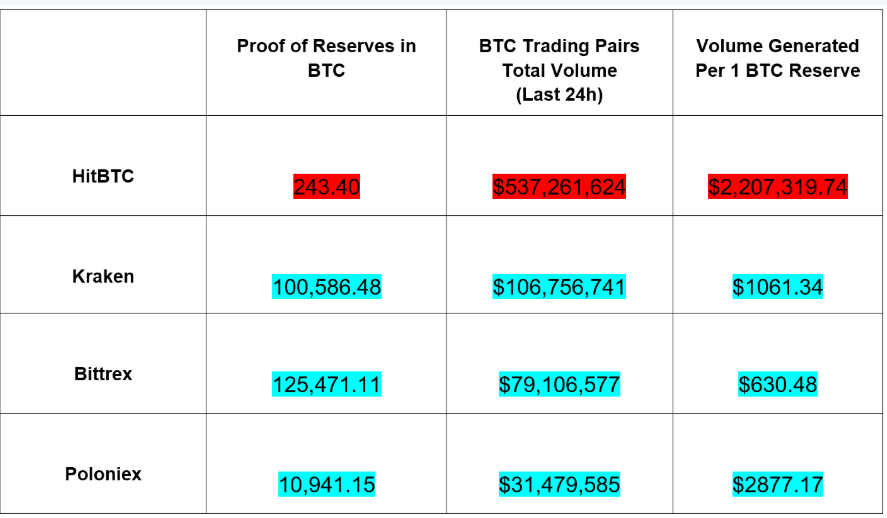 Low reserves coupled with withdrawal issues, lofty fees, and the exchange shrouding information about its team led Cointelligence to question the exchange’s reliability, giving them a score of 4.5 on 10. Coinfirm, in their analysis, gave HitBTC a risk level of “HIGH” with an 86 C-score.

Reserves, as much as a case for assessing an exchange’s health, are also a cornerstone of the industry. The reserve argument for Bitcoin-backed banks was made by Hal Finney, in what CoinMetrics co-founder Nic Carter called the “institutional approach to scaling Bitcoin.”

In Carter’s view, banks [backed by Bitcoin] could be “auditable, transparent…and accountable,” allowing depositor verification based on “varying levels of reserves,” and their risk appetite. While this approach was meant for “financial institutions” of Bitcoin, the relevance to the current-age custodians of Bitcoin is apparent.

Exchanges operating a fractional reserve could give birth to negative ripple effects. Carter justified this with the case of Canadian exchange Quadriga which failed the reserve test, a precursor to the breakdown. He said,

“Quadriga would have refused to prove their reserves, and would have rightly come under suspicion, pre-emptively saving users a lot of heartache and lost coins”

The cost of fractional reserves for exchanges that have a large stake in Bitcoin’s supply leverages their downfall. Hence, transparency is monumental and as Carter puts it, “users can adequately assess the risk of insolvency.” In his words [and emphasis],

“A proof of reserve involves proving what you actually own, and it is generally meaningless without a corresponding proof of liability, which is a proof of what you claim you owe.”

Source: How to scale Bitcoin, Nic Carter via Medium

Integrity is a precept in the cryptocurrency world, often lost. A measure of health, both in foundation and risk-assessment, depends on an exchange’s reserves that can back their trading activity. Reserve health, hence, can be argued to be made public information, for customers to deposit and leverage their cryptocurrencies.

Bobby Ong, CoinGecko’s co-founder, told AMBCrypto that the aim of the Trust Score would be to “determine the exchange with the best real liquidity,” while being ” much more independent of an exchange’s reported volume.”

From the data-aggregator’s and customer’s perspective, a public revelation of an exchange’s reserve will prove beneficial. However, all is not transparent just yet.

While transparency might be a key assessor of an exchange’s health, it could be a detractor in three ways:

In movement, public knowledge of an exchange’s reserve could send an unnecessary worrying signal. Philip Gradwell, Chainalysis‘ Chief Economist, told AMBCrypto that when exchanges reveal their balances and addresses, customers need to be updated during times of transfer in order “to prevent panic.”

Certain exchanges publicly reveal these transfers before whale trackers publish the same with alarm bells ringing and the markets speculating.

🛡️In the next hours Bitfinex will migrate part of its BTC cold storage towards the address: bc1qgdjqv0av3q56jvd82tkdjpy7gdp9ut8tlqmgrpmv24sq90ecnvqqjwvw97 as part of its address rotating policy.
All funds are safe.

We will be moving USDT funds to a new cold wallet address. One large transaction coming. Funds are #SAFU.

Gradwell added that this method of public announcement would be “impractical” for changes and transfers in exchange wallets, especially of substantial amounts. Furthermore, safety also could be compromised. Hackers, seeing more lucrative targets in exchanges boasting higher reserves, of more valuable coins could make exchanges “vulnerable to hacks.”

In what was a similar sentiment, Clément Pavué, a data scientist at Scorechain, told AMBCrypto that it could make exchanges “a target for hackers” and hence, some might prefer “hiding their numbers.”

This compliance consideration could create “general privacy concerns,” said CMC’s Chee as exchanges want to keep under wraps the number of cryptocurrencies they hold relative to the rest of the market.

While certain coins’ on-chain metrics allow for transparency, in addresses albeit, some currencies do not have this provision. Furthermore, exchanges that have a low reserve cannot be differentiated with similar addresses that hold a comparable range of cryptocurrencies, furthering the divide.

Exchange competition can be measured, among other parameters, in reserves held. CoinGecko’s Ong stated that reserves are seen as a “competitive point” and hence, keeping it hidden keeps competitors guessing. Chee echoed the same, claiming that a reserve requirement should not affect security and create a “who’s richer” competition as this would be a deterrent to low-reserve exchanges that still contribute to global volumes.

Balance is key. An exchange’s reserves do play into the long-term health and short-term liquidity of an exchange, while helping customers make better investment decisions. However, it does come at a cost. The cost is security, privacy, and competition.

Information symmetry is required. No single exchange would willfully reveal its cryptocurrency balances, putting their coffers at a quantifiable risk and uneasing competitors. Centralized individuals or analyst pools only deploy resources to measure reserves in times of suspicion, or on request, something that would not align with the ethos of a decentralized ecosystem.

CMC’s Chee suggested an alternative to individual reserve representation, a method by which exchanges can “facilitate an audit of reserves.” He said,

“That way, exchanges do not need to declare their large BTC wallet address and smaller exchanges (with smaller wallets) are not unjustly penalized for simply having fewer users.”

Perhaps a combination is in order. Reserve revelation is important, but it could risk security, privacy, and competition. An audit, a simple check of reserves-requirement as stated by exchanges, in percentage, not absolute terms, could be facilitated. However, these facilitators, some would argue, would have immense power in the market, unless it was decentralized.

A system decentralized audit of exchange reserves would maintain the principle of the cryptocurrency ecosystem and would curate a better and more compliant measure for exchange health. An alternative at the very core of reserve compliance and decentrality.

Ethereum may scale to be a trillion-dollar market, if Defi remains relevant