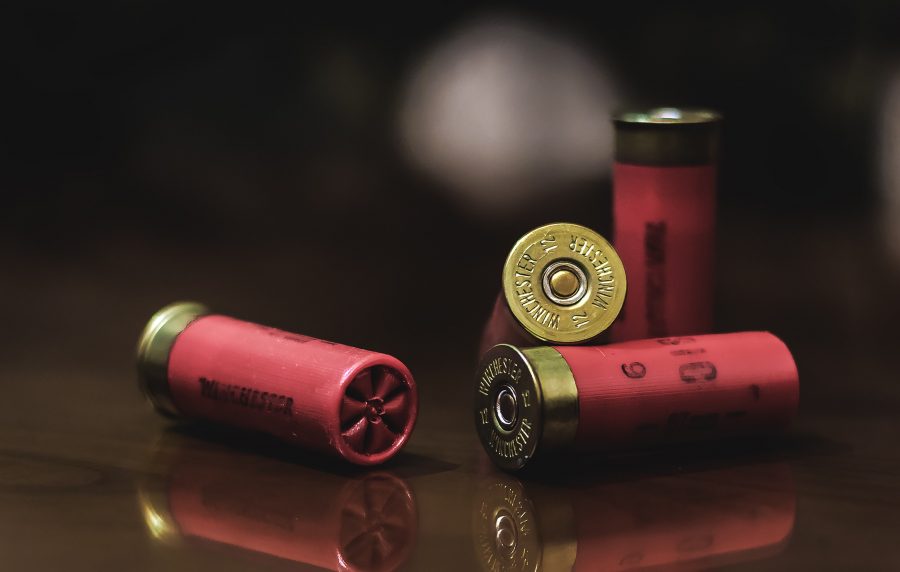 Every few years, an illicit used-case is weaponized to malign the cryptocurrency industry. In its hay-days it was the Silk Road marketplace where one could purchase guns, drugs and other illegal items, as Bitcoin became a key financial asset, its anonymity was attacked as being a tool for money-laundering, and now with a global network being used to tackle violent non-state actors, the focus is on crypto-terrorism.

The use of digital currencies to fund the operations and the attacks of terror organizations have been picking up steam. Several government officials have attacked the cryptocurrency industry on the claims that the product can be sent across borders, into terror cesspools, without a trace, evading government obstructions and retrieval to finance operatives that work against the state.

Within the US, terror financing has been used as a dog whistle against cryptocurrencies. At times regulators have even bundled other centralized digital assets to malign Bitcoin.

Take Libra for instance. Its launch in June 2019 rattled regulators so much that the US Treasury Secretary, Steven Mnuchin, stated that Facebook’s digital currency could be used to fund terrorism. He went on to speak about Bitcoin’s nefarious used-cases,

“Cryptocurrencies such as bitcoin have been exploited to support billions of dollars of illicit activity like cyber crime, tax evasion, extortion, ransomware, illicit drugs and human trafficking.”

Other financial regulators have been less wayward. In October 2019, the highest-ranking officials of the Commodity Futures and Trading Commission [CFTC], the Securities and Exchange Commission [SEC], and the Financial Crimes Enforcement Network [FinCEN], issued a joint statement on digital assets and money laundering and terror financing compliance.

Usually seen as three differing entities in US regulation, depending on the nature of the asset, the combined statement was a testament to the severity of the issue of cryptocurrency terrorism. FinCEN, which is the United States’ lead regulator on AML/CFT issues mandated “certain controls, reporting, and recordkeeping obligations for U.S. financial institutions.”

Setting the reporting mandate for the terror-financing protocols, Jay Clayton the Chairman of the SEC, stated, with respect to cryptocurrencies,

“Market participants receiving payments or engaging in other transactions in digital assets should consider such transactions to present similar or additional risks, including AML/CFT risks, as are presented by transactions in cash and cash equivalents.”

In June 2019, an OECD report on Money Laundering and Terror Financing stated that the use of cryptocurrencies for terror financing has been “observed on a large scale.” In the same report, it was stated that the weak financial and technological infrastructure evidencing the lack of electricity, internet, and other resources, could “inhibit cryptocurrency use.”

Chainalysis in January 2020 published the “State of Crypto Crime,” report detailing the use of digital assets in illicit activities. The report covered the use of crypto in six broad markets, money laundering, scams, ransomware, hacks, darknet markets and terrorism financing.

The report noted that while terror financing is nascent it is “advancing quickly.” Red-flagging its use as a “cause for concern,” Chainalysis stated that the aforementioned tech-infrastructure that prevented crypto’s use in terror activities is strengthening and had even “enabled successful terrorism financing campaigns.” 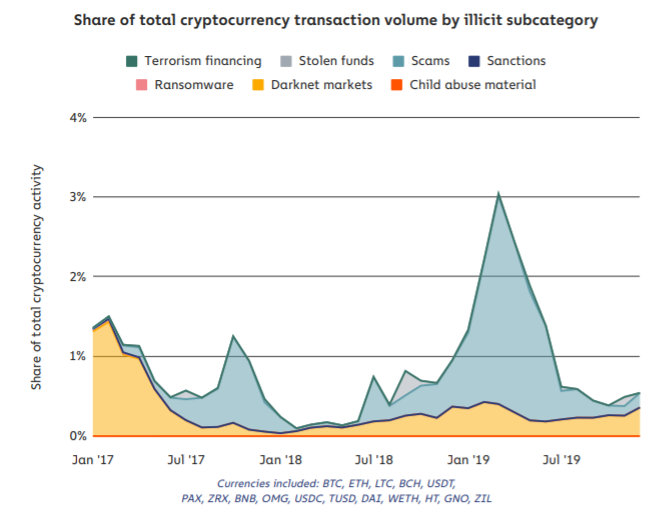 But the larger illicit picture states otherwise. Speaking to AMBCrypto, Philip Gradwell, chief economist at Chainalysis stated that the used case of cryptocurrencies in terror financing is “very small.” However, he added a strong caveat stating that the leverage of terror activities is larger compared to Ponzi schemes and scams, which amount in billions of dollars.

“Even though terrorist financing is a relatively low dollar value compared to these other crimes. It is an important one. It doesn’t take much money to finance an act of terror. So,while it’s small in volume, it’s something that we should be aware of and keep tracking.”

For activities like terror financing, compared to other crimes like money laundering, the amount is minimal, and of smaller denominations for law enforcement to take action or even notice. During the 2006 Football World Cup in Germany, a terror attack on a train was narrowly averted. Given the nature of the event, and security of a country like Germany, this attack would have sent shock waves around the world. The cost to the operatives? $500.

Cash is king: as far as criminal activities go, they are concentrated in the most liquid currency in the world, the US dollar [USD]. But for terrorists, options are plenty.

The most widely recognized terror organization in the world the Islamic State of Iraq and Syria [ISIS] is mainly funded via the exploitation of oil in captured territories, and through the taxation of citizens, enough to allow them to siphon $1 million a day, according to an Iraqi security official.

Historical artifacts are also not spared. In the summer of 2014, when ISIS was rampaging through western Iraq, they ransacked several temples and museums, and sold them through eBay, Amazon and even Facebook to finance their operations.

Each method of financing was built around liquidity – which asset could quickly be converted to spendable means? Cash was king. Bitcoin, however, does not have the best crypto-to-fiat liquidity in places like the Iraqi desert, hence terror outfits would find it difficult to convert it to liquid means. Unless done through third-parties.

In this form of financing, the concern should be less on volume and more on deciphering the parties at either end of the transaction, said Pawel Kuskowski, the CEO of Coinfirm, in conversation with AMBCrypto. He added that because of the traceable nature of cryptocurrencies and based on low volumes “we don’t see this becoming a big problem.”

Terror financing also presents a short life-cycle from sender to receiver compared to other illicit forms of financing. Given the high-risk nature of the transfer itself, Kuskowski said that for crypto-based terror financing smurf-ing, layering, and integration of transactions are not required, instead a “direct transfer” is employed wherein the funds are “received and it’s gone from the system.”

While ‘motivation cannot be inferred from data, Gradwell speculated that given the growth of small scale peer-to-peer Bitcoin networks around the world, “it could be possible that in some of the hawala networks there is an informal Bitcoin exchange rate.” The premium on domestic Bitcoin transactions compared to the global average tends to spike during political and economic crisis. During domestic market turmoils in Argentina, Venezuela, Lebanon and even Hong Kong, Bitcoin for the national fiat currency was trading at a premium on local exchanges, and on global P2P exchanges.

The growth of cryptocurrency exchanges, or other middlemen, is unlikely in such regions given the AML/CFT and KYC rigorous compliance. With the dearth of such liquidity providers, Gradwell speculated that “maybe there is a currency vendor and they’re willing to accept Bitcoin.” From there these money-service businesses could then send the Bitcoins to larger exchanges to secure liquidity.

“These people operating locally, they may be able to find someone who is willing to trade their Bitcoin for whatever the local currency is, because those people who are doing… know that they can go to one of the large exchanges and get liquidity there.”

Eye in the sky

Terror financing through cryptocurrencies, unlike other illicit activities, requires an entirely different lens. While government regulators lump money laundering, darknet payments and terror financing, the three differ in size of transactions, gateway of address, distribution of payments, and the degree of anonymity of parties.

Darknet markets rely on the monetary aspect of Bitcoin to act as a payment fulcrum to run their operations on. However, their geographical and transaction distribution is quite limited. Money laundering, on the other hand, requires a large transaction size, continuous layering to throw off authorities and limited distribution.

The use of cryptocurrencies to finance terror activities can do with smaller transactions, as its leveraging capabilities is larger, requires less distribution and can be more dispersed across a region, rather than a single account. Further, singular operators could receive and liquidate cryptocurrencies for fiat and spread it further in the region.

Cryptocurrencies’ use in terror financing requires far more nuance than meets the eye.

Related Topics:ChainalysisCoinfirmfeaturedTerror Financing
Up Next