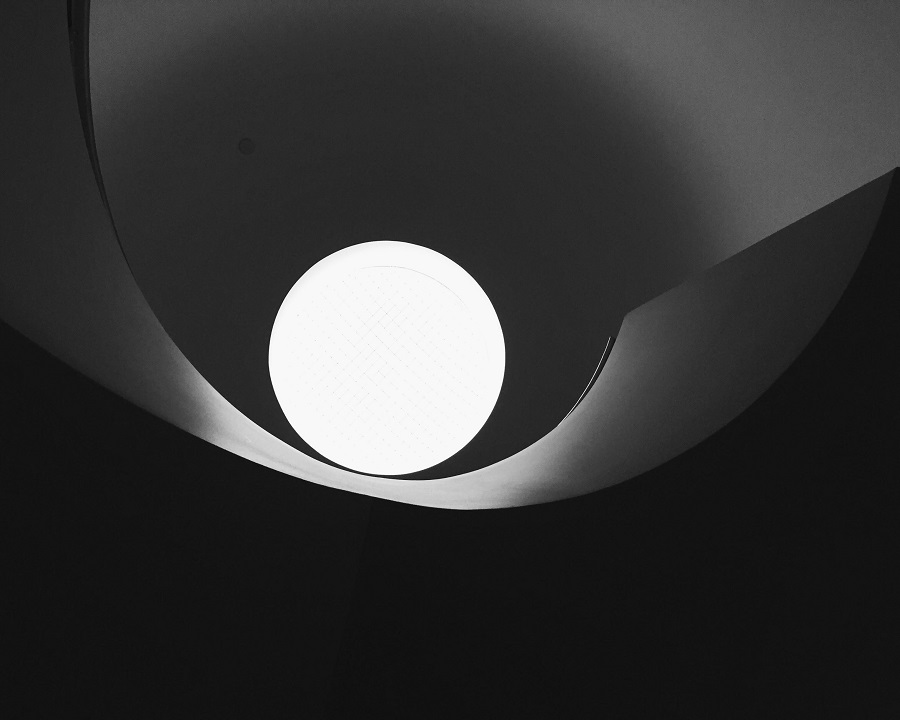 With over 100+ days left for Bitcoin’s halving, it is time to take a look at how Bitcoin might react to its 3rd halving [halvening]. Unlike previous times, the narrative around Bitcoin has changed.

The arguments on halving keep getting more pronounced as the date nears. Some argue that Bitcoin is priced in for the halving, while others disagree. The former argue that the rise from $4,000 to $13,800 was the pre-halving rally. Fundstrat’s Tom Lee is among the latter, who thinks that halving and other factors might push BTC by 100% in 2020. Has the pre-halving rally occurred or will the markets be in for another BTC upswing?

Speaking with AMBCrypto, a pseudonymous analyst Digitalik.net was among the latter.

History has shown to us two times already that halving is a very important event so I don’t believe this time would be any different. I believe halving will have an impact. The only question is – ‘How big?’

Halving isn’t a tango between the reduction in supply and an increase in demand, it is much more than that: there is a multitude of factors affecting the price.

With the current price of BTC around $8,000, the influx of capital per day should be greater than $14.4 million [144 blocks/day × 12.5 BTC/block × $8,000]. As pointed out by Tuur Demeester, for the price to remain at the $8,000 level until halving, there should be a $1.72 billion influx of capital into Bitcoin. One can only hope that the influx remains at these levels or rises higher, else, the price is set to dip further.

Generally, after halving, the supply of BTC drops while the net aggregate demand for BTC remains the same. This would induce a negative supply shock and should theoretically cause the price of Bitcoin to soar higher after halving. Due to this, there is a tendency in the community to hold/accumulate BTC before the halving, which in part, explains the rise in price. The events that unfold before the halving are a whole other thing, especially with the current hash rate situation and the collapsing price of Bitcoin. 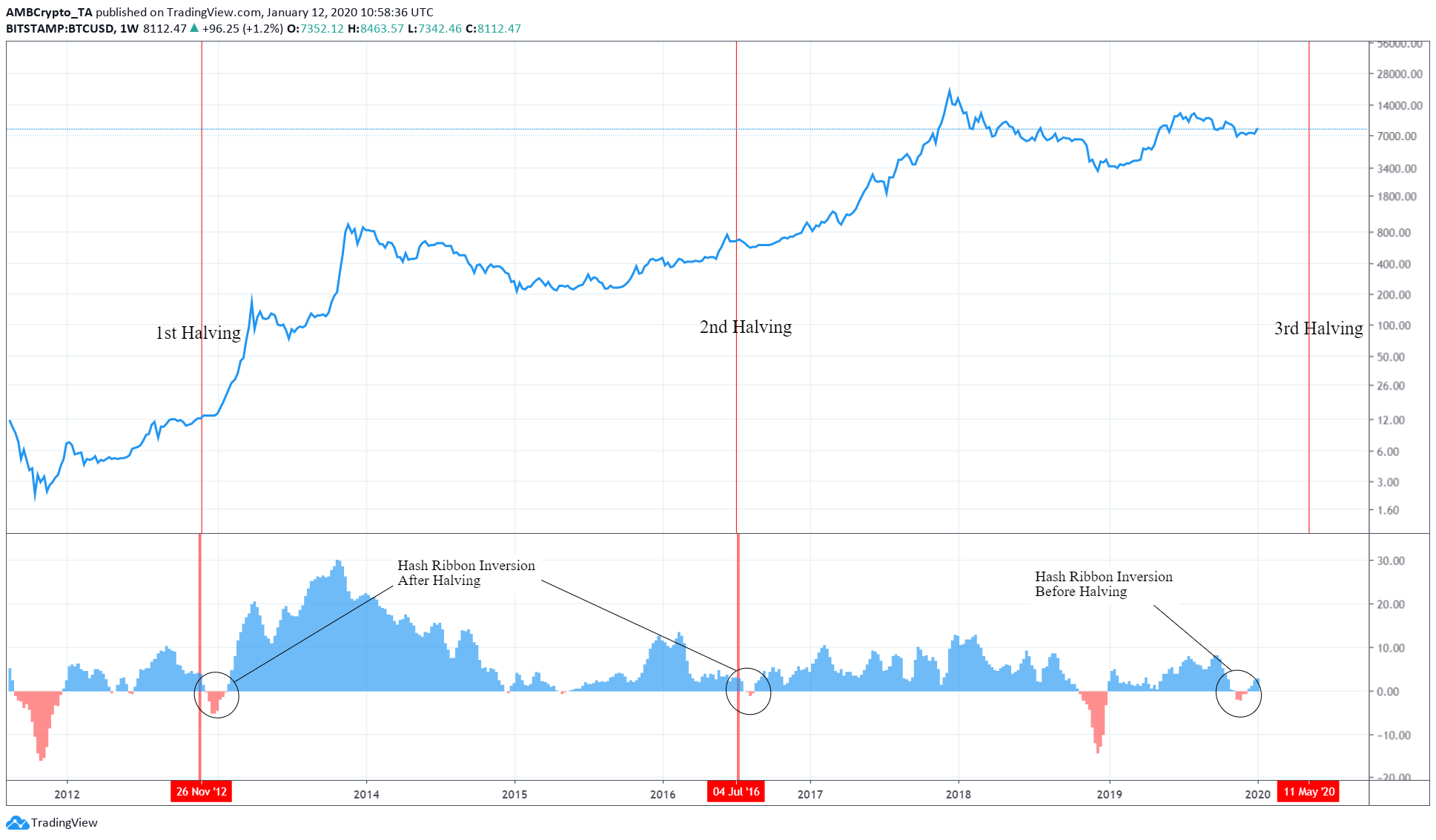 As of now, the miners [western miners the U.S. and the European miners] are supposedly breaking even and not profiting. This could be due to the rising tensions between the U.S. and China. Moreover, the Chinese government has removed Bitcoin mining from the phased out industry, giving a ‘go signal’ for miners in China. The confluence of the Chinese government’s stance of mining and the mining concentration in China gives the Asian miners an edge due to cheap electricity costs. The rumor is that the Chinese miners are allegedly trying to force the western miners out since they remain profitable even if Bitcoin falls to $4,000 levels.

In addition, the hash ribbons indicator [seen in the above chart] has inverted towards the negative side [blue to red] further confirming the above-mentioned scenario of western miners’ unprofitability. The inversion has historically occurred only after the halving leading to a decrease in price shortly thereafter.

The first halving [November 28, 2012] was approximately 2 years after the launch of Bitcoin. It was a time when Bitcoin had not gained traction, both, in terms of popularity and adoption. The second halving [July 09, 2016] took place after a euphoric bull run that pushed BTC close to $1,000.

However, the third and the upcoming halving is quite different from the rest; partly due to the widespread popularity of Bitcoin after the 2017 bull run, and mainly due to regulatory clamping and the involvement of institutional investors. Since the second halving, myriads of products have been introduced into the Bitcoin market, Derivatives, Futures, Options, etc. The growth of this ecosystem does not originate from unregulated players, but also from players like CME and Bakkt. Hence, not only can this evolution break the preconceptions about halving but it can also be a stress-test for the pre-existing models that are used for BTC.

Meltem Demirrors spoke about the above in the Unchained podcast as she outlined how the Bitcoin market today is “much bigger” than it was. She added how investors could only really go “fundamentally long” with their investments. 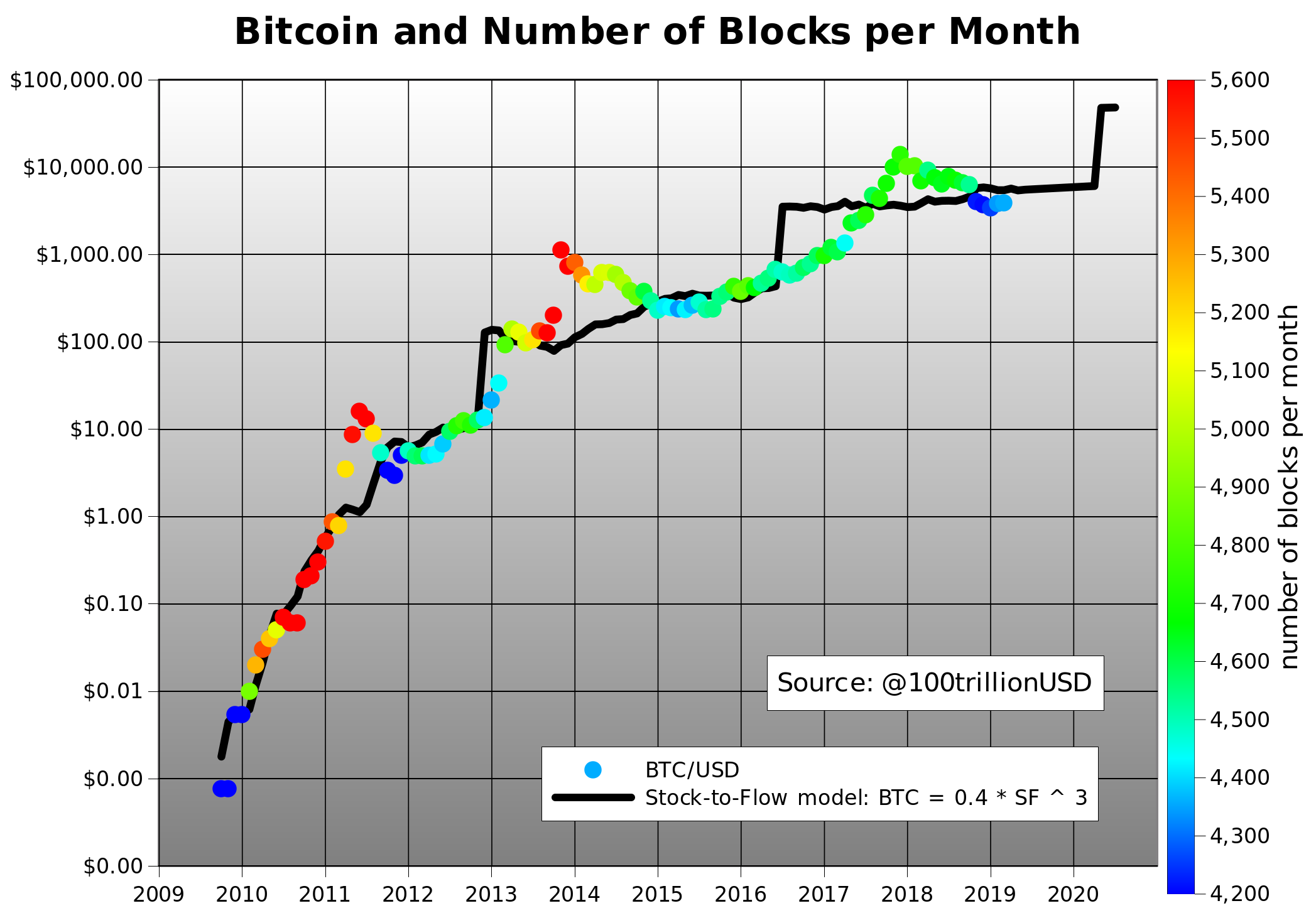 PlanB aka 100trillionUSD is a well-known member of the Bitcoin community for S2F models. Stock-to-Flow models developed by PlanB uses S2F of gold and silver to retroactively predict price movements for bitcoin. PlanB’s model puts the price of Bitcoin above $50,000 after the halving; before the halving, the price remains under $10,000. Models created, generally, take into considerations past data to predict how an asset might react in the future; in that sense, Bitcoin’s S2F model, although resembles gold and silver’s, there is a chance it might not hold true in the upcoming halving. Particularly, since the narrative is changing rapidly.

Ever-increasing hash rate and difficulty, declining price and the changing narrative, all point towards one thing, a different outcome for this halving. Perhaps, the April 2018 rally was Bitcoin being priced-in for halving. The evolution of the Bitcoin ecosystem and the option for people to go both ways, long and short, may change how halving effect.

Bitcoin likely to see a sharp decline to $7,800