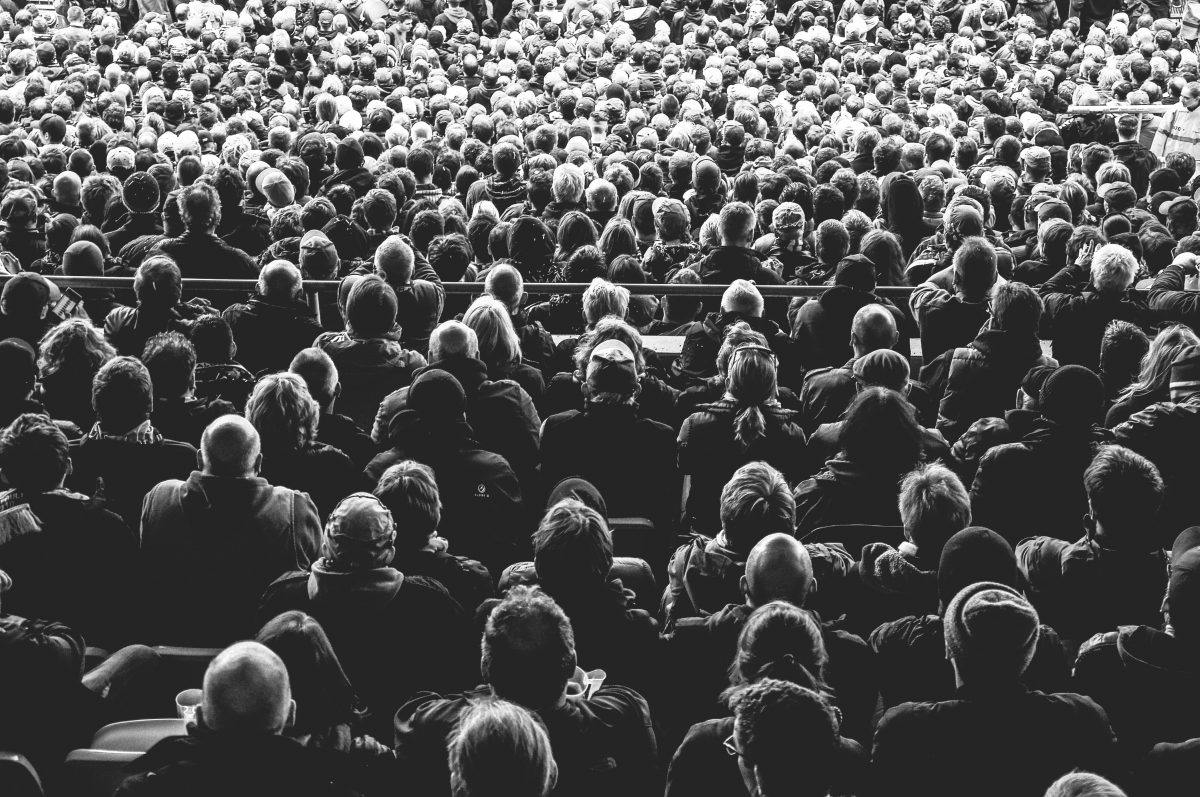 Everyone has an elusive target, one which they know they can never immediately reach, but one which dangles in front of them like a carrot teasing them along mile after mile. For Bitcoin, that target, according to most, is measured in dollars, to be exact – $20,000. Why $20,000 Because that’s the price the cryptocurrency [almost] reached back in 2017 during its first and only retail rush.

A lot happened in 2017 which fueled Bitcoin’s run to five-figures and further. China began to clamp down on the big-three exchanges, the Winklevoss twins’ Bitcoin exchange-traded fund [ETF] was snubbed, and the two big Chicago derivatives exchanges launched Bitcoin Futures.

All this and more shed limelight on Bitcoin and saw it become more than just “magic Internet money.”  During this run, in addition to the puritan crypto-folk comprising of technology anarchists, open-source developers, free-market libertarians, and institutional investors and hedge fund managers, another group took the plunge into Bitcoin – everyday people.

Now, an eerily similar feeling has cropped up in the market. With world markets in flux, the pandemic stopping consumption and supply cycles, and traditional assets falling fast, the deflationary decentralized currency is coming to the fore in price and popularity.

It’s not just in the price, but also in every other notable metric, that Bitcoin “mooned” in late-2017. As Bitcoin surged and surged, the number of transfers to exchanges, Chinese and otherwise, kept growing. Cryptocurrency exchanges to which retail investors flocked into in the hope of getting in on the price action saw a total of over 190,000 in exchange transfers at the end of 2017, leading up into 2018. However, from there, it all went, quite literally, downhill. 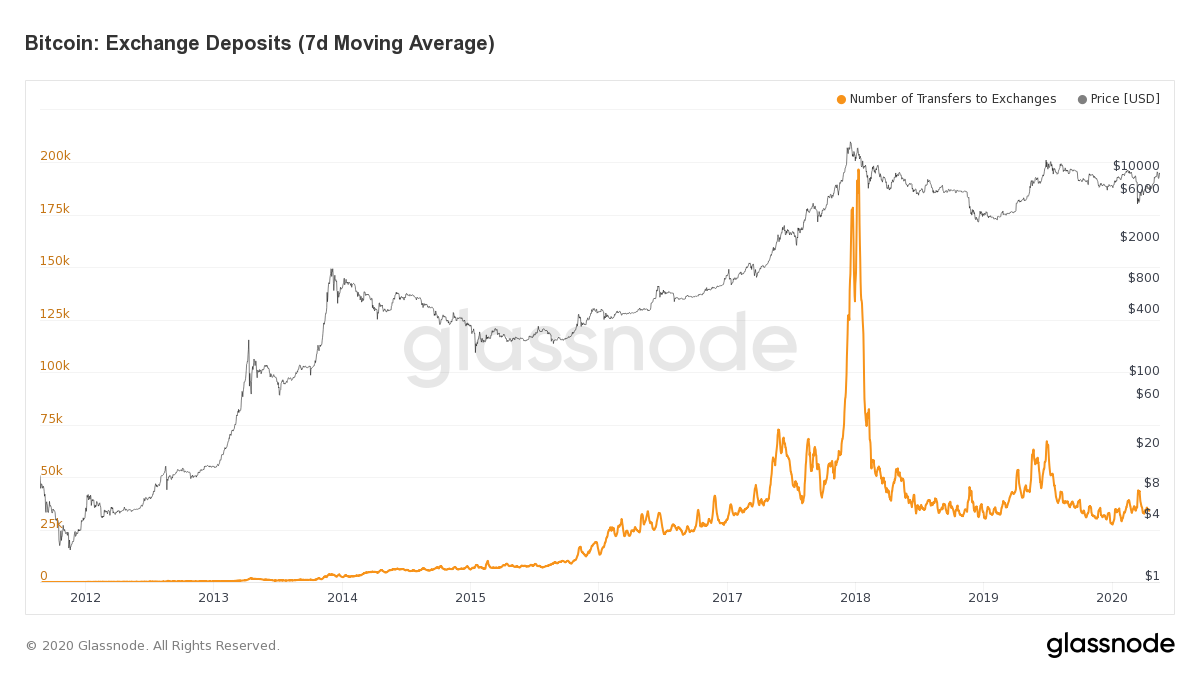 With retail investors beginning to purchase more and more Bitcoin, more addresses to store the same began popping up. On 19 December, the day the cryptocurrency came the closest to $20,000, the number of new addresses created reach its ATH of over 661,000. In the month since Bitcoin’s high, these addresses began filling up, with the number of non-zero addresses reaching a high of over 28 million, which was only surpassed in December 2019. 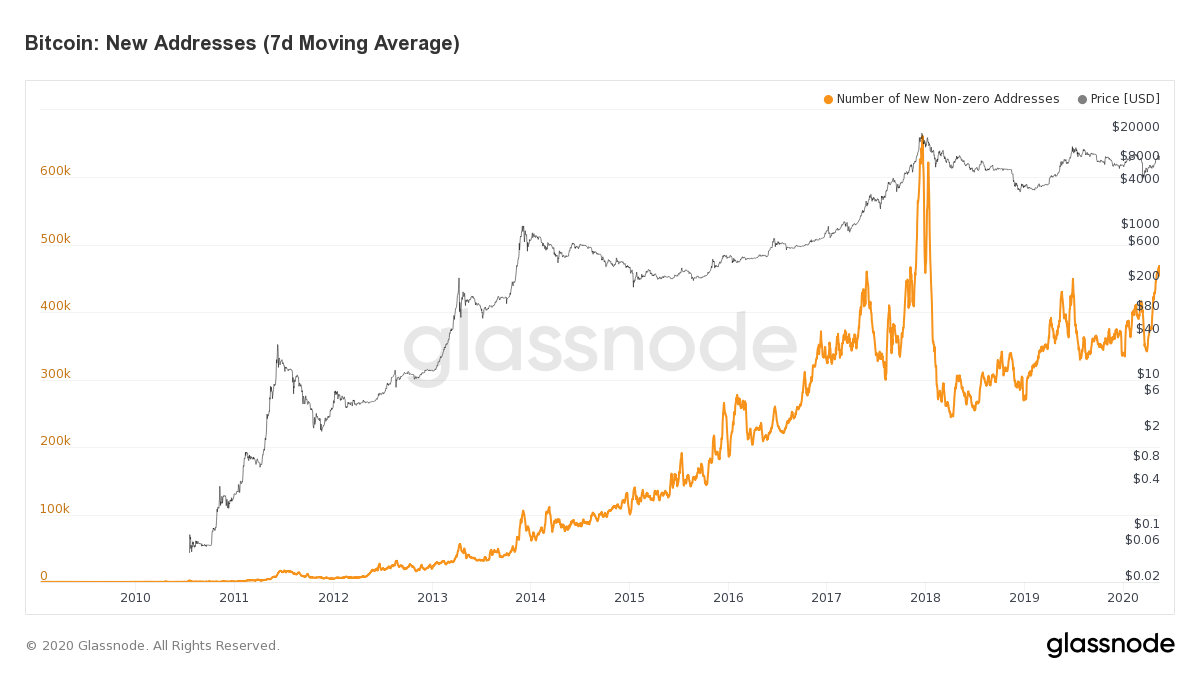 Transactions weren’t left out either. Exchanges welcoming retail traffic and addresses being minted out by the minute, the number of transactions per second surged to as high as 4.71 transactions per second, a feat which has since not been surpassed. Every single metric, on the market side of the decentralized currency, was “mooning,” in addition to the price. Given the micro-level movement of every metric, it was clear that regardless of what made the price move, whale or momentum, it was kept going by the average Joe. 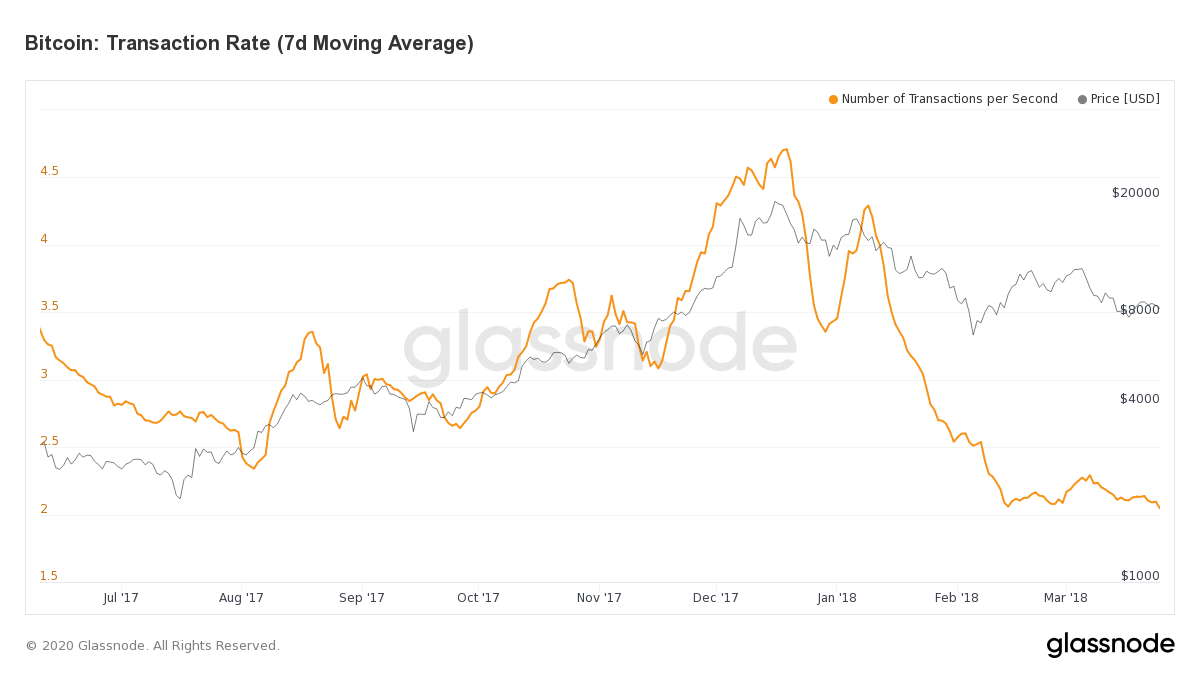 What followed, however, was dissipation. As the price ceded, so did the populace. It’s no wonder that the charts above have a peak and then a plummet as once Bitcoin’s bubble was popped, transactions plummeted, addresses dropped, and exchange deposits minimized. This move continued throughout the year and Bitcoin, which began the year in five digits, ended it at $3,000.

The year after the crypto-winter saw the price climb back up without retail and with plenty of institutions. A survey by Fidelity Investments [which began Fidelity Digital assets in late 2018] of 411 institutional investors conducted between November 2019 and February 2019 [when Bitcoin bounced between $3,000 to $4,300] revealed that 72 percent of them preferred to buy digital asset-based investments, while a majority opted for direct purchase.

The brokerage giant TD Ameritrade’s CEO Tim Hockey stated in mid-2019 that their clients’ interest in trading Bitcoin was surging. “Clients are asking for it,” he said, gauging the growing sentiment from the deep-pocketed investors. It’s important to note here that TD Ameritrade owns a stake in the digital assets trading platform, ErisX.

As this was brewing, two Bitcoin ETF proposals were pushed and pushed until they were rejected, but not before the SEC acknowledged key parts of their proposals. Bitwise Asset Management, the firm behind one of those proposals, stated in light of the rejection,

CME’s Bitcoin Futures volume was picking up trading over 6,000 contracts [each representing 5 BTC per day], Bakkt began offering physically delivered Bitcoin Futures [but didn’t hit the ground running, to put it mildly] and institutional investors suddenly had a plethora of crypto on-ramps. However, retail was still nowhere to be found.

With institutions setting the pace for the cryptocurrency market, both in terms of price and volume in 2019, much of the same looked to continue into 2020. The year started out with Bitcoin moving alongside gold, but as the markets came to a standstill because of the COVID-19 pandemic, the narrative flipped.

Bitcoin, from being the lure of institutions, became the scapegoat. As markets plummeted throughout the world and central banks armed monetary and fiscal policies to support the economy, a sell-off ensued. This sell-off was less to ward off investments and more to hold cash for liquidity. With global equity markets dropping to record lows and gold not holding its ‘safe-haven’ claim, Bitcoin was sure to be next.

Soon enough, reality caught up. On 12 March, in the wake of a massive liquidation spree, Bitcoin lost close to 50 percent of its value in less than 12 hours, with the trigger coming from institutions and their automated trading. Popular exchanges for these high net worth investors, like the CME in the US and BitMEX for Asian traders, saw sell-offs. The Open Interest for CME and BitMEX dropped, within the Bitcoin plummet window, by $100 million and $500 million, respectively. 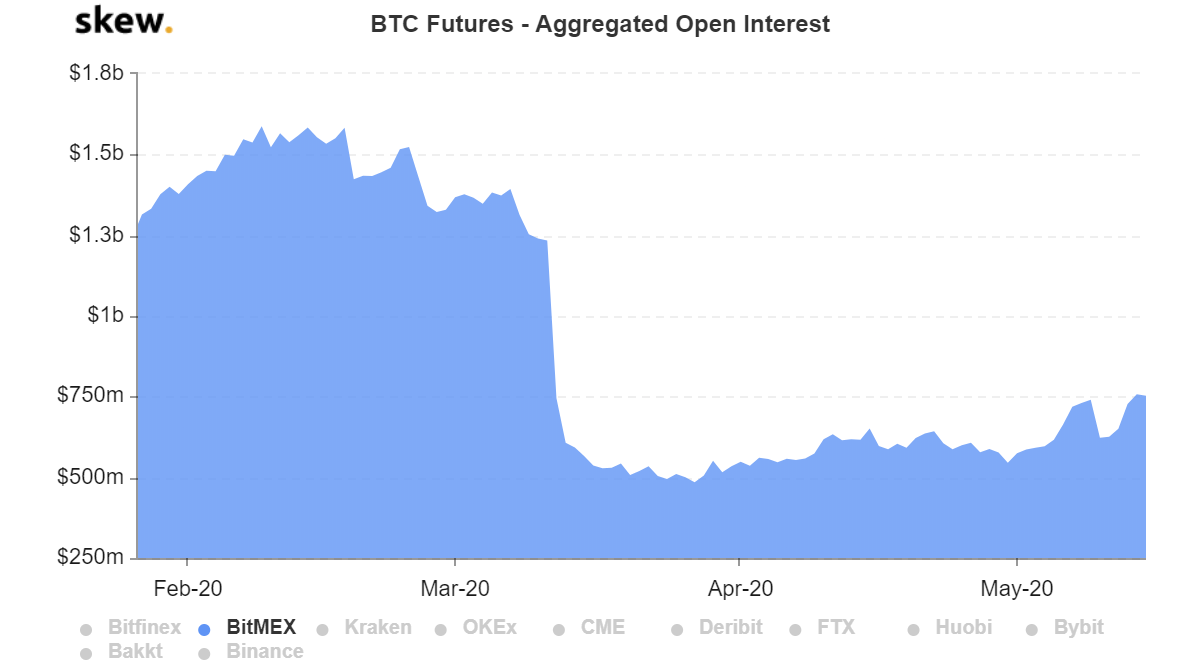 According to the on-chain analytics firm Glassnode, the total number of “active entities” on the Bitcoin network in May 2020 reached its highest point since the 2017 bull run. This run-up from around 220,000 entities to over 300,000 in less than a month gave emphasis to a retail rush. It should also be noted here that “entities,” according to Glassnode, is different from “users” or individuals.” An entity does not refer to a single address holding funds of multiple users, and hence, an individual’s address is measured the same as multiple exchange addresses. 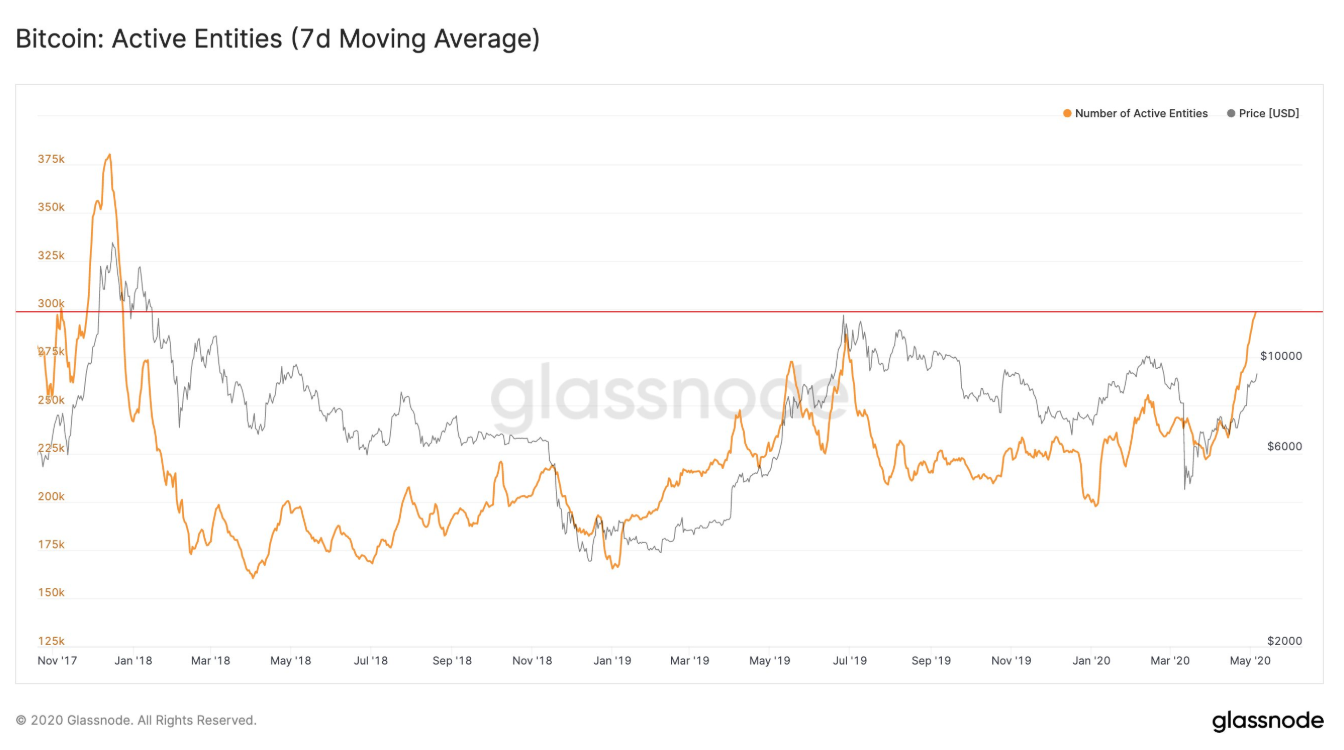 Going back to the derivatives side of the market, there was yet another reshuffle with a retail significance. As BitMEX, the top-dog institutional exchange, fell out of favor owing to “circuit breaker” allegations, Binance stole the lead. Following the plummet, Binance’s share of total Bitcoin Futures Open Interest rose, while BitMEX’s fell as the former saw considerably higher daily trading volumes. 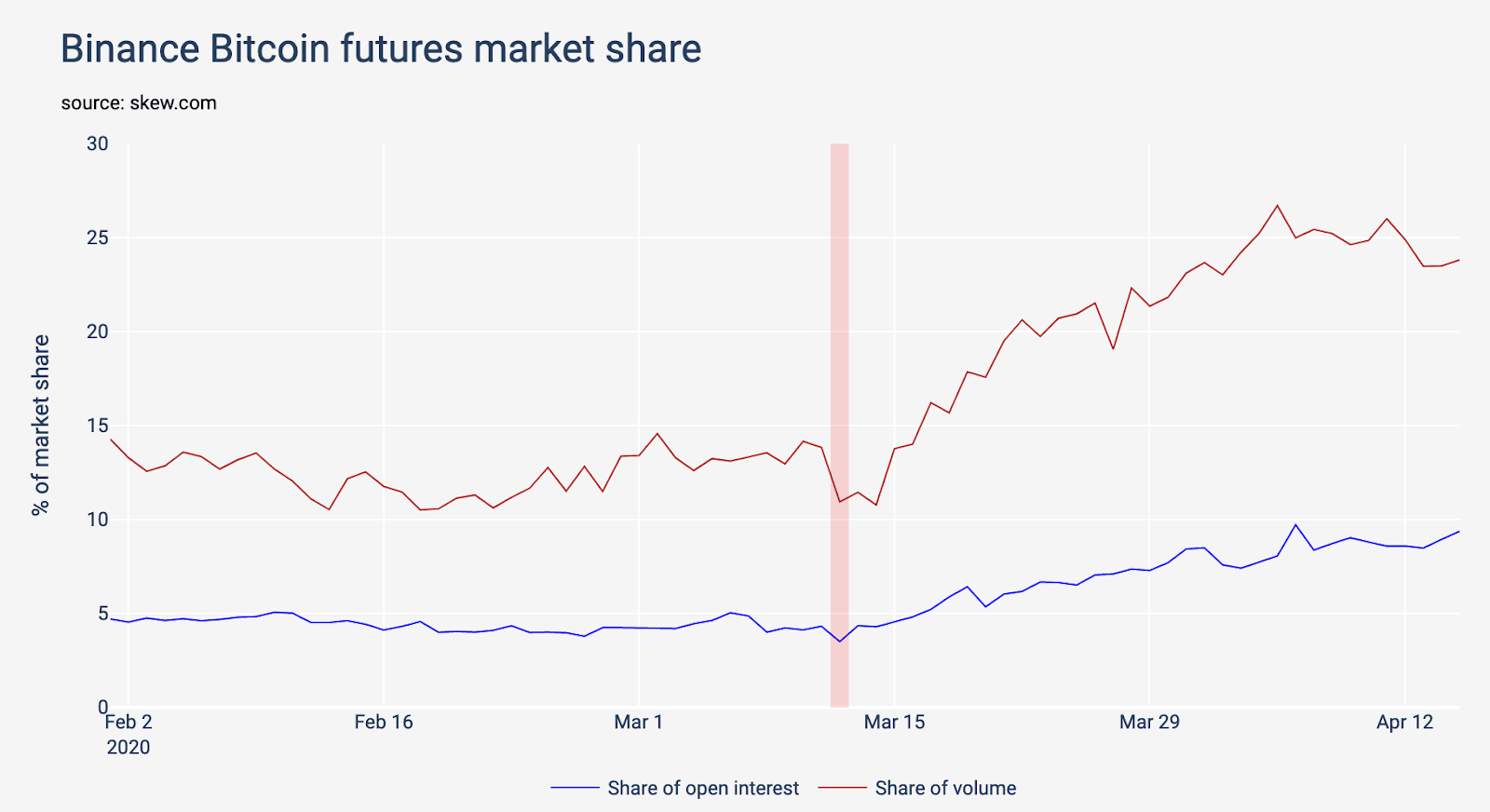 During the time, Binance’s turnover rate i.e. its daily volume to Open Interest was as high as 7.31, while that of its competitors, BitMEX, Huobi, and OKEx was in the 2-3 range. Adam Blumberg, the founder of Interaxis, told AMBCrypto that a reason for Binance’s overtake post-March 12 and its high turnover was because of the exchange’s retail focus. He said,

“Of these [exchanges], Binance is one of the most retail… Binance has never built itself as an exchange that is used by more institutional traders.”

Another beneficiary of the BitMEX fallout was OKEx, which jumped to take the highest OI share in the BTC Futures market. Lennix Lai, Director of Financial Markets at OKEx, told AMBCrypto that retail participants on both the spot and the derivatives front have increased. While the latter is still dominated by “professional traders,” given its complexities, the spot side of Bitcoin will see a rise as investors of traditional assets. He added,

“I think the recent resilience of bitcoin price -comparing with stock and gold market – do arise massive interests from traditional finance.”

Both the spot and the Futures market point to an imminent retail rush, if one is not already here. Looking ahead with an economic recession on the horizon and a deflationary shift in Bitcoin’s supply, a balancing act is in the offing.

Now that the halving is done and dusted, Bitcoin has a clear road, one which will be marred by price discovery. As miners look to balance their profits with a fall in their rewards, the market has to realign its incentives to ensure mining continues. With the amount of retail interest now within the market, will this class of more distributed investors push the price up?

In 2017, the thick of the retail crowd only jumped onto the Bitcoin ship when the price soared to five-digits. Given that Bitcoin’s ATH is around $19,500, Jose Llisterri, the co-founder of Interdax, believes that only when this mark is broken will retail investors come back. Till then, however, the market is “speculation-driven.”

Speaking to AMBCrypto, Llisterri said that while retail investors aren’t rushing, institutions who have less to lose will grow.

“The involvement of institutional investors is likely to continue to grow slowly but steadily. They could become more optimistic on the crypto market in the months ahead, as the responses of central banks to the Covid-19 pandemic is the perfect opportunity for bitcoin to establish itself.”

On the other hand, investment is not the only attraction of Bitcoin in these troubled times. Given its rising value vis-à-vis the dollar and other dropping fiat currencies, its use as a payment system also comes into play now. Steven Becker, COO of the Maker Foundation, stated that the pandemic has changed Bitcoin’s representation in the eyes of retail years. He told AMBCrypto,

“The autonomy over transfers of value that are transparent, easily accessible and quick resonates with people sheltering-in-place, so I expect the rate of adoption to increase.”

Retail investors are fickle, they only get in on the act when, as Llisterri pointed out, an ATH is reached, or as Becker stated, when their own payment method fails.

Another reason why the average guy will venture into Bitcoin is – F.O.M.O. While the halving may not be marked in everyone’s calendars, the FOMO will certainly hit, according to Ryan Scribner, the creator of Investingsimple.com.  A traditional assets investor, Scribner ventured into Bitcoin this year keeping the halving in mind and ‘expecting there to be price movement.’

Comparing this rise with the previous retail rush, he stated that in 2017, the timing of the move played a big part. The Thanksgiving and Christmas dinner conversations about Bitcoin caused a word-of-mouth rally resulting in a price move, in his opinion. The airing of the Big Bang Theory episode on Bitcoin 30 November also added fuel to the fire.

Bitcoin’s 2017 retail rush was contributed to by derivatives, FOMO, and possibly even Sheldon Cooper, but overall it had a feeling of ingrained oneness with the average person.

As surrounding markets are falling, propped up only by central banks’ artificial stimulus, Bitcoin is not only decreasing in supply, but increasing in price. This scarcity by the minute of the cryptocurrency is rekindling a cautionary interest in it, and if acted upon, it could result in yet another retail rush in Bitcoin.

BestChange, platform in service of cryptocurrency users for 13 years continues to lead the industry