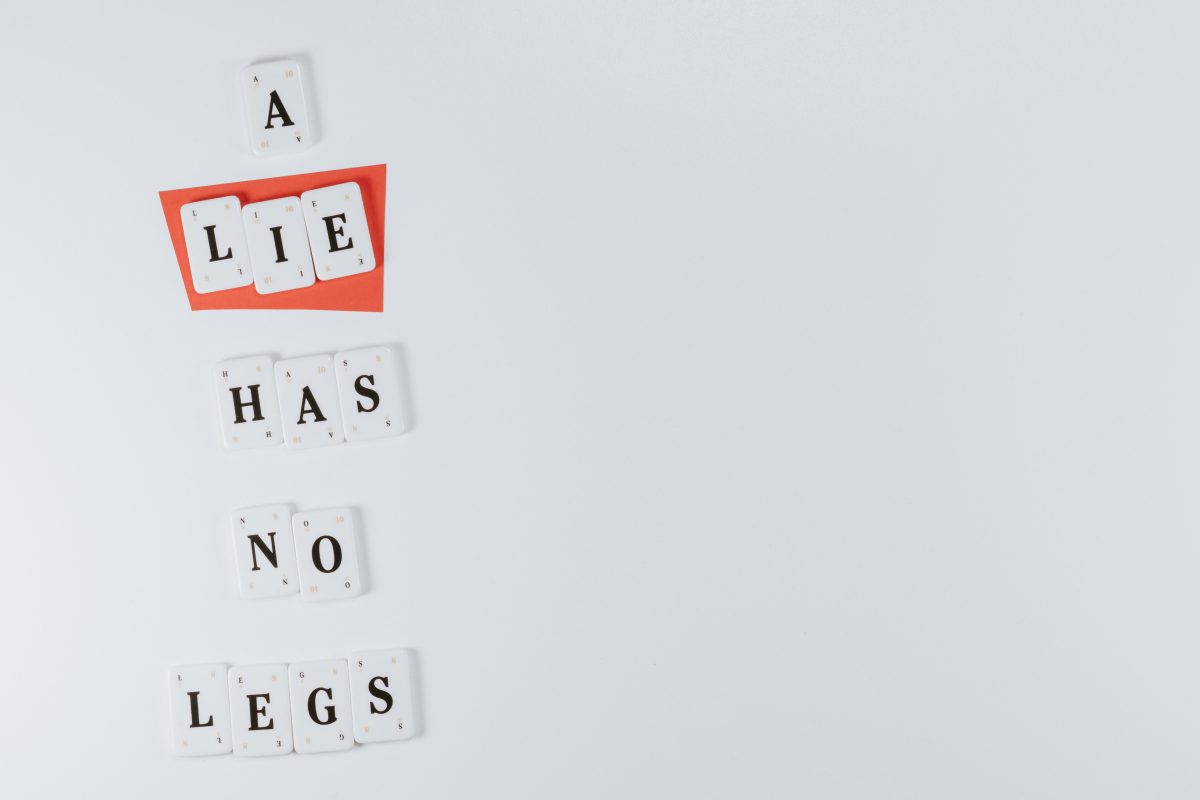 Still not seen as a legitimate asset class toe-to-toe with traditional assets, Bitcoin is still shrouded in a cloak of manipulation and uncertainty. In these obscure times, an essential for any market to achieve relevance is structure and uniformity. Effective tools to bring about the removal of information asymmetry, like market performance metrics, never go amiss.

One of the markets within the larger decentralized currency paradigm gaining traction over the past few years is cryptocurrency-derivatives. Billions of dollars worth Bitcoin Futures are traded every day within reputable exchanges like the Chicago Mercantile Exchange [CME] and the Intercontinental Exchange [ICE] through its digital assets platform, Bakkt. At a time when Futures, concentrated to only a few top cryptocurrencies, are notching trading volumes significantly higher than their spot counterparts, how does one measure performance?

For a traditional Futures exchange, typical performance measures include trading volume, the number of positions opened, and the spread between trades made. Each metric paints a different story; while some reveal the amount of money flowing in and out of the exchange, others quantify the outstanding positions active on the exchange, while others still show whether all of this is organic or faked.

In a market where volumes change by the billion each day, prices fall by a tenth every week, and the leverage on contracts are as high as x125, a relevant understanding of exchange performance would not go amiss. It would allow traders within different pocket depths i.e. retail or institutional, or trade sizes, i.e. large and small offerings, or risk appetites i.e. averse or takers, from making more relevant trade decisions.

One of the main reasons for nuance within a highly convoluted market such as Bitcoin Futures is because of the divergence of one exchange leading the way, even if it’s only off-late.

Prior to the great Bitcoin sell-off or the events of ‘Black Thursday,’ a time when the cryptocurrency lost almost half its value, the charts pointed to one clear front-runner in the derivatives market. BitMEX, the Seychelles-based exchange, sporting the first x100 leverage on Bitcoin Futures and spearheaded by Arthur Hayes, led the market on almost all performance fronts.

For instance, in the month of February, the total open and active positions traded on BitMEX was worth $43.29 billion, worth over a third of the total Open Interest across the top-8 Bitcoin Futures exchanges. On average, BitMEX recorded a daily Open Interest of $1.49 billion. 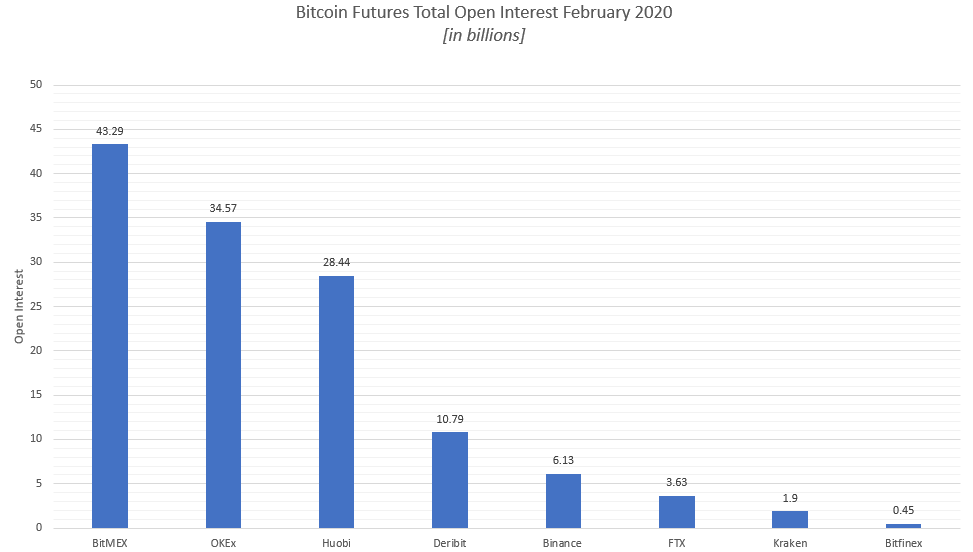 In terms of liquidity, BitMEX was the most liquid exchange, owing to its B/O spread across contracts tightening, despite Bitcoin’s volatility. Since January, BitMEX’s spread was the lowest in the market at an average of 0.59 percent for $10 million daily average contracts traded. The closest exchange, in terms of liquidity, was Binance, with a difference of over 50 basis points, while other exchanges’ skews were as high as 5 percent.

Liquidity for contracts with a smaller daily average in trades saw the same result, with BitMEX in front and Binance taking second.

However, in terms of volume, BitMEX did not have an out-and-out lead. In February, OKEx took the top spot for monthly volume, amassing $94.02 billion in trades to BitMEX’s $90.7 billion. The two exchanges accounted for over half of all trading volume for the top-10 derivative exchanges.

In March, the great re-shuffle took place. Following Bitcoin’s worst single-day price movement in seven years, the derivatives market [across the top 10 exchanges] initially saw a surge in volume, trading Futures contracts worth $43.38 billion on the eve of the crash on 12 March and $41.13 billion a day later. To put that in perspective, the average daily volume for February was $12.72 billion.

Given the shock-and-awe nature of the crash, BitMEX, which, understandably saw an enormous amount of traffic, choked. The exchange, in one hour alone, saw over $800 million in liquidated longs, which resulted, as some the in the market called it, the alleged use of a ‘circuit breakers.’ However, a week later, BitMEX CTO Samuel Reed clarified that the initially stated ‘maintenance issue’ was the result of a “botnet attack.”

Regardless of the origin of the trading intervention, BitMEX lost its position as the front-runner in the derivatives market. In the next few weeks, Binance moved from the fourth spot to first, overtaking Huobi and OKEx in the process and becoming the exchange with the largest volume across all platforms.

Even on the Open Interest front, BitMEX was downed. According to a report by Arcane Research, for the week ending 2 April, BitMEX recorded the largest drop in Open Interest on a week-on-week basis. While OKEx, FTX, and Binance increased their share of the total OI by 4.94 percent, 4.11 percent, and 2.48 percent, respectively, BitMEX lost 5.8 percent. The reason for this, the report stated,

“BitMEX has struggled to hold its position in the futures market following the long squeeze and liquidation loop of March 12th.”

What this meant was that by the time Bitcoin, both in terms of its spot price and derivatives, normalized, the three performance metrics for the latter pointed to three market leaders. BitMEX, having recovered its larger 4 percent spread, led on the liquidity front, with Binance accounting for the most Futures volume and OKEx holding the most active trades.

As things stand, not only are the performance metrics visibly skewed, it also faces constraints. The big picture view of derivatives exchanges offers a three-dimensional view of Bitcoin Futures in terms of daily trading, the spread between the trades, and the dollar value trades open on an exchange. However, other key metrics are often left out.

For instance, the turnover ratio of Bitcoin Futures reveals the “level of hedging and speculative activity for a contract relative to existing positions,” told Interdax Co-founder Jose Llisterri to AMBCrypto.

The turnover data in the derivatives market revealed that in February, Binance’s volume to OI ratio was over x2 that of BitMEX, OKEx, and Huobi, indicating the trio sported less speculative activity than Binance which overtook them a month earlier. Given below are the ratios, 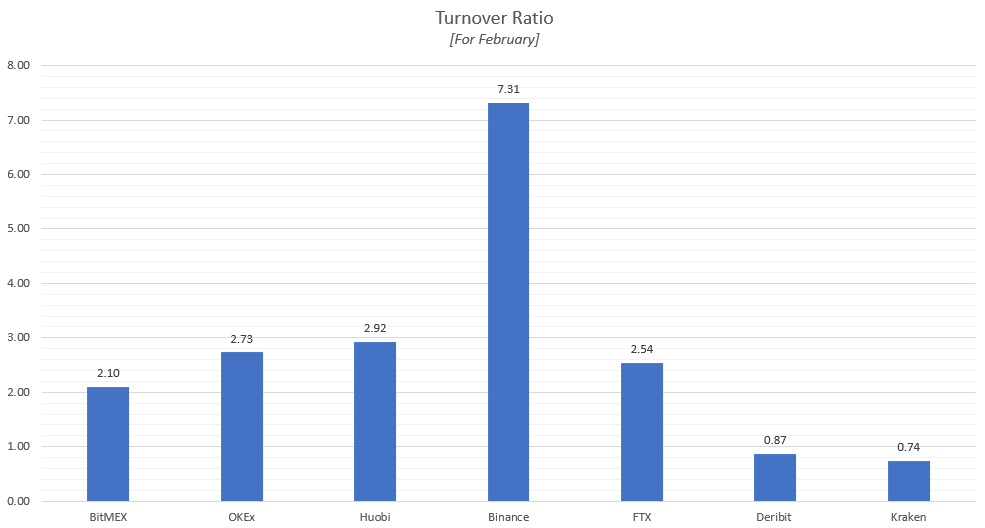 Given the rapidly changing price of the underlying asset, massive leverage and increased trading liquidations mechanism also need to be equated, especially for the derivatives market. In this regard, Llisterri added,

“Traders should look for exchanges that have a robust index that draws prices from different spot exchanges to ensure that sudden price movements do not cause unnecessary liquidations and to avoid price crashes.”

For derivatives exchanges, this is all the more important as their BTC Futures’ price is retrieved from spot exchanges. BitMEX’s perpetual Bitcoin Futures contract equivalent to 1BTC bases its price on the .BXBT Index, which is broken down by 6 exchanges, 3 of which account for 90 percent of the price [Coinbase, Bitstamp, and Kraken].

Llisterri added that with more spot exchange in the index price calculations, the “easier [it is] to identify and remove outliers, reducing the impact of any manipulation in other markets.” A clear ‘demonstration’ of the same, he stated, was ‘Black Thursday.’

But perhaps, the most relevant metric in the market, one that demarcates trading with its organic nature, is liquidity. It is useful that the two top crypto-analytics companies, CoinMarketCap and CoinGecko, have included liquidity in their updated exchange performance-trackers. Gerald Chee, Head of Strategy at CoinMarketCap, told AMBCrypto back in December,

“At the end of the day, we firmly believe that liquidity is the single most important variable for any financial market, crypto or otherwise. The job is to get everyone to understand this, not just the sophisticated traders and investors.”

Not just for analytics, exchanges need to look out for liquidity, “otherwise pricing will be heavily penalized and as a result, there will be no market,” said Eric Benz, CEO of crypto-exchange Changelly. Differentiating between spot Bitcoin and its contractual equivalent, Banz stated that the only use of Futures is to “hedge a particular position in BTC.”

Regardless of your purpose for using cryptocurrency derivatives, a robust reporting and performance tracking platform wouldn’t go amiss. Further, it would help traders clear the clutter of which exchange is not only the most used in terms of trading, but tightly packed with traders, solvent, used for calculative trades, not just speculation, and tracks the correct underlying price of Bitcoin.

Looking ahead, speculation in the market is only likely to increase, with the halving and institutions poised to pump dollars into a relatively stable crypto-market. Exchanges are likely to dive deeper into derivatives offering more leverage to satisfy the growing risk appetite.

In this time, performance tracking, beyond volume, Open Interest and liquidity, is not just required, it is essential. Benz concluded by commenting,

‘With BTC Futures many volatile risk parameters are missing or not even known where as a traditional derivative is usually filled up with many well known metrics that help you price it right and make the right decision for the specific risk [you] are managing.’

Ethereum might face inevitable drop to $187, with low re-test probability at $170

Tether’s market influence is the right mix of dominance, ungovernability