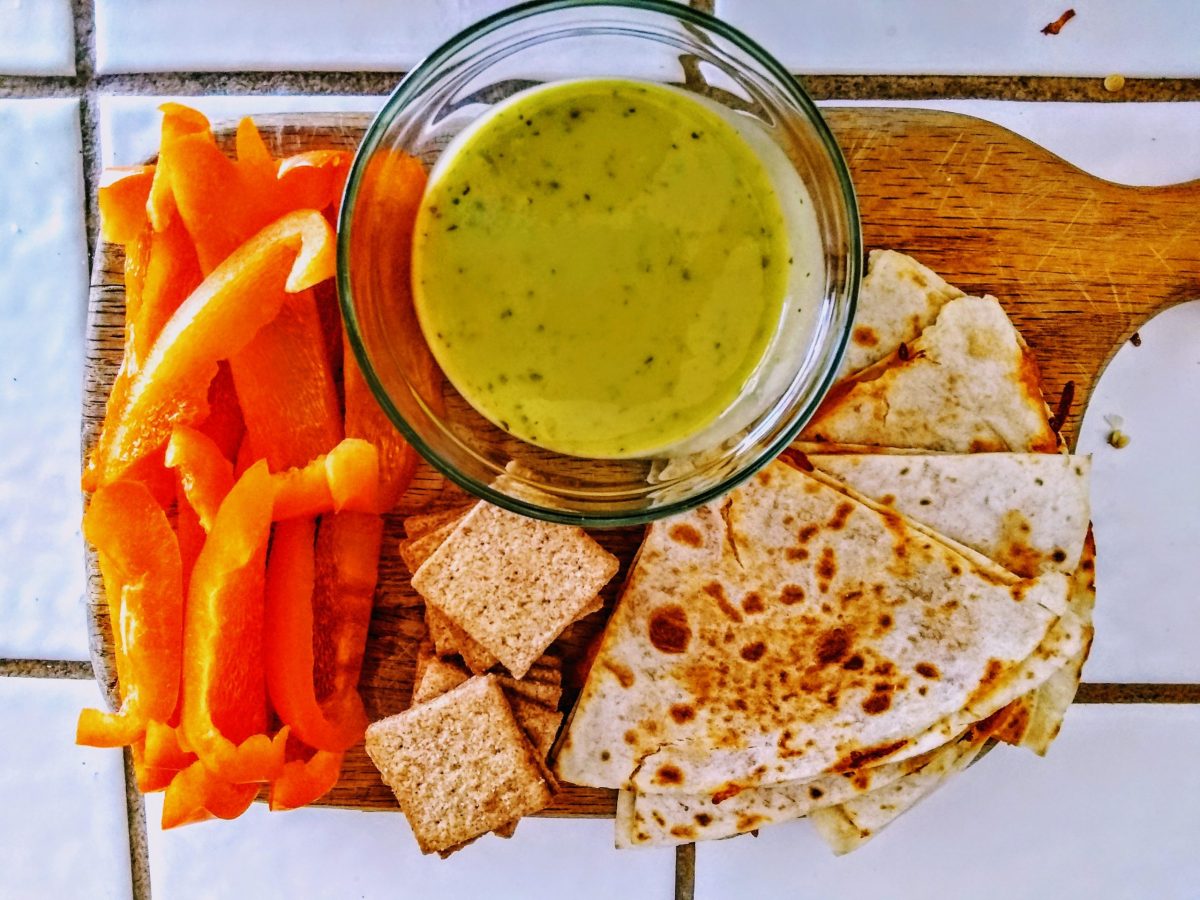 Let’s face it, no one wants to buy Bitcoin. Let me explain.

What I mean is, no one wants to buy Bitcoin at its current price, whatever its price may be. We always tell ourselves, “maybe tomorrow it will have fallen some more, and then I’ll buy it.” And oftentimes, tomorrow doesn’t come.

However, some of us are more calculated. Some of us have a set number attached to that “some more,” and keep telling ourselves that if Bitcoin falls by that certain amount the next day, we’ll buy it!

And, we often check CoinMarketCap and CoinGecko each day to see if the price of Bitcoin has fallen by that amount and then and only then, will we hop onto our exchange and buy it. Admit it, we all do it! At least those of us who don’t dollar-cost average.

Okay, so now that our dirty secret is out, how do things look? Well, let’s look at the numbers across a set of risk profiles.

This is how the broader picture stands, and below I’ve broken it down by the following price declines – over 10 percent, over 5 percent, over 3 percent and over 1 percent. So, how much should Bitcoin dip for you to buy the dip? And which strategy would’ve made you the biggest profit from the beginning of the year till now? 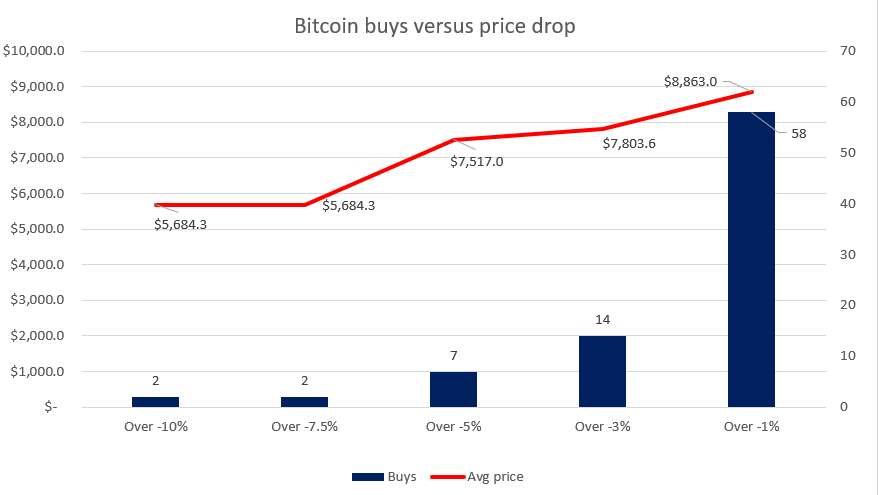 Say, you’re a conservative investor who has a huge amount of capital and can buy one or two Bitcoins all at once, but you only ‘buy low,’ and in this case, low is a drop of 10 percent or more against the previous day’s price. For you, a big, bold “-10%” against Bitcoin’s price and a bleeding market is an opportunity to fill your bags, rather than dump them.

Just 2, only on two days in the year has Bitcoin fallen by more than 10% against its previous day’s price  – on 12th March and 13th March, a consequence of Black Thursday. If you bought 1 entire Bitcoin on these days i.e. two Bitcoins in total, you’re average buying price would be $5,684, against the press time trading price of $10,700. That’s a profit of over $5,000 on each coin!

A caveat here –  If your risk profile would only allow you to buy Bitcoin if it dropped by more than 7.5 percent, you’d still make only these trades because Bitcoin on a day-to-day basis fell only twice in excess of 7.5 percent.

The Mr. Play the market

Say, you’re Mr. Play the market and you’ll only buy Bitcoin if it dips by more than 5 percent between two days, allowing you to make a few trades to profit, but not too much that you’d lose your mind. How many buys do you think you’d make? Despite people lampooning the BTC markets for excessive volatility, you would make only 7 trades, 7 trades in a total of 270 since the beginning of the year, that’s  2.7% of the year till now.

Just 7, only seven days in the year has Bitcoin fallen in excess of 5 percent against the previous day’s price – on five occasions between 8th March to 16th March, on 10th May before the halving, and earlier this month on 3 September. Your average purchase price? $7,510, against the current trading price of $10,700, that’s a profit of over $2,700 each time.

But, because you buy more times, your capital is lower, so instead of one entire Bitcoin, you buy half each time. That would put your final profit at $3,180, and if you buy 0.5 Bitcoin at each go, you would end up with a final profit of $11,140.

The Mr. I know what I’m doing

Say, you’re Mr. I know what I’m doing and target a quick turnaround, but invest a smaller amount each time. Your risk profile only allows you to buy Bitcoin if it drops below 3 percent on a day-to-day basis, how many Bitcoin buys would you make? Well, the answer is 14 trades.

These 14 trades obviously take into account the above buys on those dates throwing in a few more in the process – 26 February’s drop below $10,000, 28 March and 29 March as the price corrected from the March drop, 10 April, the two days prior to the halving, 20 May, and 4 September.

Your average purchase price is $7,800 from a total of 14 buys, which is $2,900 under the press time price. Following on from the previous theme, you’d buy a smaller fraction of Bitcoin, let’s say 0.25 BTC, which brings your final profit to $10,130 for the entire year.

Say, you’re Mr. Daredevil and you brave the market by making multiple trades, turning them around quite quickly as soon as Bitcoin drops. Your risk profile pushes you to buy Bitcoin each time it drops by over 1 percent on a day-to-day basis, how many Bitcoins do you think you’d buy? Do you think this sort of standard would keep you busy all year round, considering the market is so volatile?

Well, it would keep you busy, but not a lot. You’d end up making 58 trades, that’s 21% of the entire year spent buying Bitcoin, which lets be fair, isn’t a lot. This is how the buys are broken down per  month, 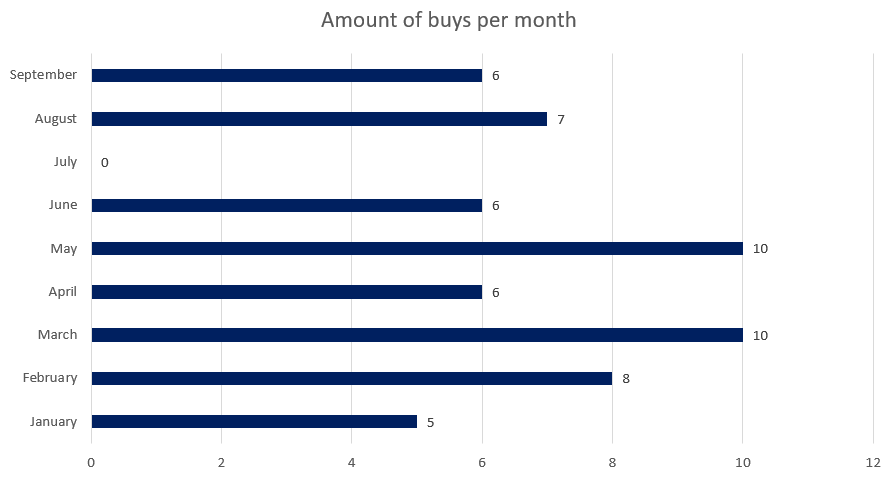 The profit you’d make would be quite slim, just $1,800 on the average purchase price of $8,800 for all 58 buys on the above dates. Because of the larger number of transactions, you’d end up buying a smaller amount of Bitcoin each time, say 0.1 BTC per order, putting your profit at $10,650 for the entire year. Which, again, is pretty handsome,

What path should you take?

That seems like a lot of data to take in, so I’ll break it down. For the year till date, based on the above risk profiles which differ in how often you’d buy Bitcoin and when you’d buy Bitcoin, the final profit is the highest for Bitcoin buys at a fall of -5%. This not only limits the number of transactions to just 7 [hence decreasing the order fees, time to buy and the headache that goes with it] but increases your profits by a over $500 against any of the other strategies.

Here’s a table summarizing the data,

Whatever strategy you’d like to take, there’s always a catch attached to it. Whether it’s the capital you can invest, the number of transactions you can engage in, the profit limit you have, or the amount of time you can glue your eyes onto the Bitcoin price charts, either way, if you buy the Bitcoin dip, you’re always always better off than if you didn’t.