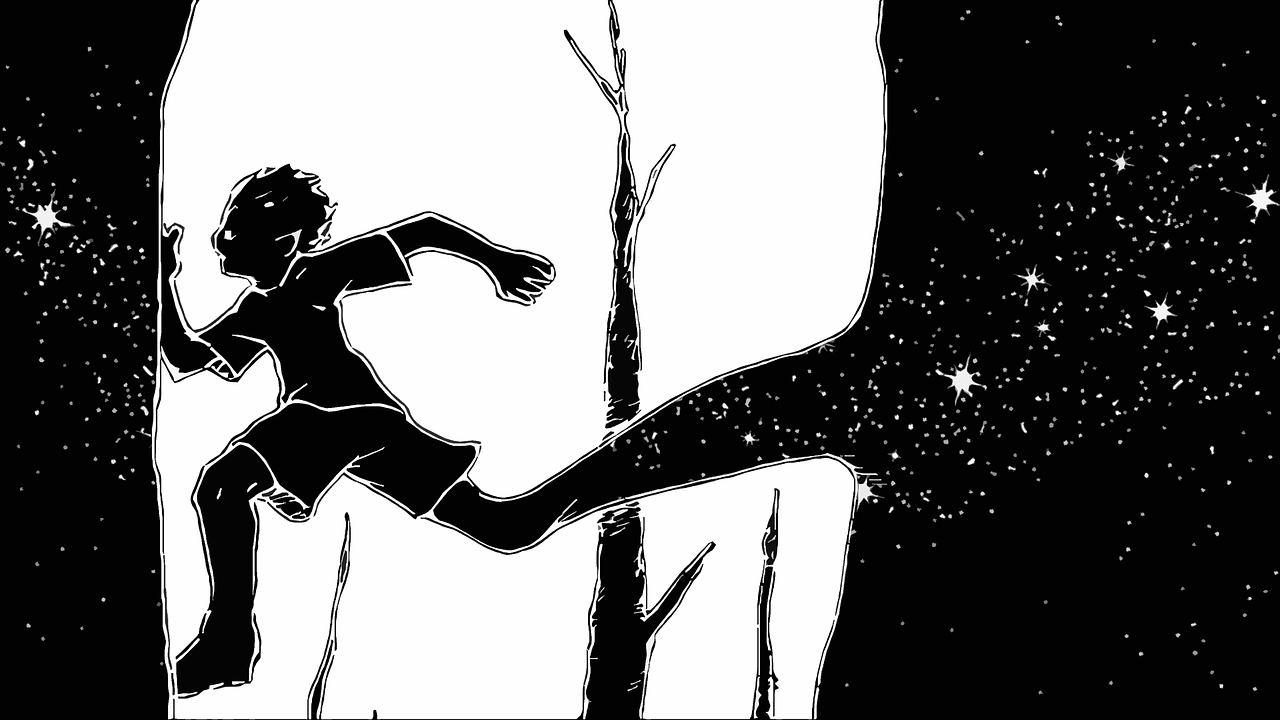 Random Question Alert: What is the one thing that is common between a Windows Phone, 2017’s Fyre Festival, and the last season of Game of Thrones?

Well, they all turned out to be damp squids. While highly anticipated before it was go time, when the curtains were finally lifted, one word was the verdict – Disappointing!

A similar sense of excitement in the cryptocurrency industry was generated by ICE‘s brainchild last year, when Bakkt’s launch was finally announced in March 2019. After the launch of Bakkt Warehouse, however, it was anything but breezy for the organization as after the first three months, the highly anticipated Bitcoin Futures product seemed destined to join the ranks of the aforementioned underachievers.

However, call it a stroke of luck or just good timing, Bakkt has been able to turn its fortune around and at the time of writing, remained well in the middle of one of the most volatile financial industries ever known to mankind.

Bakkt’s introduction was plagued by delays and 12 months of questioning, to begin with. The proposal for the launch began way back towards the start of 2018, a time when the digital asset market was in the spotlight for Bitcoin’s meteoric rise.

There was electricity in the air, with many expecting many institutional players to enter the digital asset sphere, with one such player supposed to be the Intercontinental Exchange backed-Bakkt.

Now, the likes of the Chicago Board Options Exchange (CBOE) and the Chicago Mercantile Exchange(CME) had already made their entry into the Futures market so, how was Bakkt planning to do the whole thing differently? Well, they had one ace up their sleeves.

Unlike CME’s Futures that were cash-settled, Bakkt was taking things up a notch by physically delivering the traded Bitcoins via Bakkt Futures. Even though Bitcoin had drastically changed market perception in 2019, Wall Street continued to take things lightly when it came to Bitcoin. However, Bakkt was looking forward to changing the entire game buy delivering Bitcoin to its investors.

Mati Greenspan, Founder of Quantum Economics, put it eloquently when he stated,

“Bakkt futures are clearly superior for the same reason that digital assets are better than traditional financial contracts, it’s the ability to take custody.”

On 23 September 2019, Bakkt Bitcoin Futures went live and the highly awaited commencement went exactly according to anything, but ICE’s ambitious plans. Bakkt registered a trading volume of only 71 Bitcoins on its 1st day. Comparison charts started spiraling around the space as CME Group’s launch in 2017 had noted the trading of 5298 Bitcoins.

And while Bakkt did receive the benefit of the doubt from many who cited the pressures that come with making a flashy debut, the sentiment did not really pick up for the next few months either.

Everyone was writing them off, but hats-off to Bakkt – it managed to weather the storm.

Now, Bakkt’s revival story is something like “being at the right time, but arriving 4 months too soon” narrative. It did not make sense at the beginning, but Bakkt‘s perseverance was following through into the new year.

As we all know, Bitcoin has noted a drastically volatile 2020, but it can be divided into two parts – Pre-March 13 (Black Thursday) and Post-March 13. Surprisingly, Bakkt relatively flourished across both periods. 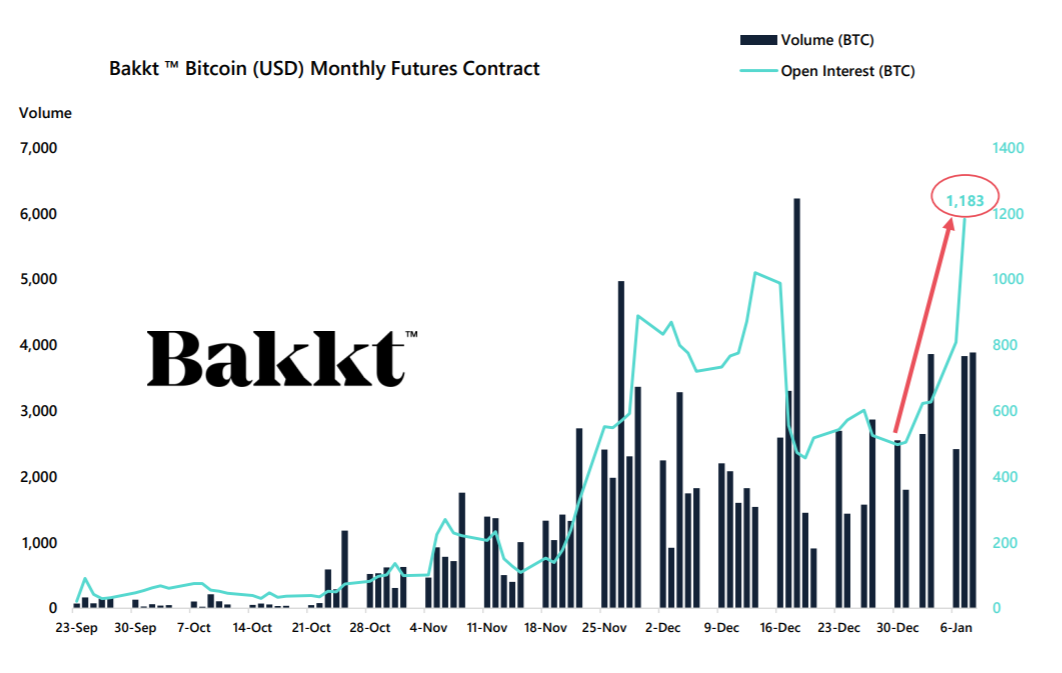 Bitcoin underwent a huge macro-pump in the first week of 2020 and the derivatives market was a major benefactor as a result. Bakkt’s Open Interest reached an all-time high of 1,183 Bitcoins for its Bitcoin Futures contracts and the trading volume improved by 25 percent, when compared to the previous week as well. 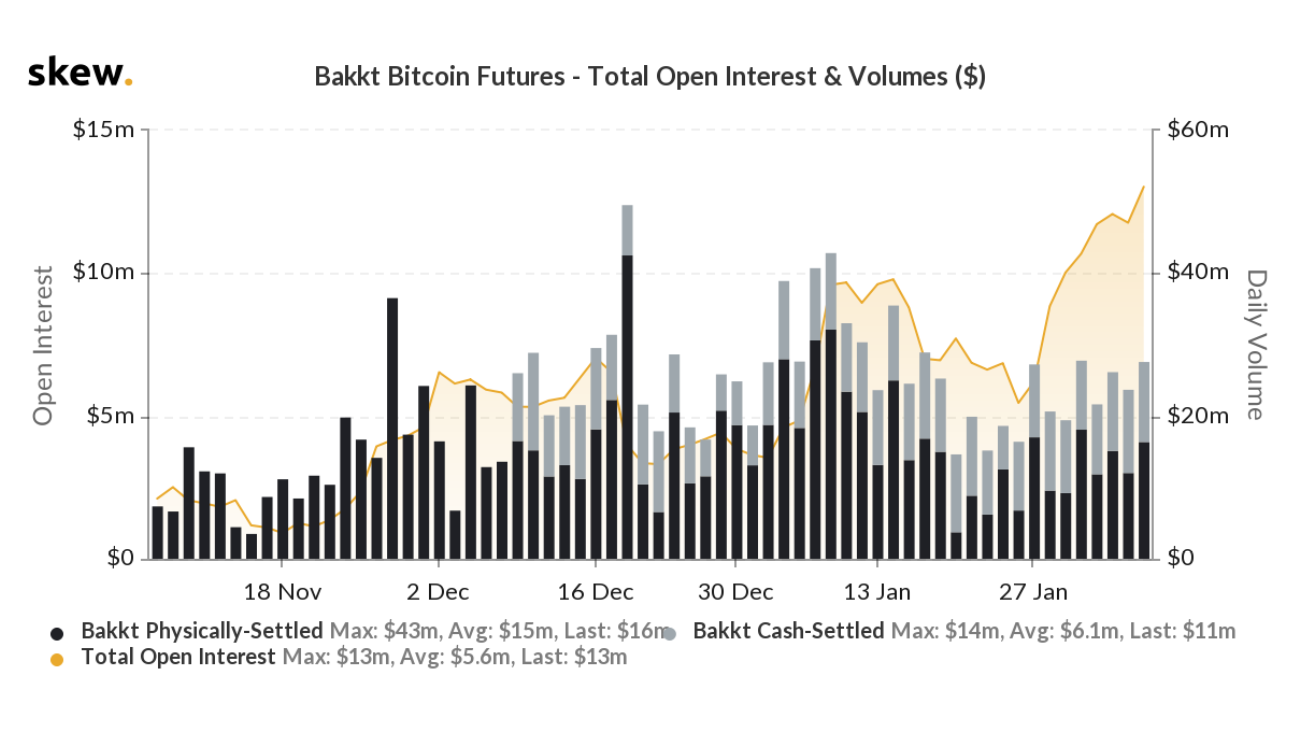 A month later, the Open Interest reached another new high as the total open positions held by the market participants on the exchange climbed to $13 million. The OI had not breached the $10 million mark prior to the 1st week of February, and it was a monumental moment for the institution.

Although stiff competition slowed down its Options volume towards the end of January, Bitcoin Futures Contracts delivered on average in 2020 improved by a massive 1600 percent from 2019. While 2019’s average remained somewhere around 13.3 BTC, the average had jumped up to 203 in February 2020.

However, 13 March rained on Bakkt’s parade as no one saw the unexpected crash which pulled Bitcoin’s valuation down by 38 percent. 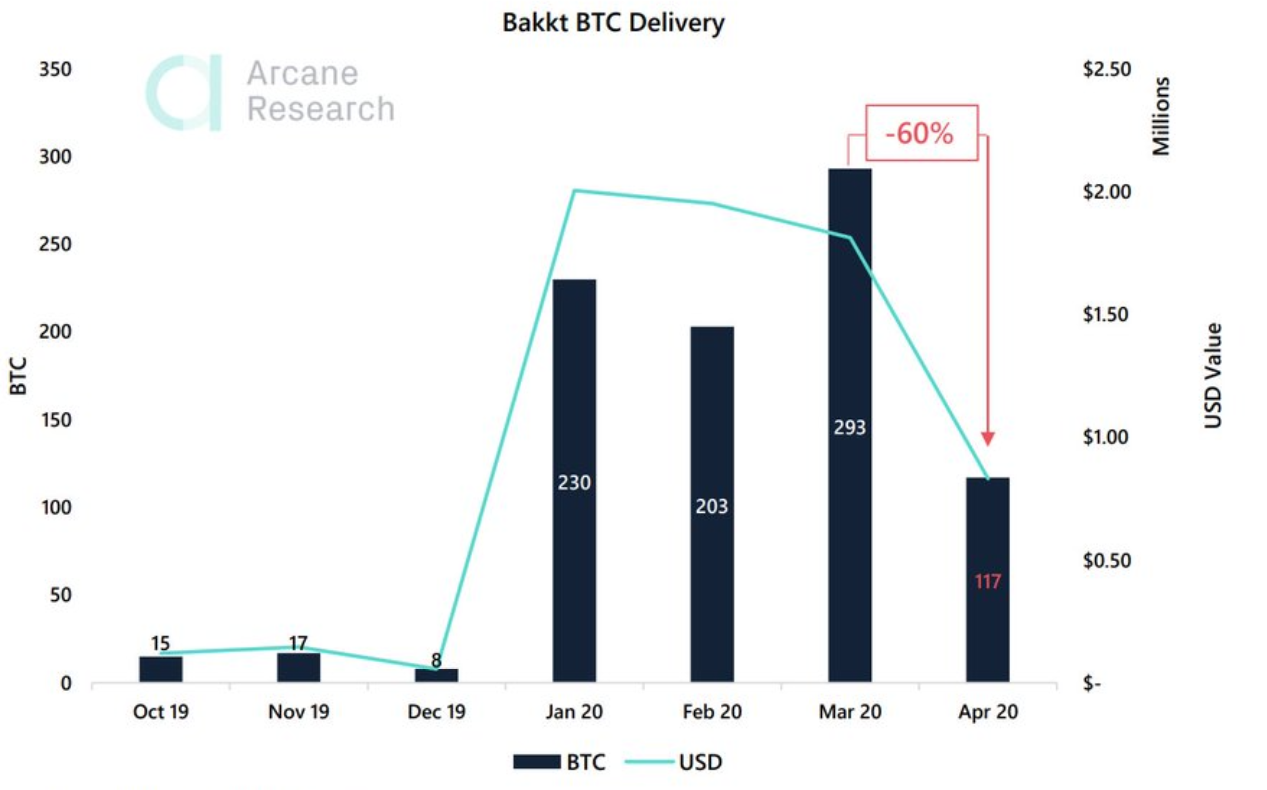 The Bakkt BTC delivery dropped down to 117 BTC in April from March’s high of 293. Regardless of that, developments continued to transpire in other parts of the industry.

On 16 March, a few days after the market crash, Bakkt announced that they raised an additional $300 million in capital from Microsoft’s M12, PayU, Boston Consulting Group, Goldfinch Partners, CME Digital, Pantera Capital and its own parent company, ICE.

The crypto-industry at large was at a significantly difficult and uncertain position after the collapse and no one knew how the future was going to unfold. The fact that Bakkt received an investment of around $300 million at such a time suggested that Bakkt was able to generate a sense of assurance among its investors.

Moreover, later, the market turnaround demonstrated by the crypto-industry was tremendous and Bakkt Bitcoin Futures recently registered an all-time-high in terms of trading volume, as the physically settled and cash-settled contracts amassed over $50 million in business.

Further, in what was a cherry on top, Bakkt President Adam White announced that the firm had partnered with insurance broker Marsh to offer its clients more than $500 million in coverage, in addition to the existing $125 million insurance placed on Bakkt Warehouse. The blog post also revealed the inclusion of more than 70 firms to Bakkt Warehouse and additional plans for the launch of Bakkt’s consumer app in the summer.

The intent facilitated by Bakkt is as real as it gets in the industry today and the image it has been able to carve out since the start of 2020 is nothing short of exceptional.

Will Bakkt weather the CME’s dominance?

Now, if Bakkt had followed the CBOE’s playbook, they would have probably shut down right after the first set of barriers involving low market interest and volume.

Back in December 2017, when CBOE Global markets launched its first Bitcoin Futures contracts in December 2107, positive sentiment in crypto was huge. Fast forward 14 months, the exchange announced that it will stop listing its Bitcoin products since institutional investors had failed to turn up in the space.

CME’s brilliant start did not help its case either as CME Futures’ 30-day average outperformed CBOE’s by more than four times during its launch.

Therefore, it was quite clear that there was space for only one exchange for accredited investors.

Now, if only patience was one of CBOE’s virtue, the top brass in the exchange would not have lamented on their missed opportunity.

Times are different in 2020 and even though the digital asset class continues to be as turbulent as they come, accredited investors have started to make an entrance. The CME’s stranglehold in the market might not be rivaled at the moment because of their experience, but by the look of things, Bakkt isn’t holding back in terms of activity as well.

Bakkt’s volume might be significantly lower than the CME’s, but it continues to have better Futures contract functionality and as more institutional investors arrive in the industry, its stock is only to going to build up even more. Also, the fact that Bakkt is being spoken about in the same sentence as the CME, despite it having not completed even one year in the industry, says a lot.

Not a bad record for an organization that was labeled with tags like ‘too slow,’ ‘lackluster’, ‘damp squid,’ and ‘rather anemic’ when it started. Well, what can I say, maybe the cryptocurrency industry enjoys a good ol’ underdog tale.