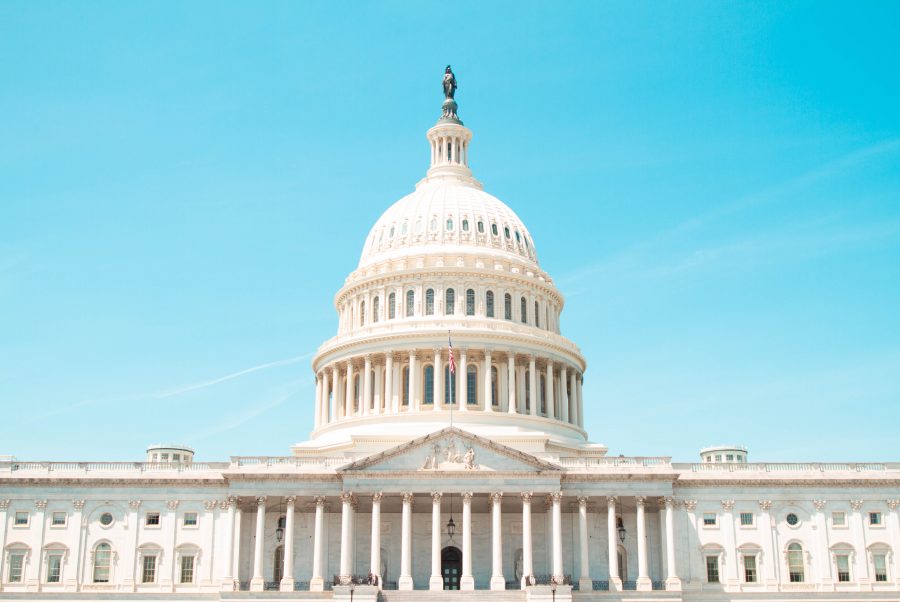 Every industry has a defining entity. One that divides the industry into two opposing halves. For the cryptocurrency industry, that entity is Ripple.

Since its formation in 2012, Ripple has absorbed an obscure part of the cryptocurrency fold – payments-centric & regulatory compliant. It occupies an intersection of decentralized currency, blockchain technology, and institutional finance. Unlike any other.

This fork-in-the-road has contributed to Ripple shimmying away from the cryptocurrency world and into a more traditional outlook of FinTECH compliance.

Ripple has always been seen as a regulatory-compliant company, more so than some people’s liking. But, in 2019, its efforts were accelerated; partly its own doing, partly by external forces.

The world of payments was brought to a standstill when Facebook unveiled Libra. A digital currency backed by fiat and controlled by private companies with no regulatory overseer, it spelled trouble for Ripple. And so it began to double down.

Even from San Francisco, the concern brewing in Washington D.C. was palpable. Ripple began to take stock – in word and action.

We stand with you

With mortars going off on Facebook and the rest of the Libra Association, the larger crypto-community saw collateral damage, Bitcoin and Ripple’s cryptocurrency XRP included. Ripple, hence, wanted to cover all bases, by which I mean leave the stadium entirely.

In July, a truce was called. CEO Brad Garlinghouse and Co-founder Chris Larsen penned a letter to the U.S Congress pleading demarcation. The letter was published as a full-page advert in the Wall Street Journal.

The letter praised central banks and governments in matters of currency issuance and stated that digital currencies should “complement” the U.S dollar and not “replace them.” The U.S should “lead the way in the innovation of  “privacy and stability” fearing the migration of new technologies overseas. The letter closed by pleading a balance of “fundamental differences” between regulators and innovators.

With the timing and contents of the letter in context, Ripple began to deploy.

We come for you

In October, Ripple opened its Washington D.C. office – not to branch out its payments wing, but to shore up its lobbying efforts. Not only was it the first blockchain company to open a Global Regulatory [GR] office in the nation’s capital, its members came with resounding government experience.

This is not a one-off. Derek Schloss, Director of Strategy at Security Token, told AMBCrypto that blockchain-lobbying is surging. He said,

“According to publicly released data from the FEC 2019, there has certainly been an increase in both dollars and entities for blockchain-related lobbying expenditures over the last few years.”

For the cryptocurrency world, confusion was the norm. Regulations are unclear on the definition and distinction between cryptocurrencies, securities versus commodities laws, tax-related issues, Proof-of-Work and Proof-of-Stake incentives, stablecoins and fiat gateways, listed Schloss.

We come from you

Craig Phillips, former counselor to the Secretary of the U.S Treasury Department from January 2017 to June 2019, joined Ripple’s Board to provide insight on “policy leadership.” Phillips, a financial services veteran, had spent over 30 years working for the likes of Credit Suisse, Morgan Stanley, and Blackrock.

Joining Ripple’s International Policy Council in August 2019 was Susan Friedman. A former senior advisor to the then acting undersecretary for International Affairs Heath P. Tarbert at the Treasury, her focus was “international financial services regulations.”

Friedman eventually moved on from her over 6-year career, and so did her boss. Tarbert, in April 2019, was appointed as the Commissioner for the Commodity Futures Trading Commission [CFTC]. Tarbert’s views on XRP are not certain, while Bitcoin and Ethereum’s legal definition is clear. In a recent interview with Cheddar, Tarbert said,

“Right now, we think Bitcoin and Ether are the two that fall in our [the CFTC’s] category…it’s [regulatory status of XRP] unclear, stay tuned, I would say.”

The lack of clarity came down to the ‘asset’s definition,’ as per the SEC or the CFTC i.e. if deemed a security or commodity. “We’ve been working closely with the SEC over the last year or so to really think about which [cryptocurrency] falls under what box,” Tabert said.

Ron Hammond, another August 2019 recruit, joined Ripple as Manager of Government Relations. His move to Ripple came after spending over 3 years as the legislative assistant to the U.S Representative from Ohio, Warren Davidson.

Not only is Rep [R]. Davidson a favorite in the cryptocurrency space, he attended the San Francisco Blockchain Week in the last quarter of 2019 and appeared on Crypto Trader and an edition of the Off The Chain podcast. Unlike his Congressional peers, during the October 2019 hearing [roast] of Mark Zuckerberg, Davidson asked relevant questions.

His popularity is not only in sentiment, but in action too.

The Congressman is the primary sponsor of the April 2019 Token Taxonomy Act. The bill proposes to “amend” the 1933 Securities Act and the 1934 Securities Exchange Act to “exclude digital tokens from the definition of a security.” In addition to this expulsion of the Howey Test norms, the act would “enact certain regulatory changes” for cryptographic digital assets and “adjust taxation of virtual currencies.”

In addition to Hammond being the “legislative lead” on Davidson’s Token Taxonomy Act, he led policy issues on financial services and digital assets.

Before Hammond, Friedman and Phillips, the only out-and-out government-focused senior employee at Ripple, was Michelle Bond, recruited in April 2019. Between 2012 and 2014, she served as Senior Counsel at the SEC. A year prior to that she was a council member on the Senate Committee on Banking, Housing, and Urban Affairs. 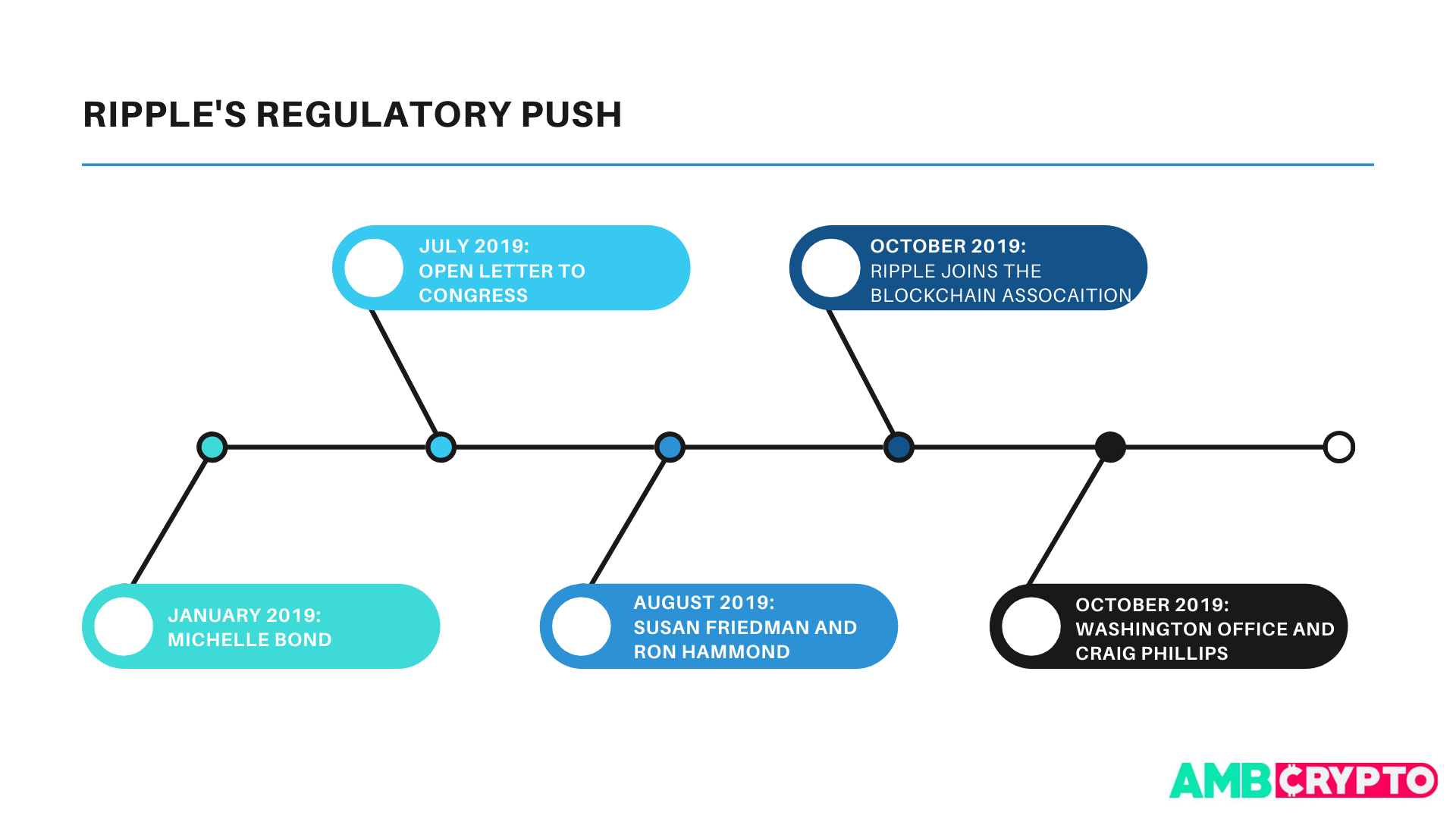 Heading its regulatory efforts is Ryan Zagone, Former Director of Regulatory Relations. Not only has Zagone been a member of the FedPayments Improvement Steering Committee, but he is also is one of six industry members serving on the advisory board of the NY State Crypto Taskforce. Alina Kiselevich, Enigma Securities’ Head of Research, stated that Zagone’s proactive approach provided much-needed clarity. He told AMBCrypto,

“He [Zagone] says, it is much more useful to ditch the “wait and see” approach taken by regulators and bring it on, clear out the regulatory field as much as possible.”

Perhaps the most interesting regulatory acquisition for Ripple is Ben Lawsky, who joined the board in late-2017. A former superintendent of financial services at the NY Department of Financial Services [NYDFS], Lawsky was the creator of the BitLicense, a regulatory requirement that drove out exchanges from Shapeshift to Kraken.

Lawsky’s move indeed surprised many in the cryptocurrency industry, including NY public advocate candidate Theo Chino who clashed with Lawsky on the BitLicense issue. Making no qualms about his opinion, Chino told AMBCrypto,

“Mr. Lawsky is an hypocrite and intellectually corrupt. He did not listen to the industry at the time he was Superintendent and he believed he knew better.”

What does Ripple aim to do by building a team of former regulatory members? From the outside, clarity on education and regulation.

“Ripple’s push in regulatory efforts seems to be motivated by the need to educate regulators on how to develop policies in order to stimulate the cryptocurrency industry,” Laurence Padilla, Head of Research at The Tokenist, told AMBCrypto.

Ripple, in addition to fellow crypto-pioneers Coinbase, Circle, Grayscale, and Kraken, launched the Blockchain Association, a “unified voice” for the industry. Their three prongs to achieve this goal are – Educate, Advocate and Coordinate. Ripple is certainly on course for two of them.

Breanne Madigan, Ripple’s Head of Global Institutional markets, with Rachel Nelson, Coinbase’s Senior Director and Associate General Counsel, were recently announced as the co-chairs of the association’s “Market Integrity Working Group,” which aims to “support the development of public policy that ensures the transparency and fairness of the cryptocurrency markets.” Padilla stated that the association ties-in with Ripple’s larger goal of narrowing the knowledge-gap.

“The association strives to provide education on cryptocurrency, as it is still somewhat new and can be rather complex for those who do not understand it.”

In general, with an advancing and highly disruptive technology like blockchain, combined with cryptocurrencies, there is bound to be information imbalance. Crypto-focused Silicon Valley companies are simply trying to “help lawmakers” in catching up with regulations, said Schloss. He stated,

“Existing players have spent time understanding how the technology works—so we’ve seen a number of major groups seek to participate in conversations with legislators to help craft future legislation.”

Regardless of Ripple’s ambition, with its lobbying efforts in full flow, they’re here for good. Whether this is for the ‘greater good’ of the cryptocurrency industry or to broaden their separation, only time will tell.

Related Topics:featuredLobbyingrippleWashington D.C.
Up Next

Can Ethereum serve as an intraday hedge against stocks and gold?