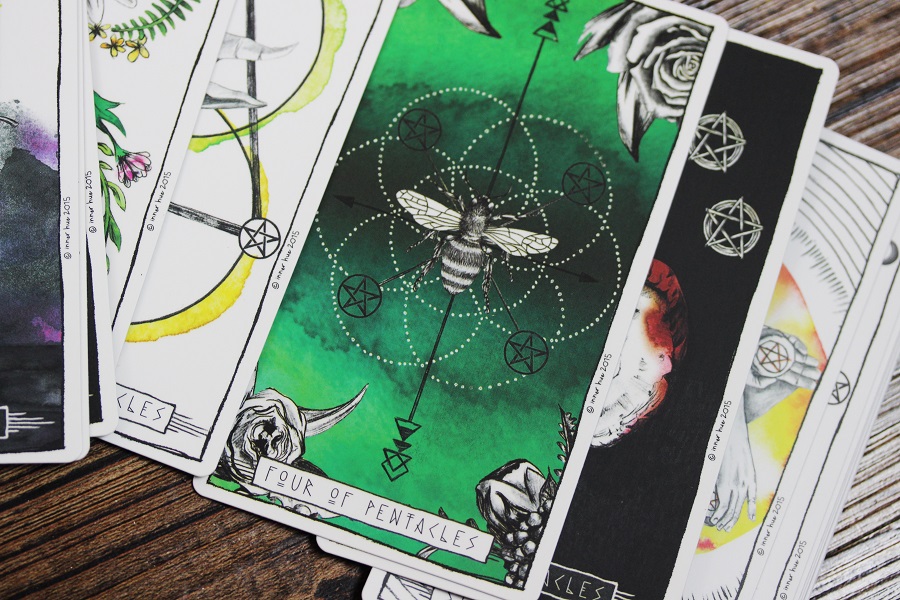 Litecoin and other altcoins are certainly experiencing an altcoin rally, however, it’d be premature to call this an ‘alt season’. As for Litecoin [LTC], it has surged by a whopping 105% in just 37 days, pushing its price from $38 to $78. The market cap of Litecoin has doubled from $2.5 billion to $5 billion. As mentioned in a prior article, the silver coin is continuing in its path to reach higher highs. 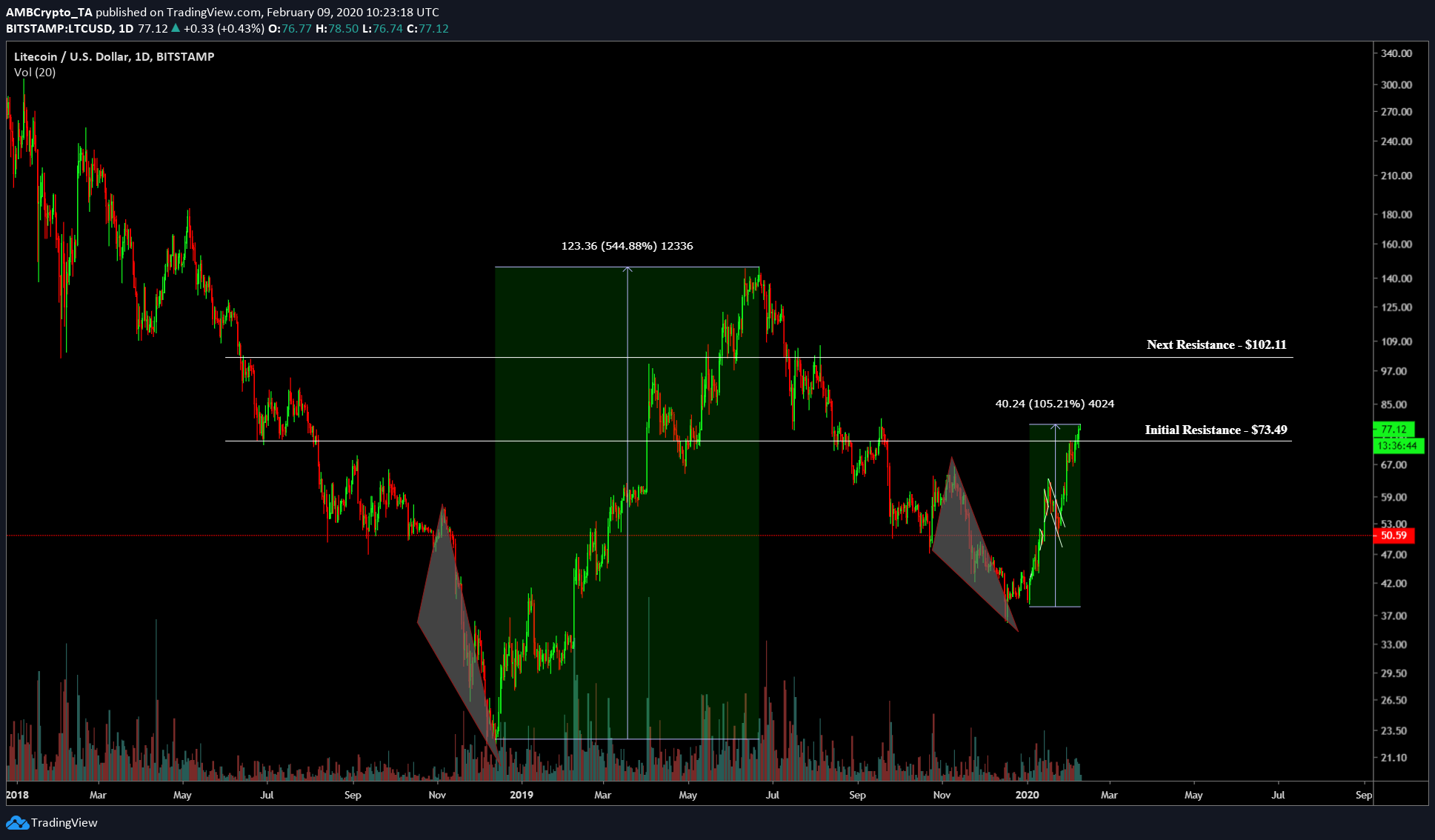 As mentioned above, the price of Litecoin had a possibility of pumping anywhere from $65 to $100. Since then, the price has pumped up to $78, predicted in the previous article. At press time, however, the price has just breached an important level – $73.49; following this, the price will face resistance at $102.11, the likes of which have not been seen since August 2019.

Considering that Bitcoin has crossed an important psychological level of $10,000, the altcoins seem to be pumping. Litecoin, similar to all the altcoins, started its season back in December 2019.

Both the MACD and the Relative Strength Index have shot off to their extremes. The MACD indicator is in a full-swing bullish crossover due to the recent pump. Moreover, the RSI has also crossed into the overbought zone indicating a new high in the near future. 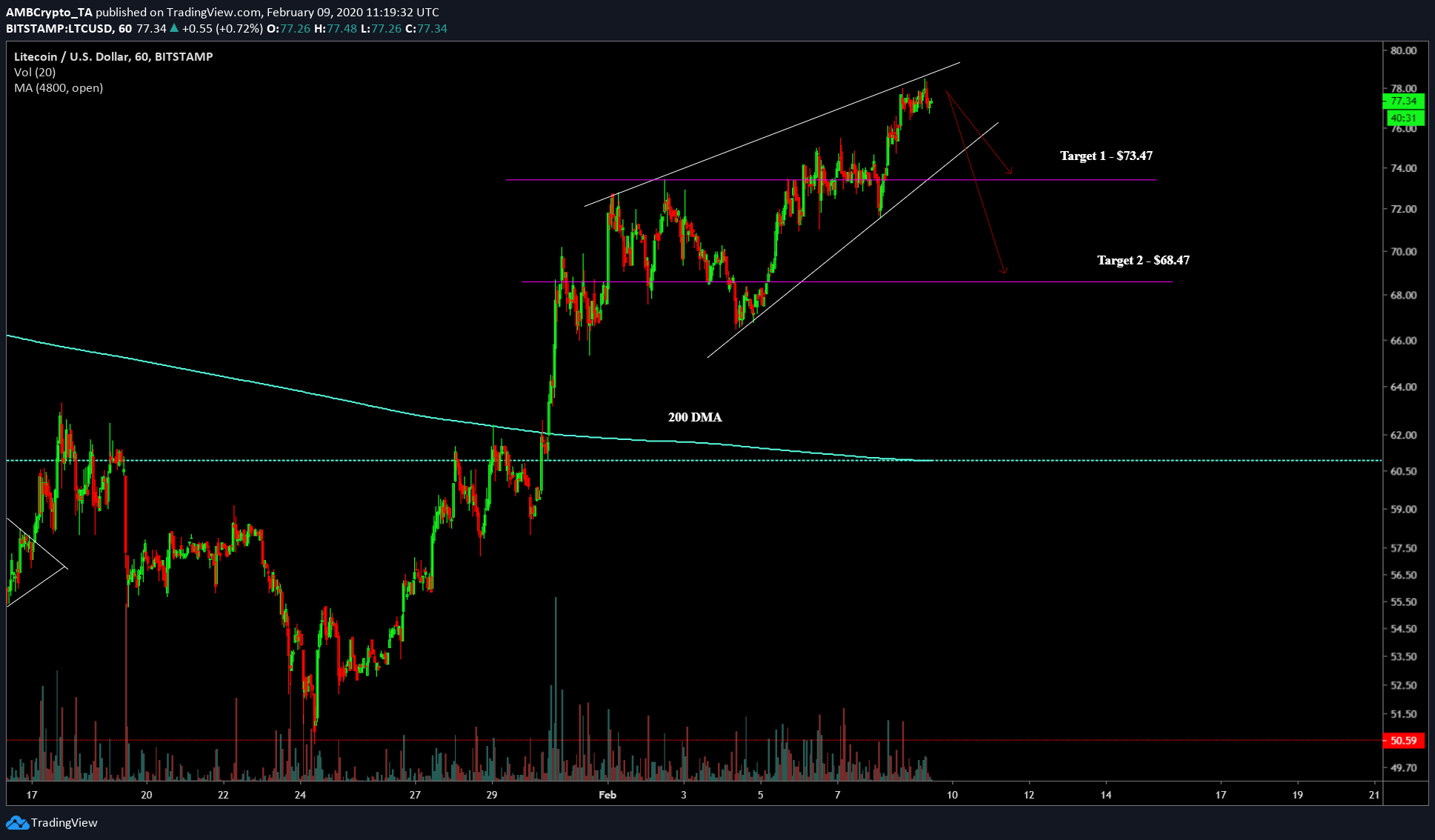 Unlike the daily long-term chart of Litecoin, the hourly chart showed a rather bearish outlook with the formation of a rising wedge. The breakout from this pattern will push the price to two important levels $73.47 and $68.47.

However, opposing this scenario is the Bitcoin-Litecoin correlation, which is at 0.80, last seen in May 2019. If the price of Bitcoin keeps surging then the bearish pattern will be undone leading to higher highs and testing the long term resistance at $102.

Litecoin’s price, like many other altcoins, is on a bull run. The price has already surged by 105% and there is more upside to this surge, at least another 20% to 30% upside. If the surge does occur, it will push the price of LTC above $100. However, in the lower time frame, the price looks bearish with a downside of 5% to 11% aka $73 to $68.

Bitcoin will hit $100,000 post halving based on this pricing model