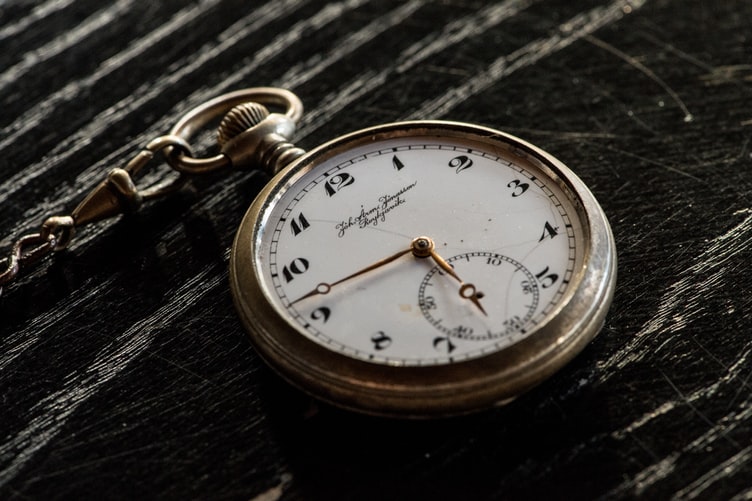 “You will be out of work soon,” told my perturbed mother on call. I was taken aback for a second as I asked her, “What? What are you saying?” It was July 22, 2019, and the Internet was flooded with the news of “India bans crypto” or “India needs regulations, not ban” and I realized that the much-talked-about cryptocurrency draft bill was finally made public and it suggested a ban, thus the frantic call from the birth-giver of a 24-year-old crypto journalist.

The Inter-Ministerial Committee [IMC] constituted on November 2, 2017, finally made the much-awaited crypto draft bill available and it was titled ‘Report of the Committee to propose specific actions to be taken in relation to Virtual Currencies’ under the chairmanship of Subhash Chandra Garg. The 108-page-long draft bill reflected the immense research and effort put forward by the committee towards addressing Distributed Ledger Technology, Virtual Currencies, Central Bank issued Digital Currency and other applications of DLT. Ironically, the committee that appreciated DLT and was ready to explore its applications suggested a complete crypto-ban in the proposed draft bill.

The Indian community respected the amount of research undertaken by the committee but most Industry experts called it a flawed draft. Many publications have already highlighted the lack of understanding of the technical aspects of cryptocurrencies, algorithms, and Bitcoin as a whole.

The IMC mentioned in the report that the committee met thrice in the period between November 2017 and July 2019. 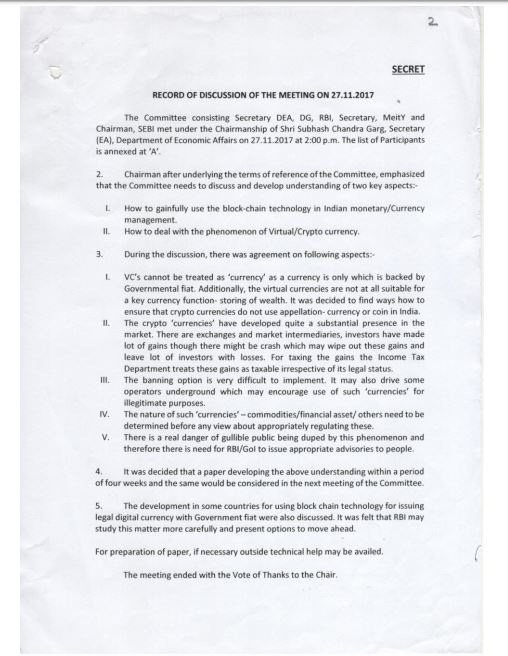 In the first meeting, the Chairman of the committee, Subhash Chandra Garg, urged the committee to discuss the use of blockchain technology in India and asked them to develop an understanding of the ‘phenomenon of Virtual/Crypto currency’.

After much deliberation, the committee agreed that virtual currencies cannot be treated as ‘currency’ as it was not backed by ‘Governmental fiat’ and that it lacked the vital currency function – ‘storing of wealth’ (Although Bitcoin is now considered a haven asset class now, and is considered a store of value). After noting that the cryptocurrencies have a substantial presence in the market, and many businesses and investors made profits “though there might be crash which may wipe out these gains and leave a lot of investors with losses”. The committee decided to tax the gains and noted that:

“The Income Tax Department treats these gains as taxable irrespective of its legal status.”

The series of events that preceded the second meeting included the budget session where, the then Finance Minister, Arun Jaitley declared that virtual currencies were not a legal tender.

The agenda of the second meeting was to “identify the true nature of the crypto asset, how to deal with it in different dimensions and eliminating its use in payment systems”.

According to the notes provided by the Committee, the Deputy Governor of the Reserve Bank of India [RBI], BP Kanungo, CBDT chairman, Sushil Chandra, and the Chairman of SIT (conveyed through CBDT chairman, Chandra), argued in favor of banning virtual currencies. Their arguments were based on the incidents of fraud rising in the country and the prevalent issue of black money.

However, the Secretary [Economic Affairs] interjected with a view of accepting virtual currencies as it could be an economic phenomenon and regulations might yield better results than banning it. He cited the example of South Korea, who recently rolled back their decision on banning virtual currencies and pushed the idea of developing regulations and banning it in payment systems.

After the committee was noted to be split about banning and regulating virtual currencies, the meeting concluded with the view that three detailed papers would be prepared within 15 days. The three papers were:

The third meeting took place long after the second meeting, and according to the notes, the members had decided on a ban considering the draft bill and the onus of implementing the proposed ban would fall on the Police. The reasoning behind this decision was the enforcing body’s experience in dealing with other issues like “gambling” etc.

The committee had discussions over definitions and how the ban can be made air-tight so no illicit activities can take place and discussed the use of DLT. Even though the status of crypto would still be under deliberation as to whether or not to consider it as illegal from day one, ICOs were stated illegal from the beginning.

The committee raised some valid concerns about cryptocurrencies and pointing out that a ban might actually increase the black markets. However, something changed by the third meeting and the same committee was pushing for a ban. Maybe the duration of almost a year between the two meetings or maybe the papers that were mentioned in the second meeting that changed the thoughts of the committee completely. There is no mention of the reasons due to which the committee unanimously agreed on banning crypto under the tag of promoting illicit activities for which it lacked the data to support.

Even though the deliberations had just begun about the nature of virtual currencies, the committee was already discussing the issuance of ‘legal digital currency with government fiat’. As the second meeting was in session, the committee appeared to be divided with those who wanted to ban crypto and those who wanted to regulate it. Despite considering the fact that illegal businesses and activities could crop up if a ban was levied, the committee jumped the gun by recommending a complete ban on virtual currencies. Moreover, the committee failed to understand that the cryptocurrencies are not trying to be a legal tender. The virtual currencies are available from everywhere in the world to trade and the Indian community does not want it to be a legal tender but just a legal status for crypto to deal in it.

Even though these are just recommendations provided by the committee, the bill will have to make several amendments before it could become law. In order to do so, the community has time and again urged the committee and the government to consider their opinions and also of the general public who have invested in crypto and stand to lose all of their money if the current bill is passed.