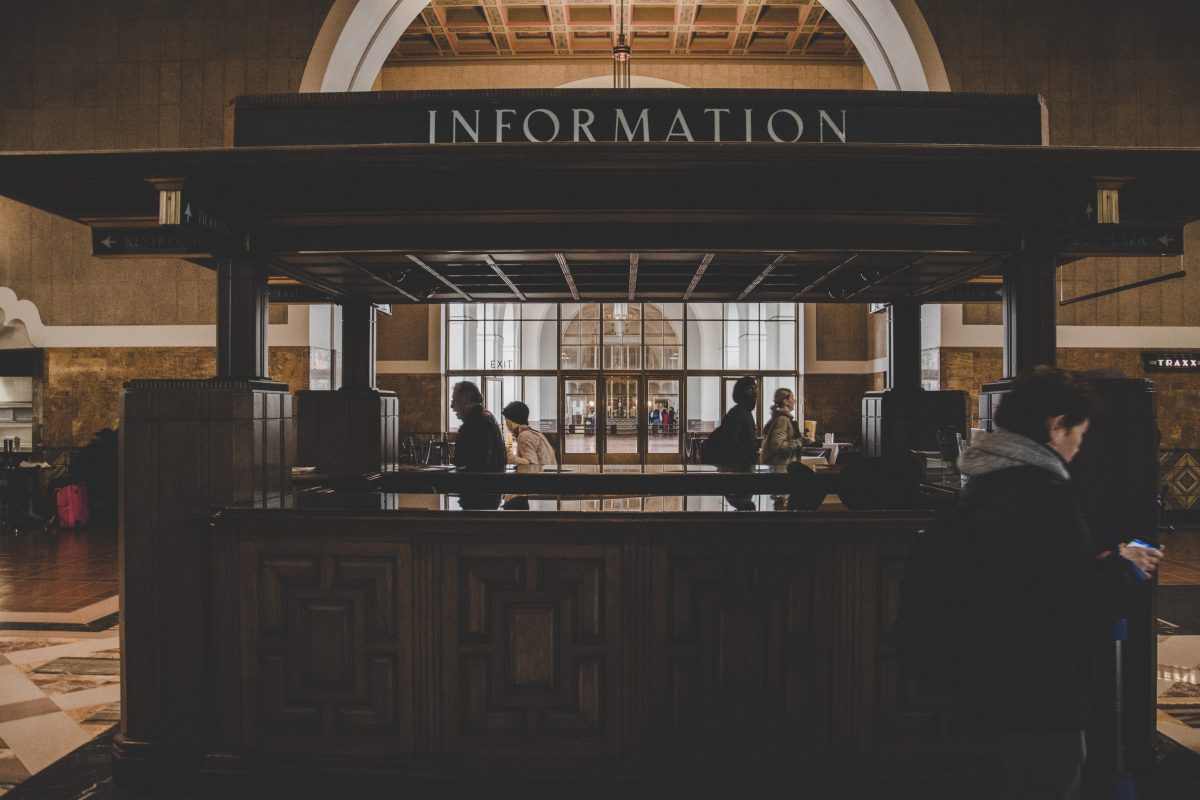 COVID-19 has reminded the world about the importance of information and the bliss of ignorance. Ever since the virus began spreading outside mainland China, there has been only one question on everyone’s mind – “Is there a positive case in my country?”

In a country like India, one that has 1.2 billion people, shares a 3,400-kilometre border with the source of the virus China, and is supported by a weak domestic healthcare infrastructure, an under-insured population, and the largest diaspora in the world, inklings of the next coronavirus epicenter were foreseeable. At a time like this, to be informed was important, if not essential.

In March, when the number of cases in the subcontinent began rising, I remember skimming through various news portals, health ministry websites and health ministers’ Twitter handles to come to terms with the size and scale of the spread. However, with no consolidated domestic tracker and most international trackers looking at the big-picture and not country-level data, it’s easy to sway into the “ignorance is bliss camp.”

Some, instead of being ignorant and quiet, decided to keep the public abreast of what is happening in the country. Sachin Yadav, better known as ze_rusty, a designer from Hyderabad, India, took it upon himself to build a grassroots tracker of domestic COVID-19 cases with the hope of keeping people alert and informed. And you know what else? He funded it all through Bitcoin.

During the early phase of India’s COVID-19 ordeal, when just above 100 cases were reported across the subcontinent, Rusty decided to bridge the information gap. He didn’t do it alone either as behind him was a 6,000-member strong IndiaBits community, one constituted by cryptocurrency enthusiasts.

Gathering like-minded and citizen-conscious minds of the IndiaBits community, Rusty sent out a poll on the Telegram group. In the poll, Rusty was quite clear this would be a tracker specifically for India, complete with all-CAPS, providing useful information about the number of active cases, state-wise breakdown, and other ‘basic guidelines and stats.’ An overwhelming 73 percent were in favor of the website and thus began the creation of India’s Bitcoin-fueled COVID-19 tracker.

Using the tipping bot on the IndiaBits telegram channel, Rusty said he received funds entirely in Bitcoin and no altcoins. Within the first three hours of the crowdfunding campaign, 300,000 Satoshis were pledged. He also put up his Bitcoin address on Twitter, cc-ing a man who knows a thing or two about COVID-19 and Bitcoin, Balaji Srinivasan.

On 15 March, the website went live and according to Rusty, it had 2,000 – 3,000 visits every day for over a month, until the Indian government’s official application was launched.

Will be crowdfunding the domain name, hosting & @webflow subscription ~$40 USD via #Bitcoin on @indiabits21 telegram channel

Rusty’s simplistic design and essential data were features, not flaws, he insisted. Instead of sowing confusion and panic, this tracker was meant to enhance the simplicity of data and not present a hotch-potch of numbers and graphs. He said, in no uncertain terms,

“The reason I wanted to make this was because there was no simple data available anywhere…whatever was there people couldn’t trust, and it was too complicated to go through. So, I thought, people just want to see the numbers. Let’s be honest, you came here to see the numbers.”

The website tracks the total number of cases, patients recovered, under care, and fatalities at a glance. In order to prevent the spread of misinformation, the tracker also provides essential corollary information, not in its own words, but by linking through to official documents of the central government. Further, it displays information such as the official lockdown duration and guidelines on home quarantine period for traveling returnees. 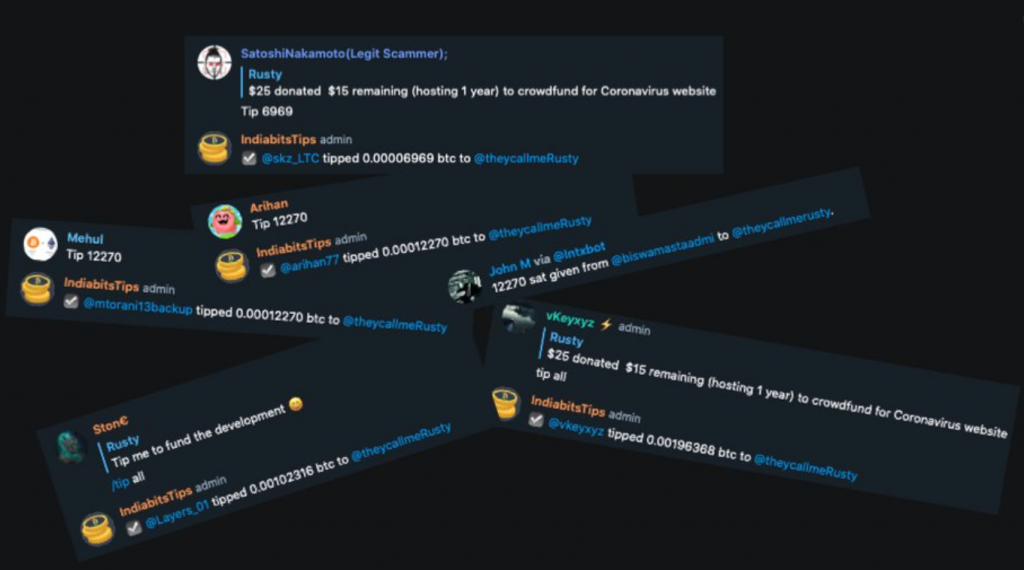 Man on a Mission

Despite being in his early twenties, complete with a snapback quoting “Why Not” as an air of smoke filled the room when we spoke, Rusty is a veteran of the Bitcoin world. He entered the cryptocurrency world as early as 2012-2013 through the path of one of Bitcoin’s predecessor use cases, Liberty Reserve, a digital payment system shut down by the United States government in 2013. For him, Bitcoin was a no-brainer after he got banned by PayPal.

Bemoaning the “in it for the money” crowd who entered the Bitcoin market following the 2017 bull run, Rusty’s vision for Bitcoin stretches far beyond what most people call “Lambo money” or “Bitcoin to the moon.” He stated,

“I realized, there’s more to it [Bitcoin]. Of course, it will get me the money in the long run, if I keep stacking. But apart from it that there are so many important things [in the Bitcoin ecosystem].”

Rusty, an ardent Bitcoin not blockchain supporter, lays the blame behind the anti-crypto narrative at the door of traditional financial media, both domestic and international, and the 2017-2018 ICO boom which resulted in a multitude of scams.

India is no stranger to the ICO cesspool. In 2018, an ICO called Money Trade Coin [MTC] scammed investors of a total of $75 million with the help of an assistant inspector of police. As recently as February 2019, a $200,000 ICO scam with roots in India was advertised on prominent cryptocurrency websites like CoinMarketCap and newsBTC.

No doubt, nefarious minds have used the image of Bitcoin to prop-up altcoin scams, doing away with millions through information asymmetry. However, this tracker, powered by a disparaged IndiaBits community was leveraging the decried power of Bitcoin, to not only show the masses the unifying power of a censorship-resistant, universal, and ubiquitous cryptocurrency but to bridge the once-exploited information asymmetry.

This tracker is an example of the good a community-powered currency like Bitcoin can do.

Weeks after Rusty’s Bitcoin funded COVID-19 tracker took flight, India launched Aarogya Setu, an “open-source cross-platform” application. India enforced the world’s biggest lockdown on 24 March for an initial period of 21 days. However, on 14 April, with just a week to go for the lockdown to be lifted, India’s Prime Minister Narendra Modi announced an extension to 3 May and urged citizens to download the Aarogya Setu application.

However, Aarogya Setu had some “problems.” Robert Baptiste, a French hacker going by the name Elliot Anderson, the protagonist in the TV show Mr. Robot, hacked into the application to revealed several security and privacy issues. In a 6 May blog post, the hacker claimed that nefarious actors could access the app’s internal files and find out the number of infected people in any part of India.

His tweet [mentioned below] caught the eye of the Indian National Informatics Center [NIC] which put out an official statement on the matter. Anderson, however, summed up their reply as – “Nothing to see here, move on.”

A security issue has been found in your app. The privacy of 90 million Indians is at stake. Can you contact me in private?

Perhaps, the perfect analogy of fiat currency and Bitcoin is this game of case-trackers. On one hand, you have a government-controlled fatal disease tracker with privacy and security concerns, sending sensitive health and geographical information to a centralized source. On the other hand, you have a community-created database funded by a decentralized currency. A reflection of the times.

Rusty, who acknowledges the “privacy nightmare” of Aarogya Setu, admits that there is animosity towards non-government currency at large, and he thinks that it runs deeper than the government. Even with the tracker providing essential if not fatal information, Rusty agreed with the notion that the dislike towards the cryptocurrency could’ve fueled people’s assertions about its use-case in the form of the tracker.

Not one to buy into the narrative of centralized social media platforms, Rusty, with his Bitcoin-funded COVID-tracker, faced the ironic ire of centrality, so much so that his website was flagged as a ‘phishing scam.’ Rusty claimed that some of the users of the tracker told him that they received a warning when accessing the link through Twitter,

“There were a lot of people who were coming and telling me that whenever they are visiting the website by from my [Twitter] profile…it was giving them a warning that this might be a phishing [site] or a scamming website.” 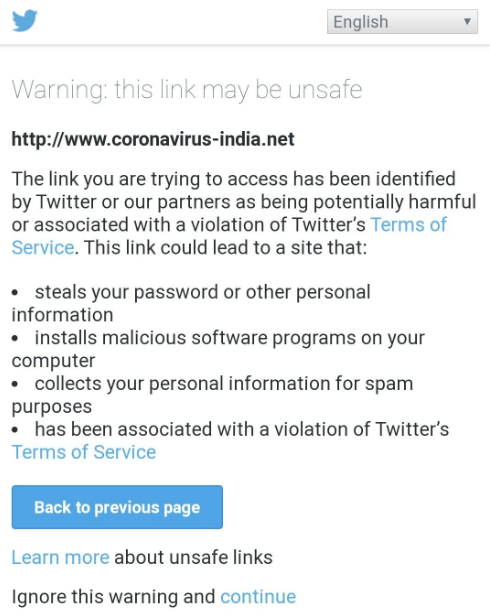 Diving deeper into this Pandora’s box, given the clampdown on what social media websites call “misinformation,” a website not under government control is bound to be a target. “They are playing together,” said Rusty, acknowledging this monopoly of information by social media platforms as they dance to the tune of the government.

Most people get into Bitcoin when they realize the artificial nature of centralized money. The power a government-controlled central bank has to simply print as much fiat currency as it wants in order to temporarily balance the economy is something that is playing out at this very moment.

This ‘money rabbit-hole,’ as Rusty describes it, led him into Bitcoin. He said,

‘When I started realizing this whole money-rabbit hole, that the money is getting printed out of thin-air and the real alternative [is] Bitcoin as a store of value, you can’t inflate it, I was like WOW. No one is here to tell you the truth. So, you have to find your own truth.’

Interestingly, this ‘money rabbit-hole’ also led him down another path. Through Bitcoin and the thesis of ‘control your own finances,’ Rusty was led down the path of ‘control your own food,’ dispelling the truth in nutrition. As his Twitter bio puts it, he’s here to “unf*ck your Nutrition,” finished off with a lightning symbol, the initiation of Twitter’s deep Bitcoin-verse.

Unlike the chicken and egg conundrum, of which Rusty advocates eating both, he told me “I got into Nutrition because of Bitcoin.” Sounds strange, right?

Yet, he stands by the association and claims that there are ‘myths’ in both money and food. It’s no wonder he’s a subscriber to the “cult” [his words, not mine] that believes in “Sound money and Sound nutrition.”

How do they ensure this, you ask? Simple – he advocates following a “Carnivore diet” with a Bitcoin underlining which is summed up as “Stack SATS and Eat meat.”

Giving has always been a part of the Bitcoin community, and this tracker is the beginning of the Indian cryptocurrency community’s philanthropic testament.

While numbers are a good start to keep the public informed, the ambitions of Rusty and the Indian cryptocurrency community don’t stop there. When India enforced its lockdown, the worst-affected were also the poorest. India’s domestic migrants were left in economic limbo. With no source of income and no means to travel back to their hometowns, many were left hungry and homeless.

Looking at their destitute state, Rusty claimed the community was planning on raising a further INR 1 lakh [~$1,300] in Bitcoin to provide food and basic sanitation to the migrants, but unfortunately due to logistical fallacies “we had to drop the plan,” he lamented.

Bitcoin and philanthropy is quite a common association. With the ease of setting up a wallet, the universal nature of crypto, and the simplicity of use, many charities and foundations including the Wikimedia Foundation, the Red Cross, Save the Children, and United Way, among others, have received Bitcoin donations. In 2018, Fidelity Charitable reported $69 million received in cryptocurrency donations from just 169 donors, marking a 10-fold increase since they began accepting Bitcoin donations in 2015.

Rusty with a wry smile and a glint in his eye attested to the ‘philanthropic’ nature of the Bitcoin community and claimed that while they couldn’t do their part this time around, in the future, there will be more opportunities to show the public the true nature of Bitcoiners in India. He concluded,