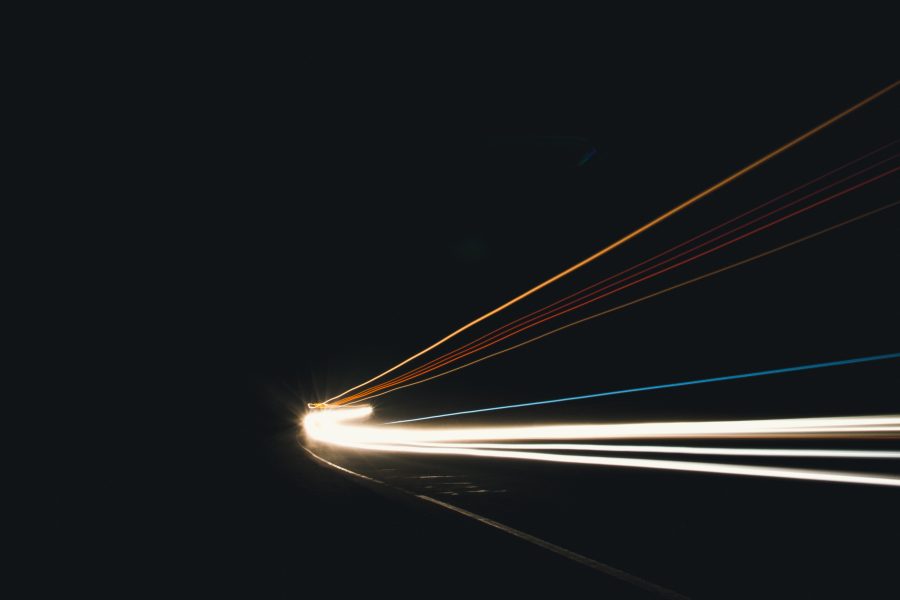 If institutional investors are to be believed, the only way for Bitcoin is up.

With Bitcoin breaking $9,000 for the first time since November and showing the first signs of actual volatility this year, institutional investors have got their tails up. Bitcoin Futures contracts traded on the Chicago Mercantile Exchange [CME], in the short-term and the long-term, are now trading at a premium.

According to a report by Arcane Research, “most contract” trade on the regulated Futures exchange is seeing a premium over the past week. There is no doubt that this is a result of Bitcoin’s incredibly bullish activity in recent days. On 14 January, the world’s largest cryptocurrency broke the $8,000 mark, before breaching $8,500. After some resistance, the $9,000 mark was broken late on 18 January, with the 200-day MA being left in its wake. 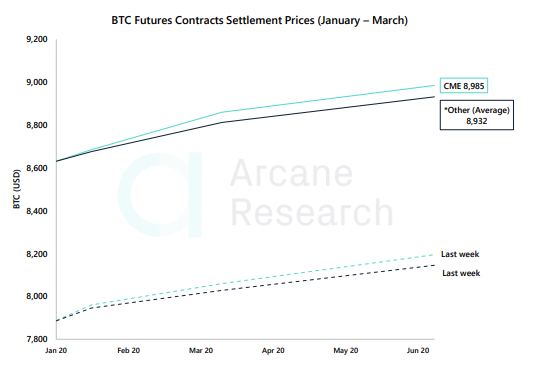 The immediate expiry of the January contracts has seen the premium shrinking, now at 0.63 percent, across the CME and other platforms. Arcane’s report stated that investors are “bullish on the first half of 2020,” with the contracts with a June expiry trading at a premium of 4.10 percent on CME and 3.52 percent on other platforms.

Here, it should be noted that the Bitcoin’s block halving is scheduled for May 2020. With a 50 percent reduction in the rewards received per block mined, dropping from 12.5 BTC to 6.25 BTC, the price is expected to rise, compensating for the fall in mining incentives. 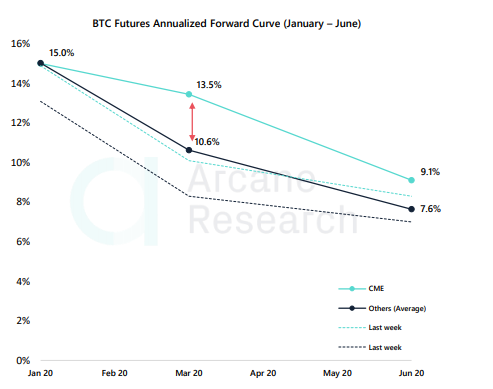 The March contracts are also trading at a premium of 2.65 percent, against the 2.1 percent premium offered by competitors.

When looking at the annualized Bitcoin Futures premium rates, it is clear that trades on the CME are more bullish than their peers. The annualized premium on the CME is 13.5 percent, against 10.6 percent on other platforms for March 2020. Going forward three months, the June 2020 figures are 9.1 percent for CME traders and 7.6 percent for the others.

Furthermore, the annualized premiums across platforms have been increasing since mid-December. This is due to Bitcoin’s price showing some volatility during the close of 2019, before exhibiting a massive breakout in early-January owing to favourable macroeconomic conditions.

The last time annualized premiums were in the double-digits was in November, a time when China had a chokehold on Bitcoin’s price. Since then, it has dropped to as low as 6 percent on the CME and below 2 percent on other platforms.

Now, Bitcoin Futures premiums are finally looking up, and so is the price.

Related Topics:Bitcoin FuturesCMEPremium
Up Next