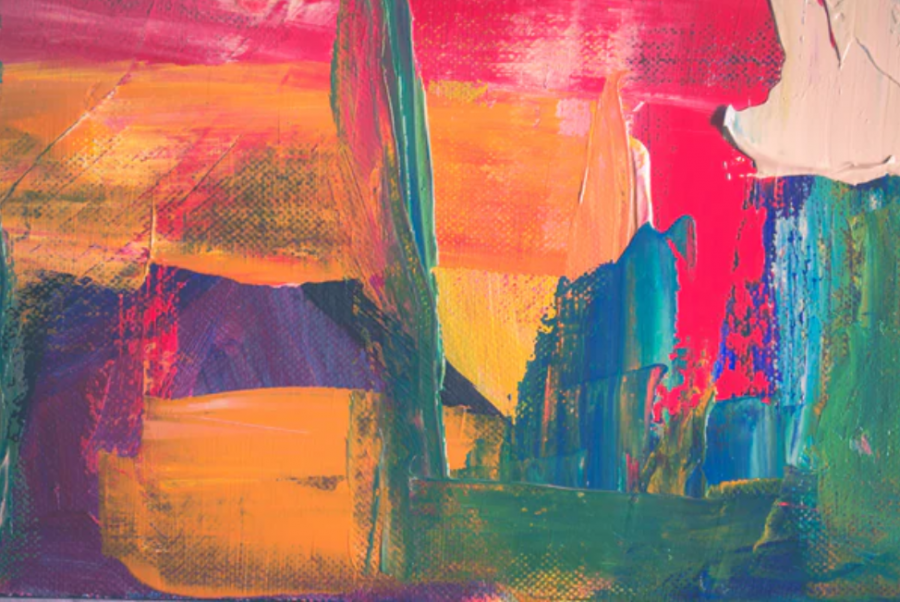 Art is a reflection of society, and more often than not, it talks about reality. It evokes conversations with subtle brushstrokes.

Art is primordial and has existed since time immemorial. But, it has continued to recite forgotten tragic tales, while portraying what is usually kept hush-hush. Art aims to challenge the social construct and address crucial narratives that otherwise don’t see the light of the day. Whether it is a depiction of a President as a clown or a sketch of a warzone, art has always rebelled against political, social and orthodox forces.

One such technological advancement and avant-garde that has disrupted the legacy institution realm, which seemed to have failed the people they serve, is the creation of Bitcoin and more broadly the world of cryptocurrencies.

And the romance between the two has just begun.

14 Small Electric Chairs by Andy Warhol will be remembered as a piece of artwork that grasped progressive technology almost three decades after the death of the artist. It is astonishing as to how much has changed since then.

The digital sale of this artwork was iconic. Primarily because it was the world’s first-ever blockchain art sale which enabled fractional ownership of the artist’s masterpiece. This was done by Maecenas in 2017 and the gallery behind the world’s first cryptocurrency art auction was Dadiani Syndicate.

31.5% stake of the 14 Small Electric Chairs was tokenized and sold to bidders who paid it via Bitcoin, Ethereum, or the native token, ART. Each of the token shares was determined by a smart contract on Ethereum’s blockchain.

Art in the commerce sector

The contemporary art realm is plagued with corruption, money laundering, and theft. Evading tax obligations by purchasing a piece of art by the rich is not a novel concept either. Numerous “prestige” galleries and institutions along with wealthy collectors have made art a vehicle for their money laundering schemes.

There is a Tom Keating everywhere. In fact, The Independent had reported that at least 20 percent of the paintings held by major museums across the U.S, some up on the walls and many others in the vaults, are fake.

Gone are the days when artists and their artworks’ anonymity had an air of mystery. Now, provenance and authentication are made easy by blockchain technology.

For starters, the artwork is selected and then follows the process of tokenization after a certified curator values it. Proving the artwork’s authenticity is the certificate, which is stored on the blockchain. This contains the artwork’s intrinsic value and this is where the artwork is converted into digital tokens. Representing ownership, these tokens are issued to potential buyers.

Buyers can also diversify their portfolio by purchasing tokens on multiple artworks.

Thanks to blockchain’s features, tokenization of art not only improves the liquidity of artworks by digitizing the ownership into tradeable tokens, but it also offers a solution to the age-old problem of provenance – easy to track the origins, easy to authenticate the artwork, and easy to verify its previous owners.

A novice can avoid the expensive galleries of Paris and Florence and instead, showcase their artwork on a distributed ledger, thereby eliminating the need to pay third-parties or agents.

And Bam! Art Democratization, it is!

What is in the pallet?

“Taking back power of the middlemen is a good thing for creativity. Art needs more freedom and cryptos can bring some financial freedom for the artists who want to innovate. It can help artists to have a more direct relation with the people who love art and it can bring more horizontality in the business of art.”

Paris-based Pascal Boyart is the first artist to have affixed a Bitcoin QR code to his mural paintings for donations. While the crypto-crash in 2018 did not spare the mural painter who “had to buy fiat at a very expensive price to pay taxes,” he does not really care about volatility and does not see any shortcomings in the fusion of art and blockchain.

It’s not much of a puzzle as to why billionaires and wealthy merchants go gaga over big art and expensive artworks.

For one, savvy investors can evade capital gains tax. Under Section 1031 of the United States Internal Revenue Code, “a taxpayer may defer recognition of capital gains and related federal income tax liability on the exchange of certain types of property”, a process known as a 1031 exchange. The U.S Congress delivered a blow to the art collectors after it tightened a provision in the tax code; however, it continues to remain popular among the rich. A reason for this could be the status symbol factor.

Investing in art, in general, is a tough job because barriers are too high. Times have changed. People who cannot or do not want to risk thousands of dollars on a single piece of artwork can now invest in art.

While speaking to AMBCrypto about art tokenization, the French entrepreneur, FEKI, whose expertise lies in fractional ownership business models, said

“When someone owns a percentage or a ‘fraction’ of a piece of art, they can’t bring that piece home. They can’t enjoy the prestige and appreciation of owning the item exclusively – which is part of what inspires collectors to buy pieces. So this is purely for investment.”

Buying tokens of the artworks are similar to buying shares, meaning an art collector or an investor no longer has to purchase the entire piece, but can buy a few shares and hold onto them for years.

While art might not always appreciate with time, it does serve as a good investment, especially for those looking to diversify.

FEKI believes that fractional ownership of art can have the advantage of giving an investor a reason to learn more about the art market because they are investing in it.

“The overwhelming benefit of fractional art ownership is purely financial: it’s an investment that needs to compete on a numbers level with the stock market and other investment avenues. Fractional ownership democratizes art investment, not art ownership but it is only attractive if the platform allows its investors to make money.”

Is fine art a fine investment?

While tokenizing art may sound appealing, according to Sukhi Jutla, Co-founder and COO at MarketOrders, it might actually “overvalue or inflate the price of the artwork” and buyers may find they are paying more for a smaller piece. She said,

“Then, there is the lack of homogeneity between different artworks, which makes it difficult to value and price a fraction of the artwork; this may lead to buyers questioning if it’s really worth the investment.”

The Co-founder went on to say that while most businesses offering tokenized art also promise that the buyer can still make money by trading the token which is backed by the asset [the artwork], such promised exchanges are yet to materialize. 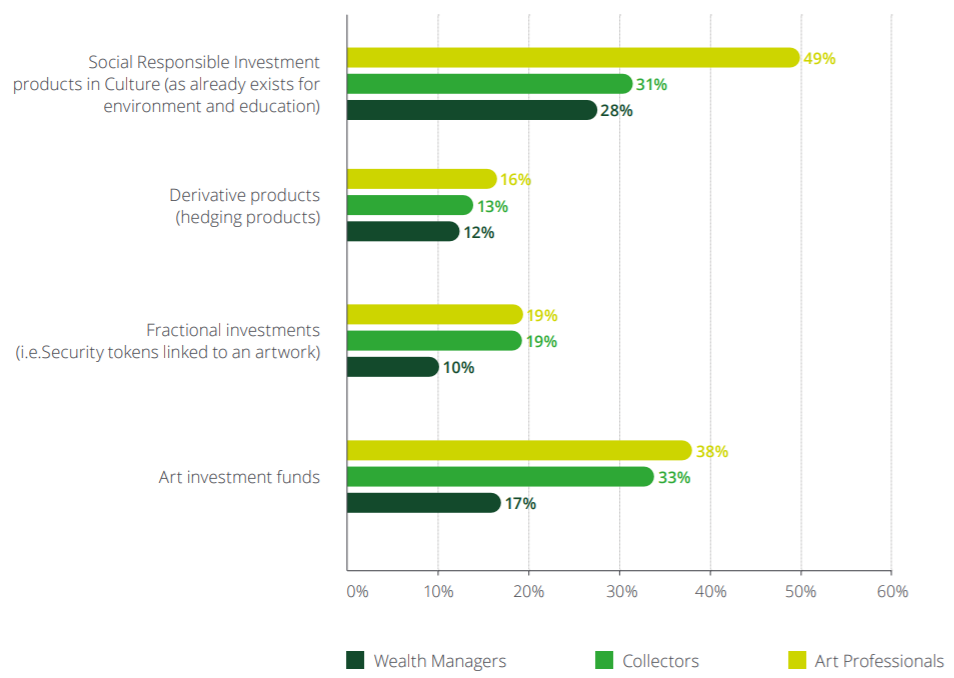 Source: Deloitte | Generation Gap, in terms of investing in art

According to Deloitte’s Art and Finance Report,2019, the fractional investment model has only been able to interest and convince 19% of all collectors and art professionals of its feasibility.

In fact, this has been a rising trend among the younger generation of aesthetes as well. According to Hiscox Art Online Report 2019, 49% of all millennial art buyers, aged 35 years or below, responded that they would consider fractional ownership of art as a form of investment.

Three years ago, fractional ownership of art was a massive hullabaloo in the crypto-realm, with proponents enthused that the fusion would transform both realms. However, the above statistics suggest that only the younger lot are more encouraged and more receptive to this whole concept.

“The future of fractional ownership could be bright, but a certain number of challenges need to be overcome to make it mainstream.”

Only Bitcoin’s peer-to-peer electronic cash version will be ‘most popular:’ Roger Ver