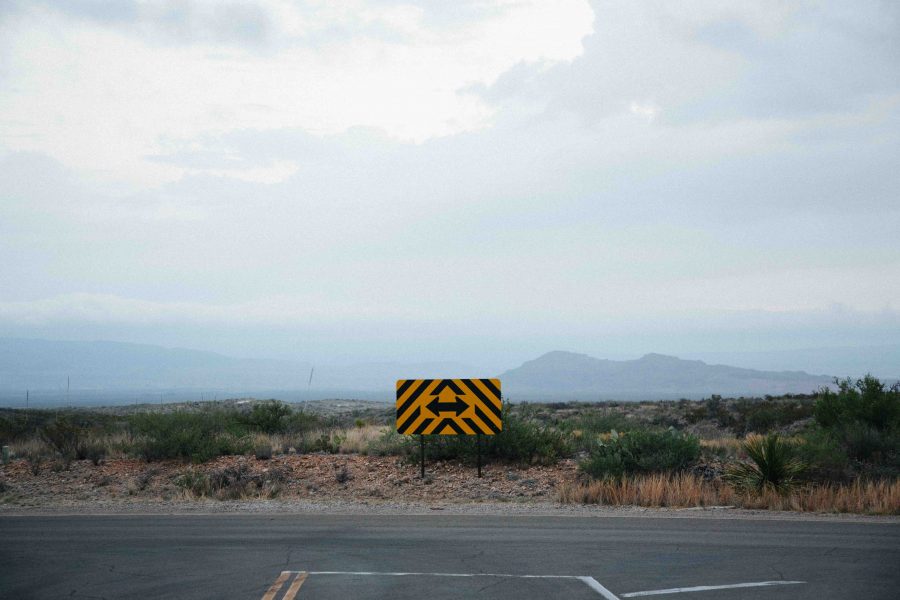 Despite the fact that Bitcoin is in its second decade of existence, it is still seen more as an investment, rather than as a means of financial freedom. The claims of the cryptocurrency being a store of value or a medium of exchange still exist in theory, but in practice, Bitcoin remains a tradable asset.

That tag of a “tradeable asset” came in 2017 after Bitcoin broke into the mainstream. With the CME and the CBOE launching Bitcoin Futures, the asset class became legit. This marked the start of the age of crypto-derivatives.

In 2018, the market took a negative turn. Fledgling investors who just jumped on the Bitcoin band-wagon lost millions, crypto-prices took a calamitous fall, and investors needed a new get-rich-quick scheme, the crypto-way. The growth of the derivatives market, hence, was the perfect solution.

With derivatives products, investors could hedge against Bitcoin’s price without the coin itself. Amid the slumping price of the cryptocurrency, the market began shorting Bitcoin; and while the prices dropped, the derivatives market only grew.

BitMEX, the Seychelles-based derivatives exchange, famed for offering a whopping x100 leverage on their premier Perpetual Swap Bitcoin contracts, saw their volume surge by 507 percent from 2017 to 2018. 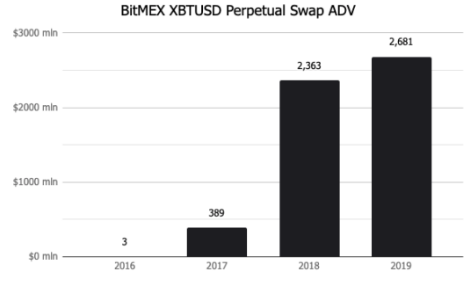 Bitcoin is not that different from other derivatives-hungry financial assets. Like gold, Bitcoin is an asset that has always required a strong derivatives market. Both traditional gold and digital gold, from an investment point of view, have no need to be stored in a vault, be it in tonnes or in private keys.

Derivatives products were a given for both assets and in time, they came about. Quicker for Bitcoin, than for gold.

The Money Project, in 2017, assessed the low estimate volume of global derivatives to be $544 trillion, with the high estimate putting the sum at over $1,200 trillion. Capriole’s Charles Edwards put the fiat supply at $90.4 trillion and depicted the difference graphically, 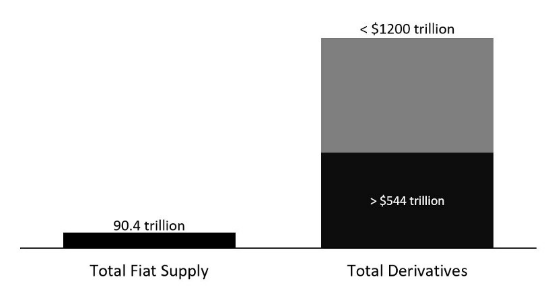 Edwards told AMBCrypto that the derivatives market for Bitcoin, despite being a third of the spot, is “huge relative to Bitcoin’s history.” Noting the above difference between a traditional market’s spot versus their contractual size, he expected the cryptocurrency derivatives market to see a “similar transition” in the next 5 years.

Despite notching up volumes in the billions, traditional derivatives platforms like BitMEX are not the preferred option of institutional investors, for a host of reasons. The exchange is based off-shore; it started off in Hong Kong and is now in Seychelles. Controversies of insider trading still riddle the exchange, BitMEX was recently under the CFTC’s radar, and it doesn’t seem to have the best record with keeping data safe. Not to mention the massive leverage, scaring off the conservatives.

Institutional investors prefer the traditional, regulated, weekday-only CME and CBOE. Only CME, now that the CBOE has pulled out of the Bitcoin Futures market. Hence, an adequate gauge of Bitcoin’s institutional attraction to the deep-pocketed investors of Wall Street is the Chicago-based exchange. CME’s Futures volume is “Wall Street’s trading activity on Bitcoin, in a nutshell,” stated Quantum Economics’ Co-founder Mati Greenspan when he spoke to AMBCrypto.

Like any derivatives market, volatility is welcomed. In 2018, while Bitcoin may have been on a steady drop, the next year saw it all over the place, following which investors on the CME were soon licking their lips.

Bitcoin began at $3,400, reached $13,800 in six months, and closed off at $7,200, defying predictions. The daily volatility of Bitcoin’s price, in both directions, pushed the CME to 6,000 contracts traded daily or 30,000 BTC in 24-hours. Even with Bakkt competing post-October, the volume still held up. CME’s volume, in dollar terms, is still over 9 times that of Bakkt’s daily volume. 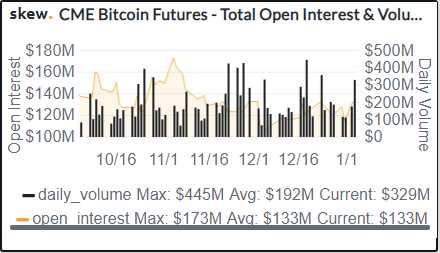 It’s clear to see that the CME’s volume has been on the up-and-up throughout the year, but why hasn’t that translated into a much more amplified effect? To answer that question, it should first be asked what does an underlying derivatives market want. Putting it simply, derivatives require a product that cannot adequately be held. Bitcoin does satisfy that need, especially to non-tech and scrip-savvy Wall Street investors.

Demand for a product is also essential, which arises, realistically, from the volatility of the market. While some classify it as erratic, Bitcoin’s volatility in the past year has been measured. Since reaching a 30-day BTC/USD volatility of 8.05 percent in January 2018, a time when prices were in freefall, the metric has not crossed 7 percent. The last recorded high was 6.9 percent in June 2019, when the Libra-induced wave took Bitcoin to a YTD high. 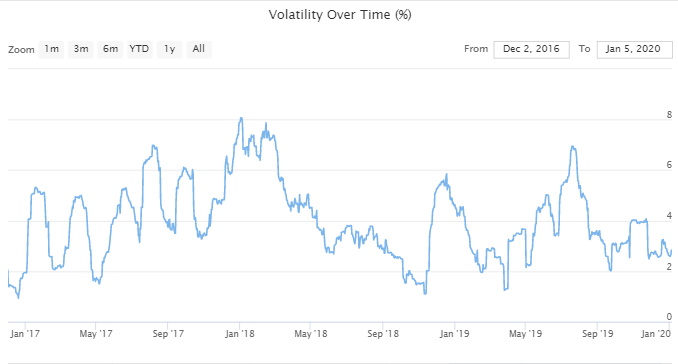 Even that latest rise was measured, doubling down on the pump since the beginning of the second quarter. Institutions, in fact, were riding the 2019 wave with the average number of CME contracts traded daily seeing 2 ATHs in 3 months and rounding off over 7,200 contracts or $370 million in volume a day, according to Tim McCourt in August.

With the necessary prerequisites of volatility, risk, regulations, and demand present in the underlying market, why have the CME volumes only notched up a third of Bitcoin spot-volume [as per Bitwise’s findings], despite having the backing of institutions on Wall Street?

CME’s Bitcoin Futures might not be the derivatives’ pick of the larger market. However, for Wall Street it is. With capital supposedly rushing-in and other investment avenues looking bust, cryptocurrency derivatives hitting a bottleneck despite prerequisites everpresent is peculiar.

Regulation, it seems, is yet again the main culprit in this blockade. “Legislative uncertainty regarding Bitcoin,” is how Kawa Ford, BX3 Capital’s VP of Legal put it. Speaking to AMBCrypto, he claimed that it is the single greatest “major hindrance to mass adoption.” Even on the derivatives trading desk, Bitcoin’s legal uncertainty is a problem. Despite the CFTC spelling out in 2019 that Bitcoin is not a security under the Howey Test, so to Ethereum, the uncertainty in approving an ETF and the cases of altcoins delving into security status does ring up the market.

Derivatives might be mere speculation, but it is calculated speculation, according to Ford, evidencing his statement with airline companies hedging fuel prices with oil derivatives. While no institutions are actually “using” the underlying Bitcoin, it would be “worthless” to speculatively trade it. He added,

“With this legislative uncertainty in mind, it is almost purely speculative to invest in the Bitcoin futures market because it could technically be outlawed, which would render Bitcoin futures worthless.”

Moving across the pond, a group that can hedge Bitcoin’s price with its own efforts are miners, sprouting an actual used case. Bitcoin miners can essentially lock-in a price using Futures contracts, shorting the contract, expecting a drop, or buying put-options while expecting a profit. Edwards stated that this process will allow miners to settle into the market, by assuring them of a return.

“Such a process can assist miners in achieving more certainty in their revenue streams, allowing them to better manage their operations to ensure they achieve profitability. This certainty also makes the cost of ‘switching’ to other cryptocurrency mining greater.”

This is a more worrying concern this year with the halving fast approaching. Every halving results in an inevitable miner decline. As their rewards decrease, in order to keep the hashrate up, the market adjusts the price of Bitcoin to increase miner return. In fact, some claim that this halving pump has already been priced-in and hence, no after price-effect should be expected.

If this is the case, then the need for derivative contracts is all the more essential for miners to lock-in their prices post the halving and ensure a return. Miners, if using this strategy of hedging, could trigger a surge in derivatives trading as a means to protect against the priced-in nature of the halving.

Futures is the way

Derivatives trading no doubt saw a natural progression in 2018, followed by an evolution. While many saw this evolution in terms of regulated and deregulated, CME and BitMEX, the larger market saw it as institutional and common sense.

CME is the preferred option of Wall Street, who are only dipping their toes, fearful of the regulatory alligator that roams the waters. Outside the U.S, exchanges are allowing investors with an actual stake in the Bitcoin process a method to hedge against the risk of price uncertainty and hence, posit a significant part of the market.

No doubt the spot market is growing with increased Bitcoin trading. However, the bigger picture suggests a more accelerated growth for Bitcoin derivatives, on the deregulated side. And this growth is a simple response to market uncertainty, and not another avenue to make a quick buck on the back of Bitcoin.

Global CBDC will pose a ‘Power of many, Use of one’ problem