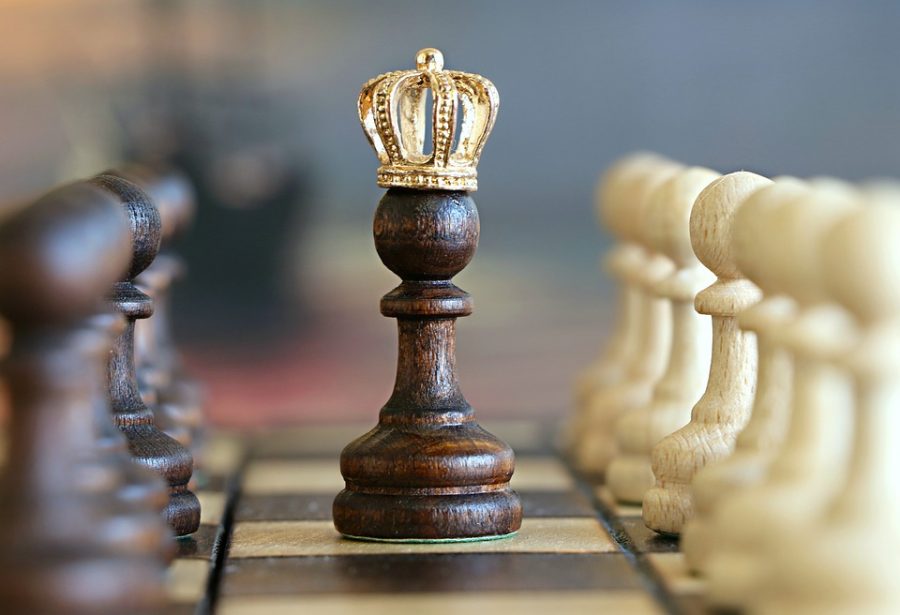 Roger Ver’s Bitcoin Cash seems to be stepping up in the race to accelerate mass adoption after the coin recently surpassed Bitcoin in retail spending in Australia. This was found after Bitcoin BCH, an online platform, released a report which tracked the total cryptocurrency usage in Australia for the month of September.

The website arrived at the results by combining data from two payment processors namely, Travelbybit [TBB] and Hula aka Hockings Underwriting Logistics App, further estimating the total spend along with transaction count for each digital asset in Australia. Total retail sales in cryptocurrencies were $39,405, and were used for over 625 different transactions. 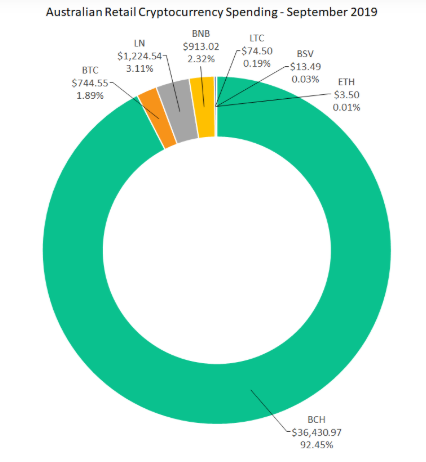 The above chart reveals that Bitcoin Cash [BCH] dominated the crypto-retail spending space in the country, with BCH accounting for 92.45% of the transactions, which is $36,430.97. On the other hand, other cryptocurrencies were seen lagging far behind. The Lightning Network recorded about 3.11%, which accounted for $1,224.54, while the Malta-based cryptocurrency exchange Binance’s native cryptocurrency, BNB, accounted for 2.32% of all transactions, which came to be $913.02.

The largest cryptocurrency by market cap, Bitcoin accounted for only 1.89% of all transactions, worth $744.55. Other prominent altcoins like Litecoin [LTC], BSV and Ethereum [ETH] were barely used for any retail spending in the country. 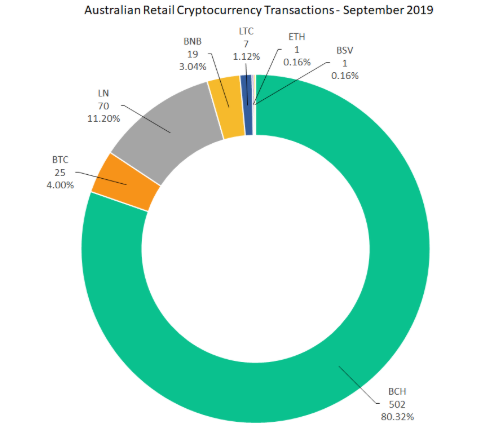 The above chart represents retail transactions in cryptocurrencies in Australia, where BCH was again seen ruling the space with a share of 80.32% as it constituted about 502 transactions. Lightning Network again stood second as it initiated about 70 transactions with a share of 11.20%. Bitcoin, on the other hand, recorded only 25 transactions, and accounted for only 4%.

These statistics are pehaps confirmation of Bitcoin Jesus Roger Ver enthusiastically revealing last month that several restaurants in Australia had extended its support to BCH by accepting it as payment option. The tweet in question read,

“#BitcoinCash is about to become spendable at 1000s of real world restaurants across #Australia thanks to @livenpay who chose #BCH due to its massive user base and ease of use! #LVN is listing today on http://ZB.com and http://exchange.bitcoin.com soon.”

Australia seems to be growing remarkably crypto-friendly as the country’s largest refinery, Perth Mint, recently announced the launch of a gold-backed Ethereum token which would be guaranteed by the Western Australian government.