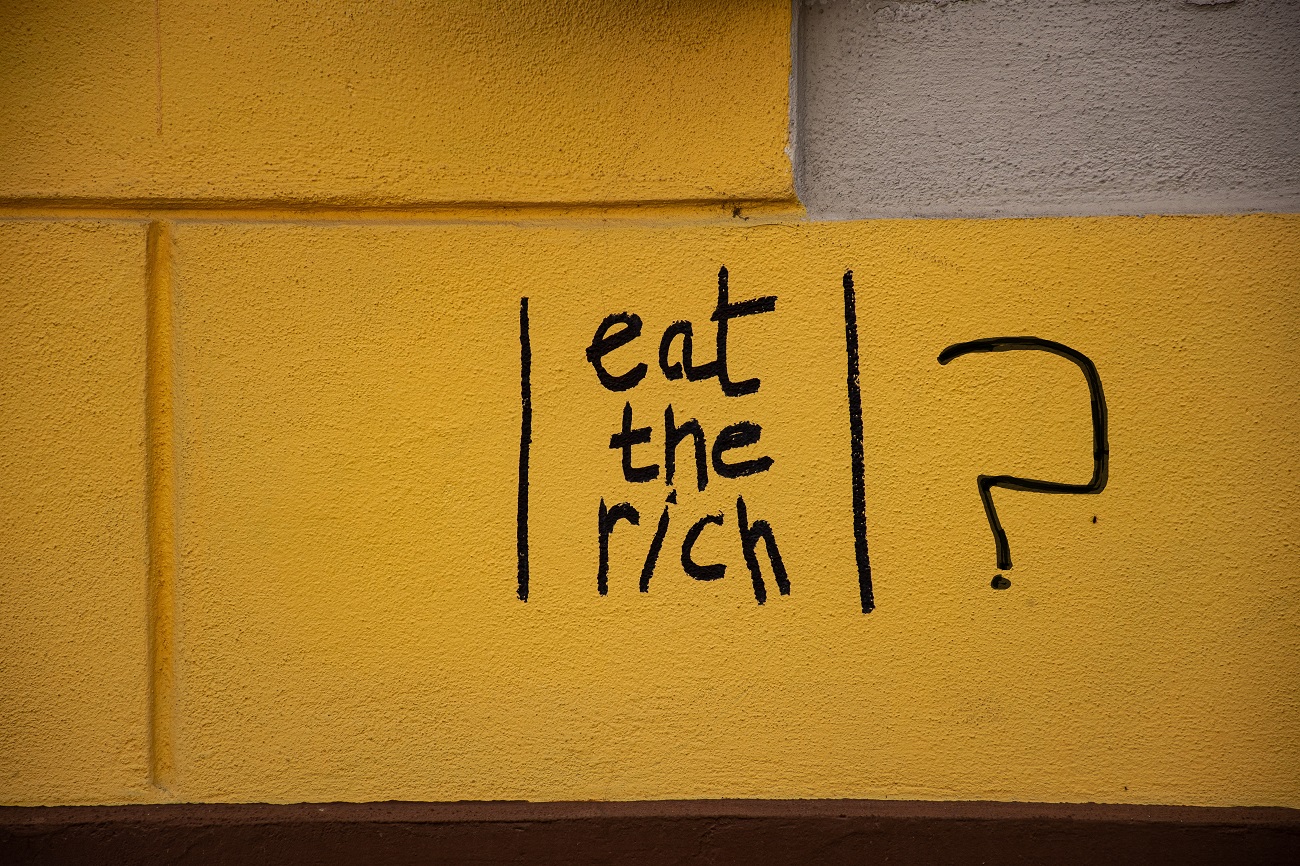 This high premium on crypto products by Grayscale has been the talk of the town ever since the halving when the news of the firm’s bitcoin accumulation became known to the general public. Although the rumor was that the firm had bought up 150% of all the bitcoin mined, it is clear now that this number is 31% when the “in-kind” purchases are factored in.

Regardless the only thing that matters for this article will be the premium of Grayscale’s GBTC product and how institutions are leveraging this to make a nice profit by dumping their shares on retail.

Grayscale and its premium

At press time, Grayscale has $4.8 billion GBTC Assets Under Management [AUM]. The capital raised during the first half of 2020 [1H20] has come up to $1.4 billion with record inflows. Perhaps it is due to bitcoin’s ability to act as a hedge during the recent financial crisis as the new investors accounted for 57% of the investor base in 2Q20, up from 49% over trailing 12-month numbers [T12M].

GBTC has a dual ownership structure which means that institutional investors can create new shares in-kind at NAV using an investor’s existing Bitcoin holdings or buy shares at NAV with a minimum investment of $50,000 during a periodic private placement round.

Unfortunately, Grayscale has stopped including the ratio of in-kind and cash-based investment and the Q3 2019 report was the last report to include it. According to this report, more than 80% of the inflows were “in-kind” and not cash-based.

This points to two things again; either the investors are lending their bitcoin holdings at NAV to create GBTC shares or borrowing Bitcoin. This thread leads to another rabbit hole which is for another day. 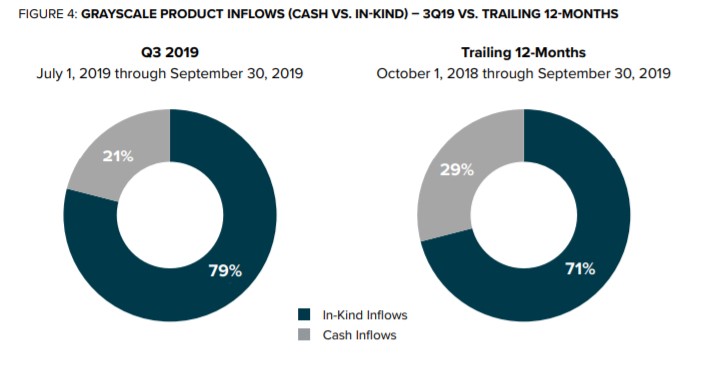 The point is that either way, institutional investors and/or accredited investors are buying GBTC shares at NAV and thus are able to profit by selling these shares to the retail for a huge mark-up which is the premium. 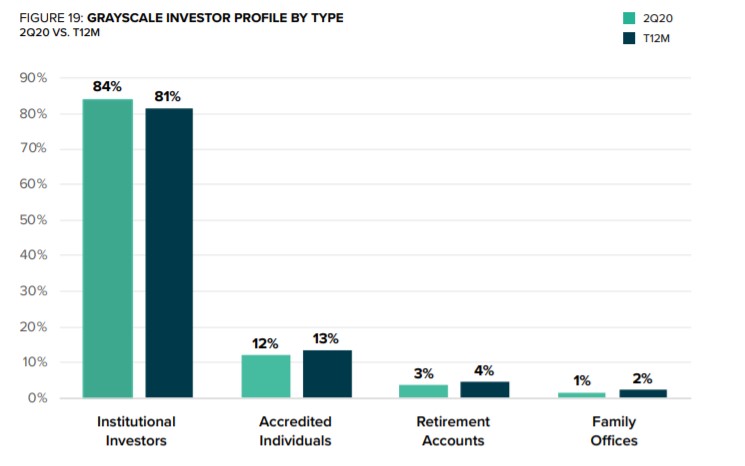 What does this mean and how is SEC involved in this?

To understand why there is a “premium” understanding Grayscale’s product and SEC’s involvement is pivotal. Since bitcoin and other cryptocurrencies are inherently volatile Grayscale’s private investment vehicles are only allowed to those who have the financial ability, sophistication, experience, and willingness to bear the risks of the inherent asset/product. Hence, the offerings of these products are made only to qualified investors who are termed as “accredited investors” according to Regulation D of the Securities Act of 1933 (the “Securities Act”.

SEC’s argument is that since the product is a security, the resale of the product according to Rule 144 under the Securities Act should happen only after six month holding period.

Hence, investors cannot redeem until the holding period is completed, which is what leads to the exorbitant premium that is witnessed in Grayscale’s products.

Secondary markets involve retail and the only way for them to be exposed to bitcoin is by these shares via their brokerage accounts or 401Ks. Although there is a premium, the reason for it to have sustained this long is because of the retail demand.

Hence, the adage, “It takes two to tango” comes into the picture.

So what are institutions with huge sums of money doing? Simple, they borrow undercollateralized BTC from lenders and use this loan to create GBTC shares in-kind at NAV. The next step involves holding the shares for six months and OTC selling these shares on the secondary market [retail] and take a huge profit due to the premium.

What’s the proof of this?

Well, the simple answer is that the reason the premium exists is due to the involvement of both institutions and retail. The complicated answer can be broken down into 3 bits:

The 1st is the increase in bitcoin holding since the end of Q1. It should be noted that March 2020 observed a massive crash due to the pandemic and hence accumulating position since the crash would be extremely profitable. Positing the above are the stats that show that the quarterly inflows doubled in 2Q20 at $905.8 million as compared to 1Q20.

The 2nd bit is that Grayscale’s bitcoin inflow was greater than the bitcoin mined post halving. It should be noted that this does reflect the direct flow of newly mined Bitcoin. 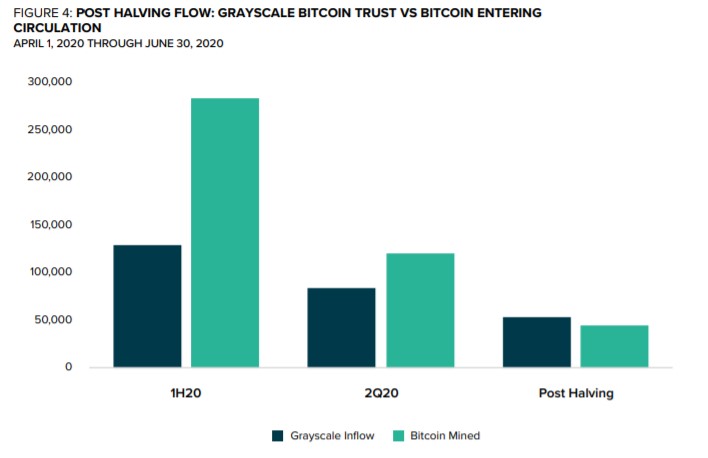 And finally, the 3rd aspect is 3 Arrows Capital which admitted to owning 6.26% of all the GBTC shares.

CEO of FTX, SBF Alameda explained this could be a result of relatively lower borrowing rates for undercollateralized BTC as compared to the GBT premium. As can be seen with institutional lender Genesis Capital, which showed that Bitcoin and Ethereum are the most borrowed assets.

Bitcoin and Ethereum together constitute about 58% of the loan portfolio. However, this shies in comparison with BTC and USD equivalents which together comprise 83.2% of the value.

The rich get richer and the poor get poorer

Bitcoin has had a strong performance despite the crash in March that disrupted the financial systems across the world. Since GBTC to retail is only available via the secondary market they have no option but to invest in it. 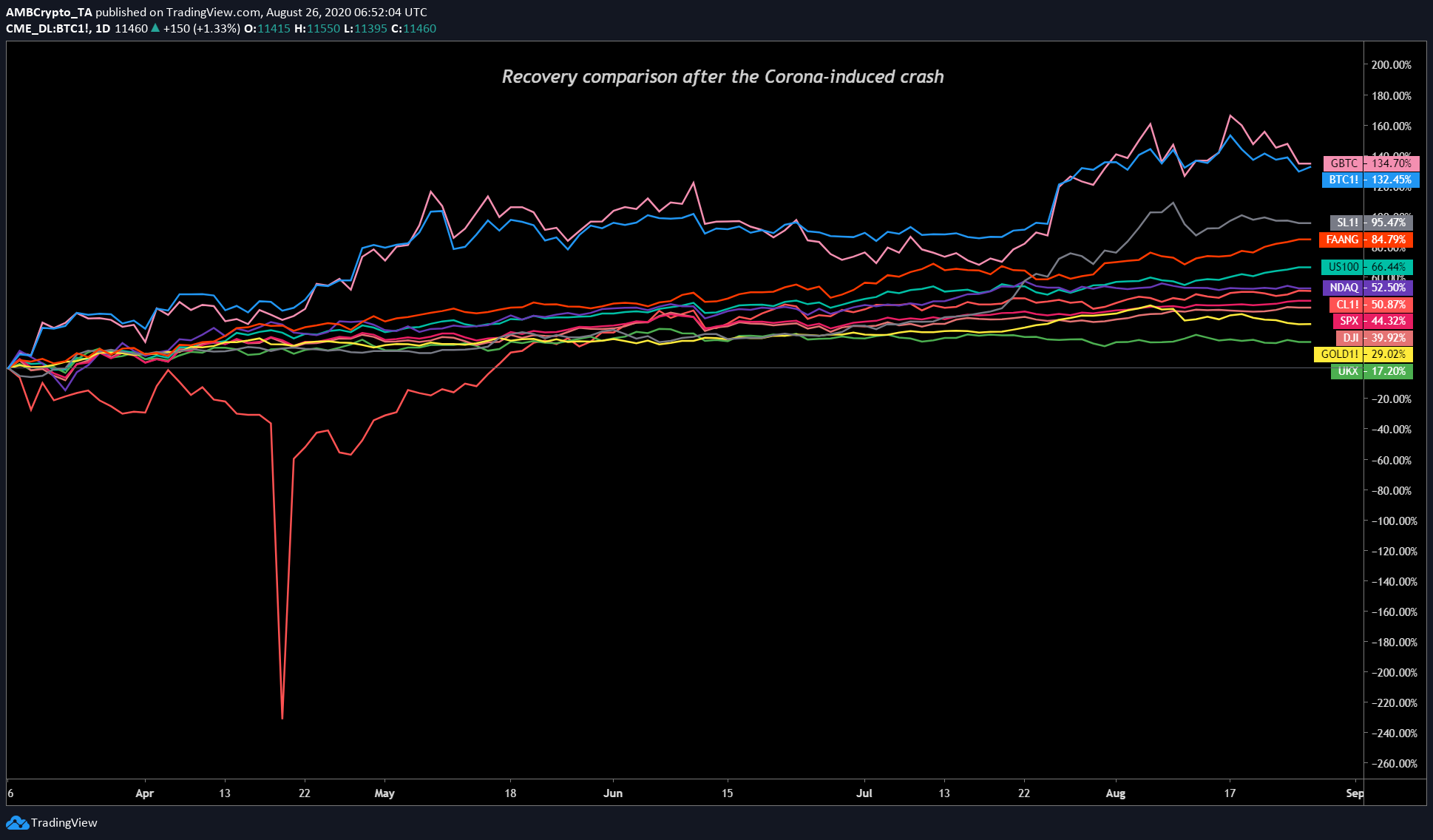 From the above chart, GBTC’s recovery since the crash has been the highest with a 134% increase since the drop. Trailing it are BTC and silver with surges of 132% and 95% respectively.

In addition to this, a small inclusion of BTC in one’s portfolio will provide all the diversification one needs. Firms like VanEck and JP Morgan have already confirmed it with their experiments.

“Bitcoin’s co-movement with all markets over the past five years has been near zero, which would seem to position it better than the Yen or Gold for hedging purposes.”

Clearly, bitcoin’s performance and its importance as a tool for portfolio diversification are unmatched yet still products like GBTC are only available at NAV for institutions and accredited investors who can make huge profits due to the premium.

Hence, it can be concluded that it is wrong to presume that institutional interest for bitcoin is increasing especially considering the high premium that benefits them.

Grayscale declined to comment on the matter whereas 3 Arrows hasn’t responded yet.

Related Topics:ETHEGBTCgrayscalegrayscale premium
Up Next