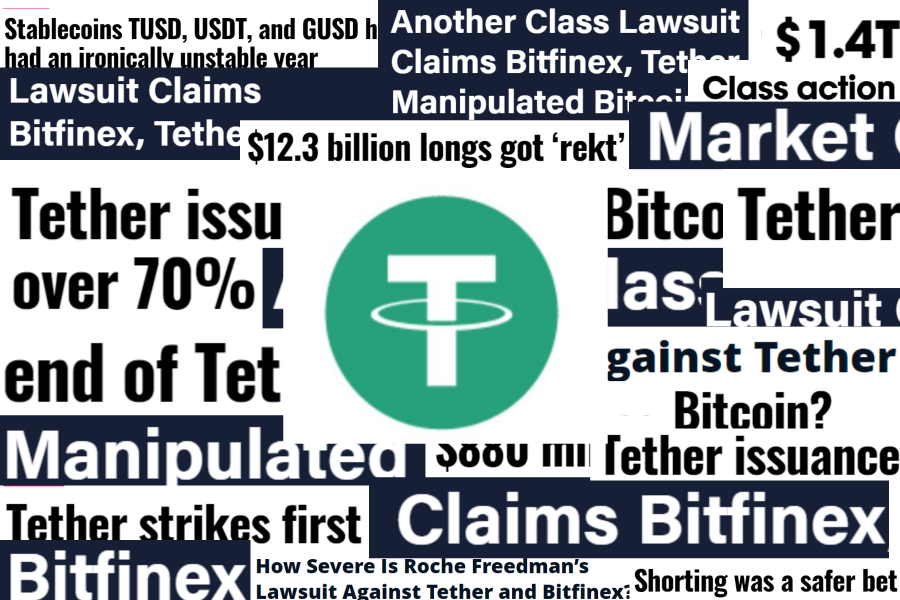 Stablecoins have shaped the fabric of how cryptocurrency transactions happen. The idea behind a stablecoin might have arisen out of necessity, to have an easier way to access cryptocurrencies. However, it has since radically morphed and evolved, while still addressing the initial needs. Even though there were multiple stablecoins before Tether, it now holds the biggest market share, and it may, in fact, enjoy a monopoly.

Tether has become the go-to stablecoin for retail users, which explains its massive control. Even with mysteries, rumors, and allegations shrouding it, Tether seems to be dominating other stablecoins.

As 2019 comes draws to an end, it is a good time to summarize Tether’s performance, events that transpired connecting Tether and Bitfinex, among other things.

2018, termed as the ‘year of the stablecoins,’ allowed the launch of many stablecoin projects. Some predicted that the dominance of Tether would slowly reduce to a point where other stablecoins would rise to the occasion. However, that was certainly not the case as Tether still controls a lion’s share of the stablecoin market.

As 2019 started, so did a lot of developments in the stablecoin ecosystem. Tether-centric developments included the lawsuit against Bitfinex and Tether by the New York office of the Attorney General, a lawsuit which led to the disclosure of $850 million in funds that were allegedly covered up, revelation of Tether’s reserves, 74% of which were backed by cash, and the issuance of Tether on multiple blockchains like Tron, EOS, and even on the Liquid Chain. Another development was the re-publishing of the academic paper by John M. Griffin, one that carried a new allegation that stated that a “lone whale” manipulated the 2017 bull run. Tether soon responded to the same, squashing it as flawed.

Source: Tether (As of December 10)

In hindsight, Tether seems to have come out unscathed, but it was definitely not a walk in the park. The NYAG’s lawsuit took an unexpected toll on Tether and Bitfinex. Additionally, the class-action lawsuit by Roche and Freedman LLP was a cherry to top it off, with both these lawsuits still ongoing.

Even with a barrage of lawsuits and allegations, Tether and Bitfinex’s developments did not come to a halt. As a headwind to their developments, halfway through 2019, less than one-third of the stablecoin projects that promised to go live failed to so. Other important developments included the integration of the Lightning Network on Bitfinex and the addition of an AML compliance solution by Chainanalysis.

A Look Under the Hood

Although the NYAG’s case is ongoing, Tether did not stop printing USDt when the lawsuit was filed. However, Tether stopped printing USDt a few months ago. The market cap of Tether hit a ceiling after the ~$4 billion-mark. By 11 September, $100 million USDt was added and the market cap of USDt has remained more or less the same since then.

“The inflow of new capital into the crypto industry has stalled during this period. Therefore, Tether’s market capitalization has not grown significantly.” 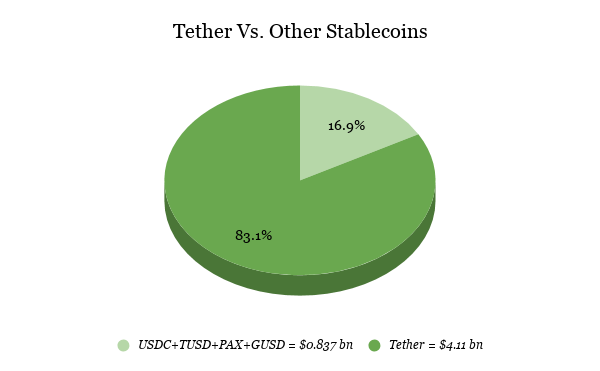 How Stable is USDt?

Theoretically, USDt should hold the peg during times of duress like November 2018, when Bitcoin dropped by a massive ~50% in over a month. However, practically, the price moves away from the peg more often than expected. A measure of this would determine how reliable and hence, how stable, a stablecoin is.

A 14-day rolling average of USDt’s price over the course of 2019 smooths-out the events when the peg was broken. Since the start of 2019, Tether’s peg was significantly broken approximately 4 to 6 times. However, the price volatility reduced towards the end of 2019, as seen below. 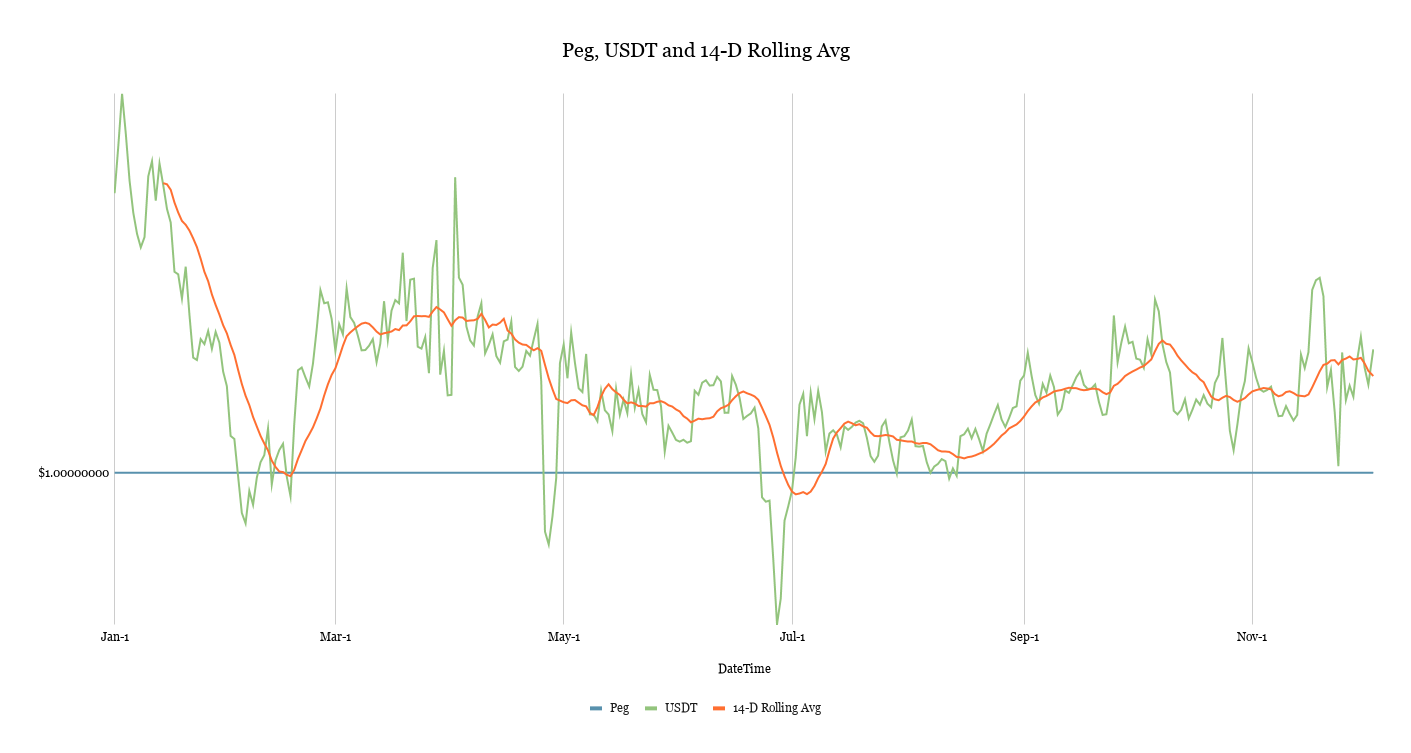 This highlights an unstable peg, seen more often with other stablecoins as well. However, this deviation from the peg is not always bad; in some cases, it could be used to one’s advantage.

The main function of Tether is to hold the peg. In a case where USDt deviates below the peg, this would make holders less profitable during times of recession or other market events. However, at times, the rise in peg is an added bonus for traders.

Speaking to AMBCrypto, Adam Back, Co-founder and CEO of Blockstream, stated,

“Sometimes time preference pulls tether over par unrelated to risk perception… Tether wire in/out fees plays a part also. It can maintain a disparity based on risk perception or demand for longer if the difference is less than the fee structure to arbitrage it out.”

Paolo Ardoino spoke about Tether’s dominance in the stablecoin industry. He said,

With over 4 billion USDt circulating in the cryptocurrency market, it is hard for other stablecoins to even compete with Tether. Even with all the allegations, rumors, and lawsuits against Tether and Bitfinex, the company seems to be resilient and is growing steadily. For now, the stablecoin USDt is untouched and will remain that way. Although USDt’s competitors, GUSD, TUSD, USDC, and others, are relatively more transparent and regulated, people still prefer USDt.

Could it be due to the fact that it is the oldest and the go-to stablecoin for most?

Or perhaps Tether not being transparent and regulated is the reason why people go with USDt?

It could be a combination of both.

To the question at hand, No. USDt has not peaked.

All-in-all, Tether has managed to shoo away most of the rumors and has come out strong. Touching on an important development for the next year, Ardoino added,

“We plan to issue Tether Gold, either between the end of this year and beginning of January 2020.”