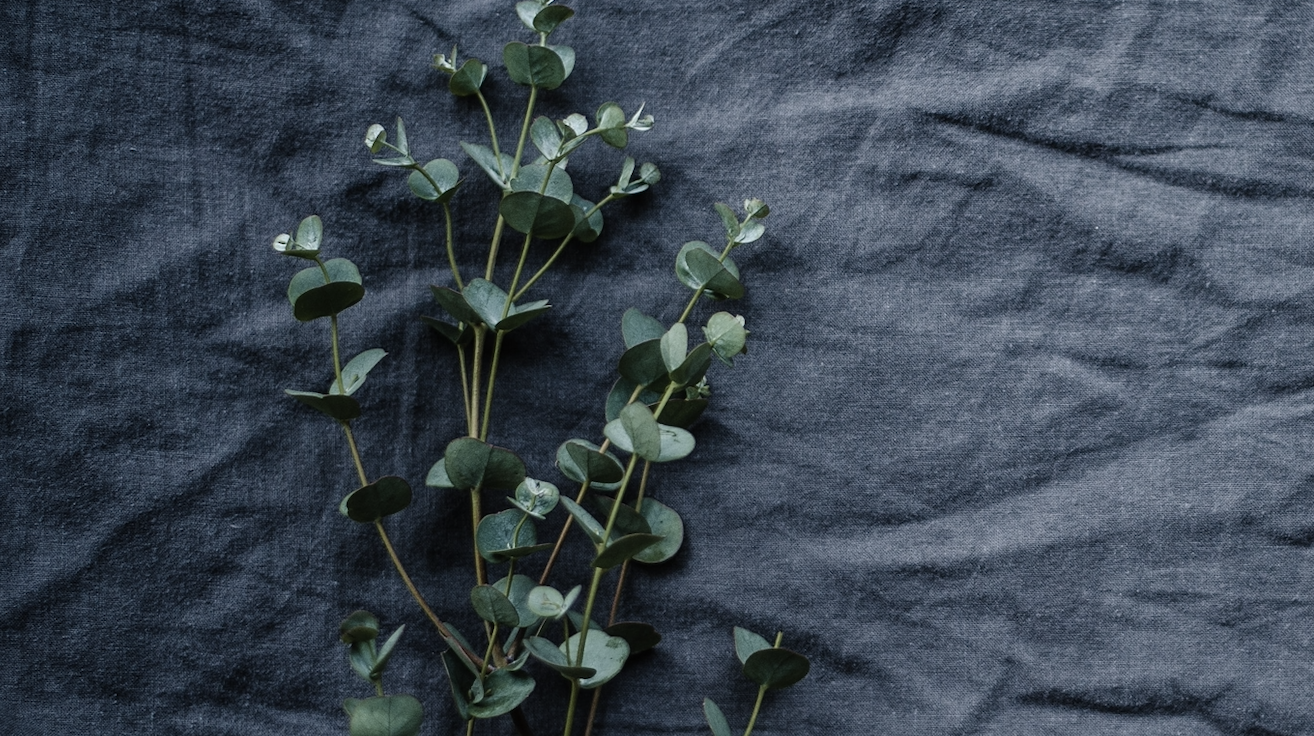 The first thing people unfamiliar with cryptocurrencies think of when they hear ‘Bitcoin‘ or ‘crypto’ is that it is a risky investment with a huge upside. ‘Go big or go home’ resonates well with this sector mainly due to its massive inherent volatility. The ‘risky’ side of crypto can be explained in two parts: the first being an extension of the volatile nature of cryptocurrencies, which causes the price to sway to extremes. The second, however, relates to regulations or lack thereof, causing widespread scams and hacks.

The lack of regulation is the main reason why there aren’t big names in the industry. It is also the reason for exchange hacks, which have cost the ecosystem in billions. In 2019 alone hackers managed to siphon more than $300 million with more than 10 hacks. In 2018, the total hacks were under 10, however, the hacked funds amounted up to a whopping $800 million.

Over the years, the number of hacks is increasing, while some exchanges manage to repay its users, others can’t, they go bankrupt. Quadriga’s errant downfall was a wake-up call to the ecosystem as a whole to get things under control. To control the security breaches? Yes, but more importantly, to control the outcome of how things play out after a breach.

According to Group-IB’s research, 59% of the examined cryptocurrency projects died in case of a successful cyberattack, while around 60% of the vanished companies never refunded their users. Hence, there is a dire need for a method to compensate users and help affected exchanges to survive, which was made clear by Group-IB’s Head of R&D, Aleksandr Lazarenko in an email conversation with AMBCrypto.

“So if something bad happens with the crypto exchange, cryptocurrency insurance guarantees some kind of refund for its users. In addition, I believe, the insurance of cryptocurrency exchanges is good for the entire industry, since it increases the level of trust in crypto investments and leads to higher caps and more investments into the field as a result.”

Insuring cryptocurrencies and the exchanges have begun, however, there isn’t necessarily an arms race. Moreover, there are reports that suggest that crypto-insurance is an untapped industry, yet none of the companies are exactly going out there; they are being cautious.

As discussed in the previous article, there is a desperate need for insurance, yet the two ecosystems haven’t overlapped entirely. This is mainly due to the challenges the new ecosystem provides. It was outlined perfectly by James Putra, the Director of Strategy at Tradestation Crypto in a conversation with AMBCrypto.

“When you’re taking people from traditional financial services and now giving them this new asset which is very fluid in some of its definitions, it becomes hard for them to wrap their heads around.”

Aleksandr Lazarenko added that insuring cryptocurrencies varies with each case and that “legislation” and a “universal legal definition” would help the whole of the crypto ecosystem. He added:

“Serious institutional players, backed by wealthy customers, are just starting joining the game, which is most probably to liken this industry to other traditional financial markets and increase the insurance benefits.”

The traditional world of finance insures cryptocurrency exchanges; in fact, the top exchanges of the industry, Coinbase, Binance, Gemini, all have insurances.

Lloyd’s of London partnered with Coinbase in 2018 to provide a $255 million policy. Coinbase claimed in an insurance document that it maintains “commercial criminal insurance in an aggregate amount that is greater than the value of digital currency” it holds in hot storage. This is different from Binance, as the company is protected by something called “SAFU” funds, which is by the exchange but for the users and the exchange as well. During the recent hack, the exchange confirmed that they would reimburse the affected users form this fund.

Insurances vary, some insure the company assets, some hot/cold wallets, and some exchanges insure individual user balance. What’s common is that insurance, when conditions are fulfilled, covers the lost funds with fiat. Very rarely does an exchange reimburse the lost cryptocurrency.

Is this a good thing? Probably. The insurance sector for crypto is said to be an untapped one, rich with resources, waiting to be exploited.

So, should the insurance companies of the traditional world take up this challenge? It’s complicated, logically, it makes sense to insure cryptocurrencies. However, the philosophy behind the insurance can wrong the ethos on which Bitcoin was built.

An abomination to avoid – Insuring Crypto with fiat

Cypherpunk’s ideology and their work was a precursor to Bitcoin. Cypherpunks sought to establish a currency, free from the clutches of the government’s control. Something that would be accepted unanimously by the people and established as a global coin. A global coin with the properties of sound money – hard cap, store of value, medium of exchange, unit of account. Although Bitcoin is lacking strength in some categories, it embodies these ideas.

To most insured exchanges or users, ‘getting their money back’ is the end of the story after a security breach. However, replacing cryptocurrency with fiat is the worst thing one can do to the notional health of cryptocurrencies. When an exchange gets hacked and funds are stolen, the exchange, will either accept the losses or let it go. However, if there is insurance, it will be claimed in USD – a fiat currency with no supply cap.

As for Bitcoin, there will only ever be 21 million BTC and a huge percentage of these are already lost, forever. They cannot be claimed, recovered, or minted. The fate of hacked coins is also similar to the lost coins. Hence, when affected users are compensated with fiat this will reduce the supply of the cryptocurrency. 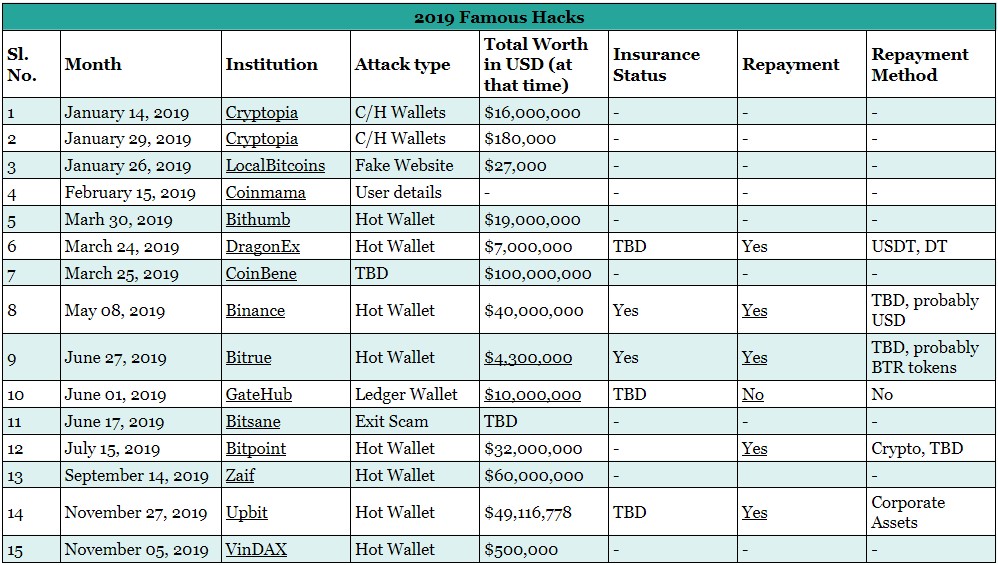 As seen in the chart, hackers have notoriously increased their activity in the last year. Out of the 15 breaches, only 5 exchanges have announced that there will be reimbursement of the hacked funds. Out of the 5, most exchanges usually compensate with exchange tokens, which is better than using fiat.

Most reputed exchanges, like Binance, Coinbase, etc, have insurance to cover them. Even with fiat insurance, there is a lack of players willing to insure cryptocurrencies due to its nature. Some exchanges like SFOX are FDIC insured for $250,000 per individual, although, a small amount, it is a start and more exchanges are starting to take this route.

7,000 BTC stolen by hackers from Binance is now effectively taken out of the circulating supply of Bitcoin. Hence there will be fewer BTC to go around. Although this increases the scarcity of Bitcoin in the short-term, it will be a hindrance to Bitcoin’s growth in the long term. If Bitcoin were to ever capture even a small percentage of the global wealth or gold’s market cap, there will not be enough BTC. The hard cap of Bitcoin, which made it a store of value will eventually hurt it.

In addition, if Bitcoin has to increase and become a global coin, it needs to sever the relation with fiat. Instead of Bitcoin being represented in terms of USD, USD should be represented in terms of ‘BTC‘ or perhaps in ‘Sats’. Either way, insuring cryptocurrencies with fiat, which can be printed whenever the government feels like is counterproductive to the cryptocurrency ecosystem.