These are some of the most frequently asked questions. Almost all of the dormant Bitcoins are assumed to be lost, especially, those that haven’t moved in over 5 years or so. However, there isn’t a rule or a clear-cut demarcation to segregate these ‘lost coins’.

Why waste Bitcoins when it has a limited supply? Why can’t the code be changed to recover them? Wouldn’t everybody have more Bitcoin to gain?

These thoughts are natural and might seem harmless, however, they aren’t. Recovering lost Bitcoins is like unleashing the Pandora’s box. It could destabilize the whole community and more importantly, the faith and trust in Bitcoin.

Does that mean lost Bitcoins are to be left alone? So is there truly nothing that can be done with the lost Bitcoins?

Lost Bitcoins and their destiny

Bitcoin is a new form of money that is, in terms of economics, sound, hard, secure, and free from the shackles of government. The limited supply of Bitcoin is one of the many characteristics that makes it desirable, at least for those who are bullish on the longterm prospects of it. Adding value to this limited supply is, you guessed it, the lost Bitcoins.

So, should one really mess with the lost BTCs and perhaps recover it? If so, can and should we do it? Or, can we do it?

This article takes a jab at the lost BTC, its value, and relationship with the Bitcoin network.

People have lost Bitcoins, all throughout BTC’s short life span and they still do. In hindsight, it looks quite foolish to lose a few thousand Bitcoins. However, to people back then, Bitcoin was nothing but a new buzz word in a very niche part of the Internet. To be quite honest, nobody believed that it would succeed, until it did. Even the government looked the other way until Bitcoin started to become an actual threat.

Hence it shouldn’t come as a surprise losing a hard drive containing 7,500 BTCs or throwing away iMac containing 50 BTC. There is also another notable person, Laszlo Hanyecz, who bought pizzas for 10,000 BTC.

Moreover, losing cryptocurrencies is a problem plaguing all cryptocurrencies alike. About 12,000+ ETH [Ethereum] has been lost in 2018 according to ConsenSys media due to typos. As mentioned before, it is the price one has to pay for decentralization and monetary sovereignty. 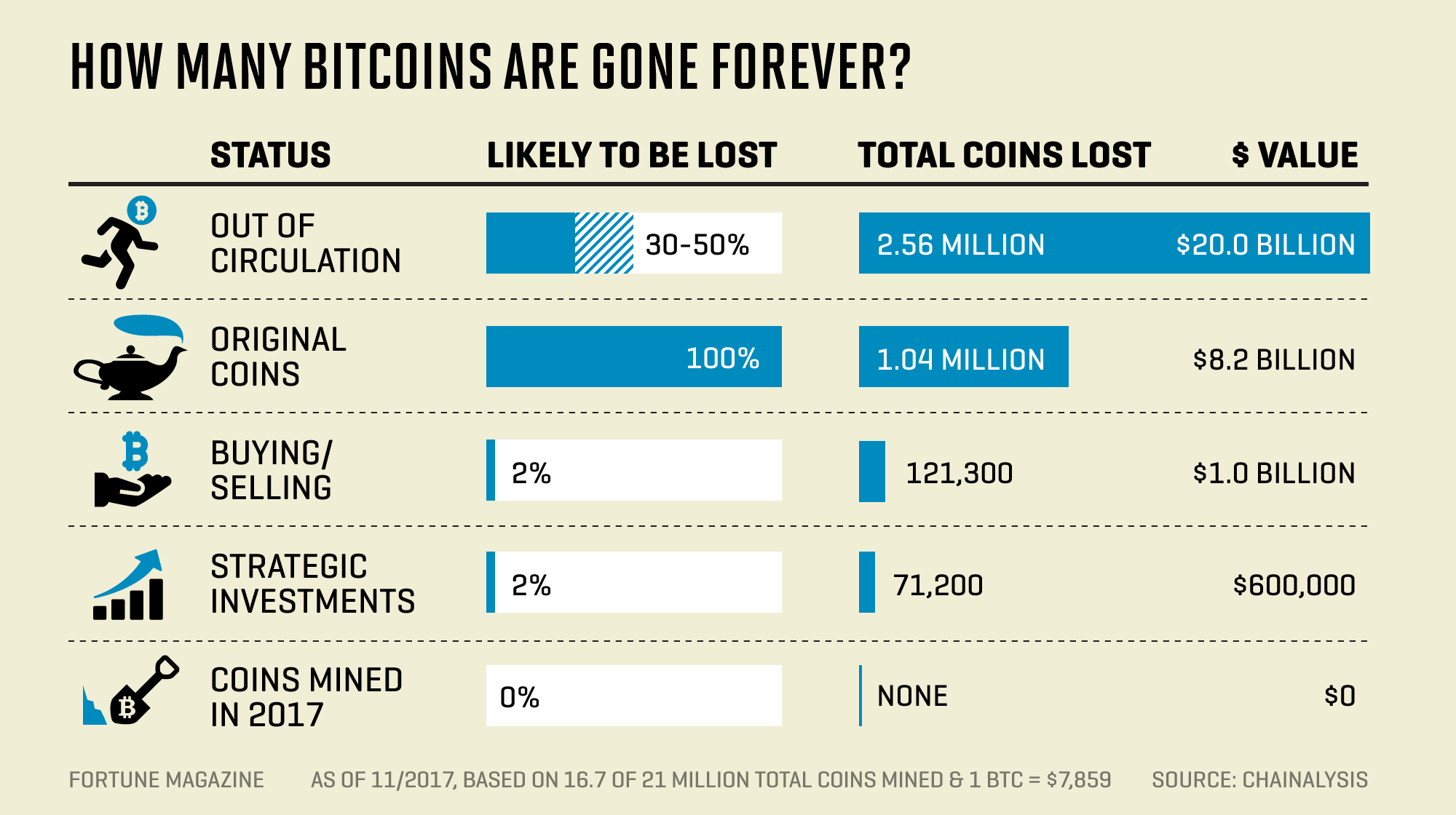 Accepting decentralization and monetary sovereignty has its own perks and downsides. You can be pseudonymous but your funds are your responsibility. It is the price of decentralization.

The most important question that awaits, “Can and should we recover the lost Bitcoins?”

Speaking with AMBCrypto, Bobby Ong, the co-founder and CEO of CoinGecko, stated:

“Lost bitcoin should remain lost forever… Satoshi’s coins should be left unclaimed forever. It would cause a lot of worry if someone attempts to try to recover them and will most likely cause a split in the chain if somebody attempted this.”

Bob Summerwill, the executive director at ETC Cooperative, had similar thoughts. Summerwill told AMBCrypto that recovering lost Bitcoins was like trying to hire a crew to recover lost gold in the ocean. He added that the cost of recovery would be higher than its value.

“But altering the code is a BAD idea. It is a moral hazard. A slippery slope. The immutability and social enforcement of that expectation is more important than the personal pain of any individual about their lost riches. It is what makes BTC and ETC hard money.”

A Compromise with Decentralization?

Bitcoin is a code, and code can be changed. Right? Well, yes and no.

Bitcoin’s code is bound by rules of consensus. The code cannot be changed without reaching consensus from the community, developers, and miners. Without consensus, the changes could lead to forks.

However, with increasing demand for BTC and constrained supply, perhaps, the only need to recover lost Bitcoins would be to stabilize its supply to 21 million.

So, why cannot there be a BIP [Bitcoin Improvement Proposals]?

Here are a few reasons that would entertain the outlandish idea of recovering lost Bitcoins.

On a Reddit thread discussing the same aspect about lost coins, Pieter Wuille mentioned that trying to recover and redistribute lost coins would be “beyond foolish”.

“… what you’re suggesting [recovering lost Bitcoins] is so fundamentally different from how Bitcoin has always operated (some will call it “theft”) and what people thought they bought into, that I expect enormous outrage over it.”

At this point, there’d definitely be a fork of Bitcoin’s main chain.

As discussed by Andreas Antonopaolous in his video, there is a hypothetical scenario where lost bitcoins can be accessed but in the distant future; when SHA256 breaks apart due to rapid technological advancements.

“The cryptographic keys and algorithms used in Bitcoin do not last forever [anyway]. At some point, the elliptic curve digital signature algorithm (ECDSA) and SHA-256 will be obsolete. Maybe in ten or twenty years; certainly less than fifty years. They will no longer be strong enough to protect coins that haven’t been switched over to… a stronger cryptographic algorithm.”

Moreover, Antonopoulos added that the Bitcoin code needs to be recycled from time-to-time into better cryptographic algorithms; people with enough computing power should/could break keys and retrieve the lost coins. He also added that recovered BTC could act as ‘bounty’ for dedicating their resources.

“Essentially, it creates a bounty for testing the system, and rewards people who [exercise their skills].”

However, Wuille had a different opinion on recovering lost Bitcoins [using brute force]. He added that ECDSA or secp256k1 would not be obsolete any time soon and even if it did, there would be different ways to maintain the existing key system; but permitting the use of brute force to tractably recover coins was “beyond foolish”.

Depending on the timeline present to change the key system, there would be solutions, simple or complex, but none leading to the recovery of lost coins, and even if it did,

“… that would effectively be giving millions of BTC to the one with the first machine/algorithm fast enough to break it. The mere idea of that possibility would completely undermine market confidence, as it could lead to millions dumped.”

Apart from breaking decentralization, recovering lost Bitcoins, now or in the future, is a bad idea. It would cause contention in the community. There’d be massive rants opposing why this would be a bad idea and cause a lot of political arguments.

Economic factor will also play a major role in deciding if the lost coins should be accessed or not. Certainly, people holding Bitcoins wouldn’t want the lost Bitcoins to be brought into circulation. The simple reason for opposing this would be – inflation.

According to Fortune’s article dated November 25, 2017, about 4 million Bitcoins have been lost. Although the article factors Satoshi’s Bitcoins, which aren’t technically, lost, the number can be considered to gauge the inflation pressure.

Jamesson Lopp’s recent article addresses the issue of lost coins among many others.

“Demurrage (deletion or reassignment of coins judged to be “lost” or “unused”). It’s not possible to objectively say that the private key to a UTXO has been lost simply because it has not been spent after a certain period of time. There are only around 5,000 provably lost/burned BTC at time of writing, though there may be over 1,000,000 lost BTC.”

Barging into Satoshi’s Wallet? Or a Better Solution

There are other ways to get around Bitcoin’s increasing demand and reducing supply due to lost coins. The price of Bitcoin is set to reach highs higher than its ATH of ~$20,000. So, as Bitcoin gets more pricey, it is better to have smaller denominations that accurately represent the value of Bitcoin in relation to the U.S. dollar. Moreover, the smaller denomination provides granularity to Bitcoin’s wealth.

The best and the widely used/accepted denomination of Bitcoin is ‘satoshi’. 1 Bitcoin comprises of 100 million satoshi or sats. Other denominations of Bitcoin as described by bitcoin.org are seen in the table below. 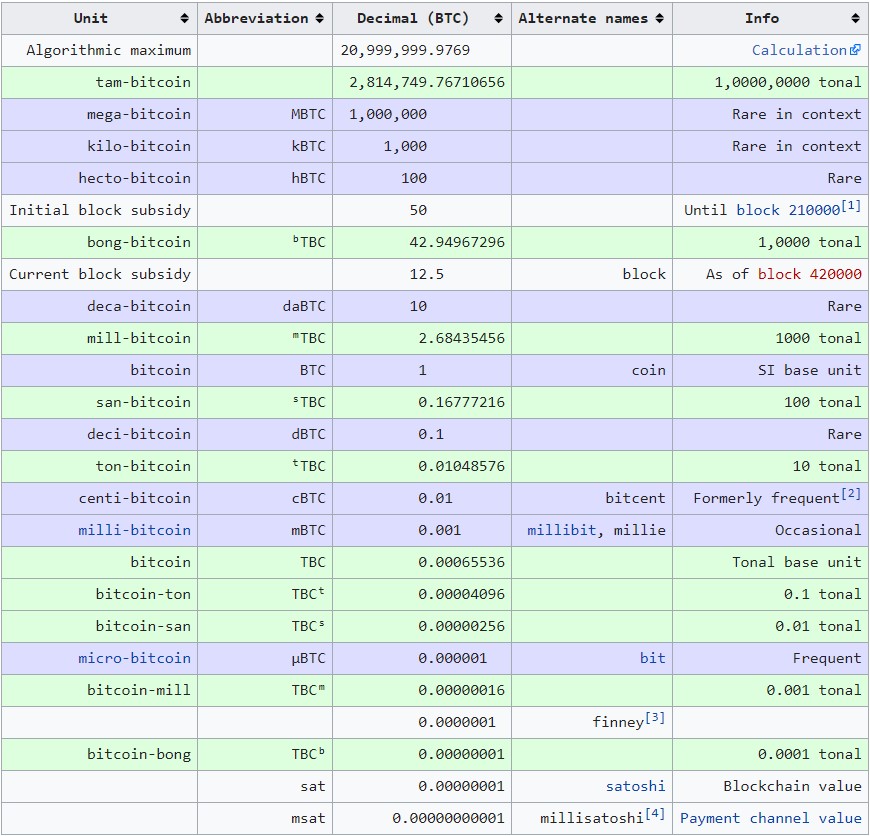 Davinci Jeremie, a Bitcoin software engineer who spoke to AMBCrypto about lost Bitcoins opined that lost Bitcoins help increase the value of the bitcoins in existence but only by a negligible amount.

“Lost bitcoins are like sunken treasure at different depths of the ocean… Bitcoin lost with a password-encrypted private key is a shallow level and can be currently retrieved with lots and lots of effort. Bitcoin lost with no private key but reused bitcoin address is deep level that one-day technology will be able to retrieve it. Bitcoin lost with no private key and stored in an address that has never been used and not HD key is at depths no probe can even go to see we just know its there. At each salvage level, a lot of money and effort will be spent to retrieve them and those that do should get the reward for doing so.”

Even Bob Summerwill concluded that the lost Bitcoins will yield “deflation to holders who have been prudent and not lost their money”. He also compared recovering lost Bitcoins to an earlier EIP that proposed the recovery of trapped funds following the Parity wallet bug in 2017.

Related Topics:featuredLost Bitcoin
Up Next