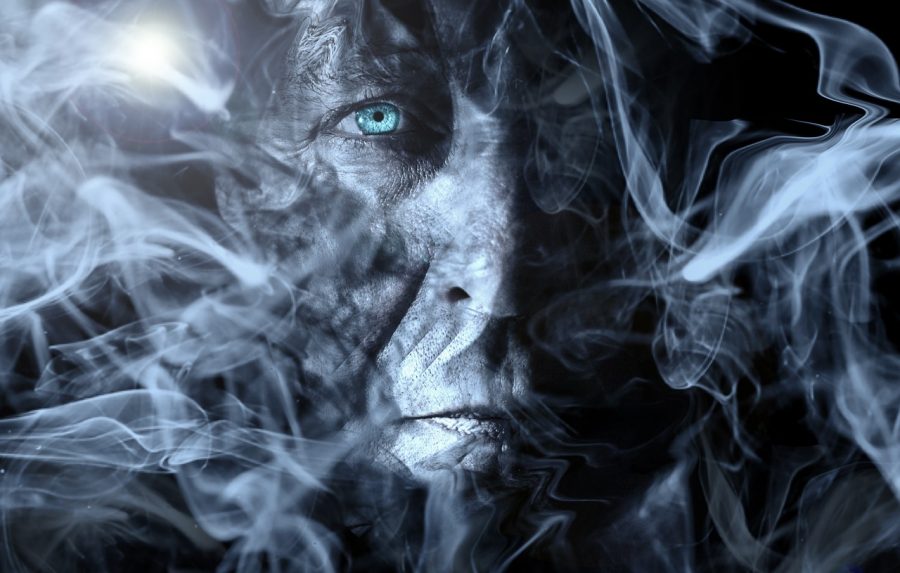 The entire cryptocurrency market has been hit by a huge bearish wave, one that has wiped out all the gains from not only the Bitcoin market, but the altcoin market as well. When BTC touched the $3k level today, the confidence of the market was shaken and many of the market’s traders were taken in with fear. The fall put many investors into a loss, but the Net Unrealized Profit/Loss [NUPL] provided a clearer picture in determining the state of profit or loss for the Bitcoin network as a whole. 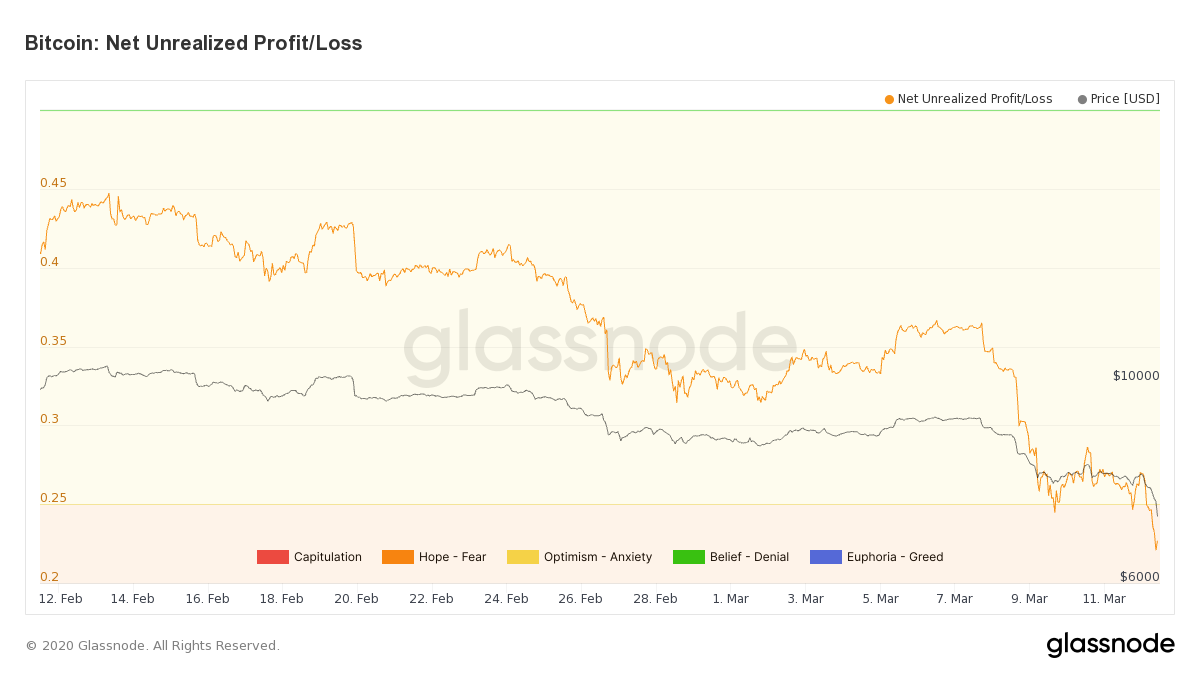 Glassnode defines NUPL as the difference represented between unrealized profit and unrealized loss to determine the network’s state of profit or loss. It explained that a value above zero indicated a state of net profit, thereby stating that the Bitcoin network, at press time, was still in a state of profit, despite the fact that the metric’s value was as low as ~0.22.

That being said, today’s market crash took the value down into the orange or  “fear” zone. 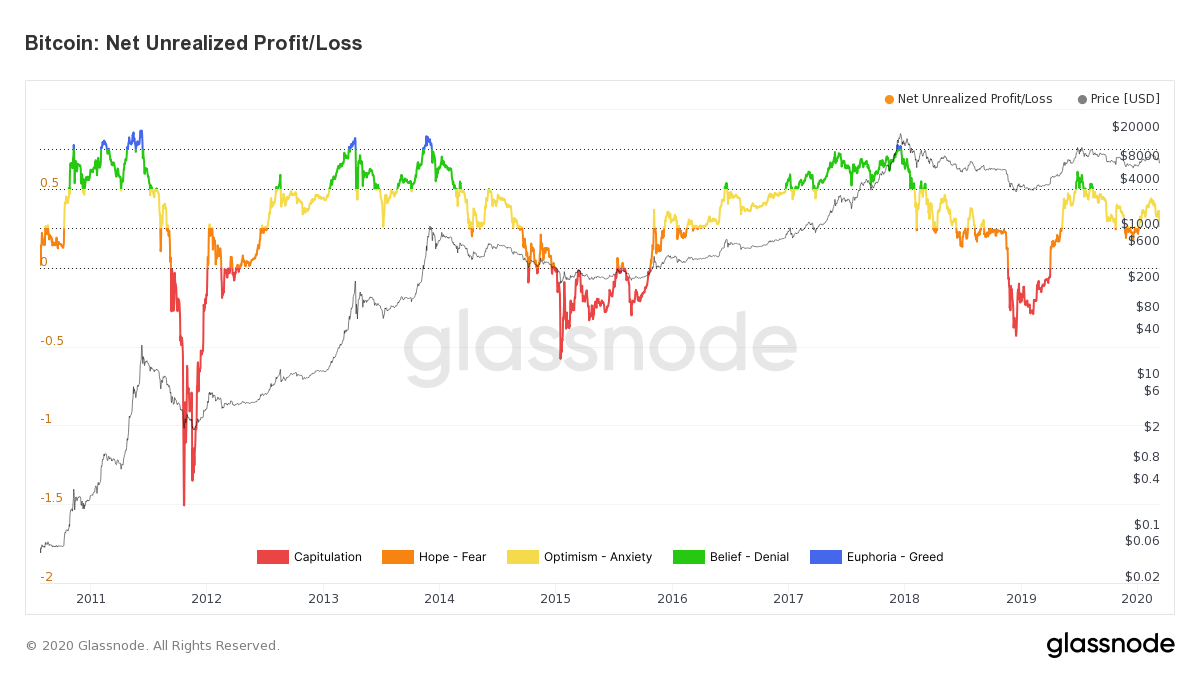 “Historically, when this happens, NUPL usually drops all the way into the red “Capitulation” zone (net loss) before recovering to profitable levels.”

Glassnode researchers had predicted more losses if the value did not recover. However, looking at the charts for 12 and 13 March, it is evident that the price of Bitcoin and most coins in the market had recorded massive losses.

Bitcoin, at 2300 UTC on 12 March, started to collapse from $5,798.25, falling by 31% within three hours. The losses seeped into 13 March, with the lowest point being recorded at $4,007.14. In fact, on some exchanges, it even went down to the $3.8k level. Due to this, the Fear and Greed Index moved towards the red end of the meter. The metric, reading 10 on the meter, highlighted a sentiment of extreme fear in the crypto-market. 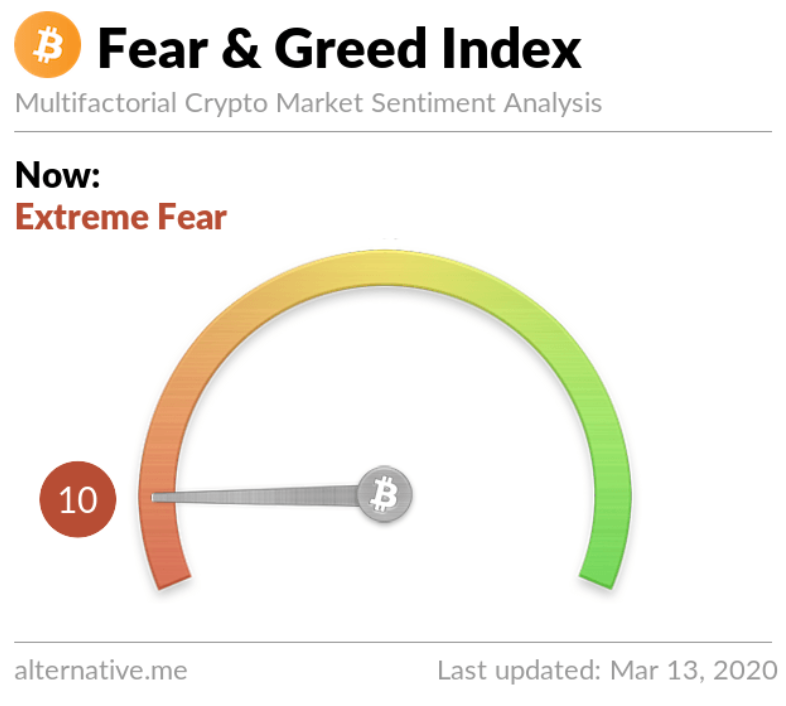 The indicator had been in the gradient of red and green from the end of February, regularly indicating a value od under 40. However, as the price fell, panic caught on and the market appeared extremely fearful, at press time.

Related Topics:Fear and Greed Index
Up Next