With over a week remaining until the anticipated event, people are voicing varied opinions on how the third halving will be. An interesting bit is how Bitcoin is undergoing “quantitative hardening” while the whole world is on quantitative easing.

Bitcoin’s halving is in a way its monetary policy, and unlike fiat, it tightens the supply, thus creating deflation and existing supply. Since the first halving, the hashrate, and difficulty has been increasing at a rapid rate. This is mainly due to the development of mining equipment technology and fierce competition. With the halving approaching, Bitcoin’s hashrate has been climbing, showing the demand for Bitcoin mining.

Due to the supply shock and the anticipation of the halving, Bitcoin’s price tends to appreciate before the halving. However, after halving, the price rallies to new highs, and the first two halvings are proof. Token Daily’s issue 35, detailed on how the third halving might affect the price by drawing references to prior halvings.

In reference to the price action so far, Token Daily stated:

“Bitcoin getting crushed at halving has so far been the rule, not the exception. Analyzing price changes the past two halvings on Nov 28th, 2012 and July, 9th 2016 offer a better picture of what to expect next week”

Bitcoin’s price-performance becomes increasingly better as the months pass by after the halving due to the re-introduction of miners and the adjustment of difficulty. After the halving, there are massive changes in hashrate and appropriate difficulty adjustments, hence, miners mining with break-even price will be affected the most and some might even have to shut off the farms. 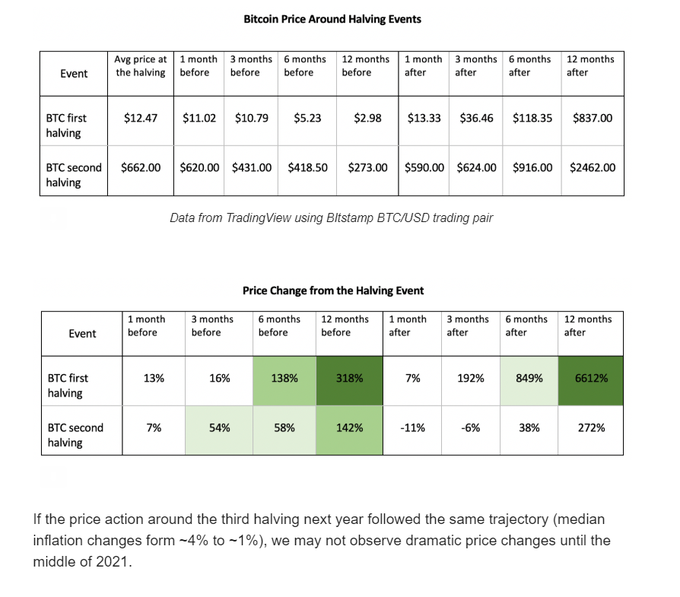