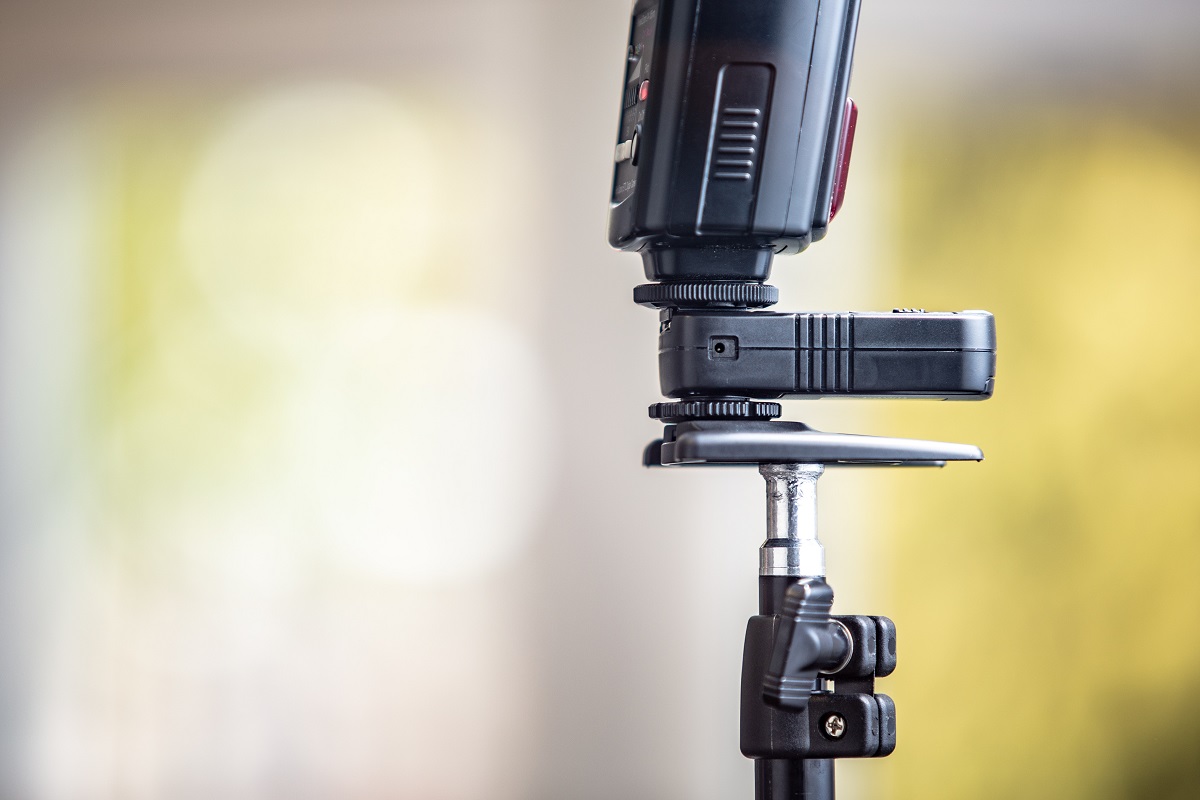 Bitcoin [BTC] is called the king coin for a reason. Even after its significant price drop on 12 March, the top coin continued to dominate other altcoins.  In fact, according to the Head of Product at Messari, Qiao Wang, more traders would dump their altcoin investments and turn to Bitcoin. This, he asserted, would result in an increase in Bitcoin’s dominance, a figure that might go up to 90 percent by the end of the ongoing financial crisis. At the time of writing, this dominance was already worth 65.61% of the total market cap. 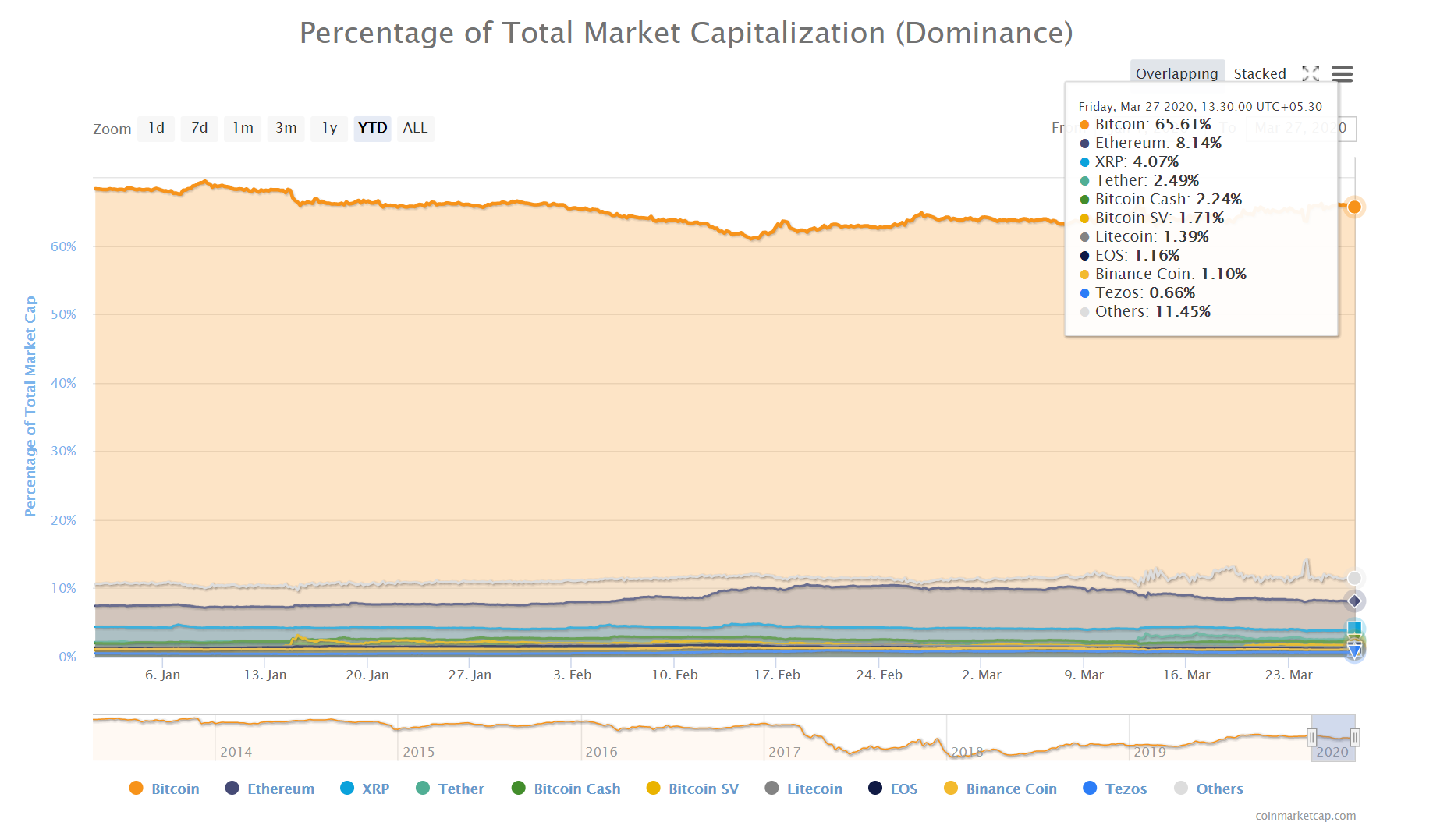 On a recent podcast, Nicholas Merten, the founder of DataDash, shared his thoughts on the recent sell-off and the major causes behind it. Noting that COVID-19 was just a trigger and not the main cause of the market drop, he noted that a lack of spot liquidity and various Ponzi schemes might have had a larger role to play.

“If you have too much liquidity on derivatives platforms versus spot exchanges, you get an issue where the spot exchanges are tracking the price on the underlying spot market pushing price downwards.”

Expanding on the Plus Token Ponzi scheme where 1% of the entire Bitcoin supply and hundreds of millions of dollars worth of Ethereum had been stolen, he said,

“And basically as they were aiming to exit out of these positions in these cryptocurrencies, they’d been waiting months to find exchanges where they could sell it and they ended up most likely selling it on spot exchanges. This sparked a sell-side effect and prices just kept going down, where orders continuously were fulfilled on the order book driving prices down lower.” 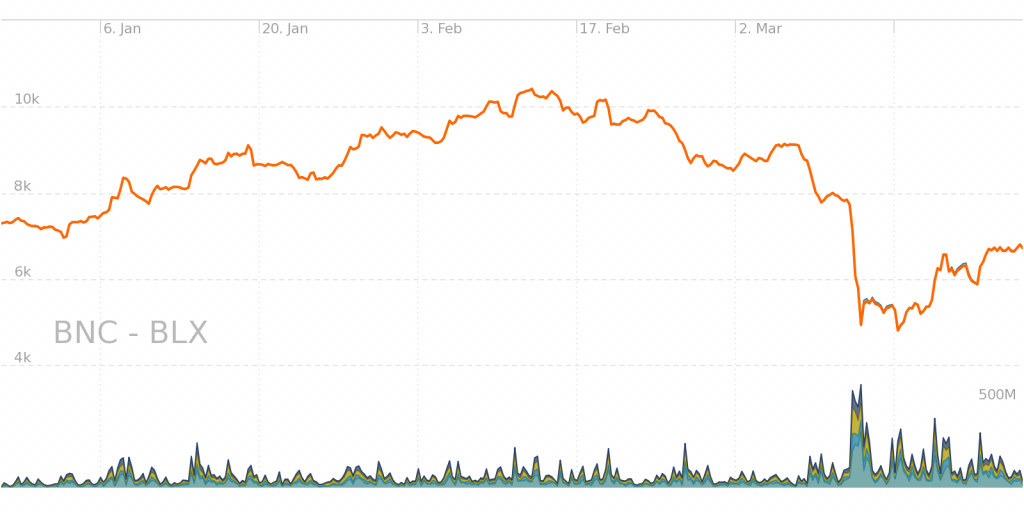 It is a fact that a lack of liquidity could reflect a fall in asset prices, a hypothesis that holds good in Bitcoin’s case. BTC’s prospects temporarily got bad after ‘Black Thursday,’ something that can be observed in the attached chart. Bitcoin’s liquid index fell from USD 7853.86 to USD 4931.29 in just a day’s time, and it has been around the same level for some time now. At press time, BLX was at USD 6708.37.

Merten noted that Bitcoin‘s price could be held down by scammers seeking to liquidate at least $2 billion worth of cryptocurrency belonging to one of the largest ever Ponzi schemes, PlusToken.

Blockchain firm Chainalysis, however, ruled out PlusToken as the culprit. “We don’t believe PlusToken liquidations are responsible for Bitcoin’s price drop. While Bitcoin did move from PlusToken addresses over the weekend, very little has gone to exchanges,” it noted.

The graph that Chainalysis put out shows how many Bitcoin Plus Tokens had been sent to exchanges on a daily basis in February. PlusToken had sent a total of roughly 23,000 BTC to exchanges, most of it well before the price drop that began on Sunday, 8 March. The firm thus concluded that PlusToken liquidations were likely not the cause of the price drop.

Related Topics:Bitcoin sell-offfeaturedliquidity
Up Next

Ethereum 2.0 transition will be an ‘evolution of platforms’

Bitcoin’s Liquid leaves the ‘Lightning’ behind with higher BTC volume