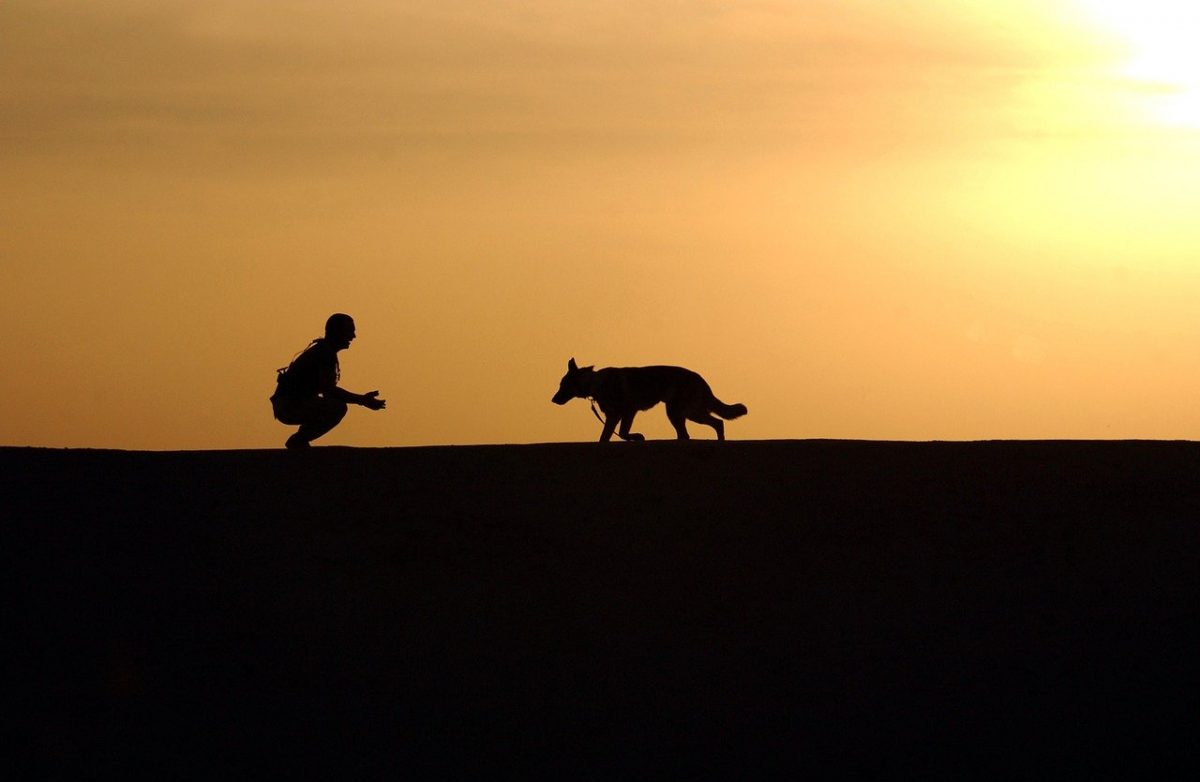 With Bitcoin precariously trading below $7,000, a large expiry could threaten another sell-off, and by the looks of it, a sell-off is on the horizon. The second-largest expiry of Bitcoin options contracts is scheduled for 24 April, and with the price on a knife’s edge, and the halving 20 days away, the next few days could be pivotal for the cryptocurrency’s 2020 trajectory.

According to data from skew markets, 27,000 Bitcoin Options contracts, by open and active positions, will expire on 24 April, the second-largest single-day expiry all year. With traders expecting a month and a half for the price effects of the halving to play out, the largest expiry is on 26 June, with 33,100 BTC worth contracts by open interest on the shelf. 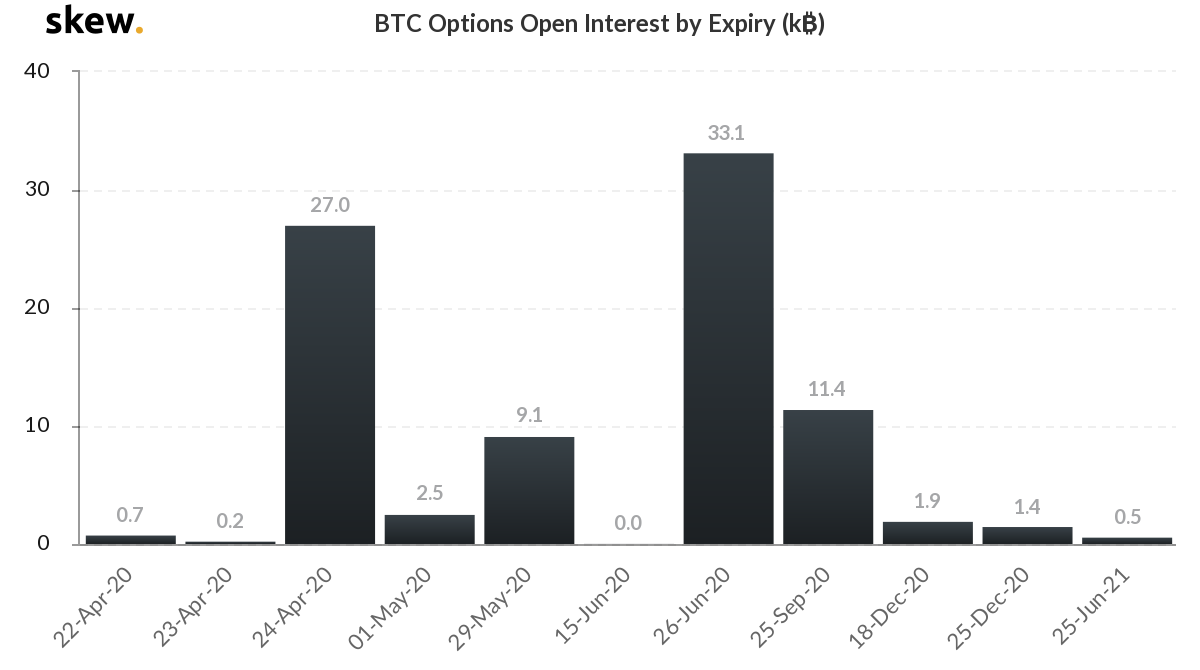 Given the large number of contracts, coupled with the relatively stable movement of the cryptocurrency in the past week, and the imminent periodic supply shift, the options on these derivative contracts bears introspection. Across expiry prices [not periods] it would seem traders are more realistic, with the price point of $7,000 carrying the highest contracts traded at 7.9 percent of the total contracts. The current open interest for the Bitcoin Options market is below $600 million, dominated by Deribit and OKEx. 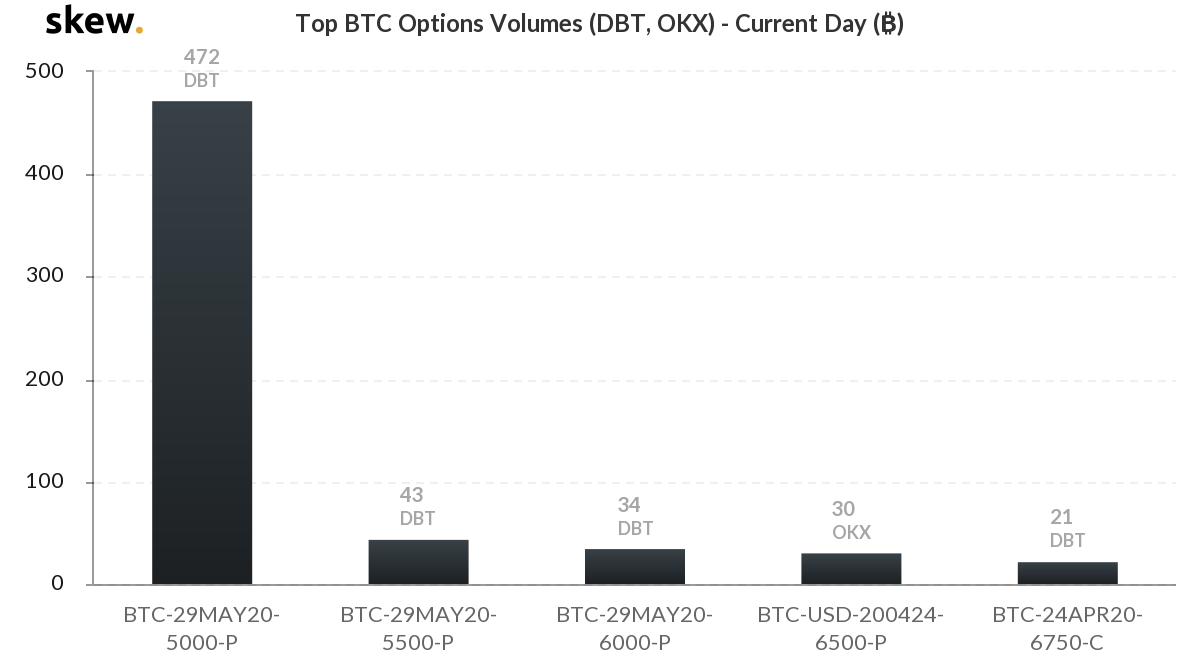 The top traded put contract, has a strike price of $5,000 with an expiry of 29 May, with a whopping 472 contracts traded. The next two contracts also have a 29 May expiry, but with strike prices of $5,500 and $6,000 and volumes of 43 and 34 contracts respectively. Evidently, most traders are expecting a fall in price from now till post the halving to the end of May.

Further, the most immediate contract expiry, on 24 April, has a strike price of $6,500, $350 less than the last traded price of Bitcoin, at press time.

Bitcoin options traders, just a day ago, were divided, and less pessimistic. Three of the five most traded contracts on 21 April were call options with strike prices ranging from $6,750 to $9,000, and the two puts were fairly conservative at $6,875 and $6,250 respectively. Moreover, unlike the contracts traded today, when one contract is attracting the bulk of attention of the market, yesterday’s contracts showed lesser volume spread.

The end of the week and the inevitable expiry has a lot of selling pressure to contend with; how will it cope with the halving around the corner?

Related Topics:Bitcoin optionsDeribitfeaturedPut/Call
Up Next

Ethereum is enjoying high stablecoin issuance, but for how long?