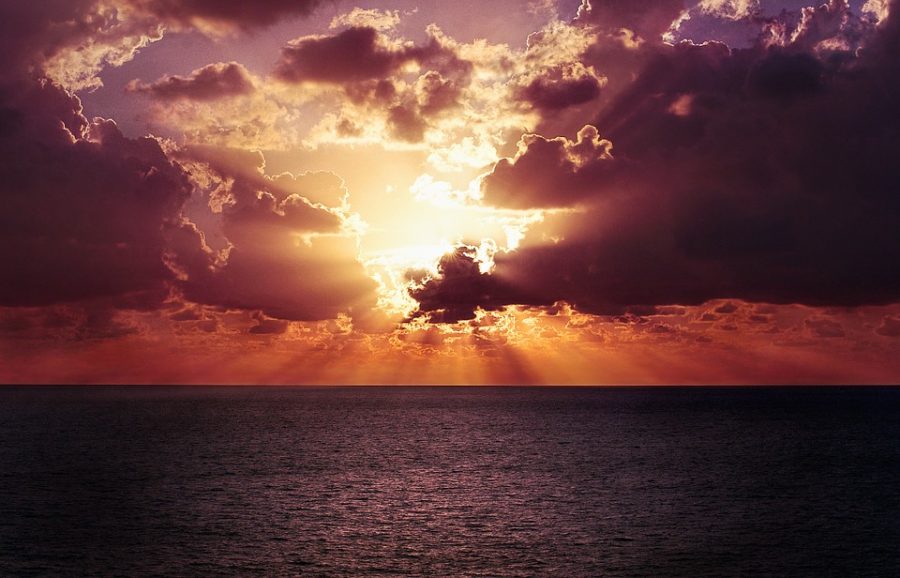 CryptoCompare, a cryptocurrency data provider, launched digital asset exchange review guidelines a while back, a review that ranks exchanges every month. CryptoCompare released its first report in August, revealing the performances of exchanges for the month of July, a month where Binance led the board with a whopping $42.1 billion monthly volume.

The data provider has released another report for the month of August, wherein Binance was seen yet again dominating the crypto to crypto exchange volume space.

Malta-based cryptocurrency exchange, Binance, has recorded an array of developments in its ecosystem. The exchange introduced several features recently, including the launch of lending products, margin trading, and Binance.US, along with the announcement of Venus. The aforementioned developments seemed to have helped Binance retain its position on the top as the exchange recorded a total volume of $28.45 billion in August. However, the total monthly volume of the exchange was down by 41.46% since July. 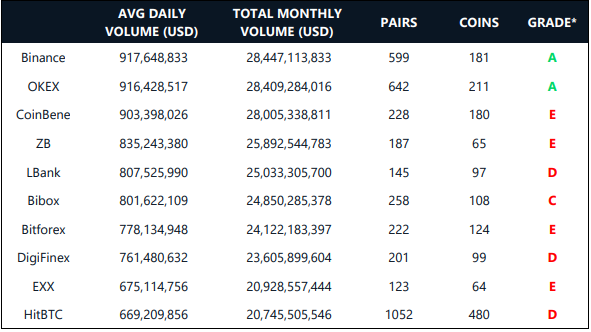 Binance was followed by another Malta-based cryptocurrency exchange, OKEx, as the exchange had a volume of $28.41 billion, which was also down by 38.06% since July. OKEx was recently in the news after the Korean branch of the exchange delisted five privacy coins namely, XMR, DASH, ZEC, ZEN, and SBTC by labeling them “dark coins.”

CoinBene stood third with a total volume of $28.01 billion, which was 28.7% lower than that of its July volume.

The next chart in the report was the “Top 10 Fiat to Crypto Exchanges by Average Daily Volume in August.” According to the chart, Bithumb was on top of the list with a total volume of $18.08 billion for the month of August. The South Korean cryptocurrency exchange recently announced setting up a new committee solely dedicated to the determination of listing cryptocurrencies on the exchange. 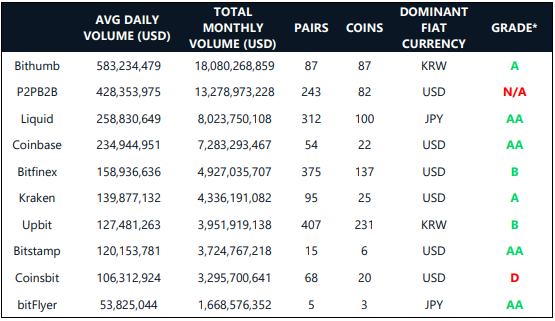 P2PB2B was next on the list with $13.28 billion in volume, with the exchange up by a massive 450.14% since July. The exchange that lists about 82 coins on its platform overtook the popular Coinbase, an exchange that previously stood second on the list. Coinbase was seen lagging behind in the fourth position.

Ethereum 2.0’s first phase is estimated to roll out in early 2020