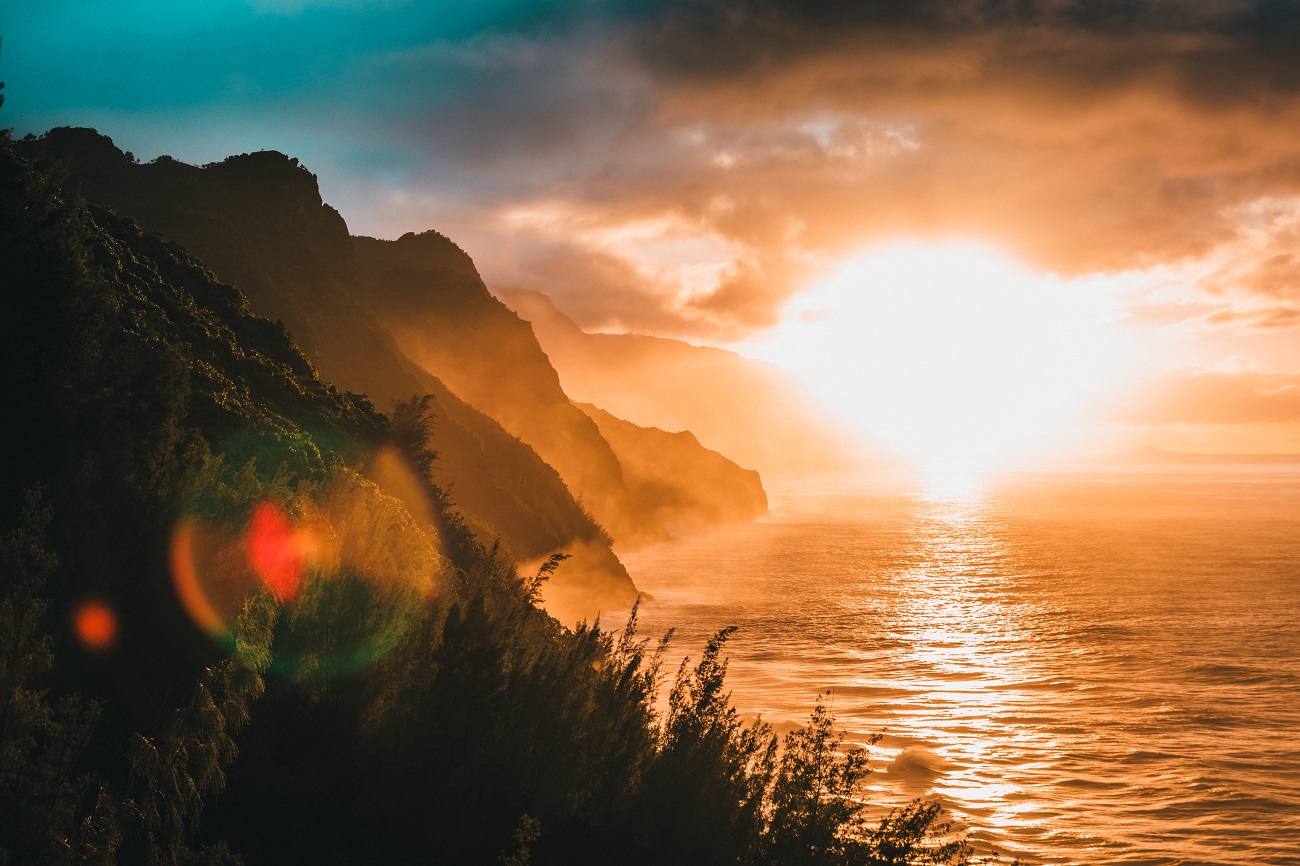 Stablecoins have been the topic of discussion for quite some time now, especially since the start of 2020. Although Coronavirus takes the spotlight, both are not mutually exclusive. The ripples of COVID-19 are being felt in the cryptocurrency ecosystem too. Stablecoins, in particular, have felt the heat. Regardless of pandemic-induced pressures, stablecoins seem to be doing well, increasing in market cap even with the threat of negative interest rates hanging over their head.

Take Tether, for example, the largest stablecoin in the ecosystem – it has managed to grow its market cap by an enormous ~120% in just ~3 months. Other stablecoins have done the same and the attached chart shows their growth over the course of 2019 and 2020. 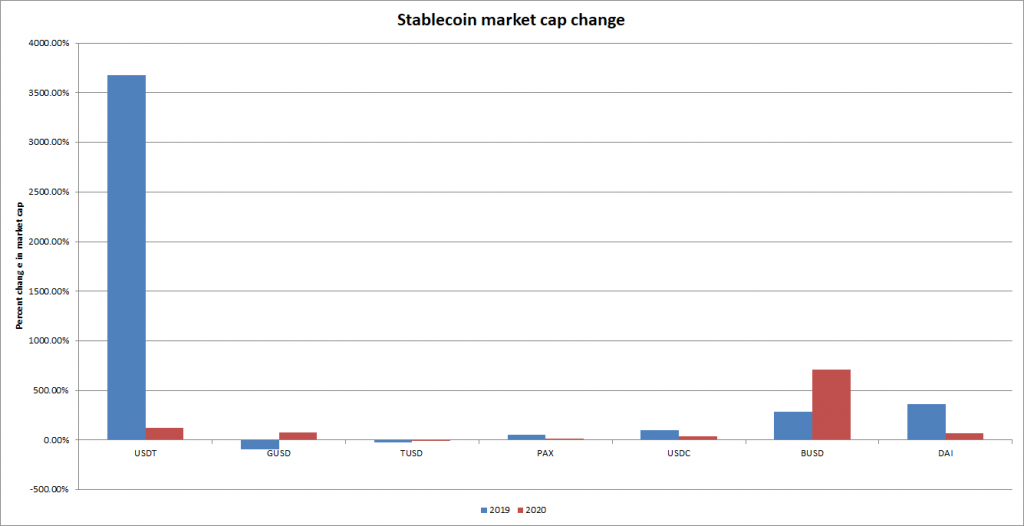 The following chart shows the stablecoin market cap share of each stablecoin and it is clear that USDt enjoys a major share. 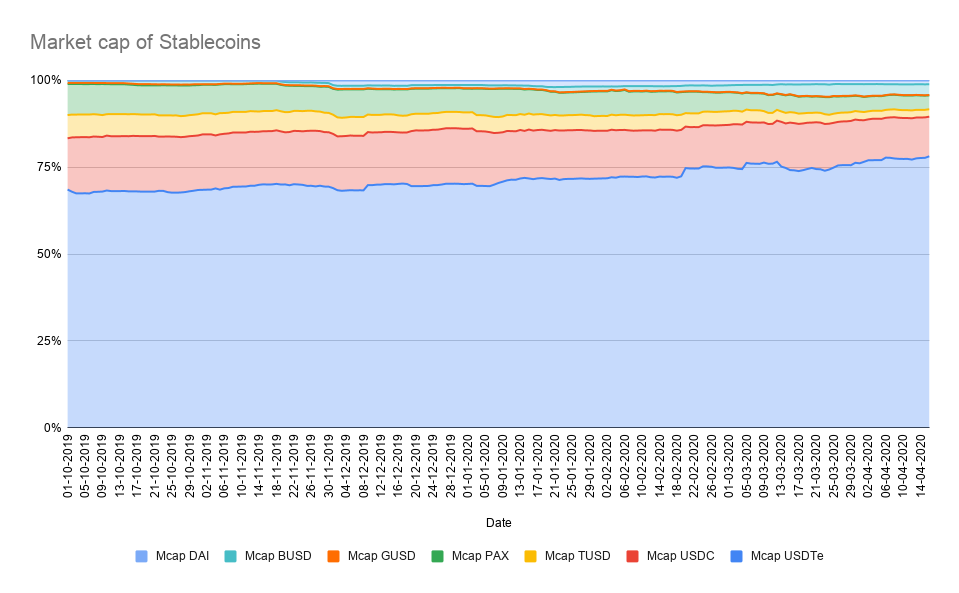 With a lion’s share of the stablecoin ecosystem, Tether has enjoyed a monopoly since most cryptocurrencies are paired with USDt. However, one common factor among all the stablecoins is a stark increase in 2020. Despite the negative interest rate threat, stablecoins are witnessing a demand, per se.

But why? And what is the driver of stablecoin growth in 2020?

Before understanding what’s driving the growth of stablecoins, it is necessary to have a brief understanding of the economies and how they are faring. Due to COVID-19, central banks around the world have dropped interest rates to stimulate spending. However, due to lockdowns, unemployment in the U.S has been soaring.

In fact, the latest numbers show that around 22 million people have filed unemployment claims. Furthermore, the Fed has printed trillions to ease not only the woes of banks and major institutions, but also the people.

As mentioned above, the effects of these have rippled into the cryptocurrency ecosystem.

The main reason why stablecoins are seeing an increase in demand is due to zero interest rates. Investors usually have cash on hand for liquidity; however, most of the capital that can be invested is usually earned in interest, either in the bank or in government bonds, etc. However, with bank and Treasury bill interest rates hitting zero and negative, there wouldn’t be any advantage in holding capital in these investment vehicles.

Stablecoins provide a better offer than traditional investments. Additionally, in light of the fiscal stimulus and inflation, hedging cash in gold or even cryptocurrencies seems more plausible. This is the first reason why stablecoin demand is on the surge, something that explains the surge in their market cap.

Other reasons for an increase in stablecoin demand include,

The growth in stablecoin trading was confirmed by Circle CEO Jeremy Allaire after he pointed out that the Coronavirus crisis had caused an unexpected boost in the stablecoin business of Circle. He stated,

“Over the past several weeks, we have seen explosive interest and growth in USDC. There is clearly a very significant global demand for digital dollars, and the use of digital dollars as a new payment medium… We are getting feedback from Asian market participants that there is more and more demand for USDC from SMEs seeking both the safety and utility of digital dollars”

Since the U.S dollar is the global reserve currency, emerging countries would want investments or influx of the dollar, which is also another reason why dollar-backed stablecoins are the only ones seeing a sharp surge in demand. The currencies of the world’s largest emerging countries, Brazil, Russia, India, and China, have all increased against the U.S dollar. INR has risen by 7.03%, CNY by 1.58%, RUB by 19.76%, and BRL by 30%, since the start of 2020.

Additionally, with the drawbacks of the legacy systems, FX transfer would take forever; hence, using stablecoins would be a viable option. For investors in such countries, holding USD either in digital or stablecoin form would be much better than holding currencies of their country.

This drop in price, coupled with the approaching halving and the demand for Bitcoin, seems to be a key driver in the growing demand for stablecoins.

Central Bank Digital Currencies are all the hype. China, for now, seems to be at the forefront of this race and recent reports suggest that China’s digital currency is in its final phase. Further, South Korea’s CBDC is also a step closer to being launched. However, this race also contributed to tech giant Facebook introducing its own stablecoin/cryptocurrency Libra, which while meeting a dead-end, has managed to provide cryptocurrencies much-needed global exposure.

Now, the global scenario seems perfect for the lift-off of stablecoins as people are advised to not use cash as it could potentially carry the virus and help further contamination.

Although the chaos caused by the pandemic and scare of a recession seems perfect for stablecoins, there are bound to be problems if interest rates traverse into the negative territory. When this scenario transpires, stablecoin providers would slightly tweak their business model by including fees. Tether, for example, charges 0.1% fees for cashing out into the U.S dollars and this is on top of the withdrawal limit, which should be higher than $100,000.

“With interest rates going towards zero, this will affect the yield that they can earn and affect their business model. Profits will go down but if interest rates continue to slide lower into negative territory, it will be interesting to see if the providers absorb the costs or pass on the negative interest to users.”

Tether is by far the biggest stablecoin in the market and it has been on a streak. At press time, the stablecoin’s market cap had far surpassed the $7 billion mark.

Tether’s growth has been astounding; however, it should be noted that Tether is printing USDt which are to be utilized at a later date. According to Bitfinex CTO Paolo Ardoino,

“Authorizing on a chain means that Tether signers need to access private keys. We don’t want signers to access those keys so frequently (many times per day). That’s why we do a bulk authorization to replenish the inventory. While the treasury wallet, where the authorized but not issued tokens are, requires a lower signature threshold /different set of keys. All the processes are in the clear and Tether has always publicly explained this model.”

With stablecoins growing at such a rapid rate, Bitcoin is bound to experience a shock in its value. Additionally, with trillions being minted by the Fed, the inflation effects on commodities and other assets will be an interesting development. For Bitcoin, however, this will bring about a new era of hyperbitcoinization, causing its price to soar to six digits.