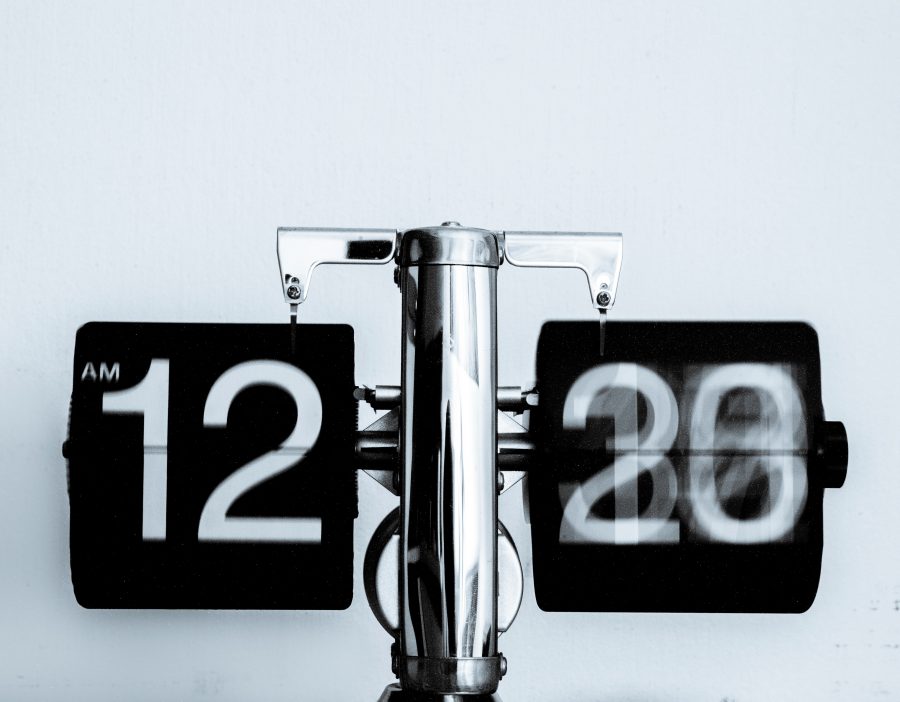 Obviously not. Perhaps this is the reason why most people did not believe Bitcoin would succeed. That is exactly why there aren’t a lot of early investors still hodling. So even if it was predicted that Bitcoin would be worth $118,000 by August 2022, people would be in denial and disbelief.

The further into the future one tries to predict the future, the more ridden with uncertainty it would be.

Take Ed Lorenz’s experiments in the 1960s that tried a basic simulation of the earth’s atmosphere. Lorenz observed that a tiny change in inputs caused a divergence and resulted in a totally different output. Lorenz’s system displayed what’s now known as ‘sensitive dependence on initial conditions’, which is the hallmark of chaos.

The now-famous ‘Butterfly effect’ was thanks to Lorenz’s contribution. The butterfly effect is the idea that the tiny causes, like a flap of a butter fly’s wings in Brazil, can have huge effects, like setting off a tornado in Texas. However, there are predictions based on calculation, like the arrival of Haley’s comet, an eclipse, or gravitational force between planets, etc.

Prediction of the price of stocks or assets is a completely different story, as they are based on human emotions that leak into the market. On a larger time frame, all crash cycles look similar, all bubbles have a familiar rise and decline pattern.

Although not impossible there are plenty of models based on scientific calculations that predict a crude behavior of assets in optimal settings. This is one such model, however, not based on models or scientific models, but a crude prediction of Bitcoin’s price based on the work done by Benjamin Cowen

Bitcoin has not stopped ticking since its inception, although, accurate price data that spans back to the first trade isn’t available. An interesting observation is that subsequent cycles of Bitcoin have started to grow longer. The climb to a new all-time high [ATH] takes longer and so does the retracement to find a bottom. Moreover, Bitcoin’s return in each cycle has been dropping as it gets longer.

So, what will the 4th cycle look like? What will be the RoI? 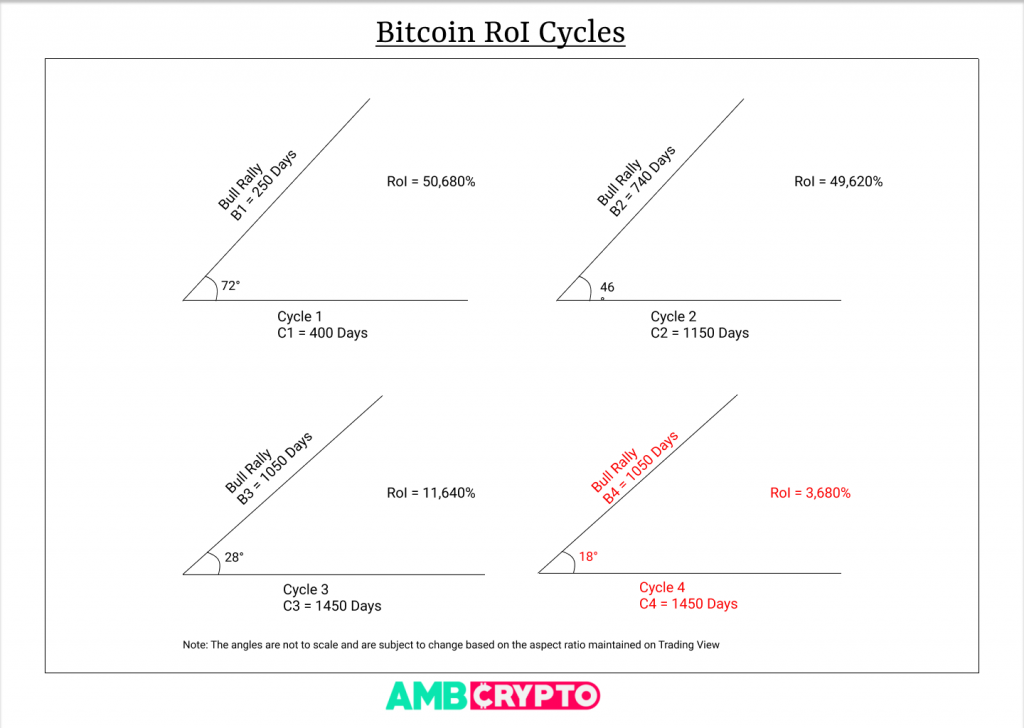 Since RoI is decreasing each cycle, this would also imply that the angle, drawn from the bottom of the cycle to its peak is also decreasing. Further, the angles are in a series with a multiplicative factor of 0.64.

Extrapolation gives the angle of the next cycle as 17.8 degrees, approximately 18 degrees. If the boom cycle’s span were to be known, then the intersection of the two [angle and ATH date] should give the approximate price of Bitcoin and its new ATH for the next boom cycle aka cycle 4.

The first cycle Bitcoin took approximately 400 days and is connected with every other cycle. 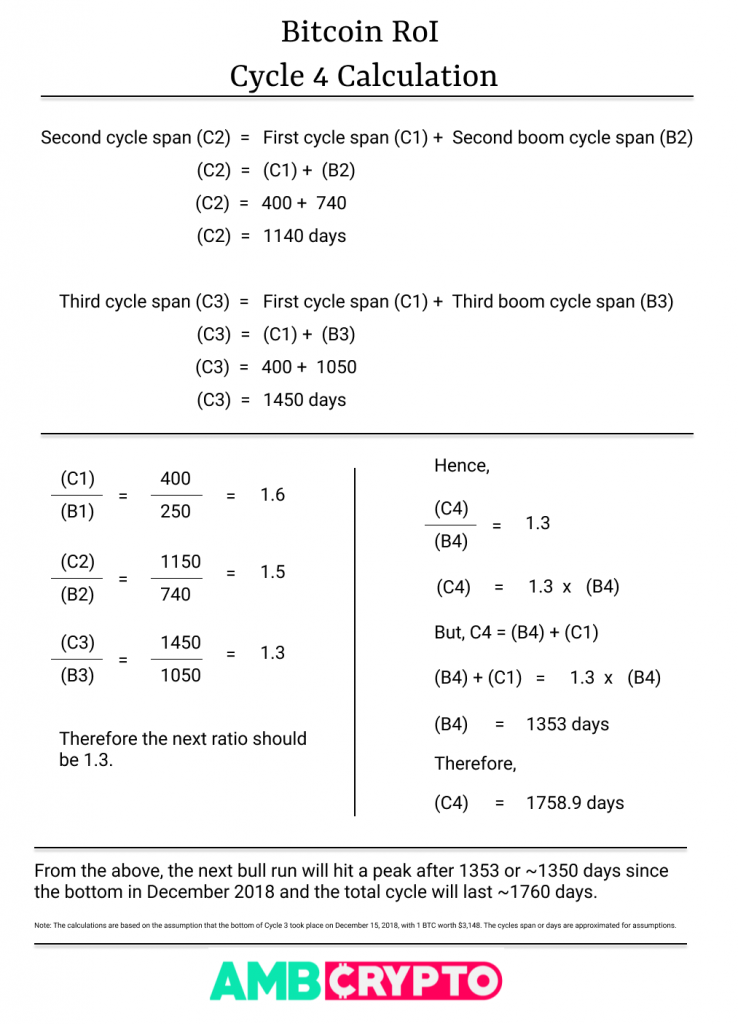 Since the number of days to the peak has been already calculated, an intersection of this with the angle will provide Bitcoin’s peak value for the next cycle. 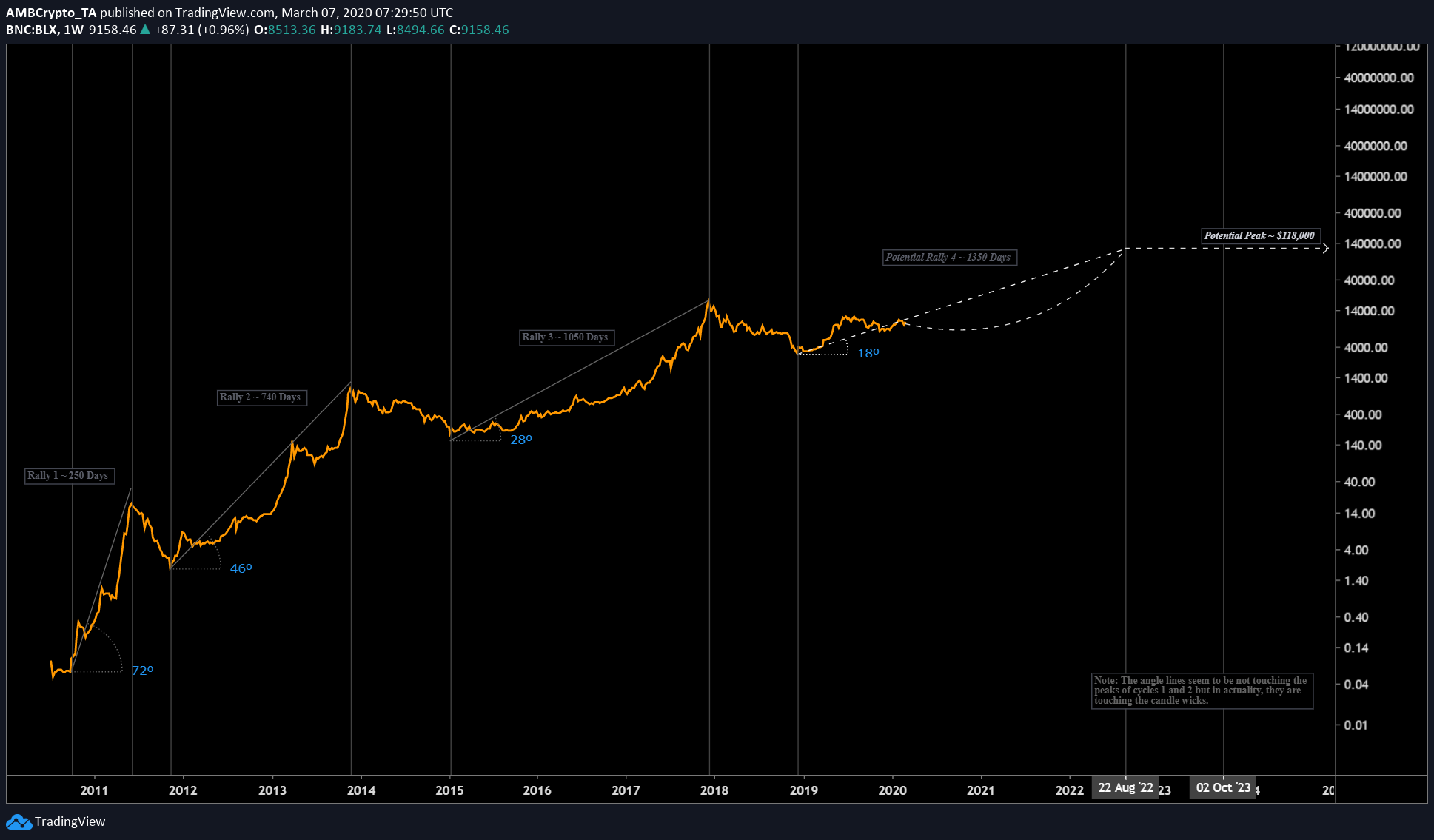 As mentioned by Benjamin Cowen in his video, “this is not an exact science” and it should not be considered as such.

Bitcoin cycles are getting longer with each boom and bust cycle and this is due to the influx of capital and new investors. Basically, there is increasing adoption of Bitcoin, as an investment vehicle, be it to store value or as a speculative asset.

“2020 may be similar to 2019 in that it could be representative of another accumulation year. If market cycles are lengthening, we would expect at least another year of accumulation before witnessing a return to the all-time-high of $20,000… . It is fairly evident that the peaks in the ROI from each market cycle bottom are taking longer to realize.”

Furthermore, every rally seems to have a momentary surge followed by a dip and continuation along the line from the previous bottom to the next peak aka bottom-to-peak line. At press time, the said surge above the bottom-to-peak line has been completed and Bitcoin is slowly strutting below this line. This is the beginning of the rally, which eventually leads to the ATH.

This can be due to an influx of money creating more liquidity in the market. Hence providing fewer opportunities for sharp boom and bust cycles.

Additionally, Cowen’s methodology put BTC at ~$140,000 by the end of 2022 [November or December]. Compared to the results obtained above, there is a difference of $22,000. Hence, a comparison to Bitcoin’s S2F model would be a logical next step.

S2F models provide a range in which the price of an asset could be and it does not predict prices. Hence this is just a basic comparison to know if the price calculated in this article and by Cowen is anywhere near to the S2F model. And as seen above, the price of Bitcoin on August 22, 2022, is approximately $101,000.