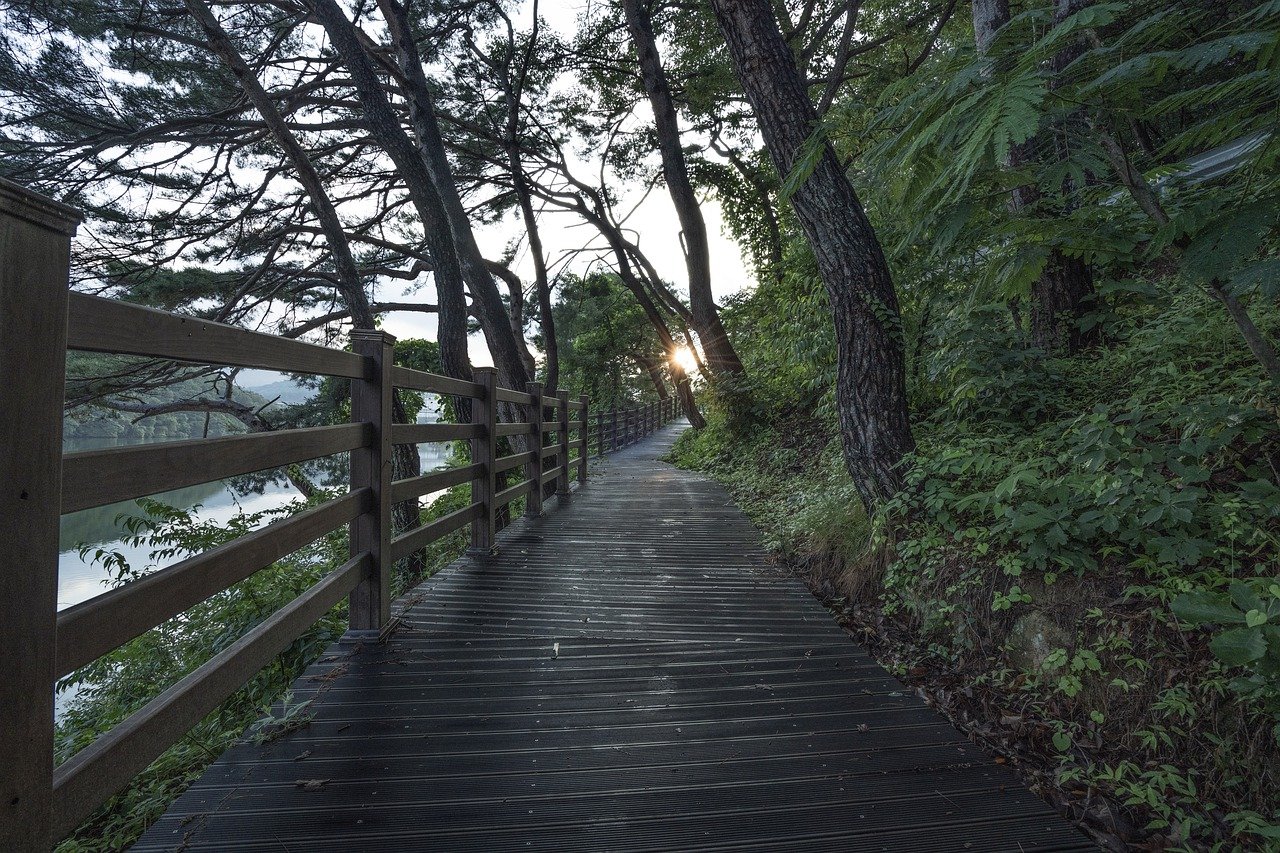 With both the digital assets claiming their place in the green zone, on the trading charts, the short-term period outlook for Litecoin and Digibyte remained bullish.

For Ontology, however, a bearish market resurfaced, with the altcoin witnessing more than a 3% reduction in its valuation over the last two days. 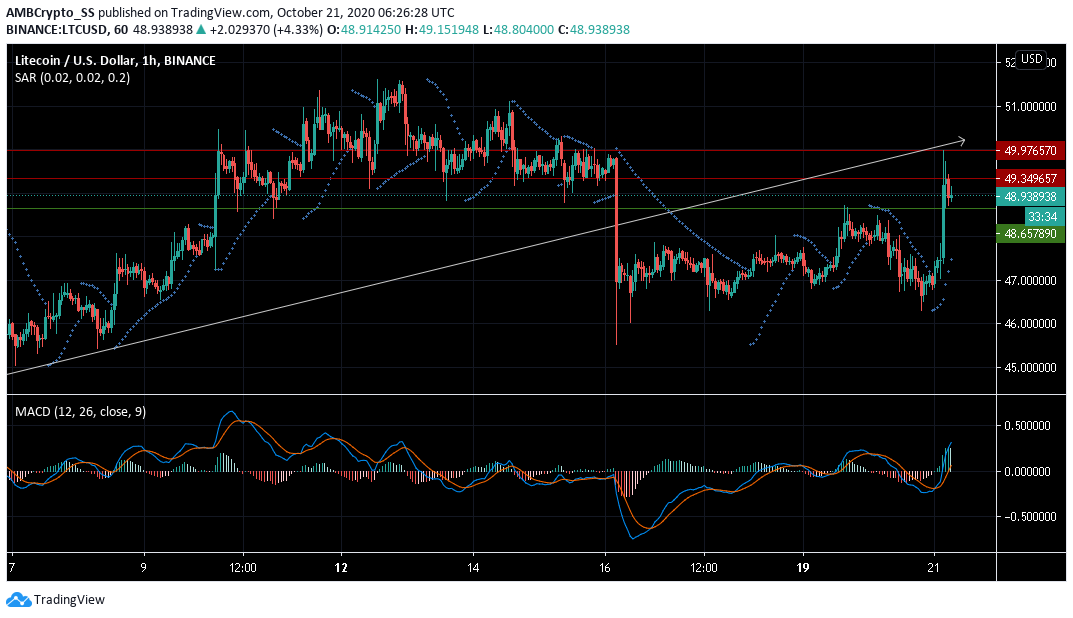 Litecoin at the time of writing was trading at $48.93. Earlier in the day, the digital asset was seen moving above its immediate support level at $ 48.65, after recording a gain of almost 3% since yesterday.

Further, the dotted lines of the Parabolic SAR, below the candles, suggested bulls could push the prices above the immediate support level, as the scenario continued to be bullish.

The outlook displayed by MACD too remained bullish for the short-term period, with both the MACD and signal lines seen above the zero level.

Despite being in an overall uptrend, a breach of the $ 49.34 overhead resistance in such a scenario, could take a few more trading sessions. 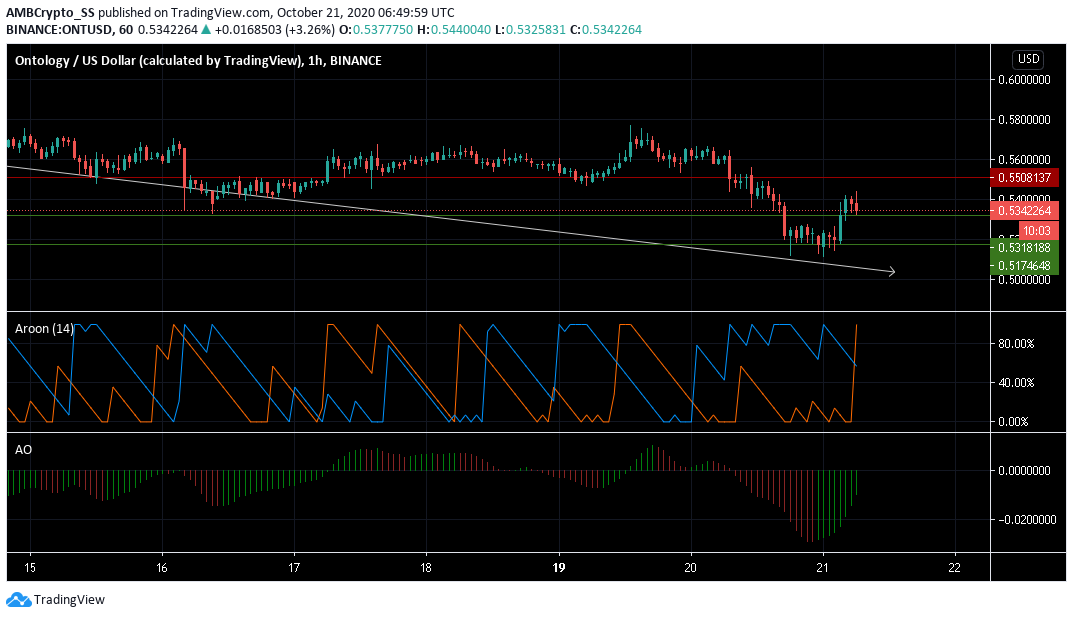 Ontology was seen falling back to the immediate support level at $0.531 at press time, this further added to the losses of the digital asset which stood at 2.7% since yesterday.

The Aroon indicator however with the Aroon Up (orange) rising above the Aroon Down (blue), in a bullish crossover was also signaling towards a price recovery opportunity for the ONT market.

The Awesome oscillator too was displaying a trend reversal with green closing bars below the zero line, further painting a situation that could soon turn bullish from bearish.

If this positive momentum continues, the price after consolidating around the $ 0.531 support, could push above this level, and retrace some of the gains from last week. 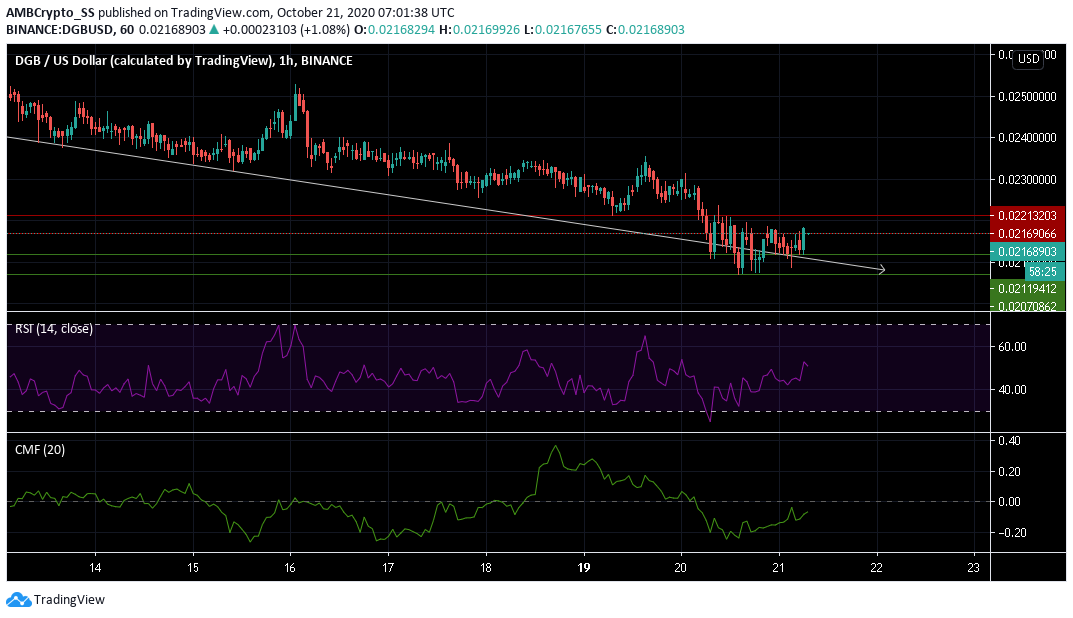 As seen at press time, a strong buying momentum, pushed Digibyte prices above a key support level, at $0.021. In fact, the digital asset at the time of writing was up by almost 1.3% since yesterday.

The Relative Strength Index (RSI) had been on the rise for the last few days and was still above the neutral 50 zone, confirming the presence of a buying sentiment in the short-term period.

Although the Chaikin Money Flow, was still below the zero level, the consistent rise in its level indicated the capital inflows could soon be greater than outflows for DigiByte.

Finally, the $0.022 resistance level was still not breached. But early signs picked up from Digibyte’s technical indicators hinted towards the possibility of another positive rally that could be witnessed over the upcoming trading sessions.