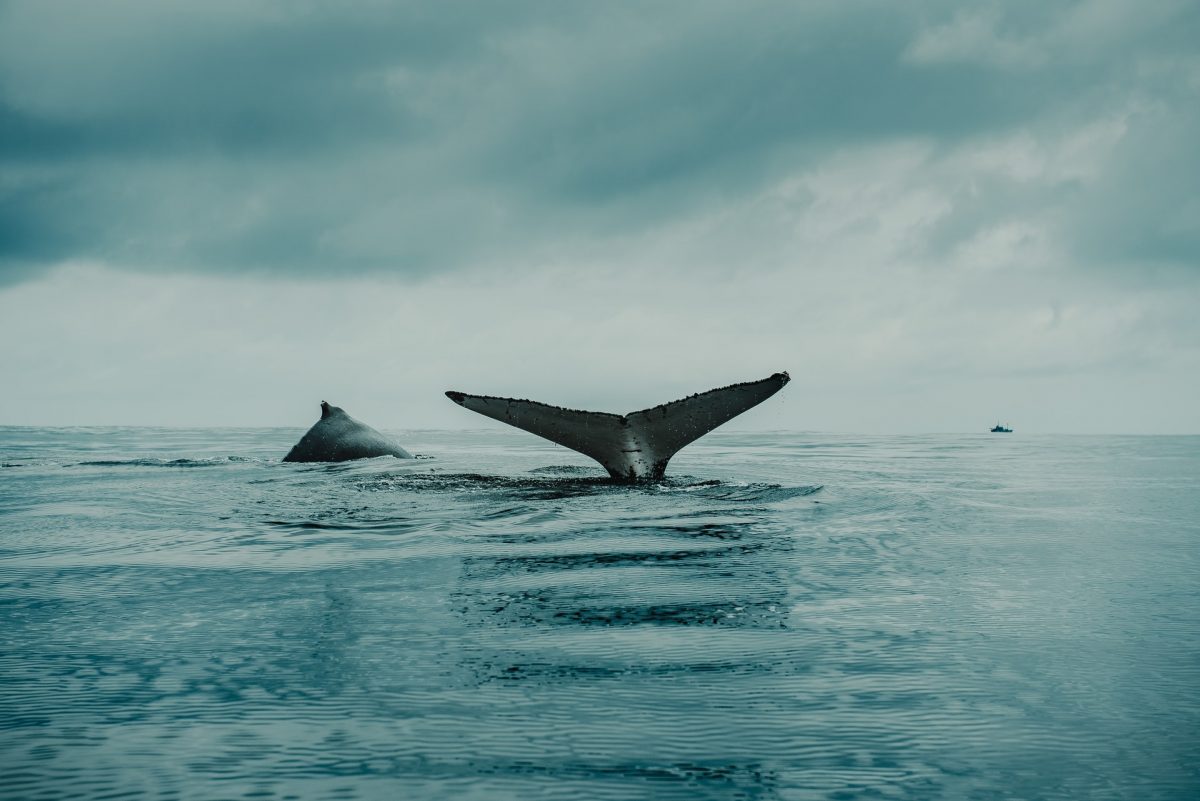 Wealth distribution is a tricky subject, primarily because the crisis is real and has been around for such a long time that inequality is now shockingly entrenched. Here’s a wild statistic – A little over 2,000 of the world’s billionaires possess more wealth than 60% of the planet’s population. The consequences of this broken economy are socio-economic problems such as high unemployment, tighter mortgage rules, increased income inequality, and reduced pensions.

Due to numerous factors, the gap between the elite and the remainder of the world’s population continues to rise.

Even the cryptocurrency industry is not immune to this uber-wealthy group of people. “Whale” is the term that is typically used to define investors who hold a large number of digital assets.

The cryptocurrency space has grown from a tight-knit community of techies to different kinds of traders and investors who have entered to explore the market. However, the first ones to make an entry were the tech buffs who bought coins when they were valued at a few cents and continued to HODL as the community and the industry grew. Bitcoin, then, was yet to capture the public imagination.

Today, however, the space is not filled with just one kind of trader. There are investors both big and small. From being a rebel tech to increased institutional favoritism, Bitcoin has seen it all. However, slowly increasing is the number of these whales.

So, the question is, ‘Will Whales ever stop existing in the cryptocurrency industry?’ The answer is most definitely a ‘No.’

Much like the traditional asset class, concerns pertaining to Bitcoin whales relate to situations where the coin is controlled by a handful of elites that may be in a position to get by with market manipulation.

While pumps and dumps are a part and parcel for many coins, especially the new ones without many use cases, do whales posit a severe worrying scenario? The fundamental principle of the Game Theory of coin value suggests whales are long-term HODlers of Bitcoin and would not want to destroy the value of it by manipulating the market.

These whales do not generally make investments in the open. Rather, to ensure that smaller market participants are not affected by their large orders, whales tend to go for Over-The-Counter or OTC trades.

Back then, when Bitcoin first became known, it was a risky asset class. However, a few adopters did invest in it and as we all know today, there are several millionaires. According to Investopedia, some of these people include Barry Silbert, Blythe Masters, Dan Morehead, Tyler and Cameron Winklevoss, and Mike Novogratz.

There are countless other stories of how Bitcoin made people filthy rich overnight. At a time when even mentioning Bitcoin would raise eyebrows, a few sold off their coins after the crash and the excessive speculation that followed.

However, many still have safely kept their coins in their private wallets. A significant portion of these funds has been dormant for ages. Years of accumulation, coupled with price appreciation, has driven up their holdings. Today, they are called Whales.

Small investors might not have a “whale of a time” though

This is primarily because of the damage these whales can potentially do to the market. Here are a few of the common tactics that might be used by whales to “manipulate” the market.

The Good and the Bad [mostly the bad]

Everything has two sides. Manipulation by whales sometimes can be helpful. Let’s talk about the greater good. A token for a philanthropic purpose, for instance. Or cryptocurrencies with utility that actually have great potential real-life use cases, but needed an external push.

Despite this, manipulation is malpractice, regardless of how sincere the end goal is. And these obfuscation tactics used by savvy traders are actually considered securities fraud in the traditional world. However, there are very few actors in the crypto-realm that can actually help detect these, and hence, they thrive.

Whales can not only destroy retailers’ hard-earned money, but also crush the confidence of the less-experienced and newbies seeking to enter the market.

With all the FUD and FOMO ruling the space, most of the time, it is the good tokens that tend to lose the race.

This is no less than the ‘antithesis’ to decentralization, with the control of the money in the hands of few elites. This goes against the very idea of the creation of the system of money that lies beyond manipulative hands.

The Rich get richer. Are the Bankers fooling the people again? Take the case of Jamie Dimon, the CEO of Wall Street banking powerhouse JP Morgan. He was the one who said that “Bitcoin is a fraud that will eventually blow up.” His comments made waves and were enough to send a lot of holders into panic and a sell-off. In fact, many in the community opined that his comments were attempts to spread FUD in the community.

A few even speculated on the remark Dimon made about any JP Morgan trader caught buying or selling Bitcoins being “fired in a second” – for “being stupid.” However, he later expressed his regret. Now, his bank has reportedly started accepting two of the most popular U.S-based Bitcoin exchanges, Coinbase and Gemini, as clients.

Despite the fact that the impact of whales on the market has lessened over time as the market matured and institutions embraced the space, their presence is very much evident in sudden price swings.

It has been almost two months since the third Bitcoin halving event. Since then, the number of whales has gone up by more than 2%. This was observed from Glassnode’s “Hodler net position change” chart attached below. The overall mood among this section of Hodlers’ was to accumulate and save up, rather than spending, despite Bitcoin’s frenetic price movements. 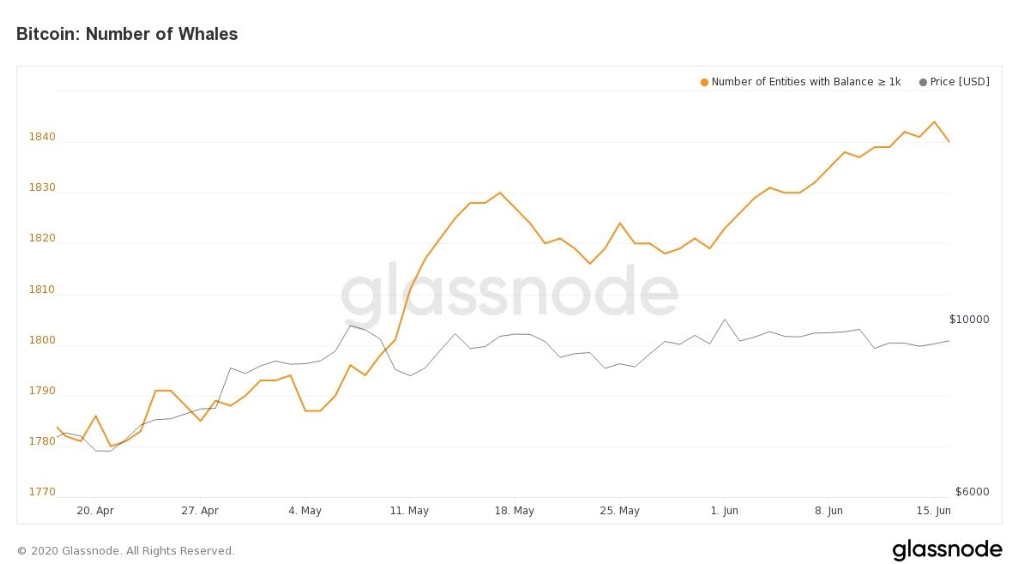 Moral of the Story

Whales will always be there. There is no stopping them or curbing their ability to accumulate more coins. This is primarily because there are no limits on the number of coins any one person can hold. Hence, there is not much that can be done against this section of holders since setting up a bar would bring back centralization issues.

“Whales” are not thought to be “very dangerous” as they are known to be long-term HODLers. With the increase in the market cap of Bitcoin, liquidity concerns also fade. However, they do trigger sudden pumps and dumps.

Remember the man who traveled the world after making a profit of $25 million in Bitcoin? According to a Forbes exclusive, this man became a multi-millionaire during the 2017 bull run. In October 2017, this man bought Bitcoin when it was priced at just $0.15. He claimed to have invested $3,000 back the,n making his holding slightly less than 20,000 BTC. A couple of years later, as the bull run began and Bitcoin’s price exploded, he became a millionaire.

He quit a decent paying job in Silicon Valley and started traveling the world while staying at uber-luxurious hotels and always flying first class. Bitcoin changed his life. However, he did not want to take any chances. He reportedly said,

“I really do think it will get there. But a lot of governments and companies will have to be on board, first. No amount of speculation in the world will push it that high.”

Unlike him, not all holders are keen on the technology and the potential of Bitcoin as a currency. So, market manipulation will continue to exist. What is important, however, is to cut through the noise and make wise decisions. The thumb rule should be a long-term view of the market to make sense of the overall trend.

Related Topics:Bitcoin whalesfeaturedGlassnode
Up Next