Cryptocurrencies are considered to be seizure and censorship-resistant, when compared to fiat currencies. This has been significantly beneficial to people who have been targeted by governments or who value the level of privacy crypto offers for their finances. However, with cryptocurrencies like Bitcoin, total anonymity is never always possible, but self-sovereignty is. Interestingly, in recent times, the debate over privacy concerns and cryptocurrencies has once again found itself towing the thin line between security and surveillance.

On the latest episode of the Stephen Livera podcast, Chris Belcher, privacy commentator, discussed the effects of blockchain surveillance on crypto and the implications it has on the ecosystem. He highlighted that blockchain analysis companies are just “surveillance companies” that analyze peer to peer networks, but their capabilities are not just limited to analysis. He pointed out that in order to curb illicit financial activities, mass surveillance doesn’t have to be the only solution. He added,

“You could probably stop money laundering and the other things that the government is interested in without doing the mass surveillance on every single person, even if they’re just using Bitcoin for other things like buying an anonymous VPN.”

For most companies that fall into this category, their analysis of blockchain transactions is done with the intention to strengthen AML laws and track stolen coins used for illicit activities across multiple blockchains, exchanges, etc.

According to Belcher, the fact that post-KYC user information too gets stored on databases and allows monitoring and tracking, is worrying. This may have serious security and privacy implications, he said.

Crypto has seen increasing regulations and legal scrutiny over the past few years. While this has steadily increased adoption rates and has helped the ecosystem go past its darknet days, the question of whether or not certain ideas are getting watered down is up for debate. 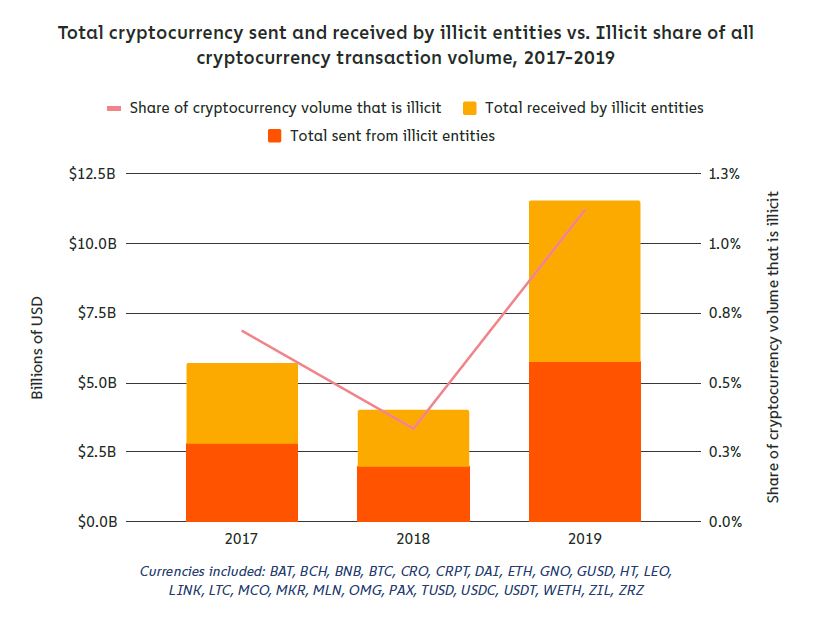 However, a recent report by Chainalysis also showed that illicit cryptocurrency transactions had risen, both in total value and as a share of all cryptocurrency activity which makes such measures undertaken by the authorities to continue to have relevance despite its pitfalls.

Earlier in the year, Chainalysis had launched its Know Your Transaction (KYT) tool that can be used to detect and prevent illicit activities like money laundering in real-time for popular cryptocurrencies including Bitcoin, Bitcoin Cash, Litecoin, and Ether.

Belcher pointed out that partnerships with such analysis firms will always involve information sharing which can also become a bit problematic from a privacy standpoint. He said,

“With the other techniques of analyzing the blockchain, they can they could figure out, for example, guess, if that was you making a payment or if it was maybe a sending to your own different wallets or like if you’re paying many people at once or that kind of thing, they could essentially see all the flows of money around.”

Further, during a recent interaction, Jesse Spiro, Chainalysis Head of Policy, had highlighted the importance of regulatory oversight which can lead to a fall in the ever-present threat of cybercrimes involving various aspects of the crypto-ecosystem.

“In general, cybercrime has become a major threat to both traditional financial services and the cryptocurrency industry. We are already seeing regulators take a proactive approach to mitigate this kind of activity, including adding new requirements around security, storage and more to their registration and licensing regimes.”