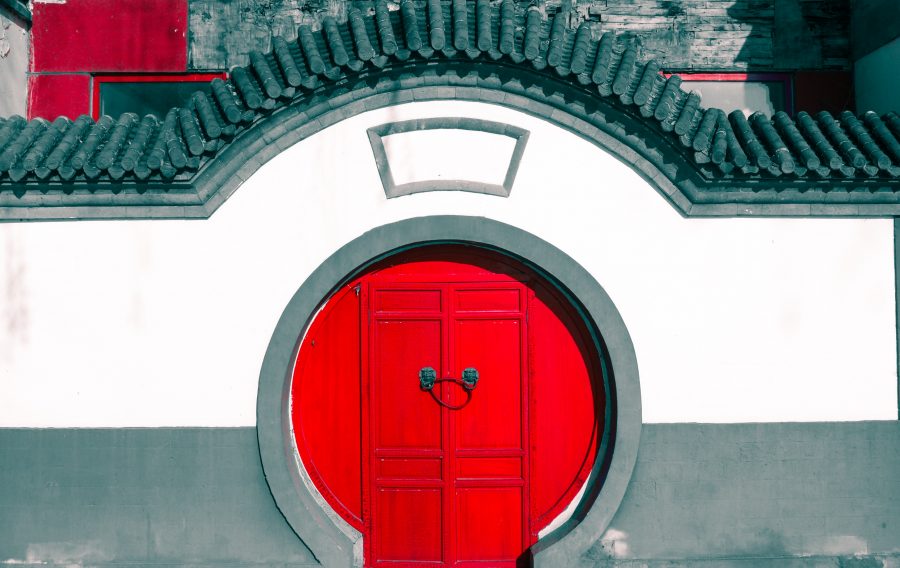 “Bitcoin to the moon,” might not be so far after all.

In a week that was marred by Mark Zuckerberg sitting pale-faced before the House Financial Services Committee, Bitcoin, better late than never, swooped in and stole the spotlight. The Libra-engulfed week was signed off with the real and true cryptocurrency skyrocketing by over 35 percent.

Generous as ever, the king coin didn’t forget the minority in its mammoth ascent. The entire top-10 is awash in a sea of green, with Ethereum inching closer to $200, XRP trading at over 11 percent on the daily scale, and the Bitcoin name-grabbers, Bitcoin Cash and Bitcoin SV, each rising by 28 percent and 35 percent, respectively.

To further underline the importance of this move, the bearish market conditions should be noted. Bitcoin has been in a downward descent since June [when it reached it 2019 high of $13,800]. Breaking down from a descending triangle, on the back of the failure of Bakkt’s Bitcoin Futures, Bitcoin dropped from $10,000 to $8,500 in 48 hours.

The second coming of the collapse occurred this week, when Bitcoin dropped by another 10 percent to reach $7,400. Compounding its woes, this crash sent the cryptocurrency into its “Death Cross,” with its 200-day Moving Average overtaking its 50-day equivalent, which analysts consider a bearish sign.

Defying the charts and the dampening expectations of the larger market, Bitcoin surged, and it has a few people to thank.

Xi Jinping, the President of China, was the unlikely catalyst to the Bitcoin price rise. On 24 October, addressing the Political Bureau of the Central Committee, blockchain and Bitcoin, by extension, was given a blessing by the Chinese President.

Blockchain technology together with industrial innovation is the “main direction” for China. Xi’s maiden positive comments on the underlying technology powering Bitcoin and cryptocurrencies caused a huge inflow of money into the market, causing the price to shoot up. His comments on the Distributed Ledger Technology read,

“We must take the blockchain as an important breakthrough for independent innovation of core technologies.”

The technological foundations are already present in China. Xi emphasized the need to accelerate the same with the focus being on Blockchain, both in research and in implementation. The integration of the technology should not just be on an administrative level, but should apply to global issues as well, evidencing the world’s banking and payments realm, sectors that China has been participating very heavily in.

China’s effect on Bitcoin’s price cannot be understated here. Even though other factors may have contributed to the price rally, their effect is marginal. This is an observation that was made by several analysts. “It’s due to President Xi’s speech putting blockchain as China’s priority,” said Bobby Ong, Co-founder of CoinGecko, a cryptocurrency data aggregator, told AMBCrypto.

Not even considering any other catalyst for the price push, Alex Krüger, a cryptocurrency analyst and economist, was quite direct in his reasoning,

In light of the aforementioned “Death Cross” and Bitcoin defying bearish tendencies by surging upwards on the back of the news from China, sentiments might be at play, as Mati Greenspan, Senior Markets Analyst at eToro, put it in his daily newsletter on October 25. “Sentiment can change pretty quickly in this market, especially while volumes are low,” he said, referring to Bitcoin’s [then mild] rise following Bitcoin’s entry into the Death Cross.

It’s quite apparent that China has long been part of the “Blockchain, not Bitcoin,” camp cracking down on Bitcoin exchanges, miners and even WeChat groups, while making Blockchain their administrative policy. Investors in the cryptocurrency space however, are fickle, and in their perception, China embracing blockchain is a sign of positive movements towards Bitcoin, which is not necessarily the case.

It’s been less than a month and Bakkt already seems like old news. Beginning its journey in the cryptocurrency industry with paltry trade volumes, the Intercontinental Exchange’s brainchild is now gaining speed.

On 25 October, Bakkt’s volume surged to 1,131 BT based on the last traded price recorded i.e. $8,600, with the volume ranging just short of $10 million [$9.72 million]. The official Twitter handle for ICE’s digital assets platform recorded the total volume at 1,179 BTC worth of contracts traded, which if valued at a price higher than the recorded price at 1,131 BTC, suggests that the volume is well over $10 million.

The Bakkt move on 26 October shattered its ATH volume, which was set two days earlier – at $4.8 million, as seen below. 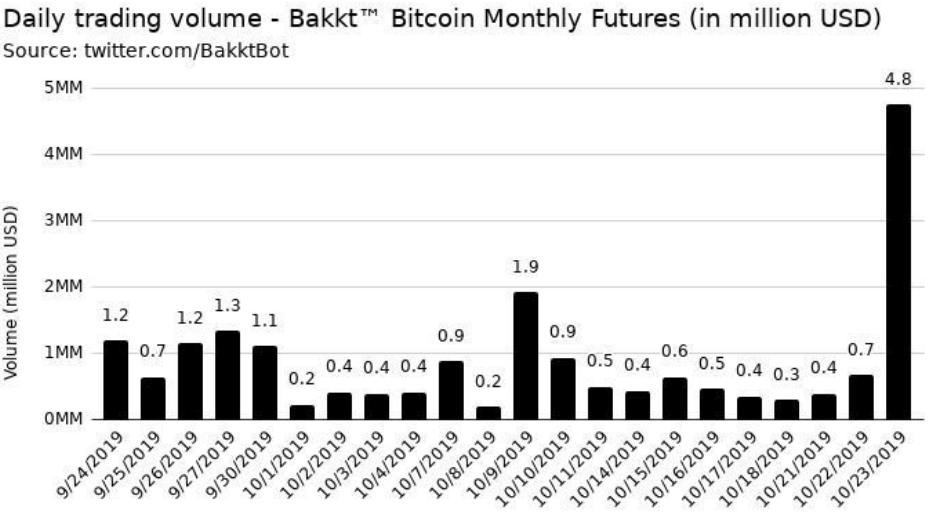 Although, this was a massive move, relative to the previous tidings of Bakkt, the move is a successor to the China effect and not a predecessor. Xi Jinping’s comments no doubt fuelled the Bakkt rise, as institutional investors scurried to the ICE platform in search of Bitcoin Futures as the price was surging.

Going back to the question of sentiment amid low volumes and gaining prices, Futures was impacted more than most. As the early effects of the Chinese President’s blockchain comments were fuelling the Bitcoin market, the price began to recover from the lows of $7,400 and derivative traders began to take notice.

BitMEX, the Arthur Hayes-led Futures exchange which has been seeing massive increases in its Bitcoin derivatives volume in 2019, saw its short positions liquidated. Cryptometer, an online tool tracking the liquidation of forward positions on BitMEX, saw the 24-hour shorts “REKT” at a whopping $325 million, at press time, in its XBTUSD contracts. This would put the longs “REKT” at 92.16 percent against its short positions. Ethereum saw the same ratio at 96.28 percent.

This liquidation, at least the early parts of it, caused a “short squeeze” in the market and fueled the purchasing volume while pushing the price up. Skew Markets referred to this as a “big squeeze” which, when Bitcoin was up by 13 percent on the 24-hours scale, was valued at $150 million in liquidations. 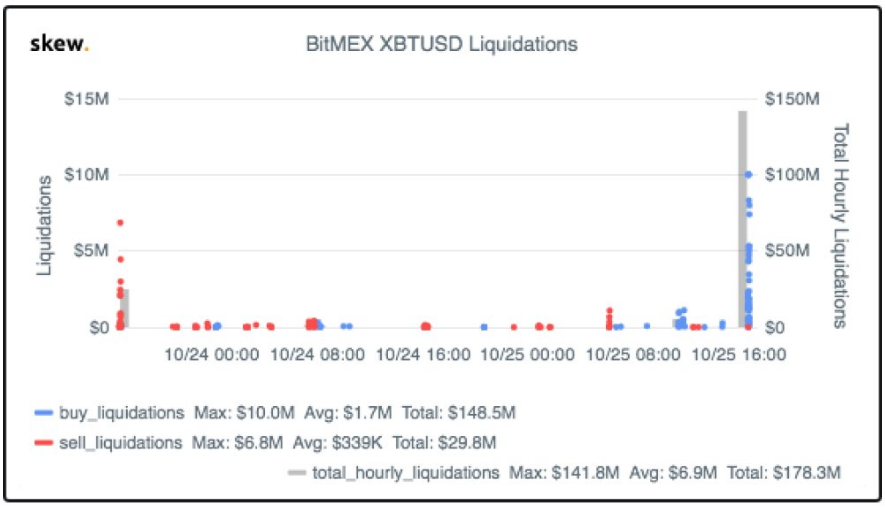 Even though this could have added on to the bullish pressure, it was once again, a consequence of the China-induced Bitcoin price rise, not a cause of it. Most analysts were adamant that despite the short squeeze having a positive effect on the market, it only fueled the price mildly.

Tether at it again?

Over the past 24 hours, there has been a wave of Tether printing moving in accordance with the price of Bitcoin, and yesterday’s price rise was no different.

According to Whale Alert, a Twitter handle tracking large cryptocurrency transfers between wallets, the market recorded a slew of USDT creation. The Tether treasury saw significant chunks of USDT minted, valued at well over $200 million, according to the tracker.

The tie between Bitcoin and Tether is often forgotten outside the cryptocurrency circles. But to those within, it bears more prominence than any other technical indicator of BTC’s price. “Any technical analysis that doesn’t prominently feature the word ‘Tether’ is misleading nonsense and should be ignored,” said David Gerard, author of Attack of the 50 foot Blockchain. When asked about the historic relationship between Bitcoin’s price and the like-for-like printing of Tether, Gerard told AMBCrypto,

“The statistical evidence is overwhelming – the Bitcoin price keeps going up with Tether issuance. There’s no smoking gun link, but it correlates way too closely to be chance.”

Less than 24 hours ago, the cryptocurrency world was pitching a tent in the bearish woods owing to the confirmation of the Death Cross and an incoming slump. Now, it looks like Bitcoin is ready to raid frontiers further ahead. Although, the price corrected down to $9,400 since passing the five figure mark, a severe correction taking Bitcoin back down below $8,000 is not foreseen by most.

Even experts are finding the topsy-turvy market hard to predict, Ong, who is keeping a close eye on the price movements, stated that things are looking to simmer down, compared to the massive price fluctuations seen at the peak of the upswing. Ong is not alone in this now-here or no-where market; sentiments and technical indicators were lined up to signal bearish days, and one piece of news from China added over $2,500 to its price, along with Futures increase, shorts liquidation and a host of other things.

Can this be tied down to Chinese causation or is it just another episode in the roller-coaster that is Bitcoin?

Related Topics:BakktbitmexblockchainChinaXi Jinping
Up Next