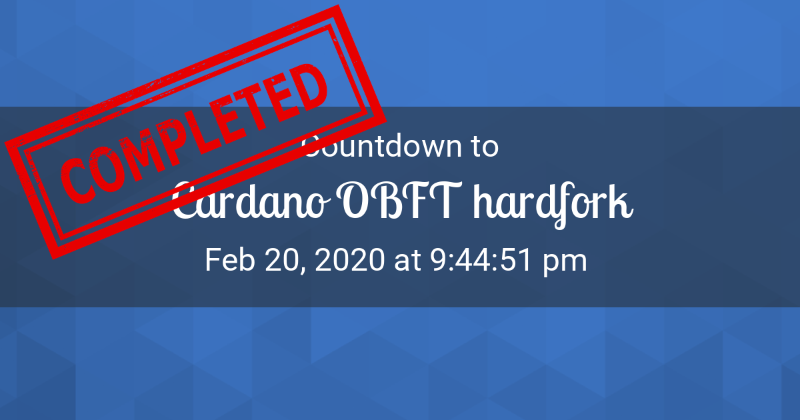 IOHK introduced an important update on 20 February as an intermediary step before launching the Shelley era functionality on the Cardano mainnet. The team announced the successful implementation of its Ouroboros BFT hard fork that replaced the original consensus protocol Ouroboros Classic [Byron Era].

“We have now entered the “OBFT” era. #OBFT stands for “#Ouroboros Byzantine Fault Tolerant”.
⚠️$ADA holders DO NOT need to take any action during or after the hard fork.
⚠️NO new #ada coins are created and/or cannot be claimed. Beware of scammers telling you different!
#Cardano”

Ouroboros is an advanced proof-of-stake [PoS] protocol and the deployment of OBFT will act as a bridge between Cardano’s Byron and Shelley era. In a video uploaded by IOHK, Tim Harrison, Director of Communications, spoke about the importance of this one of two hard forks.

“Now the OBFT update, Ouroboros Byzantine Fault Tolerance, is a really important step as we head towards the Shelley era on mainnet, because this protocol update, or hard fork, acts as a bridge between Ouroboros Classic, which we’re currently using on the Byron mainnet, to Ouroboros Genesis, which is what will power the Shelley era.”

Earlier this month, the team had released Cardano Haskell implementation that consisted of two main components – Cardano node and Cardano Explorer Backend and Web API. Termed as a new architectural foundation, Haskell was another step towards its preparation for Shelley and Goguen and opened the doors to third-party developers and enterprise solutions.

The latest update, along with Cardano Haskell’s implementation, will allow the team to migrate the core nodes that create blocks. In its earlier post, the team had noted,

“The new implementation, coupled with the update to Ouroboros BFT, will also lead to significant TPS (transactions per second) performance improvements. For end-users, the benefits of this update will be cumulative, as the Cardano network profits from greater developmental support and system adaptability and portability.”

Ethereum’s still out in front; finds Bitcoin in its mirror