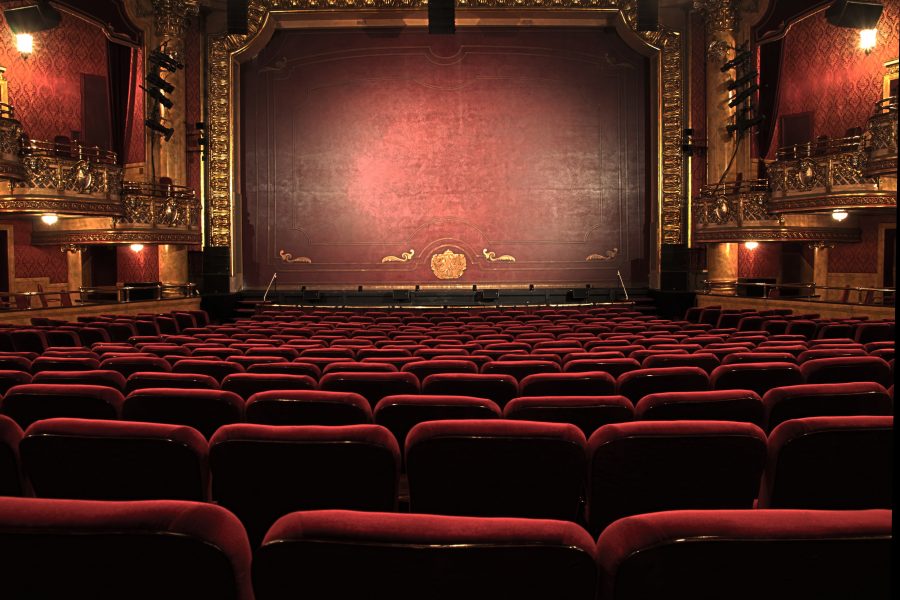 Futures are seen in the financial world as being akin to gambling. When combined with the lure and volatility of cryptocurrencies, it’s a whole different ball game.

Bitcoin Futures have been around for two years now and already, they have gathered a head of steam, now challenging the spot market, as retail customers look ahead. From the outside looking in, there are two factions to the Futures world – regulated crypto-derivative providers and in-house exchanges.

On the regulated front, seen primarily from the United States, the CBOE [Chicago Board of Options Exchange] and the CME [Chicago Mercantile Exchange] are considered the initiators of the December 2017 bull-run and are the main sources of Wall Street’s investment in digital currencies. While the CBOE bowed out of the Bitcoin derivatives race earlier this year, the CME Group is going strong.

In-house, organic exchanges are dominated by BitMEX, the Seychelles-based derivatives-focused exchange, currently under the scanner by the CFTC [Commodity Futures Trading Commission] and exchanges like Binance, Huobi and bitFlyer, spot exchanges that are now venturing into Futures products.

Unregulated Futures and unregulated cryptocurrencies seem like a bad option, rife with unending fluctuations and manipulation, but it would seem that the volume is soaring; More so due to the speculation that is present in the two markets rather than because of the presence of a market supervisor, which is absent at the moment.

According to data from Skew Markets, BitMEX recorded the highest 24-hour Bitcoin Futures volume with $2.28 billion traded so far. With a deficiency of over $1 billion, Huobi took the second spot with $1.27 billion volume, while bitFlyer, CoinFlex and Binance took the following spots with $740 million, $610 million and $600 million in 24-hour trade volume, respectively. 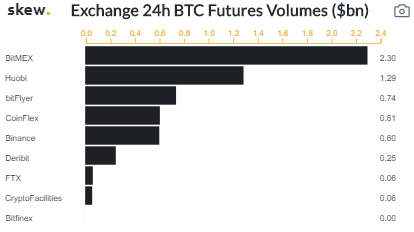 In comparison to the spot market, the traditional markets’ trend is reversed. The 24-hour trading volume of cryptocurrencies as a whole is well over $50 billion, while Bitcoin’s alone is above $18 billion, well over its Futures equivalent, unlike other markets. Bobby Ong, Co-founder of CoinGecko, a cryptocurrency data aggregator, acknowledged this ‘trend reversal’ and stated that it could flip in the years to come,

“In the traditional markets, derivatives volume are far higher than spot markets. However, in crypto, this is the opposite. We should see this trend reverse in crypto in couple of years time.”

Bitcoin Futures is slowly becoming a crowded space due to the volatility of the market in 2019. Beginning the year at $3,300, the price of Bitcoin was well over $8,000 in four months, topping out at $13,800 by June and down below $8,000 in October, underlining the fluctuation in the market.

CoinGecko’s quarterly report suggested that there has been an almost 6x increase in the number of exchanges offering derivative products from July 2019 to October 2019. To put that figure in perspective, the Futures volume per exchange is $440 million, while the Spot volume per exchange is $150 billion, indicating the return per capita in the Bitcoin Spot versus Futures market. Ong added,

“In 2019, we have also observed a big increase in number of derivative exchanges coming into the market. There are now 17 exchanges offering derivative products. Now, almost every major spot exchange has a derivative section.”

On the west of the Atlantic, Bitcoin Futures are in high demand. With a big name like the CME Group and a volatile product like Bitcoin, Wall Street is bullish on cryptocurrencies. An important caveat to mention here is that Bitcoin Futures offered by the CME are cash-settled; So, as much as institutional American investors are loving the volatility of Bitcoin in contractual form, don’t expect them to hold crypto anytime soon.

With Bitcoin moving the way it is in 2019, CME had a ball. In August, the Chicago-based exchange stated that since the beginning of the year, the average number of contracts traded per day was 7,237. Although the trend has been inconsistent for the year, an average of 7,237 contracts, each representing 5BTC, is quite the number.

The CME volumes unexpectedly spiked in late September due to the failure of Bakkt, the Intercontinental Exchange’s physically delivered Bitcoin project. Due to the underwhelming response that Bakkt faced from institutional investors, CME saw a positive spillover. Bakkt’s September 23 launch saw a the equivalent of 72 Bitcoins traded, while the average CME Bitcoin Futures volume between 24 September and 26 September was 10,609 contracts, 46.5 percent more than its yearly average.

Based on the above chart, the momentum of September has not carried onto October, with the highest amount of contracts traded per day being 6,220 [October 7], but looking ahead, market participants are buoyant. Bakkt’s failure caused a price crash, taking Bitcoin from $10,000 to under $8,000 where it currently hovers, but price perspectives are more green than red.

According to Skew Markets, long positions by institutional investors on Bitcoin Futures on the CME Group have been rising in October, despite the contracts traded averaging at around 3,500. Citing Open Interest i.e. the total number of outstanding contracts in both Futures and Options form, the data suggests an increase from $250 million to over $1 billion. 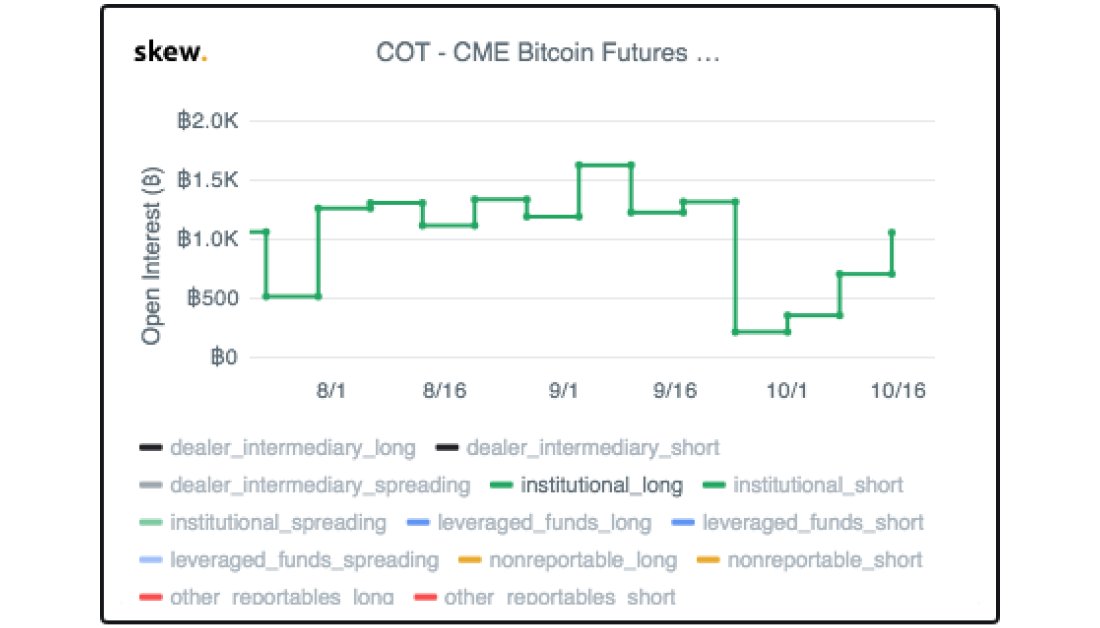 From the trading point of view as well, Futures might be part of the ‘learning curve,’ once the spot markets are mastered, claimed Andy Cheung, Head of Operations at OKEx, a Malta-based cryptocurrency exchange.

“I think it’s like a learning process for crypto traders. Most people start with spot, then derivatives when they’re confident enough for advanced trading.”

The need to stay on your feet in a fast paced market like cryptocurrencies is paramount, but traders not only survived but thrived with the prospect of leverages and margin trading serving as a “good alternative,” according to Cheung.

As mentioned earlier, Spot markets are considerably larger than the Futures market, given the complexity of the latter, but the gaps seems to be narrowing rather than widening. The Futures market is nascent, seeing market interaction only from 2017 when the CBOE and the CME agreed to list Bitcoin Futures, leading to other participants joining, while spot markets are seen as the main entrance for common retail customers.

Due to the huge number of participants in the Spot market, volume manipulation becomes easier. Bitwise Asset Management, a crypto-centric asset management that was gunning for a Bitcoin ETF for a major part of 2019, addressed this division. In its report presented to the SEC to dispel the manipulation claims in the cryptocurrency industry, Bitwise stated that 95 percent of volume is “fake or non-economic in nature,” and a large chunk of that comes from the spot market.

In March, when Bitcoin was trading at $4,000, the reported spot volume was $6 billion while the actual volume was $273 million. In contrast, the Futures volume was 1/3rd of the latter sum at $91 million, based on data from the CME and the CBOE.
Comparing the two markets even further, the derivatives market is gaining momentum. Bitwise, in a subsequent report, charted the Futures market as a percentage of its Spot equivalent and saw a massive increase. In February 2019, the Futures market was 34 percent of the Spot market, its highest point since July 2018, when it was 20 percent, and that was prior to the price increase. 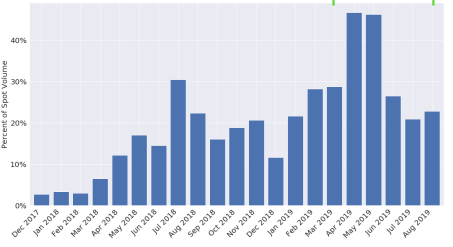 As Bitcoin’s price rose in the second quarter of 2019, the Futures market in April and May was over 45 percent of the Spot market. The price drop that followed after Bitcoin topped out in June saw the Futures hold drop to 25 and then, 20 percent respectively, from June through to September. In August, the ADV [Average Daily Volume] of Bitcoin Futures on the CME Group was $234.38 million, down from over $500 million in May.

More so, a move from Spot to Futures is a sign of the market maturing, claimed Cheung, who added that his users are becoming well versed with the derivatives market.

The market demand from the retail sector on the spot side of things also looks bleak in comparison. While the Futures volume, as presented on an exchange basis, is surging, the retail volume is slumping.

For the month of September, the total monthly volume for Bitcoin in the spot market [for September] was under $540 billion, down by almost $200 million in August and over $820 billion in July. This spot slump was further amplified on a country-by-country basis, given the retail crowd that resides there.

Data procured from CryptoCompare stated that fiat currencies in the spot market weren’t doing that well. Japan, for example, saw a massive drop in their its Bitcoin volumes, with the JPY – BTC volume dropping from 1.035 million BTC traded in August to 621,000 BTC in September – a 40 percent drop. This slump followed the 16 percent slump that occured between July and August.

The USD which accounted for 47.82 percent of the total crypto-to-fiat trade fell by 19 percent in September, from 1.33 million Bitcoin to 1.07 Bitcoin. The Euro saw a 9 percent drop while other fiat currencies, namely the Korean won, the Polish zolty and the Great British pound also saw declining performances as the retail market subsided.

Bobby Ong attributed this retail drop to “market fatigue,” as the price in September was tied by a thread to the five-figure mark and dropped below $10,000 as the month came to a close. He highlighted the severity of the yen drop owing to the larger retail crowd in Japan, compared to the other countries,

“The retail traders are finding it hard to make money and have taken a step back. We are observing this trend for many markets and it probably affected the Japanese market more as it has a larger retail base.”

In comparison, there has been movement by traditional spot exchanges to hover into the growing derivatives market because of the slow performance of retail trades. Ong added that in times of a slump such as this, exchanges “are forced to increase Average Revenue Per User [ARPU],” and they do this by offering either derivatives products or by allowing margin trading.

With Bitcoin’s price hinged at the $8,000 mark and no indication of a climb towards the fifth heaven on the horizon, investors are quite apparently moving to Futures. Seen as a gambling haven by some, as a red herring of the spot market by others, the Bitcoin Futures market is certainly proving to be an important facet of the market, albeit only from an investment standpoint.

Regulated and unregulated, the volumes are soaring, and so is the market demand. From the CME with its controlling method of trying to tame Bitcoin, to the brazen approach of Arthur Hayes’ BitMEX with its x100 leverage, the popularity of BTC Futures is immense. Long positions are increasing on the CME, BitMEX’s 24-hour volume is rising, Binance and OKEx have listed Futures, and the overall Futures market is gaining ground on its spot counterpart.

Will the spot market remain in a plateau while the derivatives market takes off? Unlikely, given the way the cryptocurrency market moves.
Andy Cheung added to the optimistic sentiment by stating,

“Given enough time, when more and more quality projects make solid progress, the spot market will come back as people regain their confidence.”

Could Bakkt become the Monarch Butterfly of the Bitcoin market?

Bitcoin crashes by 7% in an hour; breaches immediate support