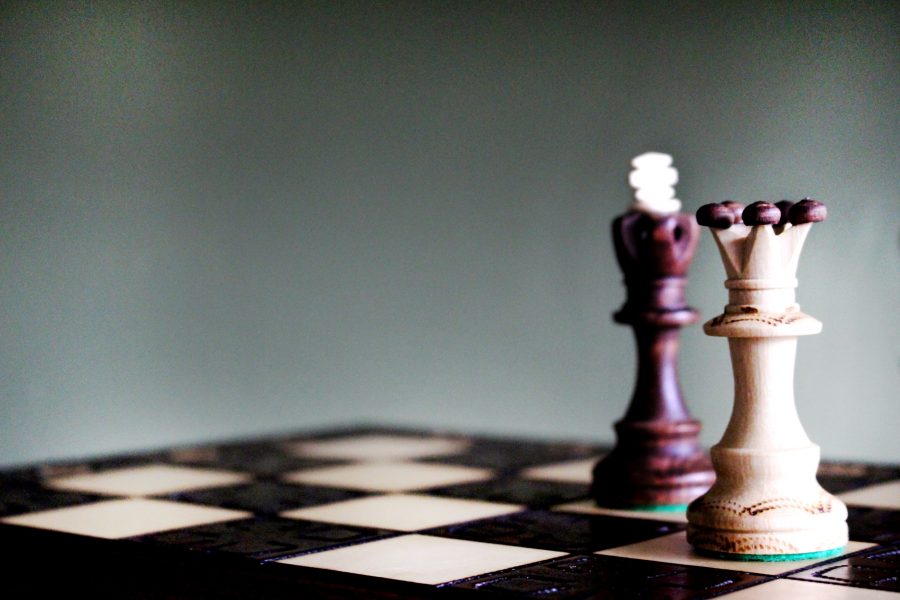 This is no David and Goliath story, and neither is this a tale of the underdog exceeding expectations and coming out on top. This is perhaps, the story of two equally capable giants going head-on in their journey to be ‘The One.’

More often than not, in a nascent market that has a massive future, the first mover has all advantages. The first one that grabs the opportunity of promising technology and builds on it tends to remain a big player. Take for example, Google. Yes, there were many other search engines before Google, but Google made the best use of ideas from the failed enterprises and look where it is now. The same can be said of Amazon.

However, what’s important is that both these companies have gotten so big that they engage most users in their respective sectors. Often, the newcomers fail to rise above their competitors. This is why the U.S. has Antitrust laws and statutes that protect competitors and consumers from predatory business practices. Since the cryptocurrency ecosystem hasn’t particularly matured, there is still time for already present and incoming incumbents to take a shot at becoming the giants of cryptospace.

“Cut-throat” is the most appropriate word that can describe an atmosphere that includes both businesses and competition. The DotCom era or the current e-commerce market can be called cut-throat, then again, so can the cryptocurrency ecosystem. The technology that cryptocurrencies bring to the table is budding, yet has the potential to be bigger than the DotCom bubble or as big as the stock market. Hence, businesses rising in this ecosystem are also levied by the same rules.

BitMEX and Binance can be rightly called as the first movers or the first to take necessary steps and/or precautions or ideas to not only sustain, but grow over time. These companies are giants in their particular areas of expertise.

On one hand, BitMEX has dominion over Bitcoin trading, especially with its famed and proprietary perpetual contract. Binance, on the other hand, rules as one of the top cryptocurrency exchanges in the world with respect to spot trading. Apart from being able to seize the opportunity, Binance has kept itself in the lead by implementing outlandish ideas. It has more than 500 cryptocurrencies listed on its platform. Out-of-the-box thinking has, in a way, kept Binance on the leaderboards.

Both Binance and BitMEX dominate their respective fields without a doubt.

It is sufficiently clear that there is a huge disparity in statistics between Binance and/or BitMEX ,and their respective competitors.

The important question to ask here is, “What if Binance wants to take over BitMEX’s target group?” It’s not a wrong thing for Binance to think about it or even plan to do so. It’s just how businesses work.

So, is CZ really hoping to be a competitor to BitMEX and is it hopeful of overtaking it?

CoinGecko’s Bobby Ong said that the spot market is saturated and that moving to new features is just a normal step for exchanges. Speaking to AMBCrypto, Bobby Ong said,

“The spot market is extremely competitive as well and is saturated with many players with fairly non-differentiated products… Another reason why many exchanges are looking at derivatives market is because there has not been much growth in new retail traders coming in to trade the spot market. To maintain revenue/profits in a falling market, exchanges are thus forced to increase Average Revenue Per User (ARPU) and one can do so by offering margin products and derivative offerings. “

It is true however, that BitMEX seems to already know what’s transpiring as it called out Binance when it announced the launch of its Futures platform in September.

Congrats on the Testnet Futures launches @binance. Glad to see you enjoyed reading our documentation as much as we enjoyed writing it! pic.twitter.com/lLzcLcX6t4

CZ acknowledged the fact that it was copied and said that it would be fixed.

Looking at Binance’s geo-block announcement in June 2019, there seems to be a pattern. In 2017, BitMEX announced that they would be geo-blocking few countries; it also mentioned that BitMEX holds all rights to close any of the accounts and liquidate any open positions of the users trying to access from the prohibited countries. In fact, the disclaimer is still visible on the official BitMEX page footer.

Binance seems to have taken a page from BitMEX’s playbook as it has enforced a similar geo-block on its users due to the then-impending regulatory climate. Bobby Ong confirmed the same as he said that users could “theoretically access Binance by using a VPN.” Moreover, users without KYC can still access Binance, but they will have a daily withdrawal limit of 2 BTC.

Theoretically, the numbers [trading volume] for Binance did not go down after the geo-block was announced or enforced, which is apparent from the graph seen below. 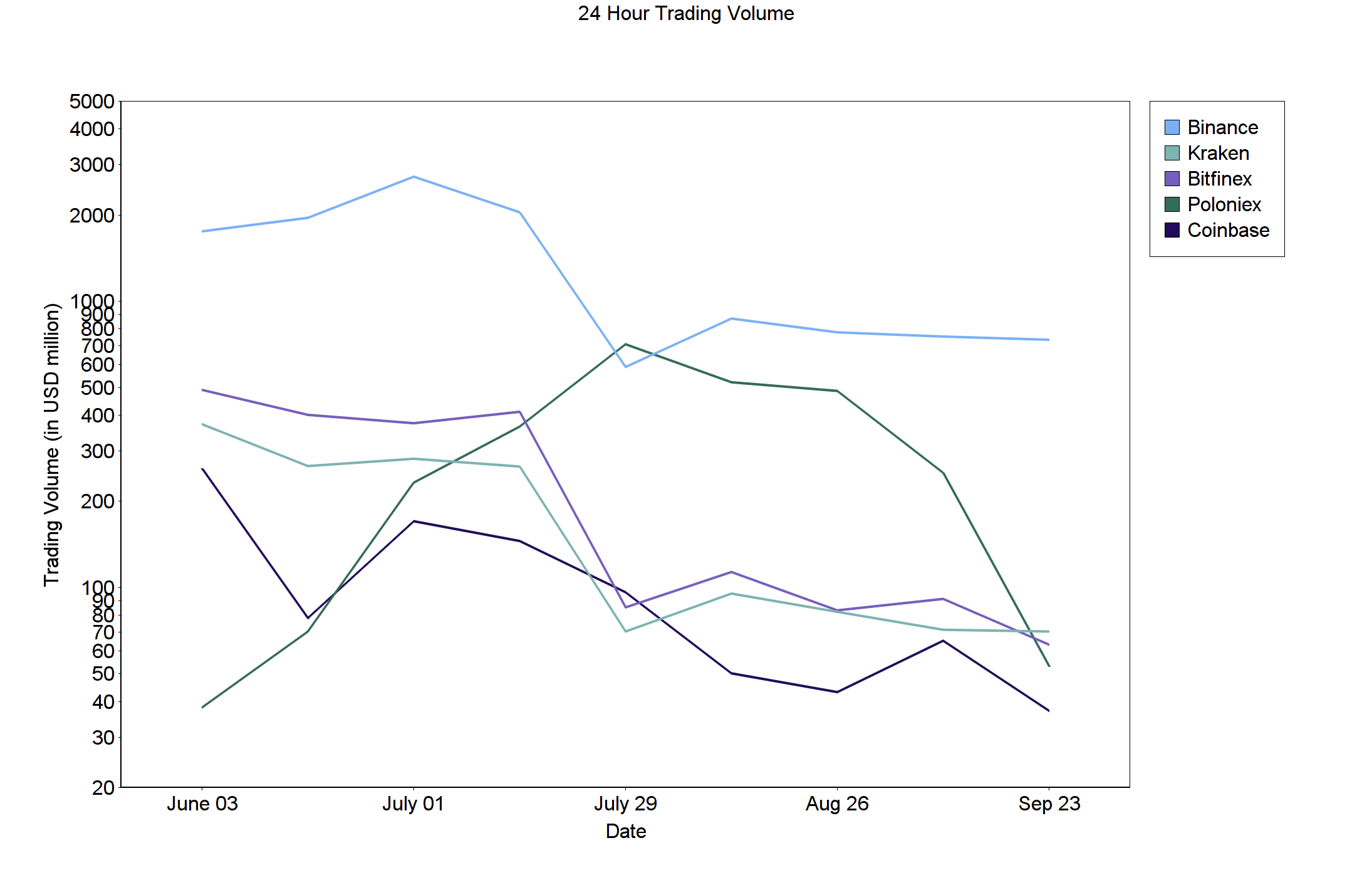 Seeing how Binance gets approximately 9-12% of visitors from the US, geo-block should have affected Binance’s trading volumes. However, as seen in the above chart, it did not. 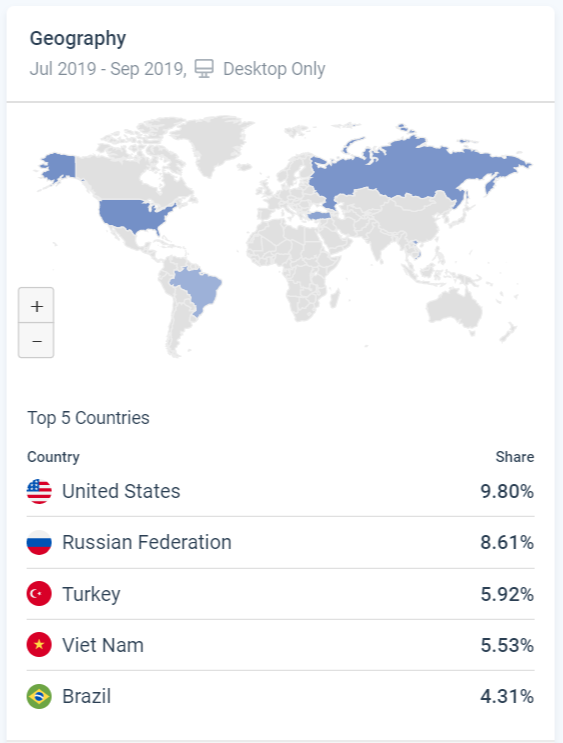 From an exchange point of view, it is of the utmost importance to follow regulations set up by financial watchdogs. It is also necessary to make sure that the exchanges do not lose their userbase in doing so. Binance is doing the same with their concerted business plans ever since they announced the geo-block. On the off chance that Binance loses users, it has already prepared strategic plans in place to cope-up. These plans are already in place: Binance Futures, Binance US, Binance margin trading, lending, staking, and the launch of their stablecoins, among many others.

Binance doesn’t look like it is playing games; it plans to be the best in the space.

BitMEX has already found its niche and it is sticking with it, even as other derivatives platforms like Deribit, Bybit and others are popping up trying to contend for its throne. BitMEX hasn’t announced anything huge about any updates, but it still has room for improvement as Bobby Ong stated,

“Bitmex currently does not offer Options. There have been reports that they are planning to offer but they have to be quicker to launch it otherwise exchanges such as Deribit will run away with the market – they are now the clear leader in the nascent crypto options market.”

Binance’s CZ refused to comment on the “competitors/peers, and politics,” but mentioned that they were focused on building products for the community.

AMBCrypto has contacted BitMEX’s Arthur Hayes for a comment on the matter.

Binance and its Neverending Barrage of Ideas

Binance Futures faced flak when it was first launched, some even ridiculed it. However, none of that mattered as it has performed splendidly since. Binance has already climbed up the leaderboard for Futures and has reached the 6th rank. Three spots away from taking over its competitor, BitMEX.

Moreover, Binance Futures’ trading volume surpassed that of spot trading on 12 October, which was pointed out by CZ on Twitter. For an exchange that is planning to take on the most popular exchange at its own game, it doesn’t really get better than this. Although CZ refused to talk about competitors and stuck to commenting on building products and services to make the ecosystem better, it is clear that this is more than a race. It’s an opportunity to be one of the FAANG’s of the yet-to-be Trillion-dollar industry.