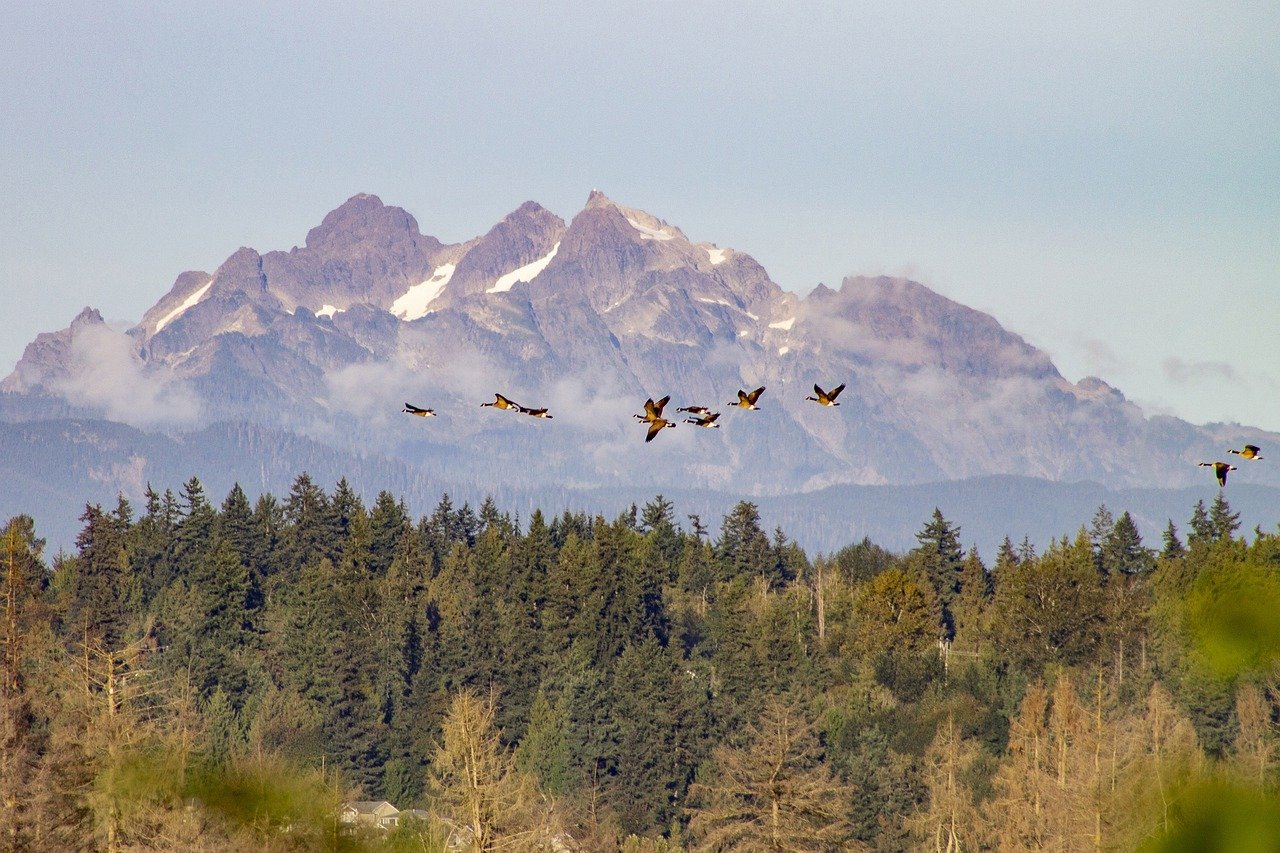 Despite its 10% gain over the day and being a top-performing asset, the bull market in DASH was likely to turn around soon, as key technical indicators hinted towards a price correction.

Binance Coin noted some bearishness on the charts, while also maintaining the possibility of a positive price reversal. Tezos, on the other hand, was likely to be bearish for a few more trading sessions. 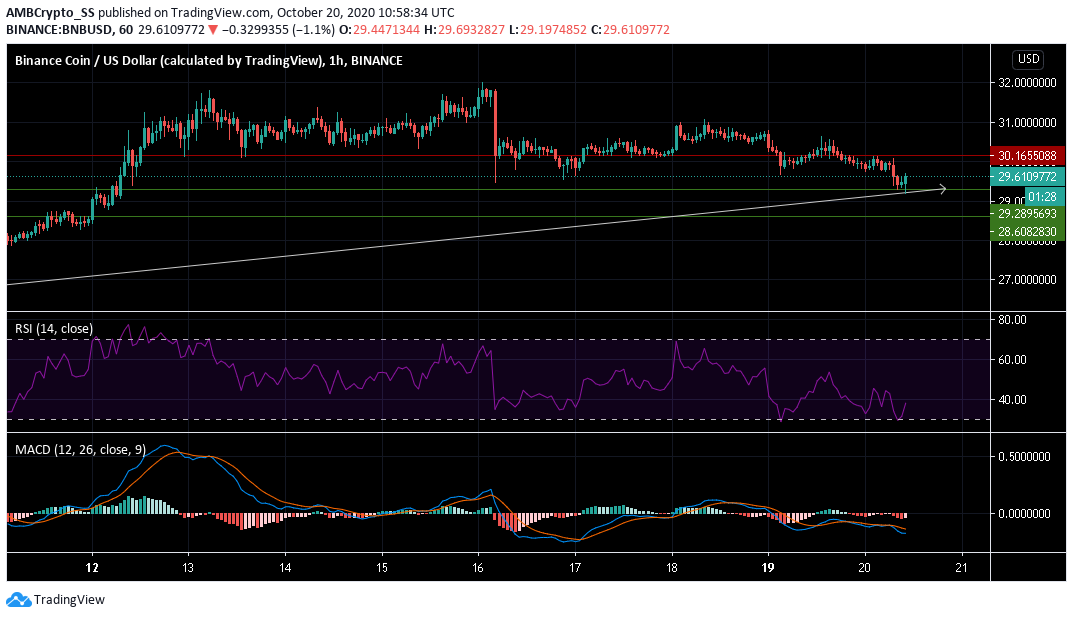 The Binance Coin market at the time of writing was undergoing a period of brief price correction. The digital asset continued to maintain an uptrend.

The same was also reflected in the MACD indicator as it made a bearish crossover, with both the MACD and signal lines below the zero level.

Given the overall uptrend, a reversal could be seen soon, as the Relative Strength Index moves back up. However, RSI was well below the neutral 50 level, predominantly maintained a selling pressure, despite showing a slight rise.

For the following trading sessions, the outlook in the BNB market is likely to be slightly bearish, until bulls regain strength at the $29.289 level of support. 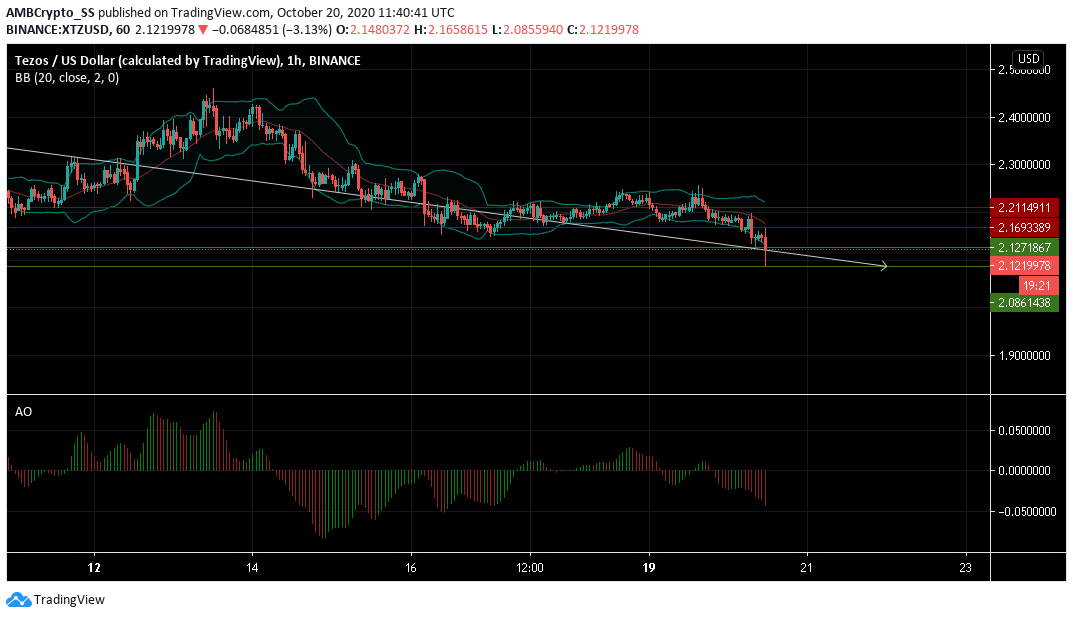 Tezos at the time of writing was trading at $2.121. Since yesterday, the digital asset had recorded a loss of almost 5% on its trading chart.

Awesome oscillator displayed a bearish setup below the zero line, with red closing bars. This was indicative of bearishness visible both in the short- and long-term price trends.

The divergence seen in the Bollinger bands also hinted towards a spike in the volatility levels. In a bearish price move, the XTZ candles were seen along the lower bands and dived below the $2.127 support levels. 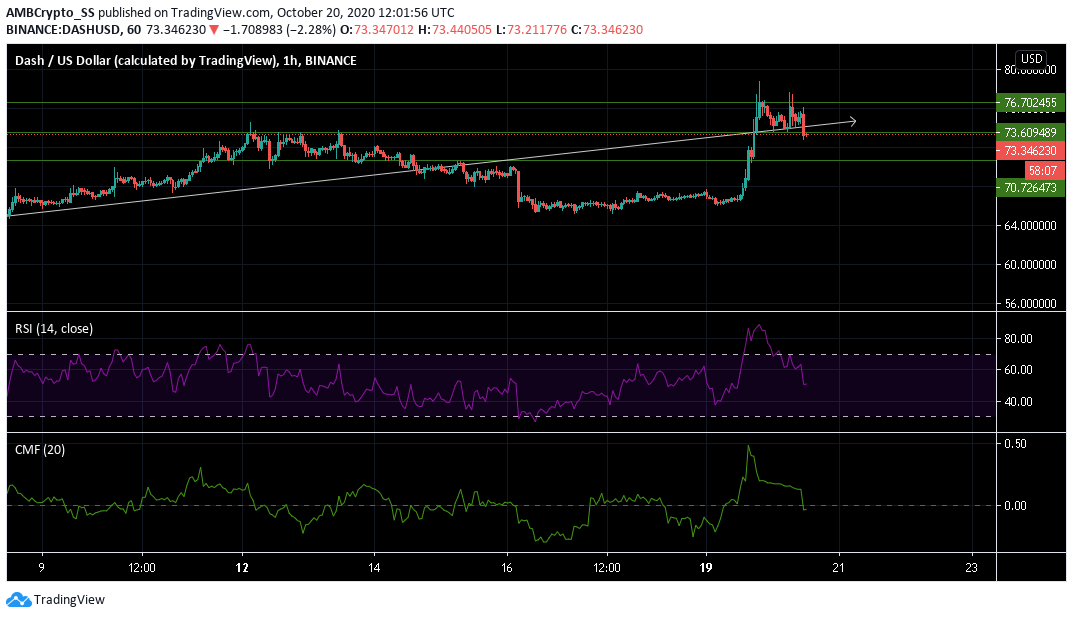 In a significant price surge, DASH performed better than most alts during its trading session today. The altcoin jumped displaying a single day price recovery of more than 10% over the last 24-hours.

Despite this, the Relative Strength Index was seen recovering from its recent journey to the overbought zone. The RSI marker quickly dived below the neutral 50-zone signaling a rise in selling sentiment.

The Chaikin Money Flow indicator also revealed a bearish sentiment as the CMF marker rested below zero, an indication of capital leaving the DASH market.

The bearishness captured by the two indicators further coincided with the price dropping below the trendline and the $ 73.6 level of support. A failure to maintain prices above this support could mean a few more bearish sessions are yet to unfold.

Ethereum 2.0: Should we start asking Real or Fake?