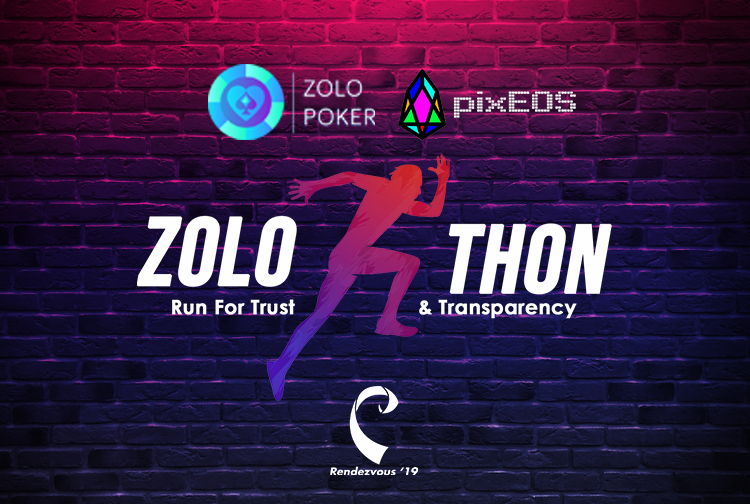 A blockchain-driven gaming platform Zolo Poker, is organizing a marathon in association with Rendezvous, IIT Delhi. Zolo Poker is one of the first gaming companies to have incorporated blockchain technology to build decentralized games. Zolothon – Run for Trust and Transparency is the opening event of Rendezvous’19, IIT Delhi, one of the biggest cultural fests organized in India. It is an initiative taken towards acquainting the Indian youth population with the innovative technology, blockchain, that has the capacity to change the face of business in the days to come.

The founder of Zolo Poker, Karan Dembla is on a mission to encourage and spread awareness among the Indian youth about the massive capacity decentralized blockchain system has to disrupt and change the international economic relations. The business structure that he proposes is just like the caption for Zolothon suggests – complete trust and transparency of transactions which can only be possible through the community-driven decentralized system like blockchain. And it is with that idea in mind that Zolothon has been organized.

“From industrialization which was started in the UK, to the development of automobiles in Germany and Italy, or even consumer internet, which was introduced by the US, every major step towards progress has come from the West. At the same time, these same countries would not have been able to invent any of those had it not been for the invention of the numerical 0 which happened in India. Since then India has been synonymous with culture, spiritualism, and non-violence but is never mentioned in the fields of technological advancements or economic growth.”

With the economy at a precarious position and unemployment at an all-time high, it is time that the people of India embrace new modes of business management. Karan lamented,

“It is unfair that when the rest of the world is aggressively entering the blockchain and cryptocurrency industry, in India we need to organize a marathon just to be heard.”

“Putting a limit to the blockchain will set us back for 40 years,” Tim Draper has already warned India.”

“In India, we have the cheapest internet compared to the developed countries and yet we have been unsuccessful in taking full advantage of that and incorporating blockchain. It is bewildering that having the most powerful means of economic change in our hands, the internet, and at such affordable rates we are still lagging behind the rest of the world.”

Karan, who is committed to making decentralized internet available to the world remarked,

“If we don’t bet on the blockchain when the world is moving towards decentralization, we will lose out on opportunities and unemployment will grow. A lot of investors globally are into blockchain and decentralized space.”

Even though the present government is encouraging digitization of industries, if it is not driven by decentralization and blockchain it won’t be enough. India harbors 1/5th of the total world population, making it one of the most lucrative spaces for business growth.

Deven Raj Kakkar, the community head of the Zolo Poker believed that future of business is creating self-sustainable community-driven businesses and that is what we are committed to supporting at Zolo Poker. Rishav Kumar, one of the interns for Zolo Poker, and a student of IIT Delhi got really intrigued by blockchain and helped in the organization of Zolothon in an association with Rendezvous’19, IIT Delhi.

Zolo Poker is an online gaming portal that hosts decentralized games through blockchain. The creators are not privy to or have access to anything apart from the mechanics of the games which is also coded and deployed on blockchains, making it impossible to manipulate the game outcome, thus ensuring trust and transparency.

Zolothon’s title sponsor pixEOS is a tokenized art gamification platform on EOS with massive traction as an early entrant in the EOS blockchain space. Fred Nogueira, the co-founder & CEO of pixEOS said,

“We’re really excited about Zolothon and glad to be part of this initiative. We had a great community reception back in Asia and we think the community will be stronger in India as well once the people are aware of what blockchain brings to the table. Dream of decentralized internet will be unfulfilled if India is not a part of this movement.”