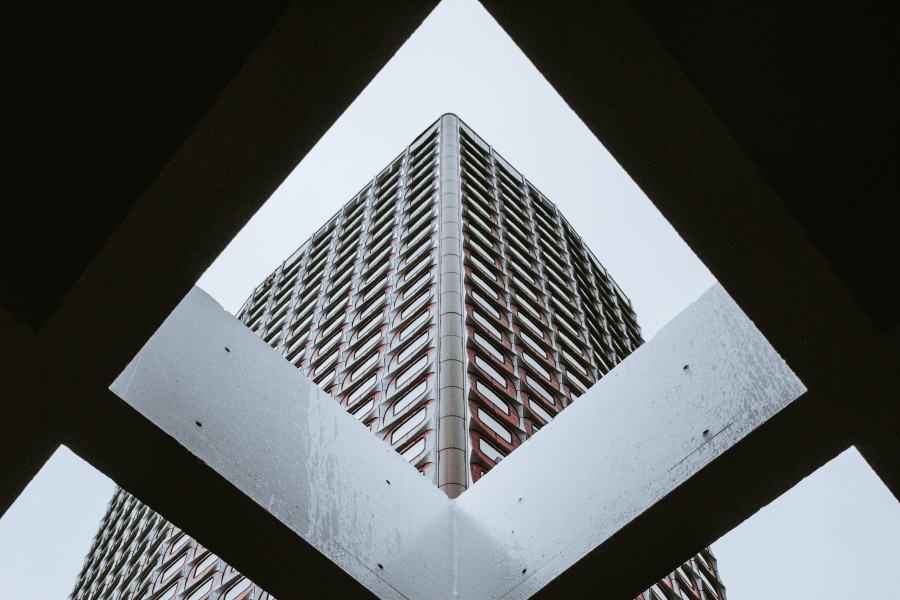 For the first time since late-September, XRP is in a bullish market, having finally risen above the $0.25 mark just days ago. The trend didn’t persist too long before XRP was pulled back down to the $0.225 level, where it is valued at the time of writing. CoinMarketCap showed XRP with a market capitalization of over $9.9 billion, with more than $1.5 billion worth of XRP traded in the last 24 hours. 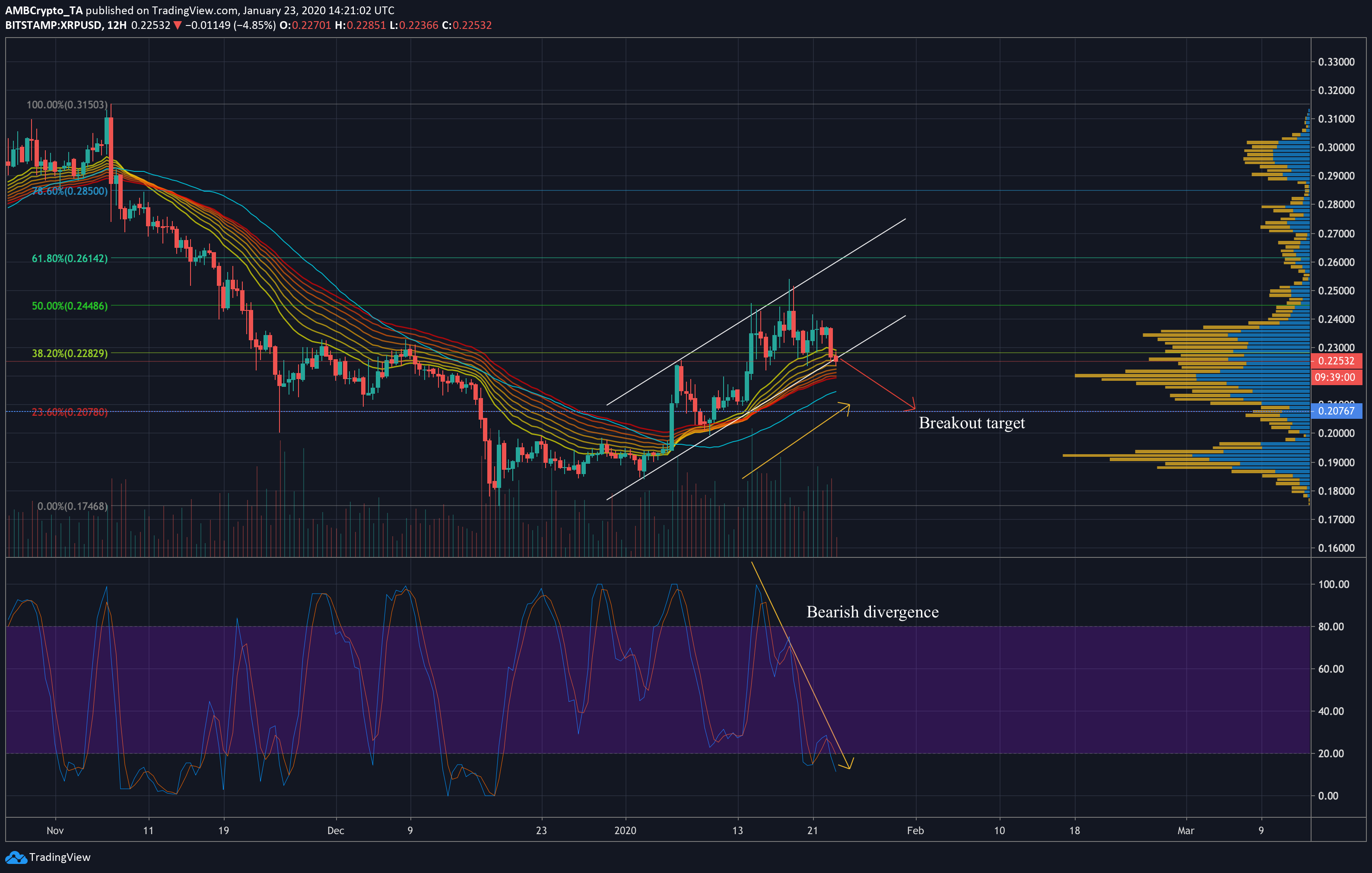 XRP has been moving through an ascending channel formation since the start of the year, with rising trade volume over the pattern period. These patterns are often continuation patterns, and considering XRP entered the pattern through a downward movement, it is quite likely the coin will move down in value over the next week.

Despite the 50-MA appearing under the price line, a downward breakout from the pattern is still more likely. The Stochastic RSI indicator displayed a bearish divergence, as the indicator created lower highs, while the price created higher highs over the same period of time. XRP also looked to be moving into the EMA ribbon lines, and since they look like they could converge soon, the ribbon lines may act as an additional resistance after the downward breakout occurs.

XRP is likely to move down to the $0.207 mark at the 23.6% Fibonacci retracement line in the next week or so. However, it is possible the 50-MA could move upward, serving as a support as the price bounces off it. This could lead to a correction back above $0.23, and possibly above $0.245. 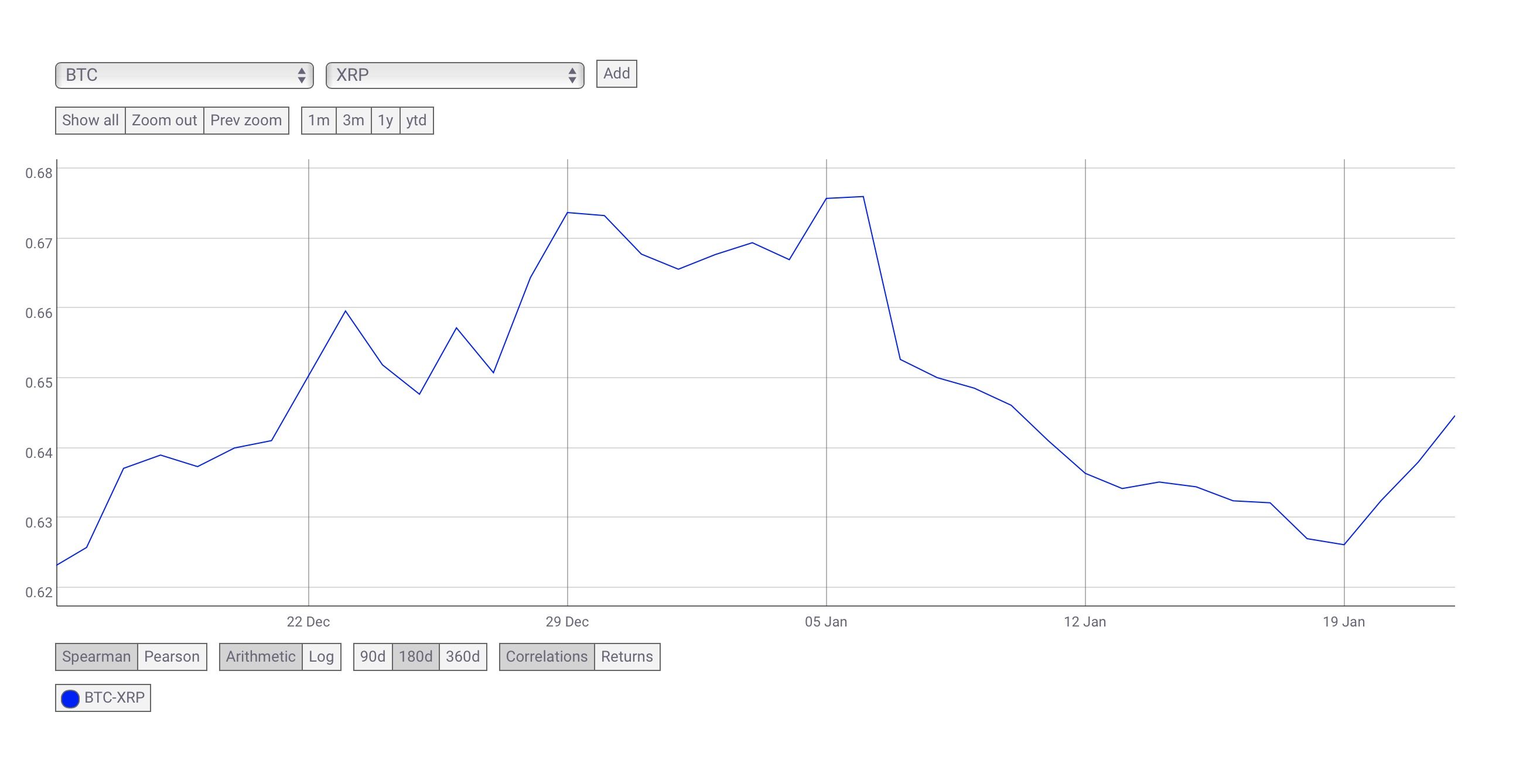 Blockchain data analytics firm, CoinMetrics shows XRP correlation with Bitcoin had been rising through the month of December. Within the first two weeks of 2020, however, correlation dropped by 4.5% from 0.665 to 0.635. However, Bitcoin correlation has been on the rise over the last few days, currently residing around the 0.645 level. Since BTC is projected to drop to $8000 by the end of this month, the rising correlation could increase the likelihood of a downward-facing breakout.

XRP is likely to break down from the ascending channel formation. Despite the 50-MA in place for a bullish movement, the bearish divergence indicated by the stochastic RSI indicator makes it far more likely that the coin will move downward over the next week. A downward breakout would likely see XRP pushed down the to $0.207 mark, at the 23.6% Fibonacci retracement level before February arrives.