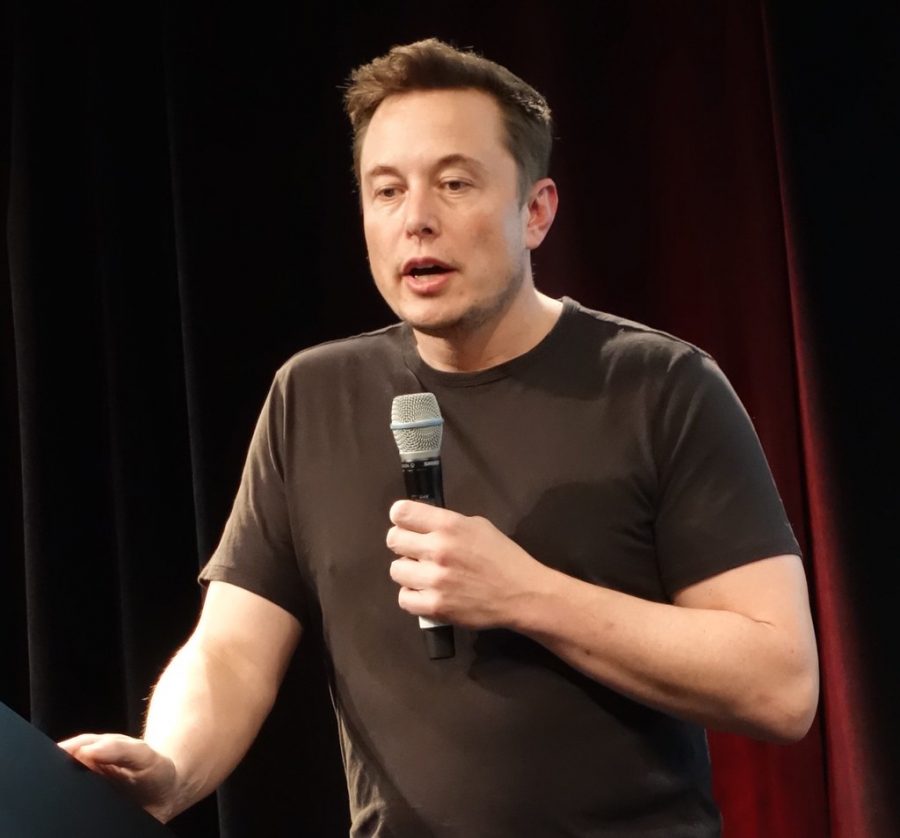 This is a satirical piece meant solely for entertainment purposes.

Months after Tron’s Justin Sun canceled his lunch plans with Warren Buffett owing to a case of kidney stones, Sun finally got his chance to sell crypto to the investment mogul at a private dinner on 23rd January. However, in a strange turn of events, AMBCrypto has learnt that Justin Sun’s charity dinner with investment mogul Warren Buffett was interrupted by someone not on the guest list – Tesla and SpaceX CEO Elon Musk. The 48-year old technology entrepreneur was escorted out of Omaha’s Happy Hollow Club after Musk refused to let the Berkshire Hathaway CEO have his dessert before he had been sold on the idea of Dogecoin.

The CEO of Tesla and SpaceX, Elon Musk, was ‘elected’ CEO of Dogecoin via a public poll back in April 2019. However, he had ‘resigned’ soon after his election.

While the Omaha Police Department is yet to comment on the matter, witness reports have been very revealing and give a clear picture of what transpired at the private country club. According to witnesses, Musk, who had been hiding in the restroom, accosted Buffett when he was heading for the loo.

“You gotta buy Dogecoin. Do the doge,” Musk was heard telling Buffett as the Chocolate Crème Brûlée was being served. The Oracle of Omaha, who had already gone 2 hours without his cans of Cherry Coke, politely refused. However, Musk refused to relent and took Tron CEO Justin Sun’s (Who had gone over to shill Tron to the maître d‘) place beside Buffett.

Following repeated attempts at asking him to leave, the former Dogecoin CEO was escorted out by police. However, not before Musk had asked restaurant customers to “Do the Doge” too. While the nature of police action against Musk is still unclear, the entrepreneur had a chance to respond online. He tweeted, 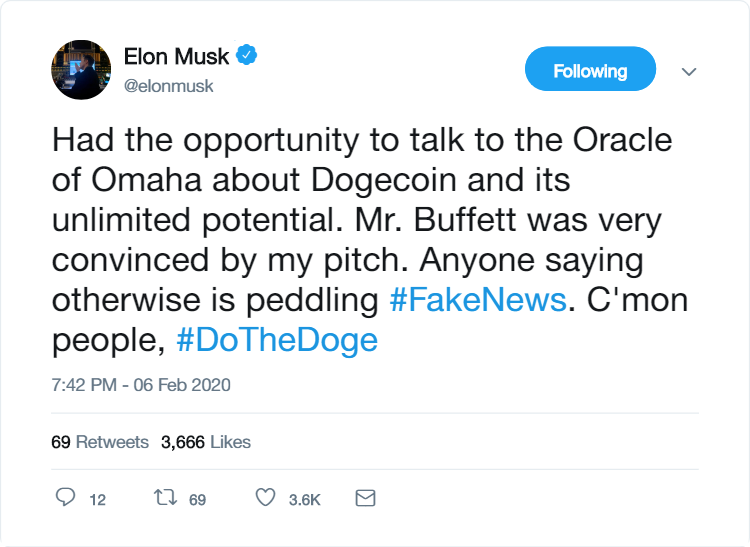 The cryptoverse was abuzz after news of what transpired at Justin Sun’s charity event with Warren Buffett broke out. Reactions were swift, with many popular crypto-proponents tweeting about the same. Tron CEO Justin Sun, the supposed prima donna of the aforementioned charity event, while avoiding any mention of the gatecrasher, thanked Buffett for the opportunity. He tweeted,

“Had a very short but insightful discussion on cryptocurrencies, TRON, stablecoins, TRON, U.S-China trade war and TRON, with @WarrenBuffett. Have successfully convinced him to invest in  cryptocurrencies. Hope to see Mr. Buffett again the next time I’m in the United States.”

This tweet was retweeted by the TRON Foundation and popular TRON-proponent Misha Lederman, the latter of whom also re-shared a tweet about TRON transactions exceeding those of Ethereum and EOS from four days ago.

If true, this is a critical development as Warren Buffett had once infamously claimed that Bitcoin is “rat poison squared.”

While it is unknown whether Warren Buffett would be inclined to meet Sun again, anonymous sources have told us that Buffett has asked all his subordinates to leave negative reviews for Happy Hollow Club on Yelp.com.

Binance Charity Foundation’s Helen Hai, another invitee to the charity lunch, also appreciated the opportunity to talk to Warren Buffett. She said,

“Hopefully, we have done our bit to clarify some of the misconceptions surrounding Bitcoin and cryptocurrencies.”

Justin Sun’s other guests were much more mellow in their evaluation of the afternoon, however. Litecoin’s Charlie Lee tweeted a tentative, “Okay, that happened,” while eToro’s Yoni Assia complimented Happy Hollow Club on its choice of wine and cheese and the private club’s golf facilities.

The guests weren’t the only ones to react to the incident, however. Bitcoin permabull and Fundstrat’s Co-founder, Thomas Lee, tweeted,

“This charity event has to be the most bullish catalyst for Bitcoin this year. Expect BTC to break past its immediate resistance and rally by 250-300%. Bitcoin to reach $50k by end of 2020. You heard it here, folks. THIS TIME I AM RIGHT!”

U.S Presidential candidate for 2020 and software pioneer, John McAfee, was one of the few to openly welcome Elon Musk’s brazen actions. He tweeted, 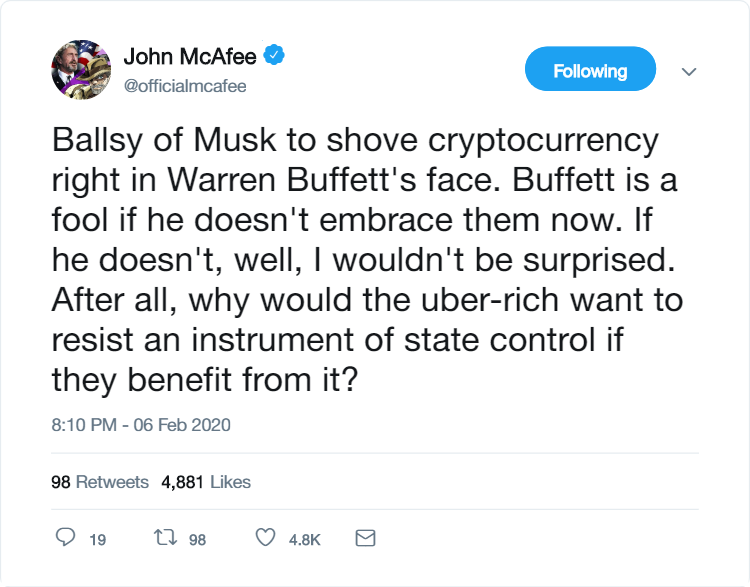 McAfee also informed his followers that he is “going dark” for a few days, claiming that he is being tailed by government agents in SUVs. However, he assured everyone that he’ll be alright. “Dissent will not be silenced,” he added.

Popular economist and crypto-critic Nouriel Roubini also got into the act and commented on the charity dinner. He tweeted,

“Elon Musk’s behaviour at a posh, private country club is the crypto-industry in a nutshell. It’s an industry where thugs such as Arthur Hayes are in business. I hope Warren Buffett wasn’t swayed by crypto-fanatics.”

However, perhaps the simplest response came from the target of Elon Musk’s affections: Dogecoin. The meme-coin’s official Twitter account tweeted,

Bitcoin is going to storm through the ‘altseason’