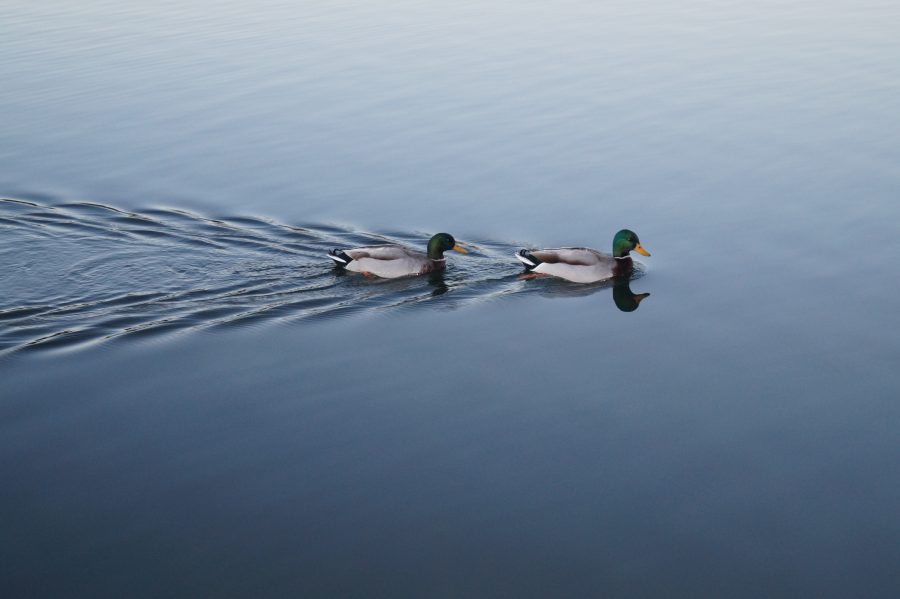 Directly or indirectly, Tether has helped Bitcoin gain traction and popularity in mainstream media. It has helped millions, if not billions, gain access to Bitcoin. Even Satoshi Nakamoto, the brains behind Bitcoin, couldn’t have possibly predicted this unprecedented market share that Tether has now captured.

Tether helped Bitcoin during a crucial time. The adoption of new technology isn’t easy and the same can be said about Bitcoin. When Bitcoin was getting famous among cypherpunks, dark web, and tech-enthusiasts, Tether was a much-needed on-ramp for people to get their hands on Bitcoin. Essentially, there was a symbiotic relationship between Tether and Bitcoin during the early days. Tether helped Bitcoin with adoption and USDT became the go-to stablecoin.

Fast-forward to a decade later, Tether enjoys a monopoly in the stablecoin market, with over 80% of the market share in its pocket. Tether’s share has grown to such an extent that its trading volume now surpasses that of Bitcoin. Bitcoin piggybacked on Tether in the early days. However, the tables have turned.

More often than not, there are always conspiracies around companies that have grown too big. This doesn’t necessarily mean that they have to be true. With a massive role as the one Tether plays, there are bound to be rumors. Speculations are rife that Tether’s biting the hand that fed it. Tether minting USDT to manipulate the price of Bitcoin and other cryptocurrencies is one such long-standing rumor and speculation.

“I don’t know if it’s true that Tether manipulates markets, though clearly I believe it to be a reasonable concern. I want to see their books, and until they open them for us all to see, no one knows.”

There are three different papers coming to a single conclusion from their hypotheses that Tether’s USDTs are pushed and not pulled, meaning, Tethers are printed without actual demand and hence, it makes Tether minting, supply-driven. This leads to artificially inflating the price of Bitcoin and other cryptocurrencies for personal gain.

Although there have been people debunking John Griffin’s paper, these papers claim that Tether’s USDT issuances were supply-driven.

The following steps were involved in the analysis done by AMBCrypto of BTC’s variation, with respect to Tether prints.

The table below gives a summary of the amount printed over the years and the times BTC has correlated with Tether issuances. 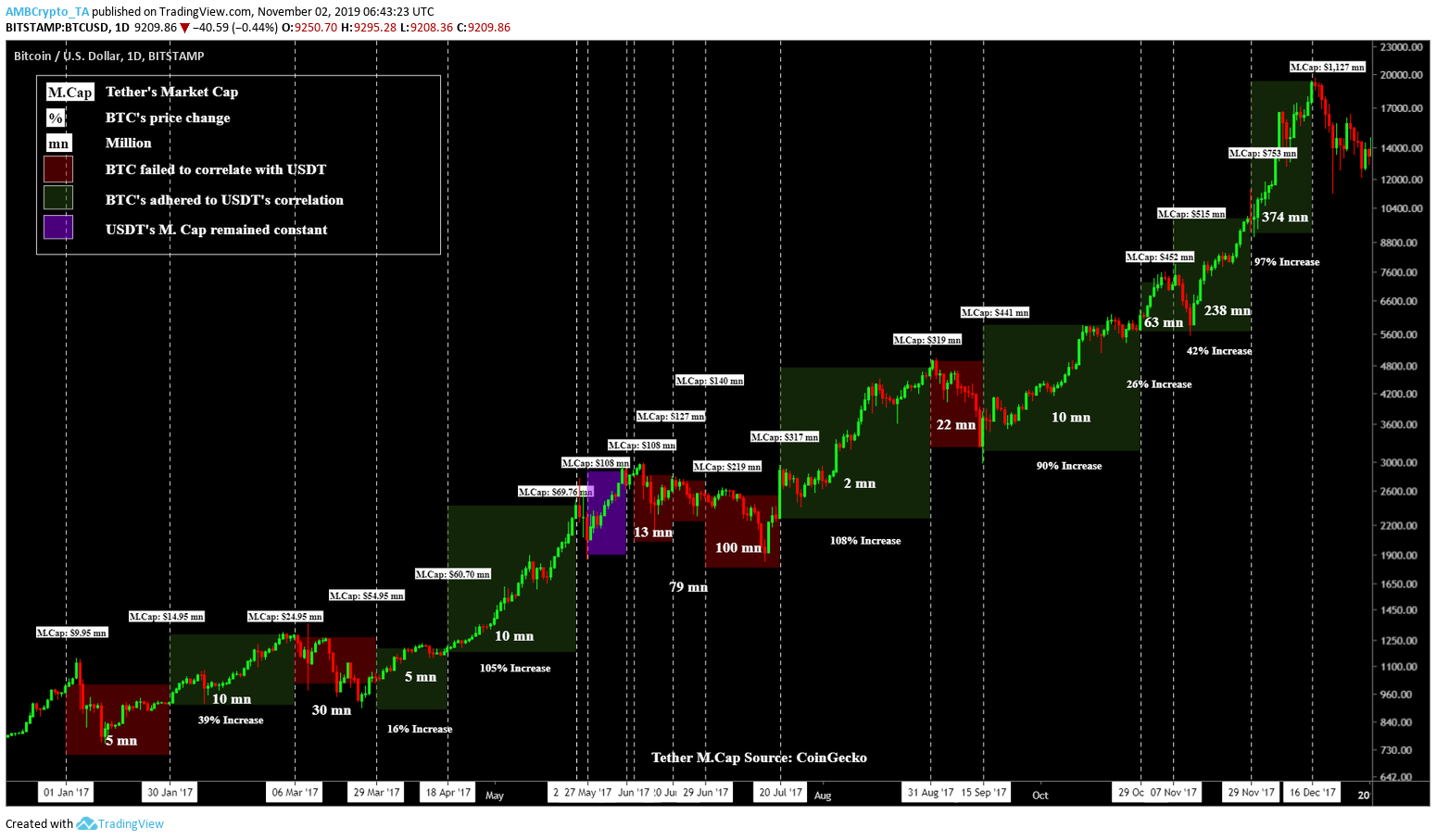 For the above, the total increase in market cap for Tether was about $1.4 billion, i.e. the market cap of Tether increased from $9.95 million to $1.47 billion in 12 months. The 2017 Bitcoin rally is contentious, mainly since many believe that this was when Tether’s alleged manipulation of BTC was the highest. Without manipulation, BTC would have never reached $20,000, they say.

“If the community banded against Bitfinex in 2017 it likely could have been resolved and used as an example of self-regulation/policing the community. Would have been really positive for the industry…. Sadly, that didn’t happen. Community embraced the fraud because they thought they’re all getting rich.” 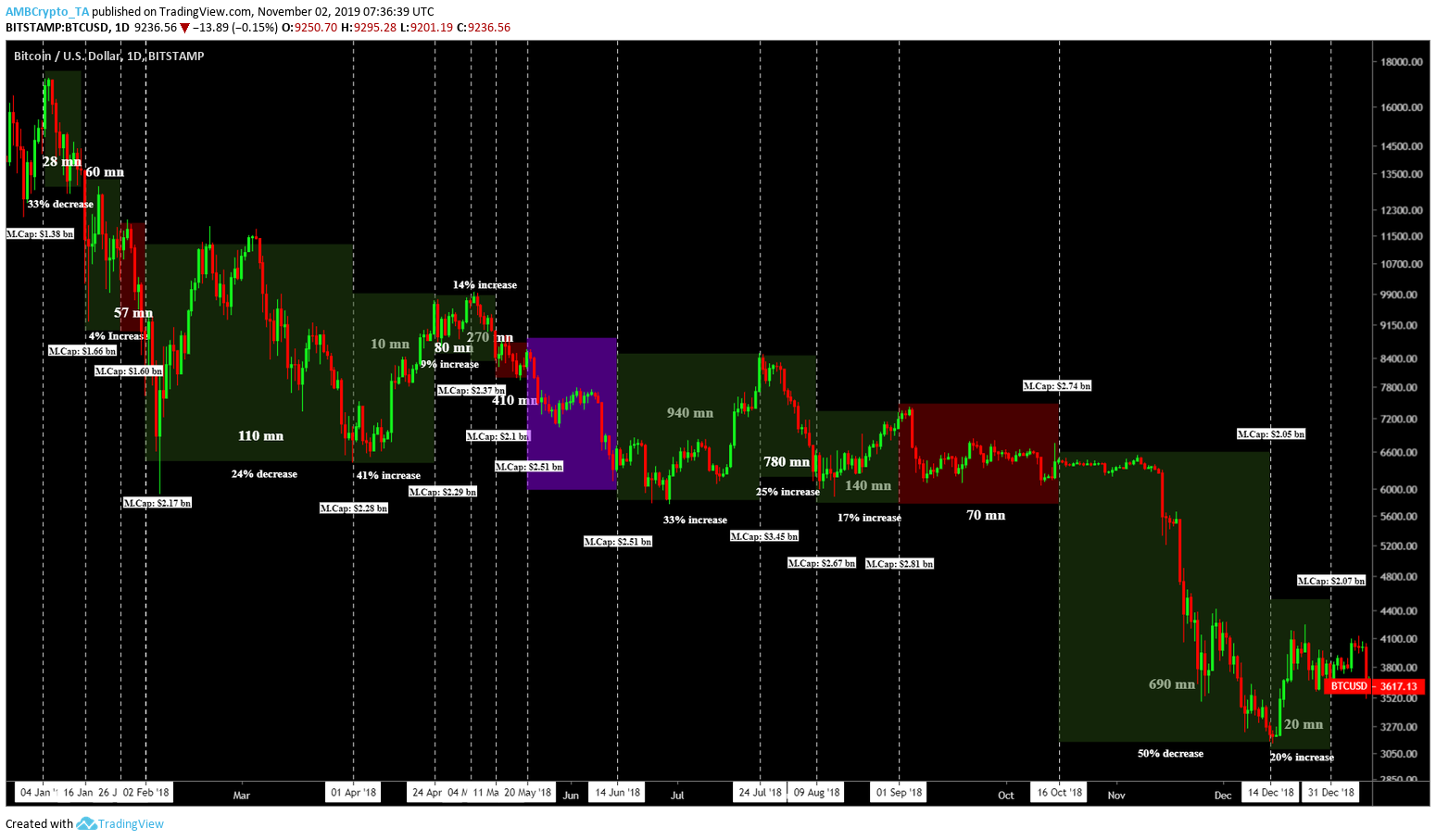 In 2018, which was the bust cycle after the exuberant 2017 rally, BTC’s correspondence to Tether was the highest. Over 15 instances, Bitcoin’s price rose 11 times when USDT was printed i.e., about 73.33% of the time. Only $600 million worth of Tether was printed during this time. 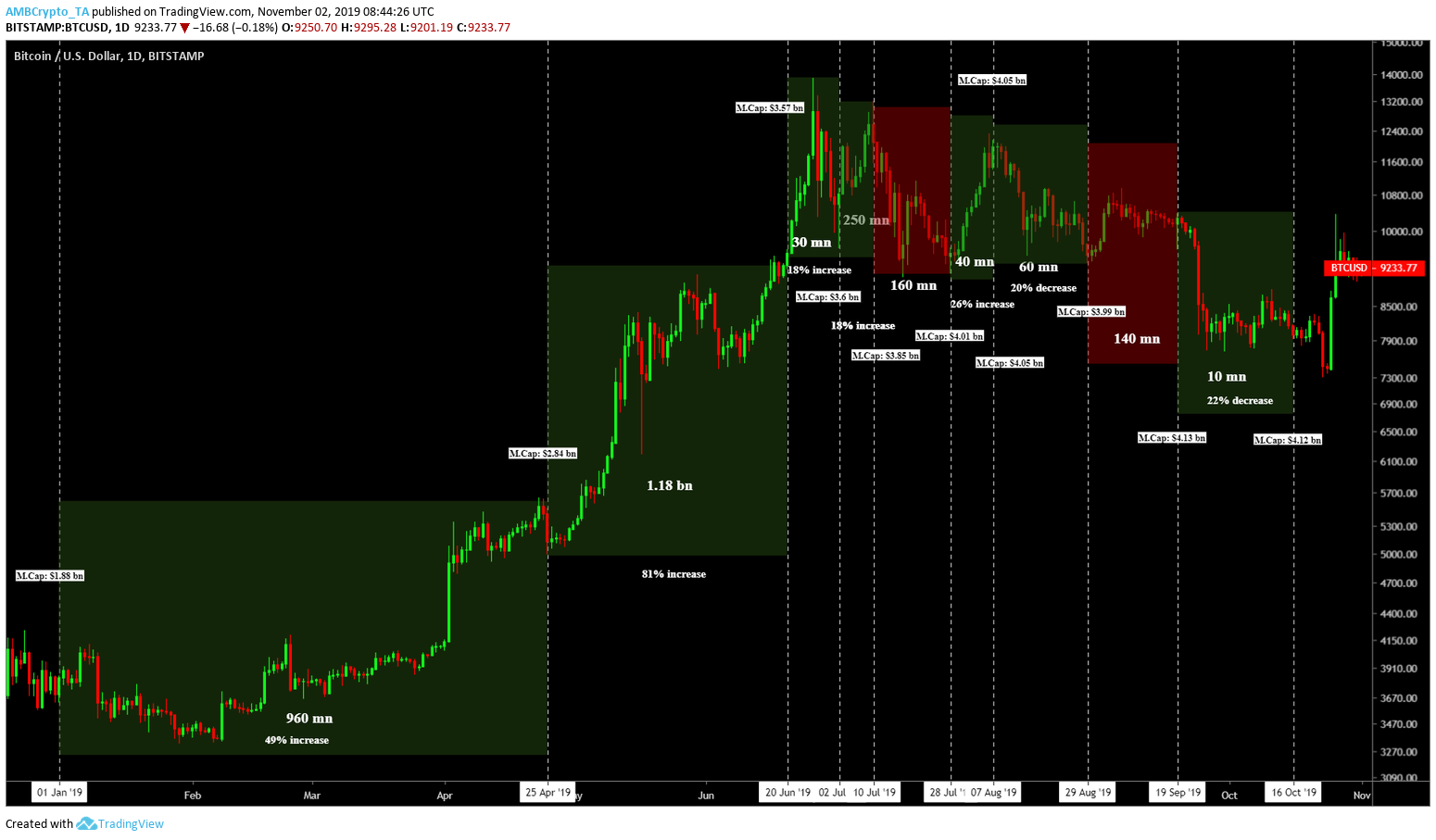 2019 has been a tumultuous year; the first half was amusing due to the sudden rally from April to June, one that made most believe that the bottom was in and the bull rally had begun. Contrary to the popular belief however, BTC did a 180 and started collapsing by the end of June until late October.

Speaking to AMBCrypto, Co-founder and CEO of Blockstream, Adam Back, opined that Tether’s market manipulation allegations are “conspiracies,” as he added,

“It’s causation not correlation: before Bitcoin price can go up people need fiat to buy with, and so if you had visibility of exchange balances, you would see they balloon before a price run-up.”

Ever since the 2017 bull run, speculations of market manipulation by Tether have been creeping out of the ground like earthworms after the first rain. The community has gathered bits and pieces of information that seem bad, but not on a large scale. However, put it together, and it looks damning for Bitfinex and Tether. Some of these tiny pieces of information include,

The list goes on, however. Adding these allegations to the NYAG case, it looks really bad for Bitfinex and Tether, regardless of the validity of these rumors.

“Tether has failed to live up to the expectations that they themselves have set up… Tether will have to have its day in court.”

He explained that Tether’s role in the ecosystem was “critical” and that “Bitfinex could easily have manipulated the markets more effectively *without* issuing a transparent coin like Tether.

However, he also summarized that,

“Academic studies have shown that there’s a correlation between Tether movements and market manipulation, and the NYAG showed that there were periods of time when Tether was misadvertised as having full reserves when it was significantly short. We all very much hope that this lawsuit can shed some light on what happened, and help turn the Tether management more transparent and accountable.”

What’s interesting are two important coincidences pointed out by the community. 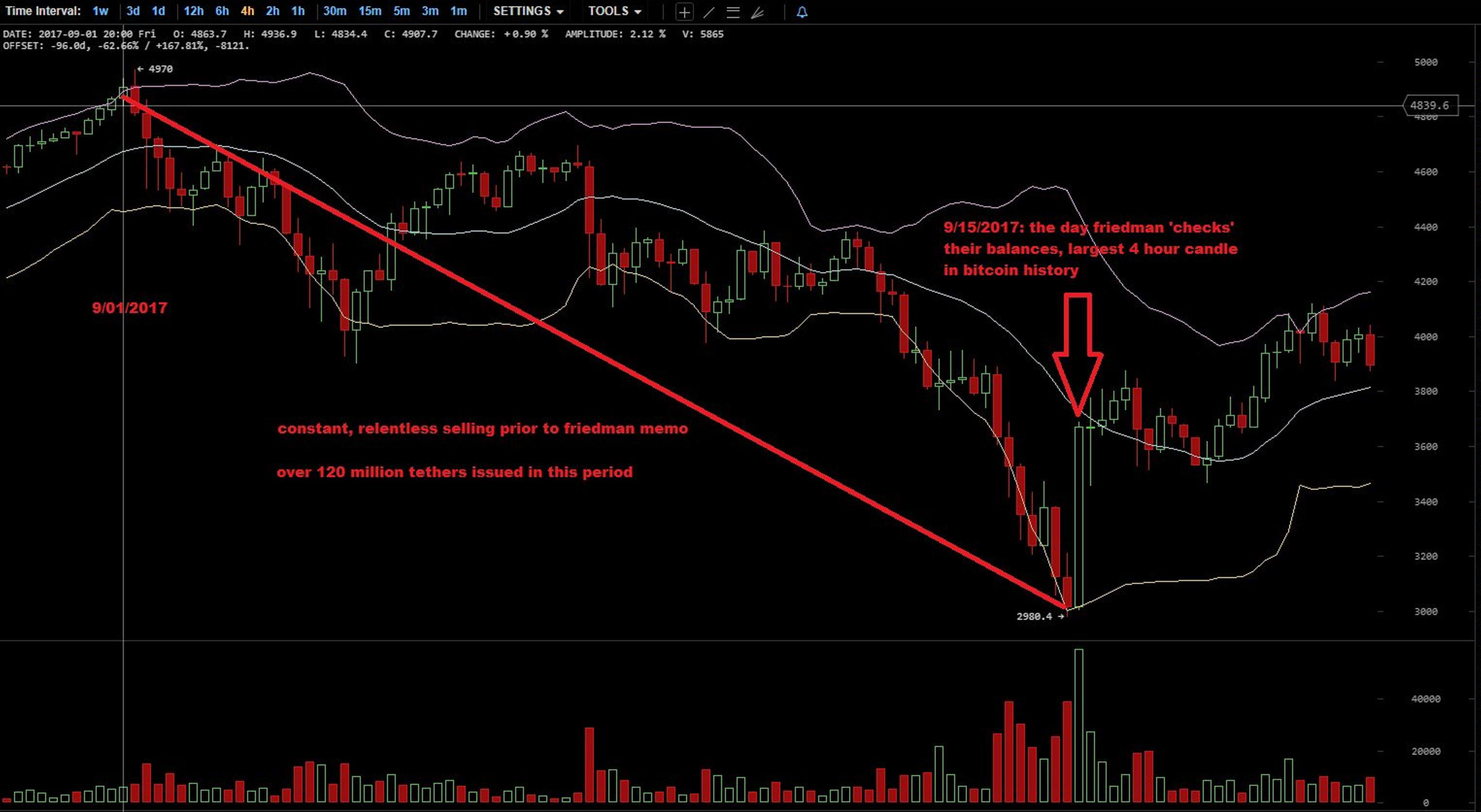 Adam Back had a much-defined opinion on the matter as he added,

“People can tea-leaf gaze and cook up conspiracy theories, but the $4.4bil the NYAG agrees is in tether’s bank seems to disagree… If tether removed transparency maybe the conspiracy theorists would move on to accusing exchanges that their fiat balances were “printed to manipulate” without receiving wire transfers.”

The End, or the Beginning?

According to Tether Report and John Griffin’s paper, between 2017 and 2018, Tether printing moved Bitcoin’s price approximately 50% of the time. The same was also observed in the aforementioned analysis. However, for 2018, BTC’s correlation with Tether printed rose to 73% and 77% for the elapsed 10 months of 2019.

The analysis also points towards Tether’s rampant printing of more USDT on different platforms [Omni, ETH, TRX, EOS, Liquid], especially in 2019. This comes in a time when Bitfinex and Tether are being closely monitored by the NYAG and the CFTC. Additionally, there is a class-action lawsuit that was filed on them by Roche-Freedman LLP recently. The key takeaway from this could the printing of millions of Tether at key psychological levels, something which begs the question, “Is Tether really demand-driven?”

“… this really is just tip of the iceberg, the more you dig the more you realize the whole thing is a giant cartel. About 20 people control everything in bitcoin and there’s nothing decentralized at all about it. If bitcoin was decentralized then bitfinex going under would be a nothing-burger and people wouldn’t be rushing to defend them and bail them out.”

Tether is an entity that has grown far too big to fail. Some may liken it to the Lehman Brothers of the traditional world, while others may draw similarities to Facebook or Google of the DotCom era. This take completely depends on the person’s view of Tether. Over 80% of the stablecoin market is dominated by USDT, while others like USDC, GUSD, etc. are fully regulated and far more transparent as compared to Tether.

AMBCrypto is awaiting a response from Bitfinex on the matter. The article will be updated accordingly.

This article was co-authored with Namrata Shukla