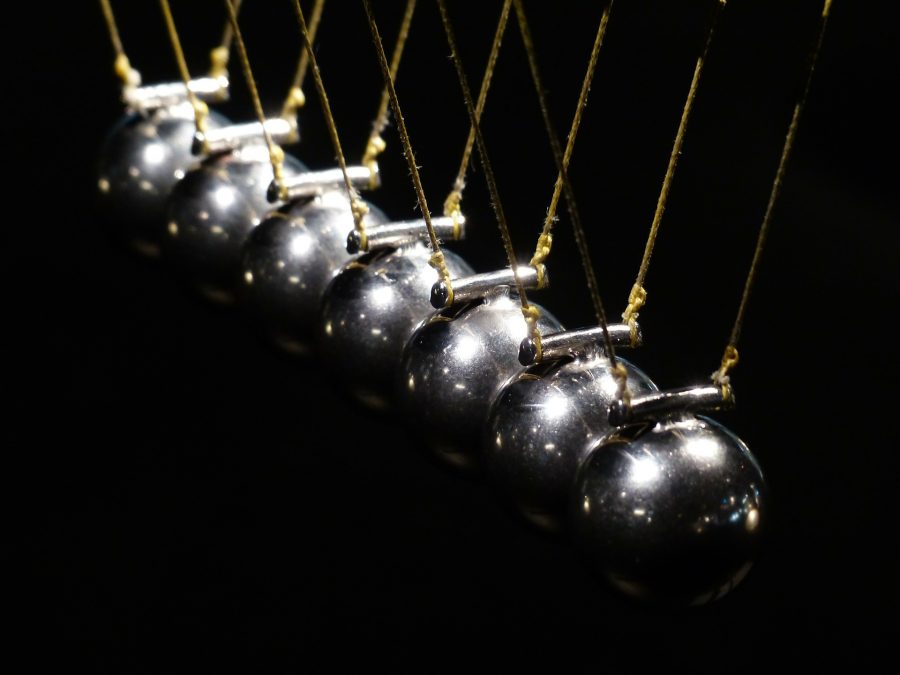 Ethereum recorded a significant rise on 25 October, registering a growth of over 14 percent. However, the 2nd largest crypto-asset has been going through a consolidation phase since. Over the past week, ETH has been moving sideways between the range of $180 and $190 and at press time, its valuation was recorded to be $186.65. 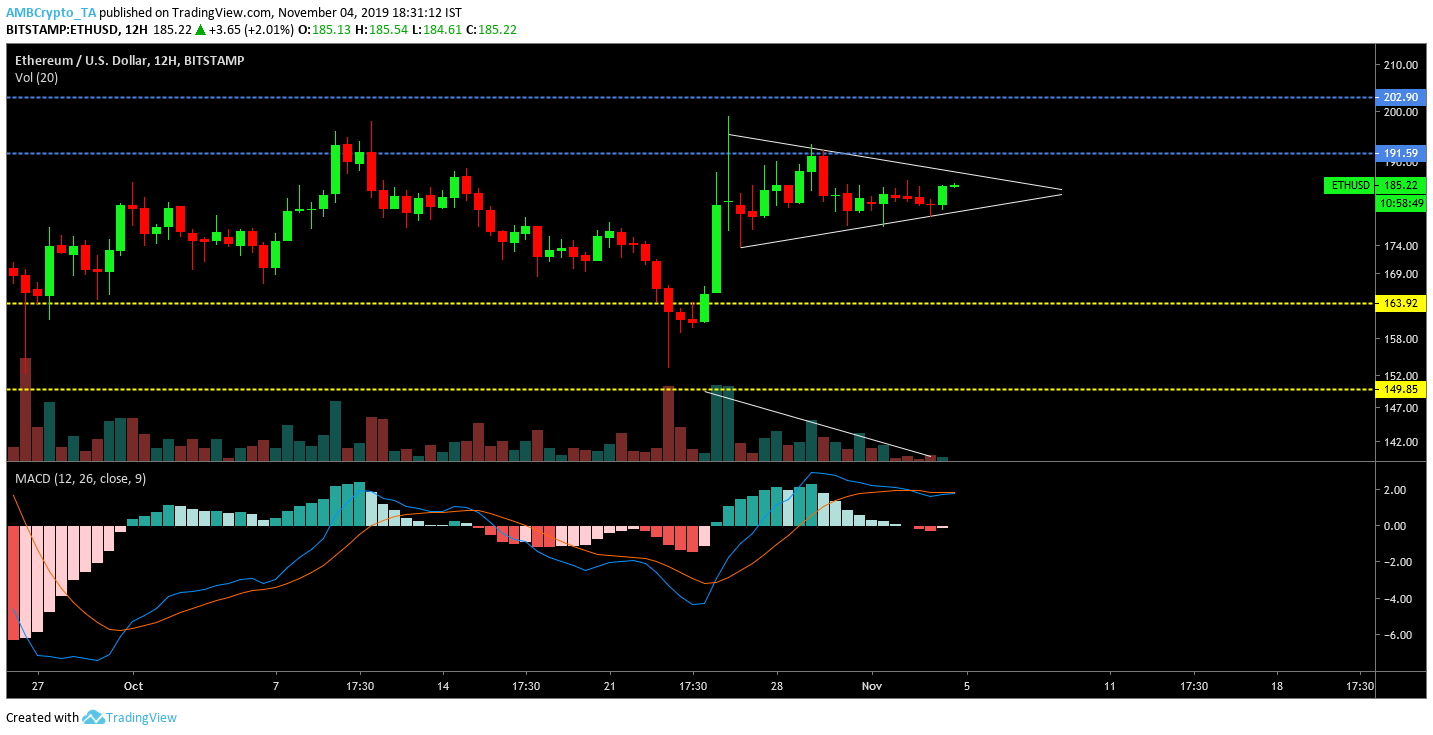 The 12-hour chart for Ethereum pictured a massive hike on 25 October. Since then, however, the token has not undergone any major price swing. However, the price movement for ETH gave rise to a symmetrical triangle pattern, solidifying ETH’s present consolidation period. The possibility of a bullish or bearish breakout was equally divided and the decreasing trade volume suggested that the breakout was imminent.

At first glance, in case of a bullish breakout, the immediate resistance would be placed at $191.90 and $202 for Ethereum, whereas the long term support at $163,92 should hold strong, in case of rapid depreciation.

The MACD indicator and the Signal line remained in proximity, suggesting that the trend was unclear on the charts. 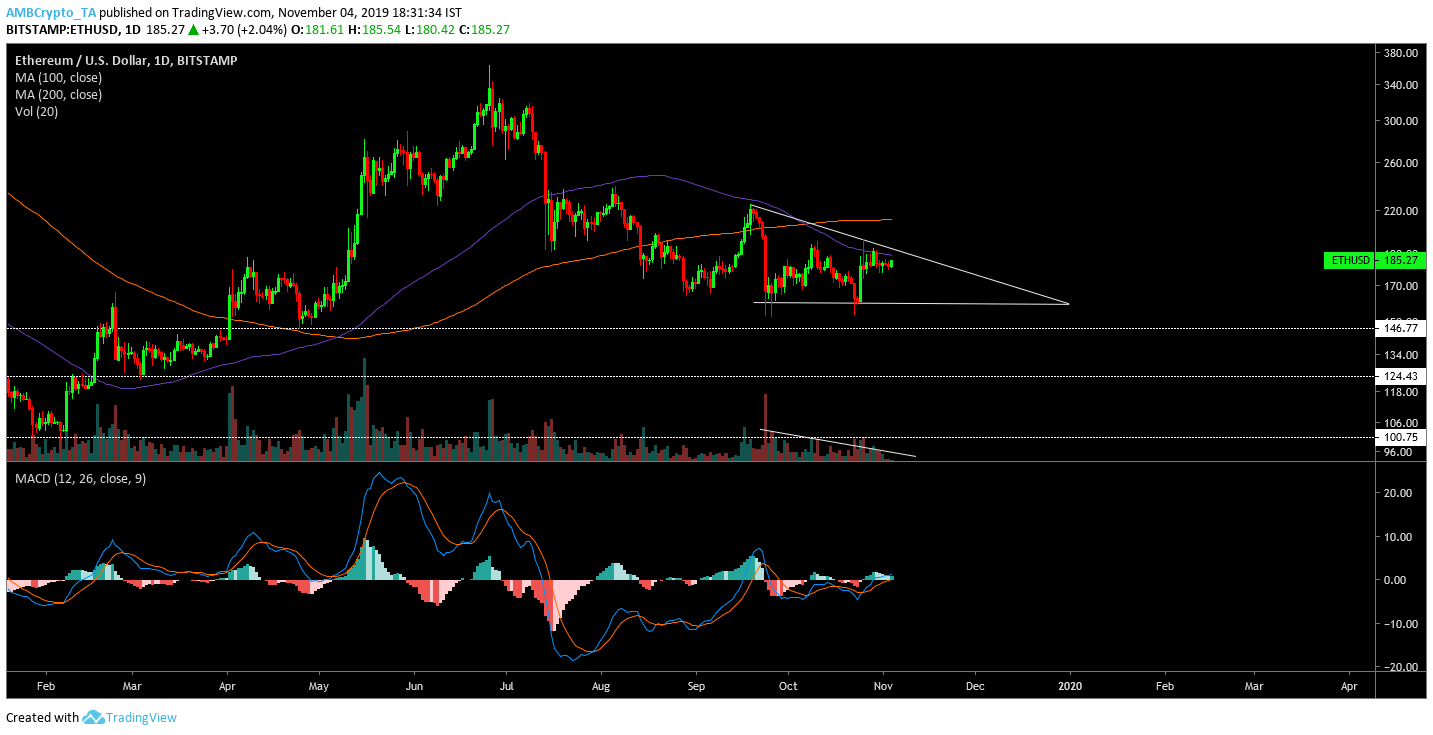 The 1-hour chart for Ethereum provided more clarity as a clear descending triangle was observed. The descending triangle suggested that a bullish pullback was on the cards for the 2nd largest token and major supports were placed at $146.77, $124.43 and $100.75. It was unlikely for ETH to drop down to $100 as market momentum was low, at press time.

A major bearish sign was observed between the 100 and 200 Moving Average, as the 200 MA completed a bearish crossover. The decreasing trade volume confirmed the validity of the descending triangle pattern as major traits turned bearish on the charts.

The MACD was bullish in the long-term chart for ETH. However, other indicators suggested that a trend reversal would be imminent.