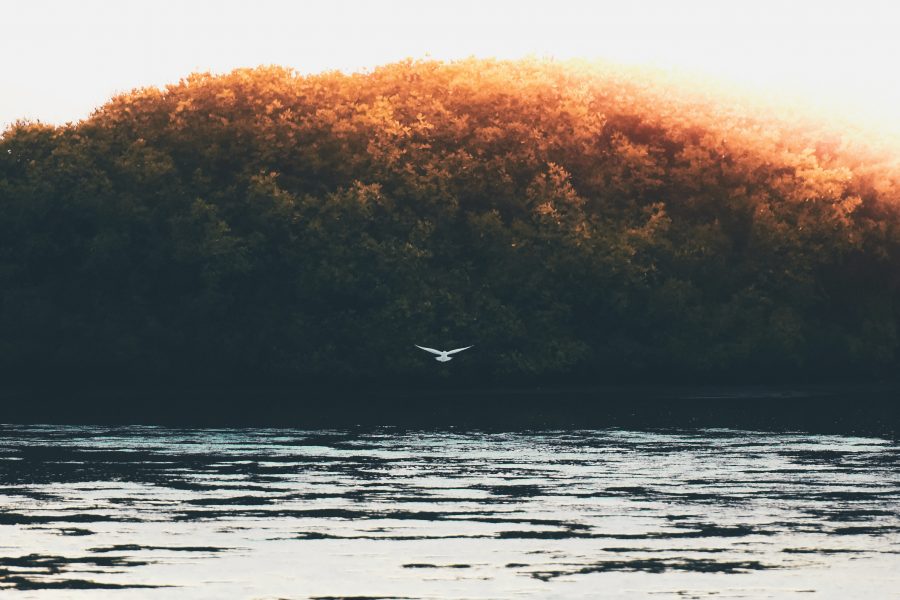 Like change and tax, some things are just inevitable. Anthony Pompliano will continue to ring in his “Long Bitcoin, Short the Bankers,” motto, Nouriel Roubini will find another aspect of the crypto industry to rant about and Justin Sun, will just not shut up about Tron. The latter is where the crux of this piece lies, and as he would like it, the focus is well and truly on Justin Sun.

The master-marketer, Justin Sun established himself as the “poster child,” for everything the cryptocurrency world does not want to (at least in principle) be. Cryptocurrency, in its very core essence, was always meant to be “decentralized,” detached from a source, a controller, an authority, not merely on the question of power, but also in the question of appearance.

Satoshi Nakamoto, the mysterious anonymous persona who built Bitcoin, penned the whitepaper and briefly appeared on several Bitcoin talk forums, did so to make sure that his identity is not conflated with the cause that his product was meant to serve. Essentially Bitcoin was created to be the opposite of what Tron is today.

Tron, a regular in the top-10, amassed over $1.5 billion in capitalization, with its coin TRX making the rounds on crypto-Twitter. However, in the TRX community, one would often get blindsided in the glare that reflects off of Justin Sun.

Tron Foundation CEO made his mark within the community, building up Tron and TRX as the next big thing in the decentralized currency world, consistently promoting the acquisitions, adoptions, and adulations received in a bid to hype up the community. To be fair, this tactic has been employed by several company leaders, and you would be quick to dismiss the argument as “nothing new,” but Sun’s sell is quite unique.

To juxtapose, Bitcoin is what it is today, in part, because Satoshi Nakamoto kept his identity a secret, while Tron, is known for one thing and one thing only, Justin Sun.

In some cases, his PR antics are nothing short of a reality show, making for interesting headlines and TRX pumps, but it does point to an interesting pattern for how he goes about the promotion, fronting himself and letting the network and digital asset follow-on. While TRX’s actual performance and used-case have been questioned by many analysts, its name-and-fame, however, is relentless, with the credit going entirely to Justin Sun.

Justin Sun’s PR strategy is primed on a consistent road map – Table a [false] promise, let the hype build, ride a marketing wave on the same, make good on the promise [partially], and walk away with a pumped TRX and the community, for better or for worse, conversing about Tron.

Marketing over Everything Else

Justin Sun’s persona as a marketing mogul and the desperate need to curate an image and a brand, from which the product can be sold has been going about since his early days in China. From announcing that he ‘measures,’ a person by ‘how much money he’s made,’ to being the equivalent of a teenager on social media, Sun is all about the outward appearance.

Several Chinese entrepreneurial mainstays do not have the most flattering opinion of Justin Sun. Xiaolai Liu, a domestic Bitcoiner from China, called Sun a cheater, Xiaochuan Wang, a technology entrepreneur, and the CEO of Sogou, a Chinese search engine called out Tron in a heated interview. Wang, like many others, stated that he ‘hasn’t seen anything,’ from the Tron CEO and so far, ‘its all your words.’ This was only the start of Justin Sun as a master-marketer.

Sun’s “Tesla Tale” went through the same path. In order to celebrate the success of TRX, BTT and the recent USDT partnership, Sun tweeted, on March 12, that Tron would provide a “$20 free cash airdrop,” and, additionally, he would “randomly pick,” a winner to receive a Tesla, not specifying the model or metrics of the same.

Following several ‘bot accounts,’ 88 to be exact, receiving the airdrops and the winner of the prized ‘Tesla,’ @uzgaroth, being announced as the winner and even disseminating his contact details to Sun for the prize, the Tron CEO backtracked. Due to the controversy around the “selection process,” Sun intended on sharing the “selection process for transparency,” however, the “size of the video,” was too large for Twitter to upload it. He later added,

“For full community transparency, we decided to cancel the previous result and so a live stream draw instead.”

The “winner,” @uagaroth even questioned whether this ‘Tesla promise,’ was a “scam,” fronted by Justin Sun and Tron.

However, two months later Sun did make good [almost] on his promise awarding not a Tesla, but the USD equivalent. He offered $28,000 to @LeoHuynhPro, who, surprise surprise, converted the entire amount to Tron, while @uzagaroth was also given the same prize amount. Although, the crypto community did question if $28,000 was really equivalent to the price of a Tesla, with the cheapest being priced in the range of $35,000.

Regardless, Sun’s bait-and-switch tactic did work once again, riding yet another subverted marketing success, this time in a Tesla.

In April, Sun tweeted that the English Premier League football club, Liverpool F.C. and Tron were “exploring,” a “partnership.” The video, attached to the tweet, showed the logo of the two parties, in what the Tron CEO called a “unique and innovative invitation.” Misha Lederman, a prominent member of the cryptocurrency community, and co-founder of IAMDecentralised event foresaw the “the TRON logo on that red @LFC shirt at Anfield.”

Well, the partnership, was short-lived, less than a day after the “announcement,” was made, a spokesperson with the football club denied the “partnership,” adding that it was a strategy to understand companies business better.

Think back to the most rivetting controversial lunch date, that never happened [for now] in the cryptocurrency world. Back in June, Sun bid $4.6 million at the Glide Foundation’s annual charity auction for lunch with Berkshire Hathway CEO Warren Buffett, and soon, he had the focus of the global cryptocurrency audience.

Since the charity lunch was confirmed for July 28, in San Francisco, Sun began tweeting about the questions he should ask, the people he should invite, and the ideas he should propagate during the lunch, leading to an unnecessary show and tell on Twitter.

With many questioning the cost-benefit of the lunch, the marketing that Sun, and to some extent Tron received was no passing matter. Several prominent mainstream media outlets picked up the news, which also affected the coin’s price. TRX shot up by over 25 percent during the period of the announcement, touching $0.040, its highest mark in over 12 months. 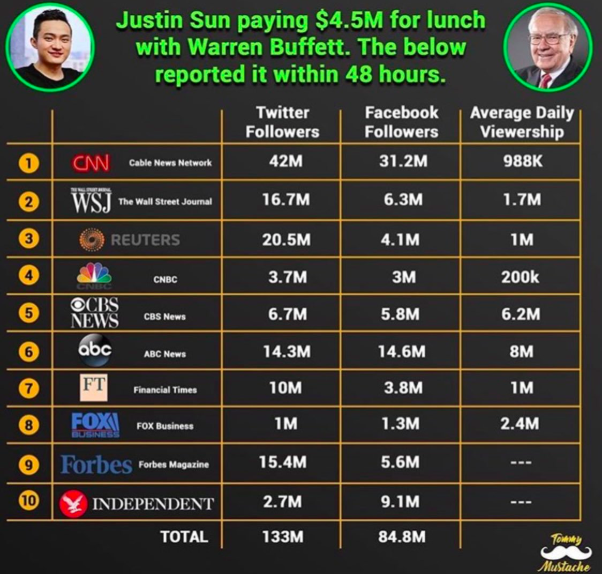 The marketing-snowball began, and the hype building while the cryptocurrency community would have to get used to almost two months of ‘Guess who I’m having lunch with,’ from Justin Sun.

In anticipation of a presumable price drop or even a Buffett-backlash, Sun, after he invited personas like Charlie Lee, Jeremy Allaire, Yoni Assia, and Helen Hai decided to drop the lunch, initially citing medical reasons due to “kidney stones.” However, it was later revealed by Chinese media outlets that the Tron CEO was under-investigation by China’s border control list. To muck up the situation, even more, Sun confirmed that he was in San Francisco, posting a video with the Golden Gate Bridge in the background and even attended a Tron meetup later.

To be fair, Sun did issue an apology on Weibo for his “over-marketing,” of the Buffett lunch, but perhaps it was just an after-thought in what has been a long career in the cryptocurrency industry of showing face, over anything else.

Related Topics:LiverpoolNewsTeslaTRONWarren Buffett
Up Next